Small right bank island on the site of Sansom's ford, 2 Km above Newbridge.

1 Km below Shifford Lock where the Great Brook joins

The River as you ascend above New Bridge becomes suddenly narrow and winding, and is sometimes badly choked with weed. I remember in the summer of 1906, when the Conservancy had been more than usually busy, that it was as difficult to force my craft through the floating clots of severed growth just here, as I imagine it must be through the famous Nile sudd.
You may have noticed, indeed, how considerably deeper and broader the Thames is immediately below the junction of the Windrush. Undoubtedly the inflow of the little stream is a large cause of the remarkable difference; but I think also that the River bed must have received much more preparation for traffic below than above.

The flash mark of Langley's Weir is too low;  craft are thus hindered in passing over 'Shifford Hill'

Shallow places in the river are often referred to as 'hills'.
1832: Fearnside -

Limbre's Weir is rather picturesquely situated; and from the compressure of the current, there is generally a fall of water, forming, in the rainy season, a kind of cascade, dangerous, without due caution, to small boats.

Just a mile higher [than Newbridge] is the site of an old weir, perhaps Limbre's or Daniel's ... The stones are still visible on the Right bank where the water widens to the pool.

You may still see what I conjecture to be remains of old stonework if you search the Right bank at the head of the well defined pool about three quarters of a mile above New Bridge, just against the first slopes of Harrowdown Hill.  A charming and secluded spot;  the surviving stonework so hidden behind festoons of creeper and bramble and the tall reeds that you would not notice it unless specially searching.

At the head of a poplar island about half a mile above Limbre's Weir, and a mile and a half below Shifford Lock.

Only a fishing place.  Can't shut in now.  Should all be swept away.

1829: In very bad repair.
1853:  All that remains of this weir is part of the sill and some stones.
1876: The Severn Canal Company complains that their tug, drawing three feet and six inches, could not proceed past Old Shifford because of the shoals.

I think from several scattered indications, that the old flashlock was about three quarters of a mile or more below the present [Shifford] Lock, close to the junction of the Great Brook.

Below Shifford Lock there is an entry into the weir stream under a footbridge. Craft less than 25 feet long can navigate as far as Duxford Ford (nearly one mile).

on the modern weir stream, immediately below the hamlet. 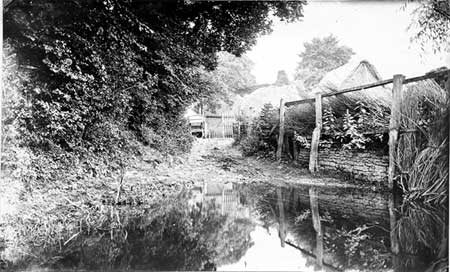 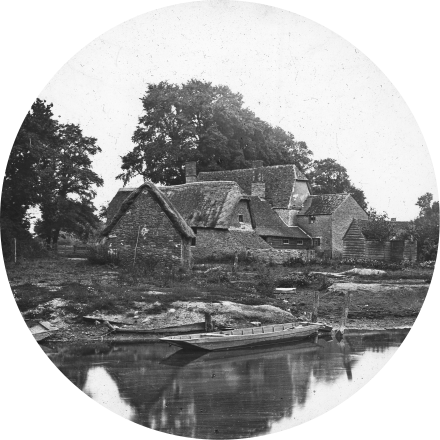 Duxford, called Dudochesforde in Domesday, lies up the backwater at Shifford Lock; ...
The backwater is a pretty, winding channel, much too thickly grown with reeds and waterlilies for anything but a light canoe to navigate. You may walk however, by the old towpath along to the hamlet, and will be delighted with the wonderful profusion of the lilies. Their whiteness contrasted almost fiercely with the black water darkened by the thunder wrack that stalked the heavens one heavy August day I was there.
In less than a mile you reach small quiet Duxford, where there was once a ferry over the backwater, formerly the main stream. But the craft, an aged woman told me, was swept away in the night during a great snowstorm years ago, and now you must walk to the lock to cross, unless you wade over. Before the lock cut was made you often had to take off shoes and stockings and shove over Duxford shallows.
Somewhere along the old navigation here, between the lock and the upper weir, was Samson's ford; and possibly Limbre's or Limbress was the original name of the upper weir. This ford may have been the one still traceable just before you reach the first houses as you walk up the towpath. Taunt seems to mark a second vanished weir, perhaps at the wide pools just below them.