Village on Right bank, 1.2 miles.
This section in The Stripling Thames by Fred Thacker 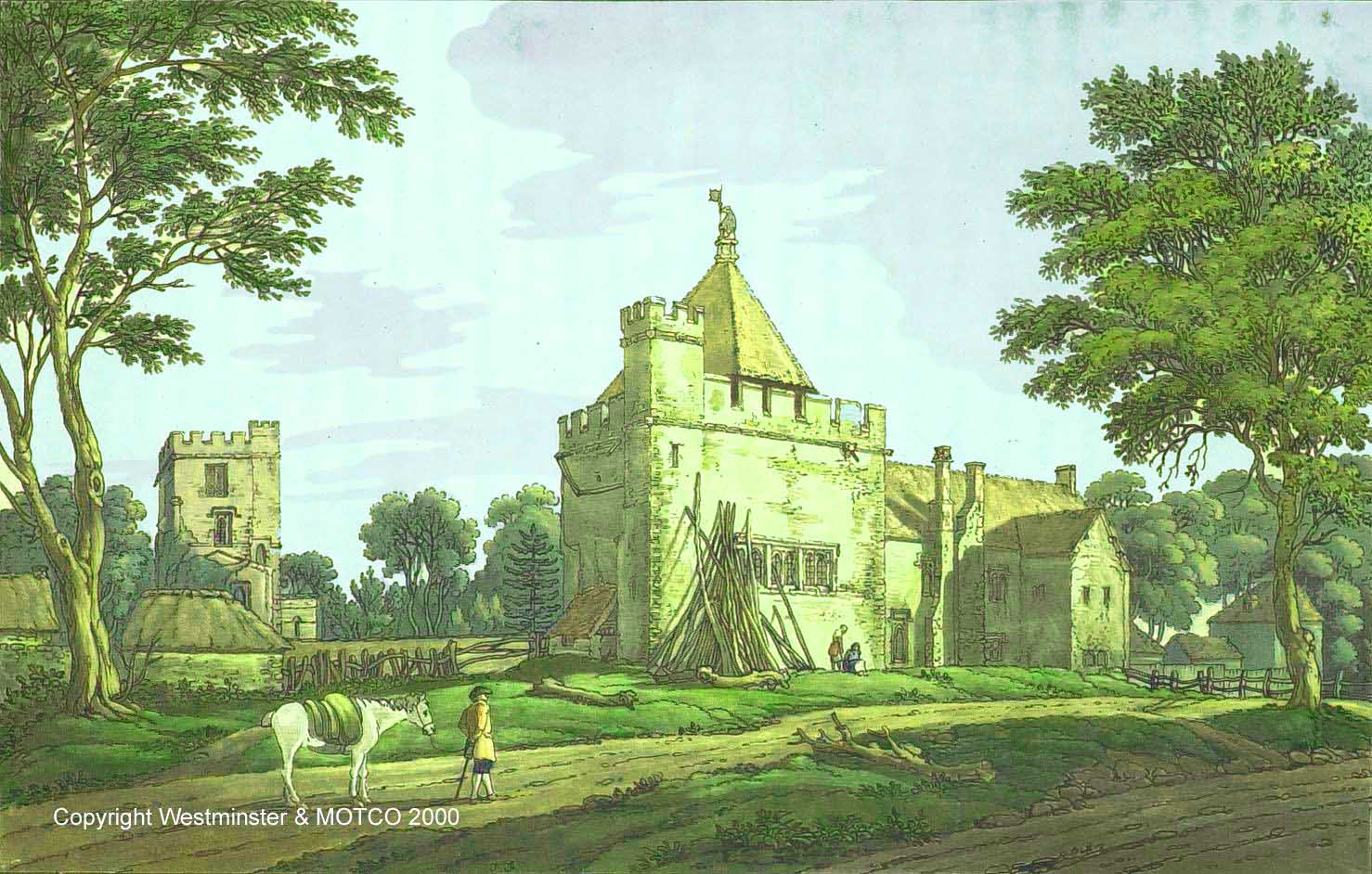 It was in the early 1700s that Alexander Pope was there, hard at work on his Homer.
Sir Joshua Reynolds said of Pope -

afflicted with constant headaches, sometimes so severe that he could barely see the paper he wrote upon, frequent violent pain at bone and muscle joints...shortness of breath, increasing inability to ride horseback or even walk for exercise....

I have a mind to fill the rest of this paper with an accident that happened just under my eyes, and has made a great impression upon me.  I have just passed part of this summer at an old romantic seat of my Lord Harcourt's, which he has lent me;  it overlooks a common field, where, under the shadow of a haycock, sat two lovers, as constant as ever were found in romance, beneath a spreading beech. The name of the one, let it sound as it will, was John Hewett, the other Sarah Drew.
John was a well-set man, about five-and-twenty;  Sarah a brown woman of eighteen.  John had for several months borne the labour of the day in the same field with Sarah;  when she milked it was his morning and evening charge to bring the cows to her pail.  Their love was the talk, but not the scandal of the neighbourhood, for all they aimed at was the blameless possession of each other in marriage.
It was but this very morning that he obtained her parents consent, and it was but till the next week that they were to wait to be happy.  Perhaps this very day, in the intervals of their work, they were talking of their wedding clothes, and John was now matching several kinds of poppies and field flowers to her complexion, to make her a present of knots for the day.
While they were thus employed (it was on the last day of July), a terrible storm of thunder and lightning arose, and drove the labourers to what shelter the trees or hedges afforded. Sarah, frightened and out of breath, sunk on a haycock, and John (who never separated from her) sat by her side, having raked two or three heaps together to secure her.
Immediately there was heard so loud a crack as if heaven had burst asunder.  The labourers, all solicitous for each other's safety, called to one another; those who were nearest our lovers, hearing no answer, stepped to the place where they lay.
They first saw a little smoke, and after, this faithful pair John with one arm about Sarah's neck, and the other held over her face, as if to screen her from the lightning.  They were dead.  There was no mark or discolouring on their bodies, only that Sarah's eyebrow was a little singed, and a small spot between her breasts.
They were buried next day in one grave, in the parish of Stanton Harcourt, where my Lord Harcourt, at my request, has erected a monument over them.

Pope himself provided the epitaph - 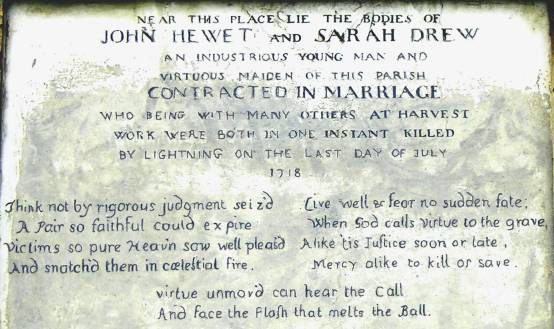 1909: In the Stripling Thames Fred Thacker commented on the size of the lettering "CONTRACTED IN MARIAGE" -

Was it necessary by the size of the lettering to arouse quite such furious speculation? for the poor creatures were subjected after their death to much scandalous talk. Pope wrote in a letter that "a young man and woman were lately destroyed here by lightning; and the country people are hardly in charity with their minister for allowing them Christian burial. They cannot get it out of their heads but it was a judgement of God."

When Eastern lovers feed the fun'ral fire,
On the same pile their faithful fair expire;
Here pitying heav'n that virtue mutual found,
And blasted both that it might neither wound.
Hearts so sincere th'Almighty saw well pleas'd,
Sent his own lightning and the victims seiz'd.

Think not by rig'rous judgement seized,
A pair so faithful could expire;
Victims so pure heav'n saw well pleas'd
And snatch'd them in celestial fire.

Live well, and fear no sudden fate;
When God calls virtue to the grave,
Alike 'tis justice, soon or late,
Mercy alike to kill or save.
Virtue unmov'd can hear the call,
And face the flash that melts the ball.

That last line - no, no surely not, not in the 1700s, they were innocent then, and yet Alexander Pope then wrote to Lady Mary Wortley (whose husband had been ambassador to Turkey until, as Edith Sitwell says in Pope's biographyit was felt the Turks had suffered enough),
and challenged her to do better.  She replied with an epitaph with certainly one very crude line.  She was not a romantic -

Here lies John Hewett and Sarah Drew;
Perhaps you'll say, what's that to you?
Believe me friend, much may be said,
On this poor couple that are dead.
On Sunday next they should have married;
But see how oddly things are carried!
On Thursday last it rained and lighten'd,
These tender lovers, sadly frighten'd,
Shelter'd beneath the cocking hay,
In hopes to pass the time away;
But the bold thunder found them out
(Commission'd for that end no doubt);
And seizing on their trembling breath
Consign'd them to the shades of death.
Who knows if 'twas not kindly done?
For had they seen the next year's sun,
A beaten wife and cuckold swain
Had jointly curs'd the marriage chain;
Now they are happy in their doom,
For Pope has writ upon their tomb.

Mind you Pope himself could compete in the non-romantic stakes -

Here lie two poor lovers, who had the mishap
Although very chaste people, to die of the Clap!

The poet then quotes the epitaph he had written to their memory — lines not worthy of him, and which still stand in the churchyard just above their grave. A few words more and our quotation is at an end.
"Upon the whole, I cannot think these people unhappy; the greatest happiness, next to living as they would have done, was to die as they did. The greatest honour people of this low degree could have was to be remembered on a little monument, unless you will give them another — that of being honoured with a tear from the finest eyes in the world. I know you have tenderness; you must have it; it is the very emanation of good sense and virtue; the finest minds, like the finest metals, dissolve the easiest.'
Lady Mary's reply, unfortunately, proved how little she deserved this charming compliment. She had neither faith in, nor comprehension of, the nature and virtues of humble life; she tries her skill on the epitaph Pope half requested, and it lives as a record of her want of sympathy in the pure and delicate — a coarse lampoon. *
* Mrs. Sarah Josepha Hale, of Philadelphia, has published a very comprehensive and interesting memoir of Lady Mary Wortley Montagu, accompanied by some of her best correspondence.

[ Last time I punted past Stanton Harcourt in a heavy thunderstorm holding a 20 ft aluminium pole in wet hands this story was more worrying than romantic! ]