Right bank island 150m below Pinkhill Lock. The result of cutting across the neck of a horseshoe bend. Almost identical to the one above Eynsham Bridge.

The right bank in Pinkhill Lock

1909: Pinkhill Lock in The Stripling Thames by Fred Thacker

Two miles of winding water lie between Swinford Bridge and Pinkhill Lock.
Pinkhill it is, officially; but Pinkle to all the workaday world.
This little lock mound is the happy isle of the River country; a haven of dreams; the inner gate of a far off land whose elusive charm quickens the memory more frequently and tenderly than all the more popular and obvious beauties of the middle river. The great Wytham and Beacon Hills exclude for ever the whole outer world. Beyond them lies - Oxford? even London, perhaps; all unlovely hustling and the crowds. But the loud and brawling voices never surmount those sheltering heights; and on the hitherward side the deep meadows, emerald green beneath the purple woods, are broken only by the willowed banks of the immemorial stream. This scene of the sweet cunning earth is one to be cherished in the memory beyond the very gates of death.
And above all, the quintessential charm of Pinkhill is its arches of rainbows. Once for me a sudden shower trailed its filmy veil along these grassy levels, blowing up from the wet southwest. And the perfect bow was formed, so that the very blades of grass were transformed with the sevenfold glory; and above the bow shone its reflection hardly less refulgent. For others also there has been the vision; they too have watched from this River island the sudden epiphany of celestial colour. And therefore for them and for me it lives for ever arched in rainbows.

[ and Fred, who was something of a poet, wrote this about Pinkhill ]

No wet salt wind from off the sea,
Foam laden, loud with life, blows here;
No surges sound upon this lee,
No sea bird's cry wails on the ear.

The reeds that rustle in the breeze
Still whisper of the god's pursuit,
Slim Syrinx startled turns and flees,
Great Pan has shrilled his oaten flute!

She flees too late, the god has seen!
All hope is vain, save in the prayer
She breathes to heaven; and lo! the Queen
Turns to a reed the flying fair.

Where lonely meadows fringe the shore,
Or where dim woods the bank ascend,
Will old sweet things shew one sight more;
Are Pan and Syrinx at an end?

The listening ear at noontide heat
May it not hear his cleft foot stamp;
No laughter catch of Naiads sweet
In river grottoes cool and damp?

Between the dripping mossy walls
Of those old lock such thoughts arise:
The trickling water gently falls,
The gates are closed, there meets the eyes

Of aught beyond no cheering gleam,
The River's course unseen like Fate's:
To mimic grudging Time they seem,
These heavy slowly parting gates.

Right bank, weir stream side of the lock island. 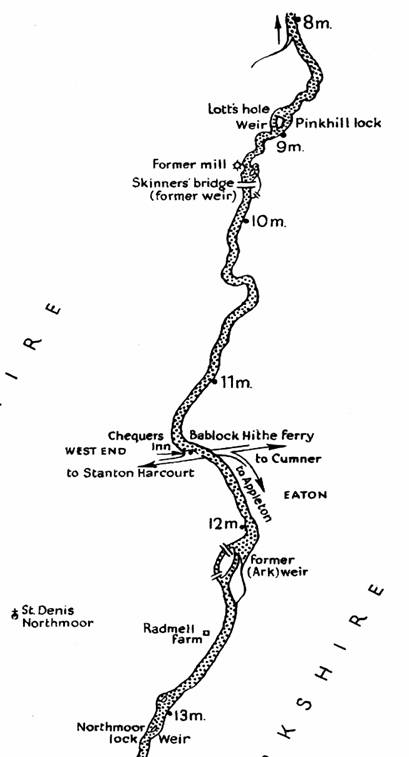 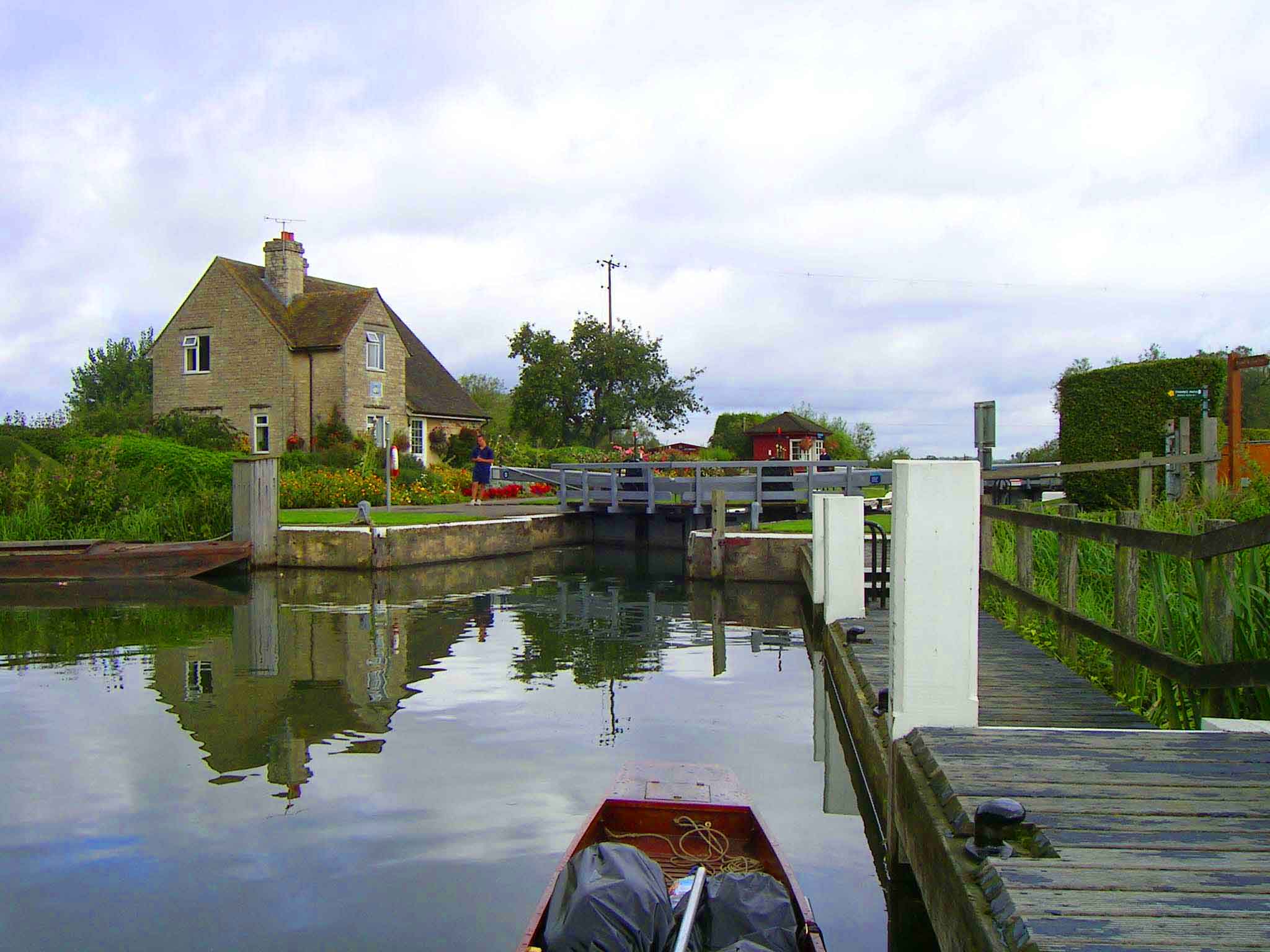 Of no kind of use in itself to the navigation, on account of the old weir of timber in the bed of the river being totally rotten and tumbled into the river, and seemingly deserted.

No toll house being attached, it is necessary for the aquatic tourist to be provided with a winch.

See Tredwell at Eynsham Lock House close to the bridge, as he will get Pinkle open for you. 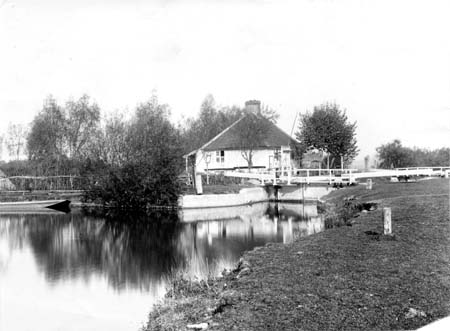 The weir is a new one, a great contrast in its severe and formal cut to the weather-worn structures [above here]. The lock-house is quite a dainty cottage, and the garden one of the prettiest along the Thames. The lock garden is generally a winsome little preserve, with its kitchen garden, flower-beds, sometimes a beehive, its stack of fagots, and a general air of rusticity; but the lock-keeper, or probably his wife, at Pinkhill Weir has devoted special care and attention to a flower-bed running the whole lengh of the lock, which I found to be bordered by a blaze of summer flowers, prominent amongst which were white and blue cornflowers. From the lock bridge a commanding view is obtained of the hilly country to the right, and the woods and copses around its base, and straggling to the top.

Pinkhill Lock has had several lock-keepers over the years, but one notable one was Mr Henry Smith who lived there with his family from 1908 to 1939. Mr Smith, as well as being an excellent lock-keeper, was also a wonderful gardener and for several years won the first prize of £2 for the best-kept garden between Osney lock, Oxford, to St John's lock at Lechlade.

H. Smith, Pinkhill Lock Keeper from 1909, has entirely changed the appearance of this lock island. Once a rambling wilderness of a garden, full of vegetable patches and familiar old world flowers, crowded in summer with scores of campers, it is now like a County Council parterre with sloping banks of shaven turf whereupon I have hesitated to tread in leaving my craft, seeing the orderly geraniums, perhaps the merest suspicion out of place in these surroundings, and but a decorous handful of the merry old rout. And so he had the prize in 1910, which for long went to Mr. Williams at Radcot, but also the challenge cup for the best kept lock on the whole river.

1932: The old paddle and rymer weir was demolished in 1932 to make way for a Buck weir (using gates that rise vertically on upright runners both sides)
1937: "The Thames and its Story" -

From Pinkhill Lock (so called from a farm of that name in the neighbourhood) a commanding view is obtained of the hilly country [ on the LEFT bank ], and the woods and copses that lie thickly round its base and straggle to the top.

1998: The Buck weir was replaced by a new electrically operated radial weir