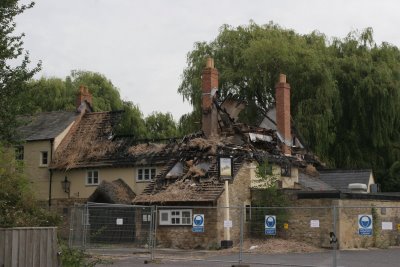 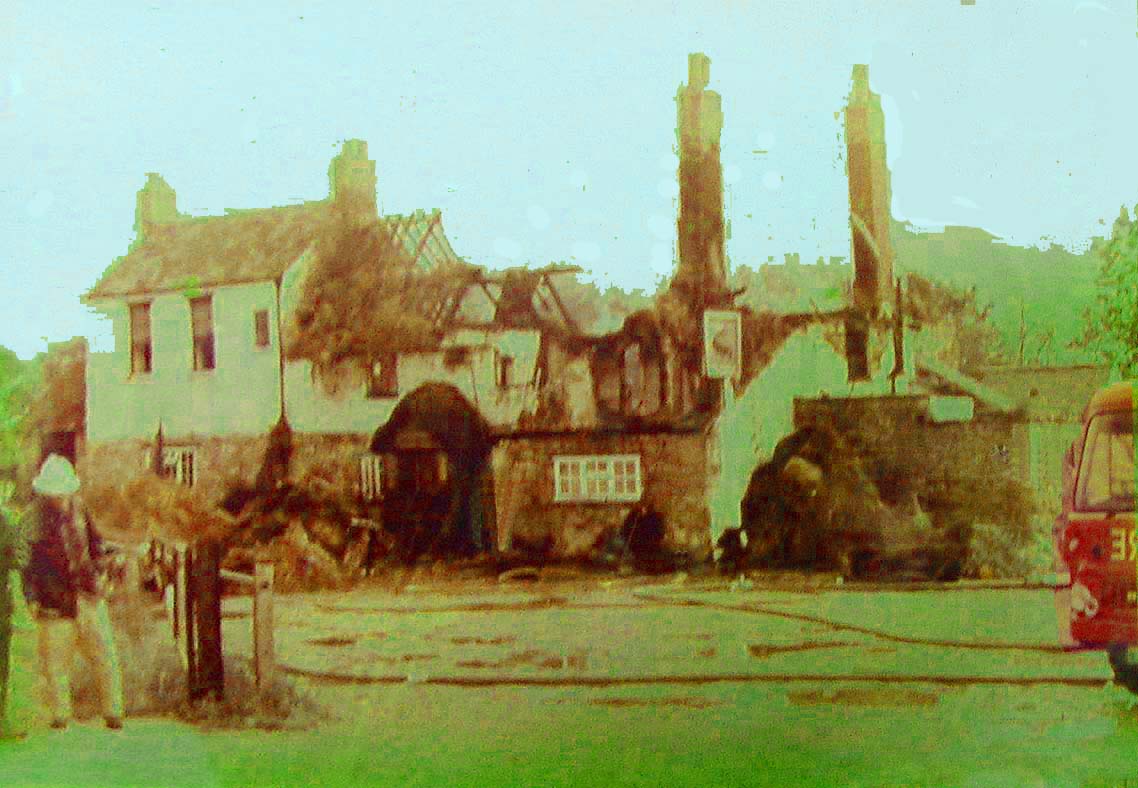 2008: September - The Perch reopened after the fire

Moorings on LEFT bank.
Tying up here you then walk the hundred yards or so straight into the pub garden. Good food. Children's Playground.
The Perch, which is owned by Christchurch College, dates partly from the 17th century.
1761: 20th July, James Woodforde, a scholar at New College wrote in his diary -

At Binzey for victuals and drink. I was in the water coming down 20 Times.
At skettles with Bell at Binzey; won 1 - 0 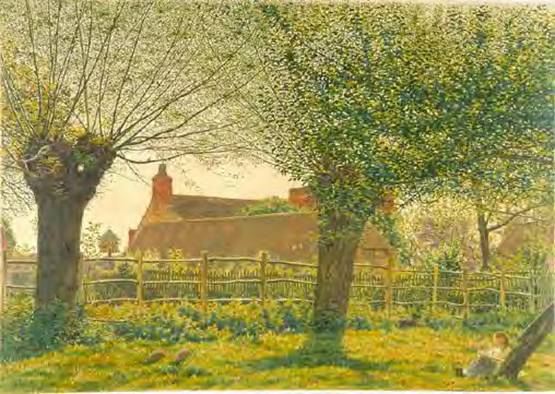 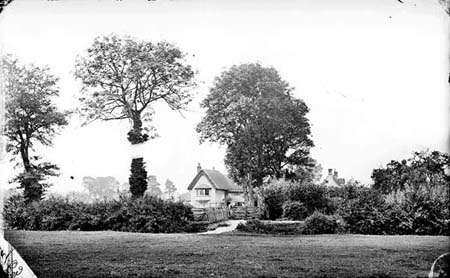 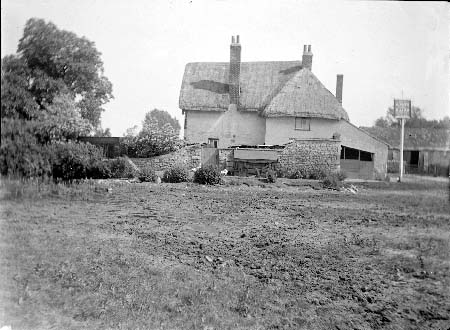 At the church in Binsey is the holy well known as the Treacle Well (i.e. Healing Well) which is sufficiently strange as to be mentioned in Alice in Wonderland.

"Excuse my ignorance",
a visitor said one day to the jolly landlord and his wife at the Perch,
"but where are the Binsey treacle mines?"
And the roar of laughter that went up was Titanic. By no less a title does local humour christen the mud holes that winter rains and floods leave in the neighbouring roads and footpaths.
They say too, that the inhabitants of the little place, so idyllic in summer, will reply, if asked where they live:
"At Binsey! Where do you suppose?" when sunny days are with them.
But in winter the groan goes up at the same question: "At Binsey, Lord help us!"

At the west end of this chappel, about three yards distant, is the well or spring, antiently and to this day called St. Margaret's Well, being the very same that she by her prayers at the building of the chapple opened. Of which heare a certaine old English poet, who in the life of St. Frideswyde in the legend of English saints, speaking of her various fortunes and of her passage from Bampton to this place, saith thus:

Ther fer with her felaisis [fellows]. she be laft ther
And to serve Jhesu Christ . a chapel leet arere [raise]
Ther as is yit a fayr cort . and a cherche fayr and swete
Arerid in the honour . of her and Seynte Margrete
As this mayde wonyd [lived] ther . in holy lyf and clene
The maydenes that were with her . gone hem ofte be mene [bemoan]
That water was sum del to fer . hem ofte for smale dede
And cride on Seynt Friswid . that she schold hem therof rede [rid]
This mayde Seynt Friswid . bad our lordis sonde
That he water thorw his gras . hem sente ner honde
So sprong ther up a welle . cler inowf [enough] and clene
That fond hem water inowf . tho dorst hem nought be mene[bemoan]
That beside the cherche is yit [it] . in the west syde
That mony a mon hath bote do . and that men seggeth wide.

There are other stories - though the nineteenth century enthusiasm for them has rather obscured any genuine medieval stories, to the point where we cannot be certain of any detail.

In the Church of St Frideswide, Osney, is a door carved by Alice Lidell (the Alice of Alice in Wonderland). It depicts St Frideswide's arrival at Binsey, before the miracle of the "treacle well".
Alice was a pupil of the Pre-Raphaelite John Ruskin. 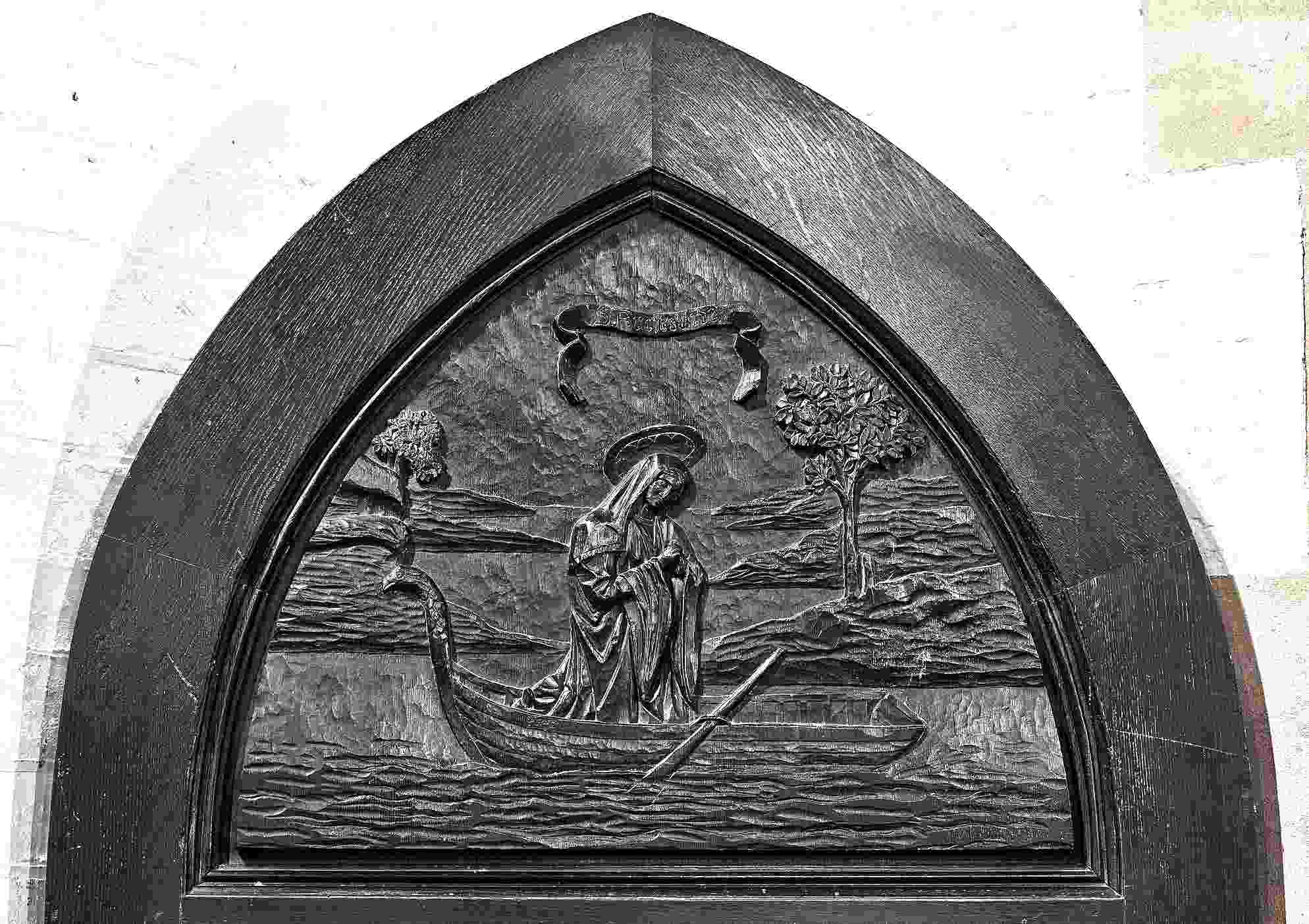 ... Binsey is still unspoilt and its prospect of Port Meadow viewed from its yellow public house, is the best view of Oxford to be had from the West.
Further down the lane is the little church, and a once famous holy well beside it. Here a ritual has been devised. Drop a small stone into the well and ask yourself a question. Walk into the church without saying anything and open the Bible on the lectern. The first verse you see will give the answer to your question.
Wytham and Binsey are the less hackneyed of Oxford's lost causes on the edge of Oxford. I have a fear that they will not be lost much longer.