The right bank narrow island between the river and the marina.

The foundation originated in the pious beneficence of Robert D'Oiley, nephew of the first of that name, who, in 1129 established it as a Priory of Augustinian Monks, and dedicated it to the Blessed Virgin Mary.
The Priory was speedily elevated into an Abbey, and although not mitred, became one of the richest and most magnificent in the kingdom. Its buildings, especially the church, were extensive and splendid, almost beyond example.
The church stood on the eastern side of the quadrangle. It was a large and very beautiful structure, containing within it many chapels, and no fewer than twenty-four altars. It was also adorned with two noble towers, one in the centre of the building, and the other, in which were the famed bells of Oseney, at the west end.
The following story relative to the immediate occasion of its being founded is copied from Sir John Peshall's work:-

Edith, wife of Robert D'Oiley, the second of this name, son of Nigel, used to please herself, when living with her husband at the castle, with walking here by the river side, and under these shady trees; and frequently observing the magpies, gathered together on a tree by the river, making a great chattering, as it were, at her, was induced to ask Radolphus, a Canon of St. Frid, her confessor, whom she had sent for to confer upon this matter, the meaning of it.
"Madame", says he, "these are not pyes ; they are so many poor souls in purgatory, uttering in this way their complaints aloud to you, as knowing your extensive goodness of disposition and charity" ; and humbly hoped, for the love of God, and the sake of her's and her posterity's souls, she would do them some public good, as her husband's uncle had done, by building the Church and College of St. George.
"Is it so indeed", said she, "de pardieux. I will do my best endeavours to bring these poor souls to rest" ; and relating the matter to her husband, did, by her importunities, with the approbation of Theobald Archbishop of Canterbury, and Alexander, Bishop of Lincoln, and consent of her sons Henry and Gilbert, prevail on him to begin this building there, where the pyes had sat delivering their complaint.

Osney Abbey was probably behind the Marina as seen from the river, until Henry VIII decided to embark on an ambitious project of nationalisation (or should that be privatisation?). It was a building that would have dominated its surroundings - larger than any college -

Seated on a flat or low ground, but for the grove, and trees, and rivulets that encompassed it not a little pleasant.

At a time when anti-Jewish feeling was at its height, a young Christian Deacon called Robert, a student of Hebrew at Oxford University, decided to become a Jew.
He had himself circumcised, changed his name to Haggai, and married a Jewess. When asked by the Church authorities to account for his conduct, he is reported to have said:
"I renounce the new-fangled Law and the comments of Jesus, the false prophet".
His outspokenness cost him his life and he was burnt alive for heresy.
His courageous stand and his suffering are commemorated on a plaque on the only surviving wall of Osney Abbey, which is to be found in the boat yard of Osney Marine Engineering Company at the end of Mill Street.

Near this stone in Osney Abbey,
Robert of Reading,
otherwise Haggai of Oxford,
suffered for his faith
on Sunday 17 April 1222 AD,
corresponding to 4 IYYAR 4982 AM.

Memorial to Robert of Reading, Haggai of Oxford, 1222

Other Oxford martyrs were Hugh Latimer, one time Bishop of Worcester, Nicholas Ridley, Bishop of London, and Thomas Cranmer, Archbishop of Canterbury, burnt alive for their faith in 1555 and 1556. 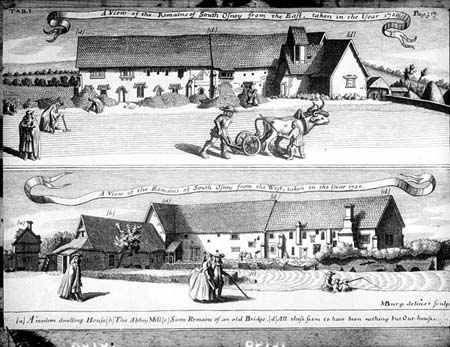 Osney, or Ouseney, Abbey, once rivalled in extent and architectural beauty the grandest of the colleges that now adorn and dignify the proud city. It was "seated on a flat or low ground, but for the grove, and trees, and rivulets that encompassed it not a little pleasant." It received its first erection in 1120, by the donation of Robert D'Oyly, at the instance of his wife Edith; and the legend is, that often, when walking out of Oxford Castle by the river-side, she observed magpies chattering on a certain tree, "as it wer to speke to her"; much marvelling at this, she asked of her confessor the meaning thereof, who told her they were not pies, but so many poor souls in purgatory, who were complaining to her, and entreating of her some good. Thereupon, and for their relief, she procured the building of the abbey where the tree stood; her "confessor", of course, becoming its abbot. During after-times, it was enriched by other donors, until it became "one of the first ornaments and wonders of this place, or nation"; to the great hall would often come, as guests, kings, prelates, and nobles of the first rank; whatever heart could wish the monks enjoyed, "by means of the generosity of their founders and succeeding benefactors"; the church was adorned by the gifts of the pious - all who contributed something towards the building being entitled to "forty days' indulgence and forgiveness from sin" - hence it became "the envy of other religious houses in England and beyond sea"; of architecture exquisite and full of variety; with hangings of most excellent work, windows of famous painting; with pillars elegant and uniform, each bearing a statue; with wonderful variety of carvings and paintings, "that not only fed the eye with delight, but struck the spectator with surprise and admiration." Of this grand and glorious work there is now not one stone remaining upon another; "it suffered not a little from the Rump Parliament", - Time did the rest, and -

Of it there now remains no memory,
Nor any little monument to see.

The abbots of Osney were peers of parliament. The last abbot was Robert King, who, in 1539, "surrendered" the abbey to Henry VIII. — who, in 1542, made it the see of a bishop, assigning Gloucester Hall, now Worcester College, Oxford, for his residence. In 1546 the episcopal chair was transferred to the conventual church of St. Frideswide, which was then constituted the cathedral of the see, and called Christ Church, and the last abbot and only bishop of Osney became the first bishop of Oxford. Of Dr. King there is a portrait in the library at Christ Church, the background of which is a picture of the abbey. Others of its treasures are also in that college- "Old Tom",' the famous Oxford bell, being one of them. Standing upon the site it occupied in the days of its power and grandeur, and searching in vain for a few stones to indicate its splendour, the mind is absolutely forced to ponder and reflect.
Although, no doubt, much was gained to religion and liberty by the suppression of monasteries, and we may rejoice that we no longer hear in our "schools"

The harsh jargon of contentious monks,

something was surely lost of intellectual supremacy. Osney shared the fate of so many wealthy establishments, which the cupidity, and not the piety, of Henry VIII. caused him to suppress. Although the friaries and the lesser monasteries were destroyed by law, the more powerful establishments were ruined by "surrender". By threats, cajolery, or bribery, the abbacies came into the king's hands, or under his control. Untractablc abbots were summarily disposed of by easily sustained charges of high-treason, and the monks were "sent adrift to dig, or beg, or starve". Osney revived somewhat in the days of Queen Mary, masses were again chanted within its walls; but during the Commonwealth its ruin was completed, and of its remains there is now nothing but the site, which the Thames waters as freely and abundantly as it did three centuries ago. 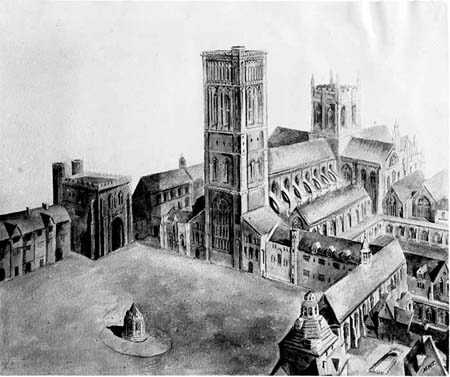 It was in 1538 that the monks of Osney, faced with instant dismissal and no redundancy pay - and no pensions - came up with their own pension plan. The gold and silver of the Abbey had been seized instantly before they could hide it. But one set of portable items of value remained - the bells. No one could easily make off with them - or could they? Working together the brothers lowered all but one of them to the ground and finally into a barge on the river. The barge crew were carefully chosen and they set off downriver.
They let it be known that just above Magna Carta Island they had had to drop the bells into the mud to avoid the king's troops - and one day they could be recovered and then the monks would get their money.
Trust monks to judge the credulity of fellow monks to a nicety!
"Aargh", would say the landlord of 'The Bells of Ouzeley" (just above Magna Carta Island) "they do say that mud there be bottomless!"
And when the river is in full flood and the beer flowing nicely -
"you can 'ere them bells - tolling, tolling ... " -
"Osney Abbey? Never 'eard of it. I was at Ouzeley Abbey, 'for I came out and married landlord's daughter." -
"Yes, up in Yorkshire - in the west country, right?" -

"Nice brass candlesticks we have - aren't they?"

The above insight into what really happened just came to me in the night! Christchurch inherited at least one bell, and this is all rubbish - or is it?

The Monks at Osney were Dominican Friar Preachers.

On 12th August, 1376, Edward III gave them "in so far as in him lies", a strip of water extending all along their bank twenty feet out into the stream, so that they might better protect themselves from its wash, "from which at times they suffered greatly". And the Sheriff and Mayor were to cause the waterward limit to be marked with stakes, "whereby it may for ever be known".

So as a loyal descendant of Edward III and probably most of his subjects, I will play my part - here, somewhere, is Preachers' Pool. The Preachers have gone but the name remains. 'Pool' suggests there was a weir, presumably the Abbey Mill Weir.