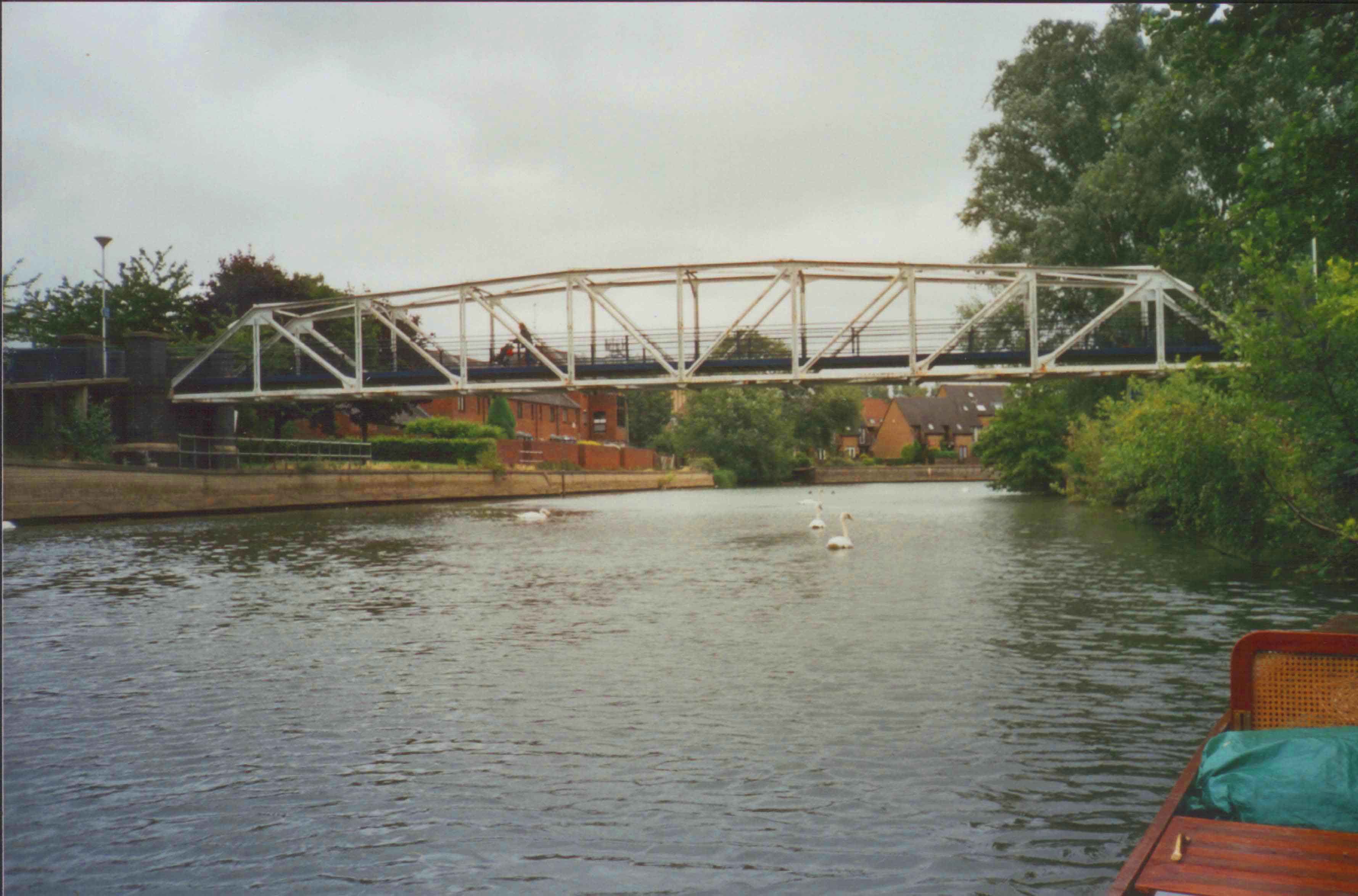 This bridge is now generally called 'Grandpont Bridge'.
I would be interested to hear if ever it was officially so called.
But it seems to me an inappropriate misnomer. 'Grandpont' was the old name for what is now 'Folly Bridge'. That was the 'Great Bridge'. No lesser bridge should assume the name.
'Grandpont' means 'Great Bridge' so 'Grandpont Bridge' is tautological - it is saying 'Great Bridge Bridge'
Ironic really when of all bridges it is merely a pathetic little girder!
The excuse was that 'Grandpont' now refers to an area, rather than to the old bridge, predecessor to Folly Bridge.
To confuse matters the old gasworks railway bridge which has been converted into a footbridge has also sometimes been called 'Grandpont' on the grounds that it leads to the 'Grandpont Nature Reserve'.
For these reasons I decline to call these girders 'Grandpont'. Tell me if I'm wrong.

1909: This section in The Stripling Thames by Fred Thacker

As you voyage upstream all the RIGHT bank, from Folly Bridge to Medley Weir, is stately in the imagination with the ghostly towers of departed monasticism.
The Dominicans, first in place, but second in time, possessed a settlement that descended to the RIGHT bank of the River immediately above the bridge, often flooded when the Thames was high.
They came into Oxford in 1221; and their pioneers were presented with their first site in the Jewry, where the municipal buildings now stand at the south-eastern corner of Carfax.
This soon proving too cramped the brethren moved about forty years later to this island (as it was then, and still is, though not very obviously), which Henry III granted them; and there continued until the Suppression, leaving not much mark, I think, upon Oxford except place names, the Blackfriars Road and the Preachers' Pool, the wide water just as you approach the gasworks bridge, where the southwest corner of their holding lay. They went the way of the rest, liked though they were by the people for their preaching.

It may be there is a sense of something lost and now lacking - but Oxford ignores this part of the river. We pass the not unattractive buildings that have been built too close to the river - and with their backs to it - and with no attempt at consistency. The river should be a green park through the city with attractive walks on both sides.
Pubs, restaurants and cafes would find the setting attractive and would be a self financing asset to the area. A necessary footbridge is a chance for some stylish architecture ... !
Date? I was told 1886 - but - in the sequence of maps this footbridge does not appear in 1900, or 1914-22, or 1938-44 -
(it is not on Berkshire VI.NE, revised 1938 published about 1944);
(it is not on Sheet 158 - Oxford & Newbury, fully revised 1956;);
(but it is on SP50 (includes Oxford) published 1960 (revisions 1936-56););
According to Wikipedia a 1930s aerial view of what it calls "Grandpont Bridge" appears in The Changing Faces of St Ebbe's and St Thomas, Book One ISBN 1-899536-17-5, page 29.
in 1977 Curl, James Stevens The Erosion of Oxford Oxford Illustrated Press. p. 117. ISBN 0-902280-40-6 says that it then only carried a utility pipe and lacked a walkway.
Perhaps this might explain its non appearance on maps - it was a pipeline originally, not really a bridge at all.
In which case naming it after the Grandpont area is even less justified.
Does anybody actually know who built it and when? 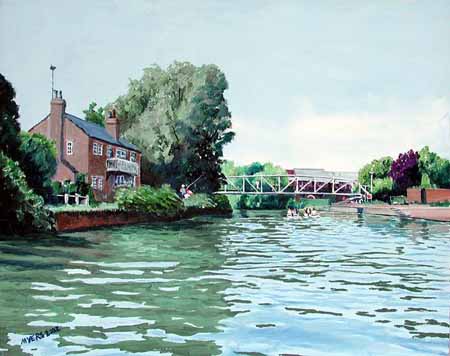