Somewhere around here was the ford, sometimes named "Stanford", ("Stone ford"), on the Port Way, the Roman road which ran South west to North east. This was one of the fords which gave Oxford its name (though my money is on a Roman ford near Folly Bridge) See the map of Anglo-Saxon Oxford on the Folly Bridge page
1954: Bridge first proposed in place of the ferry
1962: Opened by Viscount Hailsham.
Lord Hailsham's connections with Oxford include his having been (as Quintin Hogg) an undergraduate at Christ Church, a Fellow of All Souls (1931-38) and Member of Parliament for Oxford City (1938-50). His public life culminated in his being Lord Chancellor under the Heath administration (1970-74) and under the first two Thatcher administrations (1979-87)
There is an inscription on the bridge: 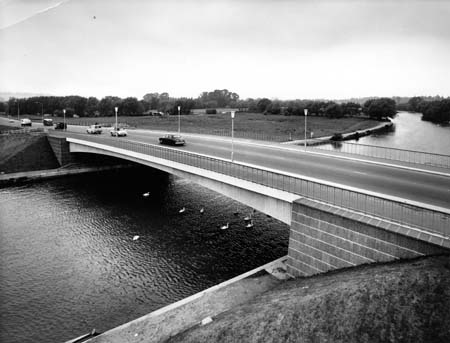 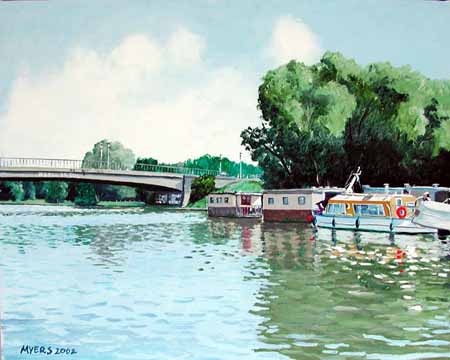 [ Donnington Bridge shows university graffitti at its greatest development - and it may even, in parts, be suitable for adult viewing. It does vary from year to year -
2004 is a bad year. The most humorous statement is
"My Mum rows for Linacre" My apologies of course if this is true.
2005 is worse, can students have grown up?
In my day we students understood we had a duty to society at large to represent immaturity in all its naffness. Sadly modern students appear to be disappointingly mature and normal. ]