IFFLEY: THE BIRTHPLACE OF HYPOTHESES!

1880: William de Morgan in The Expedition of the Ark.
On that webpage it is combined with the river excerpts from William Morris's "News from Nowhere".

The Francis Frith Iffley Photographs etc
The original reason for a weir here would be to power a water mill and catch fish.
1220-30: Ralph the Pontarius - bridge keeper at Iffley. This would have been presumably a bridge over a weir.

1497: Leonardo da Vinci probably did the design work which made the modern pound lock, with double gates, possible. The design below is for the lock at San Marco in Milan. The deceptively simple drawing is full of details for the mitre gate, which superseded the portcullis type of gate previously used. It shows the mitre and quoin posts, vertical wooden planks with horizontal and diagonal braces, iron sheathing for the joints, a brick floor underneath the gates, and a recess in the wall into which each gate folds. A detail of the paddles for letting water into and out of the lock is shown below the gate - 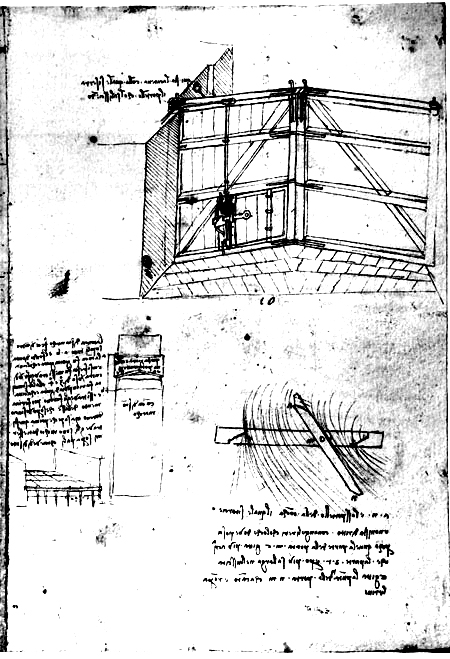 But I (from Oxford) down to Staines will slide,
And tell the rivers' wrongs which I espied,
Not doubting but good minds their powers will lend,
To_endeavour these abuses to amend:
Therefore I pray the Readers to dispense,
And pardon my abrupt intelligence.
From Oxford two miles Iffley distant is,
And there a new turnpike doth stand amiss,

[ Note that "Turnpike" which normally refers to a toll gate on a road, was also used of the new pound locks where tolls were collected. ]

1811 - three horse bridges were to be built as soon as possible over three "long and dangerous fords" which interupted the towpath between Iffley Lock and Folly Bridge..

1815: It is generally reckoned that the Oxford Bumping Races started in this year from Iffley Lock.
See Oxford Rowing before 1820 and subsequent pages (a history by decades)
Sherwood in Oxford Rowing, 1900, writes -

It was the custom with these early eights to row down to Sandford, and then return together to Iffley Lock. The boats were large ones, with a gang-plank running across the seats down the middle of the boat.
When the lock gates opened, the stroke of the head boat, who was standing in the bows with a boat-hook, ran down the boat, either along the plank or along the side, and pushed her out of the lock as quickly as possible, immediately taking his seat and rowing. The first boat was followed as quickly as possible by the second, and that by the third, and thus the race was started. 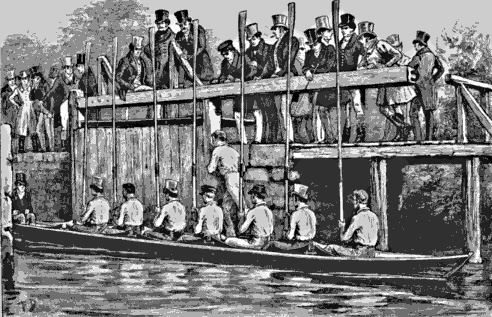 The current carries us gently to Iffley lock, distant about two miles - rich flat meadows on either side; but the landscape receiving grace and beauty from the hills of Shotover, Bagley Wood, and the slope on which stands the fine and very venerable church. The voyager, however, will often look back, for gradually, as we remove from the city, the view gains in interest; the lower houses disappear, while towers, and domes, and spires of churches and colleges rise above the trees, standing out in high relief, backed by the sky. 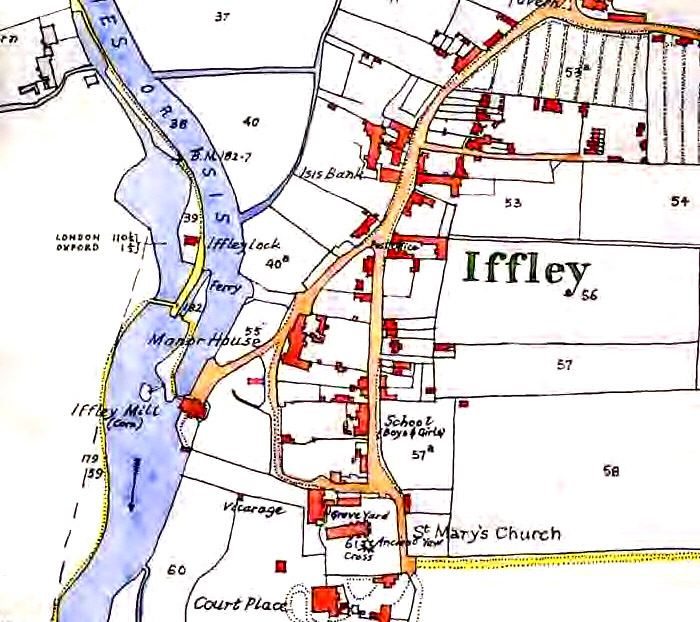 1875: Ordnance Survey Map
1877: Flood enquiry - the Revd J C Clutterbuck blamed Iffley as the real cause of flooding in Oxford.

There is a lock with two mills, with their accompanying weirs; - and if they were swept away that would be a great step towards improvement.

1881: Jerome K Jerome is a little miserable about Iffley Lock -

Iffley Lock and Mill, a mile before you reach Oxford, is a favourite subject with the river-loving brethren of the brush. The real article, however, is rather disappointing, after the pictures. Few things, I have noticed, come quite up to the pictures of them, in this world.

1885: Boatslide promised. The lock was nearly removed but finally saved by local petitions. The level of the river up to Folly Bridge (Lock) was to be lowered 2ft 6in., but the bed was to be dredged so that there should be a uniform depth of about five feet.
[See the "Head of the River" section for two strange consequences of this dredging. ] 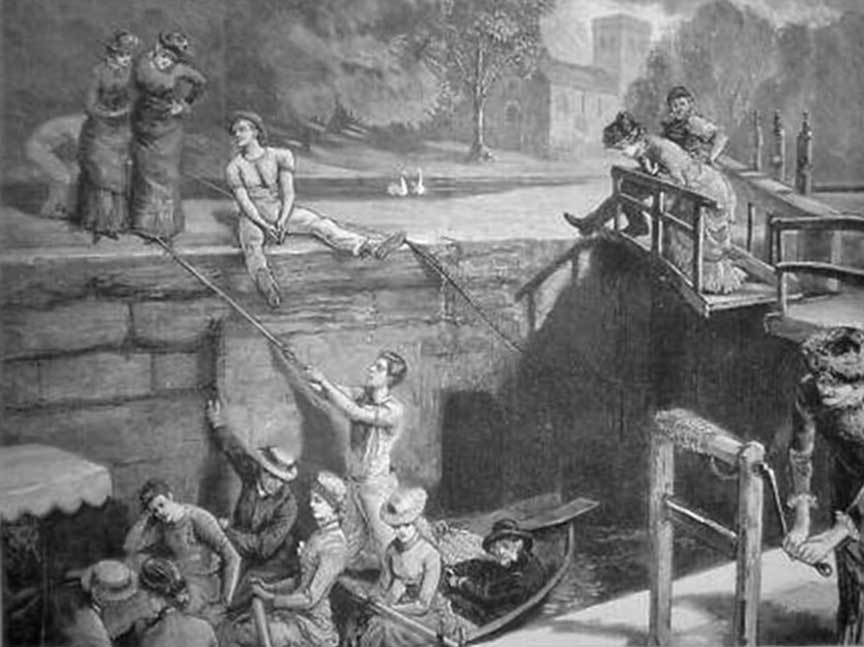 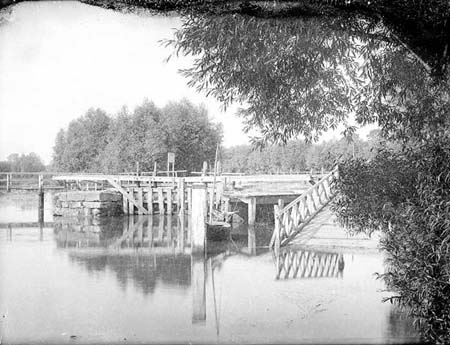 To the right of the lock is a slipway. I don't think this was the boatslide. In the previous Iffley Mill section there is a photo clearly showing boatrollers over the other side.

While the water ran out, the lock-keeper came and gave us that curious literary production, a Thames Lock Ticket. It admits you "through, by, or over the lock or weir" for threepence. That is, I suppose, you can go through the lock in Christian fashion, drown under the weir, push and pull over the roller if there is one, or drag your boat round by the shore; but whether you come out dead or alive, for any of these privileges the Thames Conservancy will have its threepence.

The channel running past the bathing places is equally unsuited for navigation, and is moreover guarded by two mills, but it may be negotiated with good luck. Hinksey Stream flows into this backwater, and there are several places, after shoals have been avoided or surmounted, where it is extremely pleasant to while away an idle hour.

In 1911 Iffley lockkeeper Percy Mellon was awarded the Albert Medal for bravery by King George V in the presence of Winston Churchill.
On a dark February night Mellon was informed that a woman had fallen from her bicycle into the river.
With water running cold and fast and being driven by a strong wind he leapt into the water when he spotted an apparently lifeless body being swept towards an open weir.
Displaying the gallantry for which he was honoured and with the help of his son and wife he brought the woman to the bank.
The medal and the original citation with accompanying press cuttings have recently been loaned to the River & Rowing Museum in Henley on Thames by his granddaughter.

1924: Iffley Lock rebuilt in a different place to the left west bank side of the old lock, which can still be seen, and is used as a weir. If you look at the old map above you will see that there was considerable reshaping of the lock area.
On the left west bank, side of the modern lock, in place of what was a weir stream from the lasher above the lock until 1924, are the boat rollers (boat slide) - they are not now locked - but not easy for a punt to use. The Iffley - Sandford reach is difficult punting - so maybe there was an intention to discourage hired punts from going down there.

There are two bridges over the slide to the lock side:
1923: The 'Mathematical' Bridge, built by the Thames Conservancy when the lock area was reconstructed Designed by G. J. Griffiths - 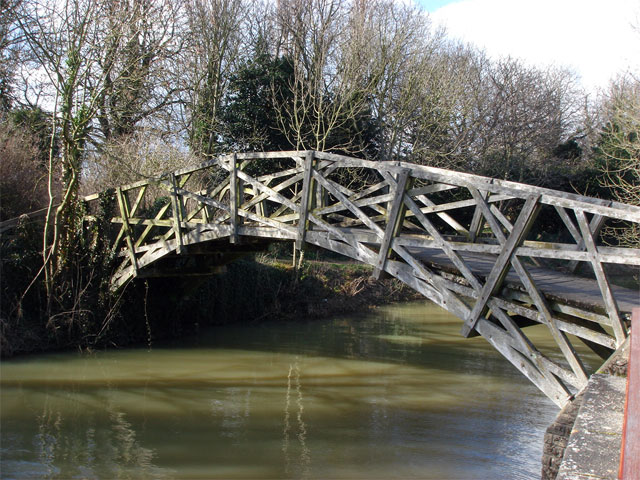 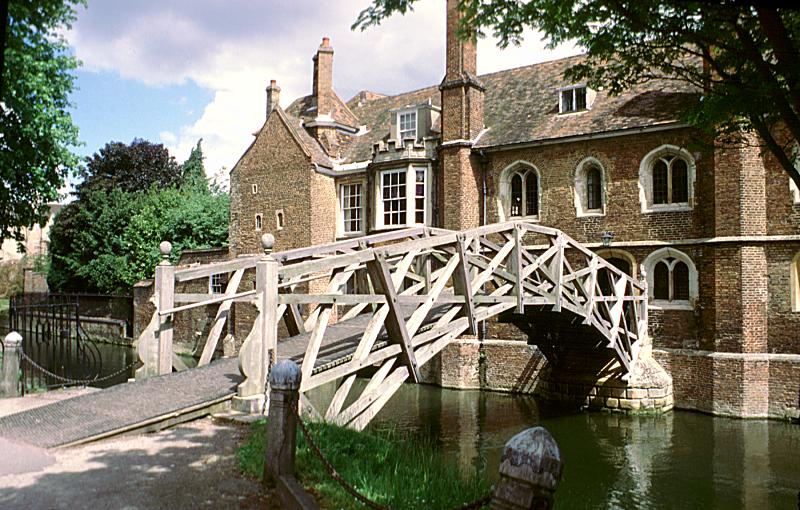 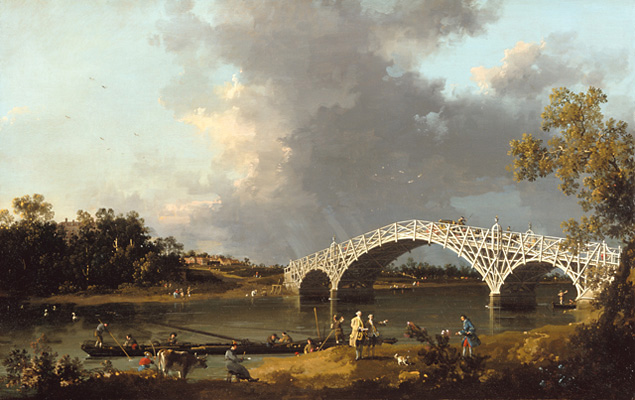 1750: Walton Bridge designed by Etheridge and painted by Canaletto

The upstream Bridge over the boatslide is a stone bridge, presumably from around 1924 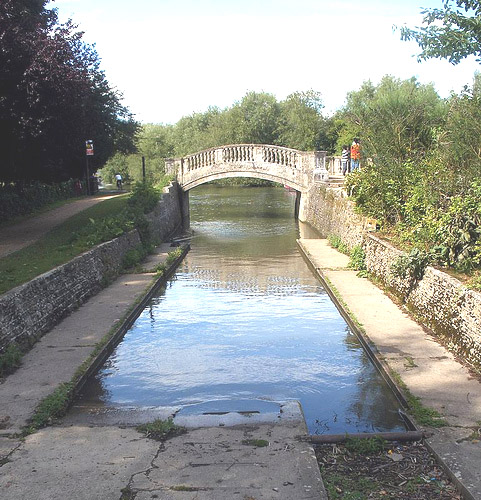 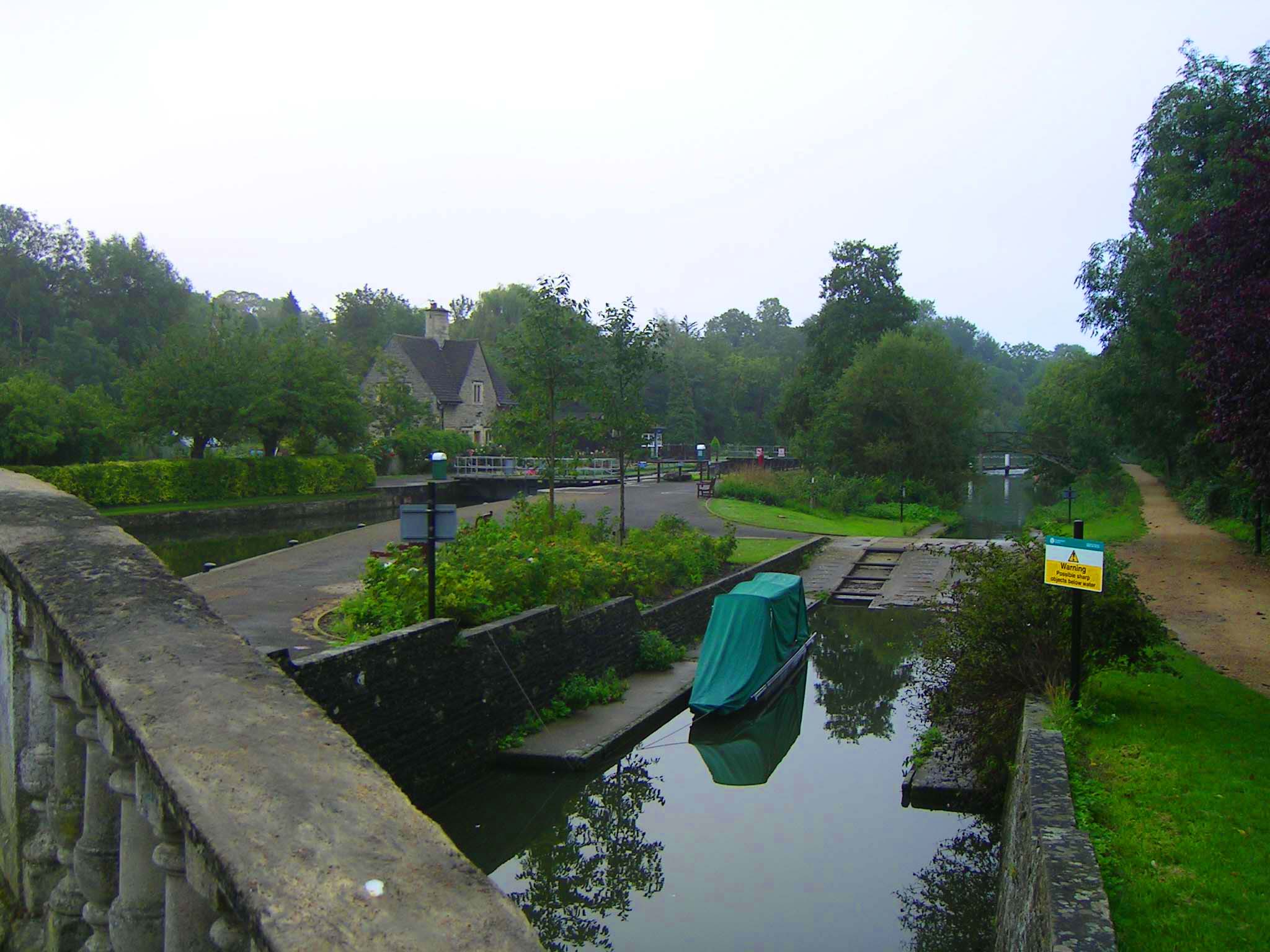 Iffley Boat Rollers & my punt one gloomy morning, with the lock and lockhouse beyond.