[ As to the name "Black Bridge" I notice that the old name for the big wood to the east of Nuneham Park used to be "Black Wood". The railway goes nowhere near it, but maybe the wood for the first bridge came from there? I recently met a Radley rowing man who knew the bridge under this name. ]
The bridge has, it seems, a very similar history to Appleford Railway Bridge (which is only a mile or so down the line, though much further by water). As with Appleford Bridge I can so far find no picture of the 1844 original.
1843: Isambard Kingdom Brunel drew up this design sketch for Nuneham Bridge which is far more convincing than I had previously imagined. (I had thought it would have been like the original Bourne End Bridge). In the sketch book catalogue the bridge is said to be in timber. It may of course not be the right bridge. 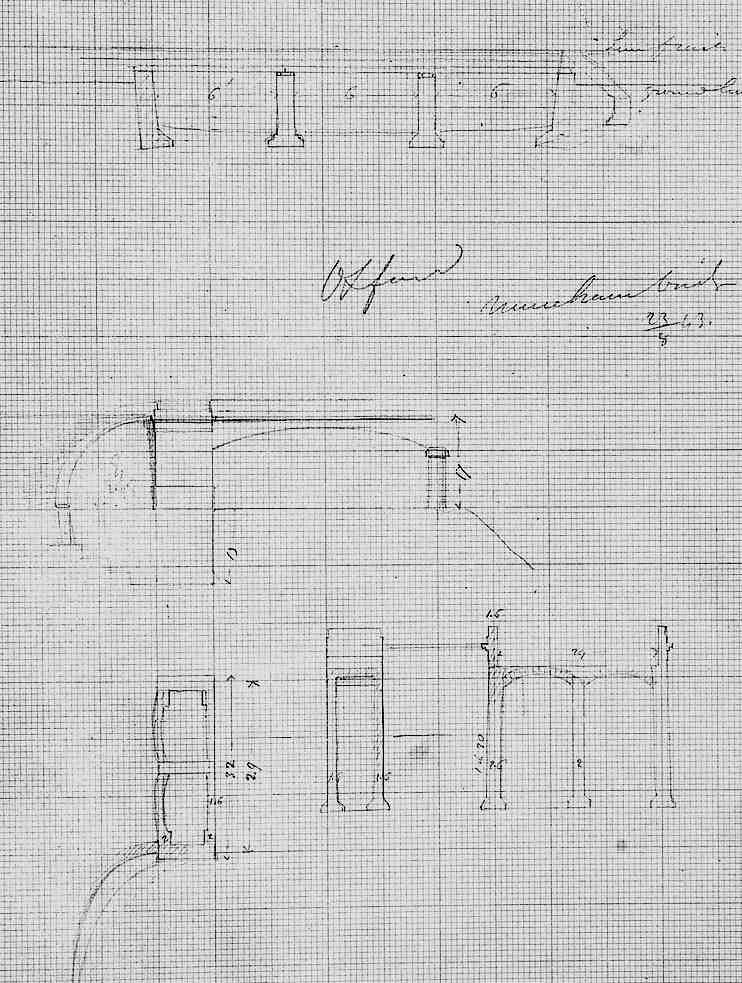 An elevation in August 1852 shews it to have been first proposed in timber. All the openings were to be 40 ft. wide

This scenery continues until we reach the modern railway bridge, [ the three year old iron bridge of 1856 ]when, on the right bank of the stream, Radley House is descried: another turn of the river, past this demesne, and the spire of Abingdon comes in view. Between Nuneham Courtenay and Abingdon the river winds so much. that when we reach this ancient town we are nearly opposite to Oxford, distant about six miles. 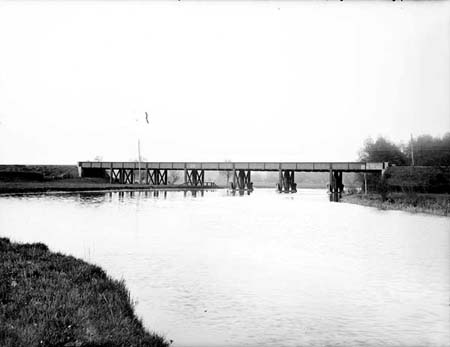 1873: Coxswainless Fours were established. They were arranged to be rowed from the lasher to the island at Nuneham, as level races, but the steering was so atrocious that this latter idea was soon abandoned.
We can well remember the sorry plight of one of the crews as we saw them one day, dripping wet, and shivering in the cold wind on one of the piers in the middle of the river under Nuneham Railway Bridge; too cold to swim, and with no friendly boat in sight to take them off, and their own boat a wreck through running into the bridge;
and the steering in the other boats was nearly as bad, only they had the good fortune always to run into the bank on one side or the other.

It is best to see Nuneham Reach from the railway bridge. From any other point it is necessary to see the bridge itself. 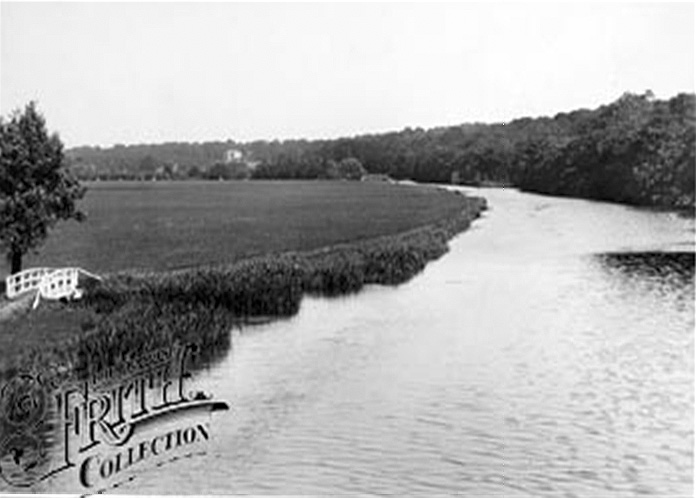 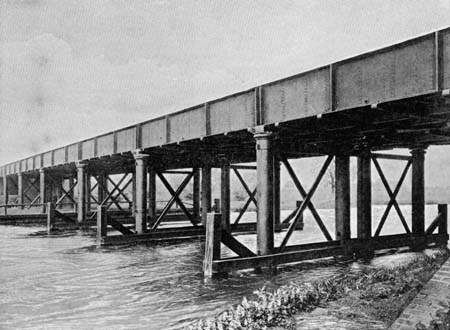 1906: Faringdon Advertiser and Vale of the White Hose Gazette: ACCIDENT AT BLACK BRIDGE:

An alarming and fatal accident occurred on Monday afternoon at Nuneham Railway Bridge, which crosses the Thames between Radley and Culham Stations.
For nearly twelve months workmen have been engaged in re-building the bridge, for which it was necessary to erect staging overhanging the river, and about 4.45 on Monday some of the staging gave way, and, with two men who were standing on the platform, fell into the river, a third being only saved by clinging to one of the girders.
...
The bridge originally built for the opening of the branch line from Didcot to Oxford in 1844 was a wooden structure.
This was replaced by an iron girder one in 1856 being the bridge which was receiving attention in the above report.
This in turn was replaced by a steel twin bow arch bridge in 1929 which is still in use.

The Cambridge crew was a cosmopolitan one by the standards of those times with a Dane at bow and a Turk at 4. Oxford on the other hand was nationally more traditional, but had no less than 4 medical students in the crew. As on the previous occasion (1940) training was restricted to three afternoons per week for both crews.
The banks of the rather narrow 1¼ mile course (from Black Bridge to the island by Radley Boathouse) were thronged with spectators all of whom had had to reach it by either bicycle or on foot. The newspaper reports at the time speak about a crowd of between 7,000 and 10,000.
Oxford won the toss and chose the Oxfordshire bank. They set off at 40 compared to the Cambridge 37 and were in the lead almost immediately, reported as a length up in less than half a minute. Despite being left at the start, Cambridge clearly did not give up and gave a spirited response for the judges verdict at the finish was a win for Oxford by two-thirds of a length. 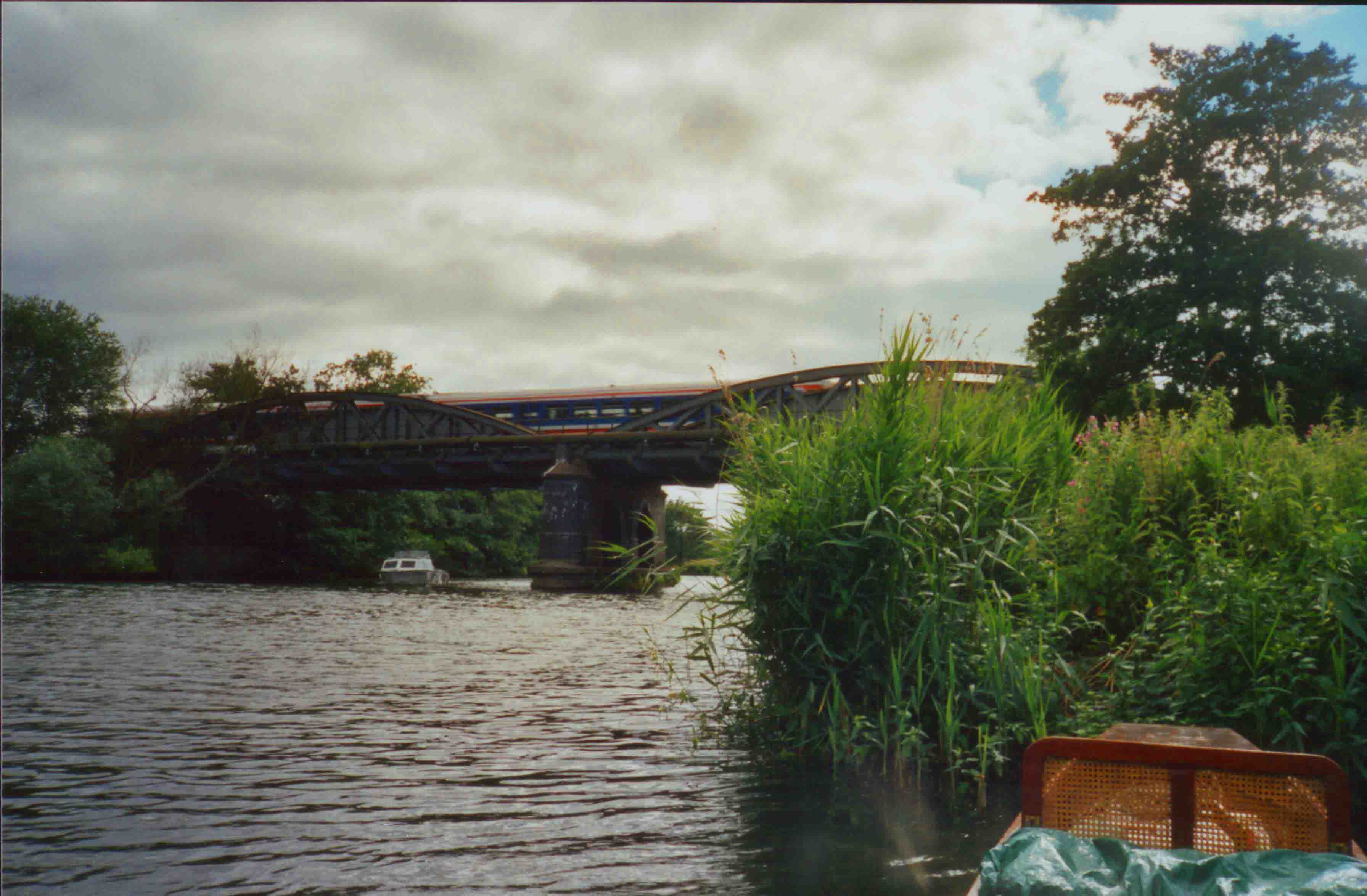 [ Aren't I nicely tucked up in the reeds!  I was blown there! (And then decided I should take a photo to justify myself.) I was going to Abingdon on a windy day and somebody had taken Abingdon and made off with it.  Whole sections of river had been randomly inserted.  That two miles from Lock Wood Island to Abingdon stretched quite endlessly ]

All the afternoon we drifted with the stream, or lay for hours among the reeds by the banks, watching the boats. In the stillness we could hear the splashing of oars, the grinding of rowlocks long before they came in sight, far voices, and even the sharpening of a scythe on shore.
And then a shrill whistle and a train rushing across the meadow-land would remind us that this great quiet of the Thames is within easy reach of London. 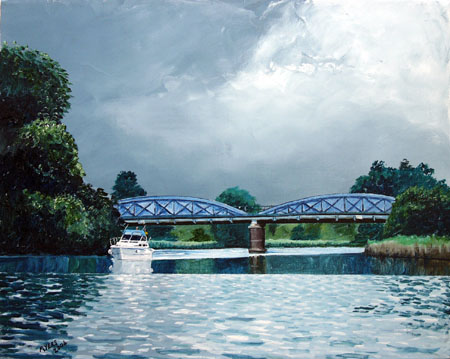