1910: Clifton Hampden Bridge in Thames Valley Villages by Charles G Harper
Downstream from the bridge was an island (Knapps Ayt)
The original settlement would have been there because the river was fordable in summer.
1607: Clifton Ferry. The ferryman used to sit in the inglenook fireplace in the Barley Mow, watching for customers through the window.

... about midsummer a sturgeon eight feet long was take up at Clifton Ferry in County Oxon by some of the family of Dunch of Witman [Wittenham]. Dr John Lamphire eat some of it and Hen[ry] Price of the Blew Boare [?Abingdon] dressed it.

1692:  Baskervile  At Clifton fferry is a great boat to carry horse & man oover

FROM Long Wittenham the river winds suddenly towards Clifton, a village in Oxfordshire, where the combination of objects is truly picturesque. A small church, situated on a richly variegated bank, rising almost perpendicularly on the border of the river, (on which the traffic of the ferry-boats gives a perpetually moving picture) cannot but attract the eye of observation. The water here is remarkably shallow, yet perfectly transparent, and beautifully reflects the clear and gravelly bed of the river.

1834:  Pedestrians Tour - the ferry boat continually passing to and fro
1863:  Bridge Planning, Sheila Llewellyn The View from the Bridge -

Henry Hucks Gibbs had been entertaining the eminent Victorian architect, George Gilbert Scott, and had complained to him that those of his domestic and estate staff who lived in Long Wittenham were often late for work having missed the ferry.
Scott is said to have shot his linen shirt cuff and drawn on it with a pencil, out-lining a design for a seven-arched bridge, altered later to six arches, the building of which would leave the staff with no excuse for lateness.

I Henry Gibbs Hucks built the bridge, Homfray being the engineer, and Gilbert Scott the architect.
The cost was £3,617-15s-10d of which no less than £686-12s-6d was for Parliamentary expenses, including £200 for fees.

[ Probably none of the three named above actually got their hands dirty. The man who did the work was Richard Casey who also built the Toll House and became its first keeper. ]
Here he is in later life, with his wife - 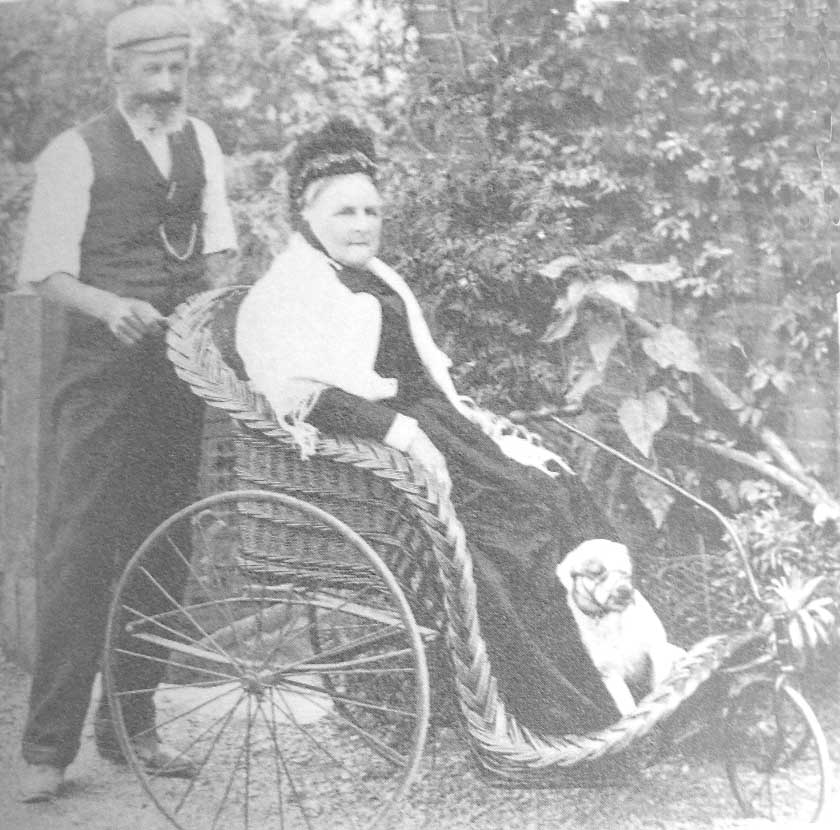 Richard Casey, Builder and Toll keeper of Clifton Hampden Bridge, with his wife

And this was Richard Casey's house - the toll house - 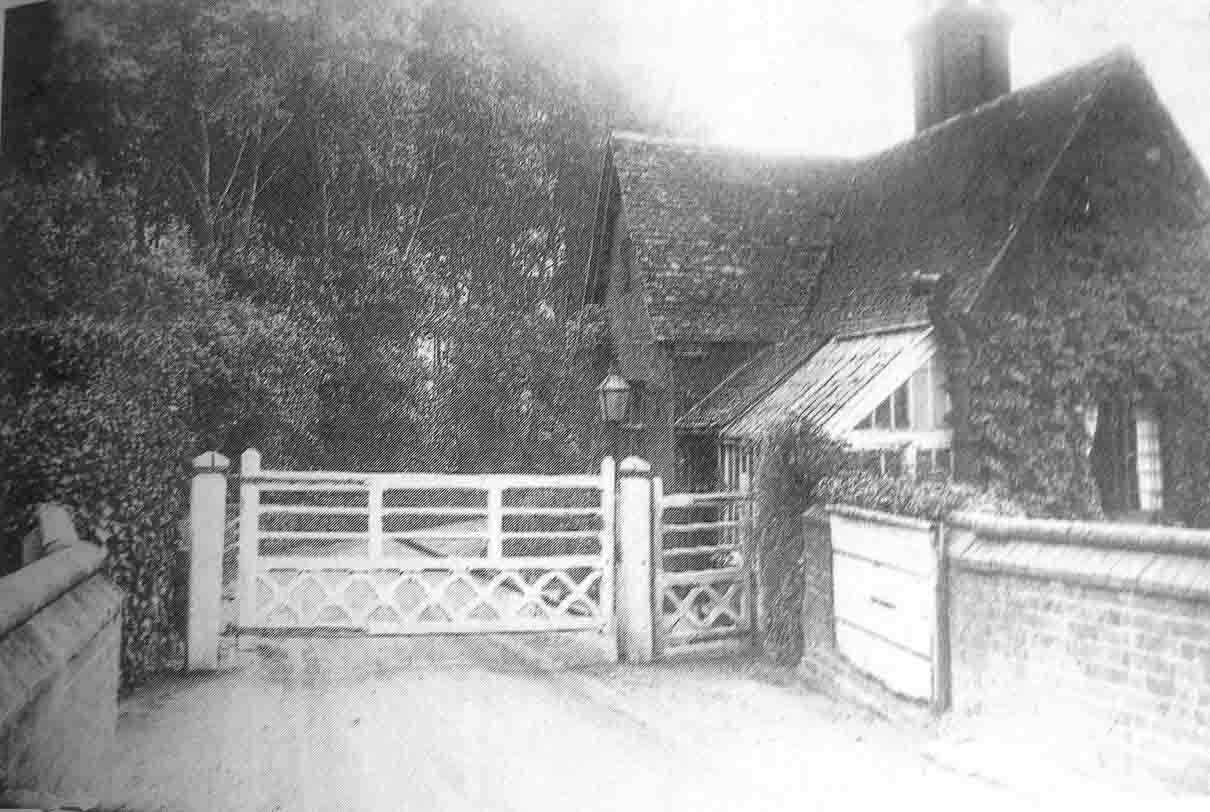 And these were the tolls he was charged to impose:

[ And for breathing within sight of the bridge?
Actually to be fair to Clifton Hampden this was a nationally used scale of charges. ] 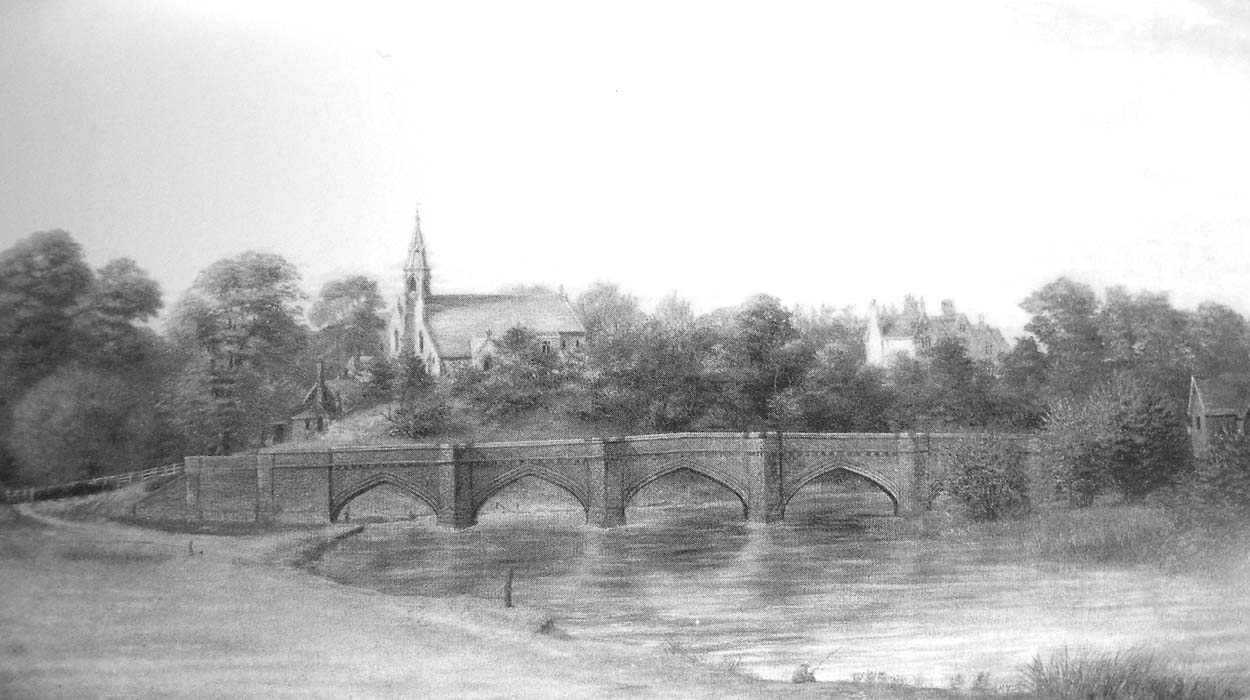 Clifton Bridge is a neat new brick structure, spanning the river in place of the old ferry; and close below, on the top of a sharp bluff, is the very pretty church. 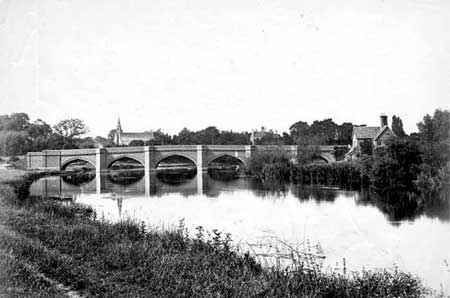 The bridge is of red brick, with ribbed Tudor arches, which will become very beautiful when age has toned them a little.

[Clifton Hampden] derives some importance from the new red brick bridge with six pointed arches, built by the lord of the manor in place of the ferry which formerly existed here, the towing-path crossing the river at this point. The toll for horses not drawing vehicles is 1½d., and for foot passengers 1d.

We never went to the landing-place that we did not see launches and skiffs and punts (and once the Minnehaha and the Hiawatha, two real canoes) either passing by or pulling to the shore where the pretty girl was ready with her boat-hook. 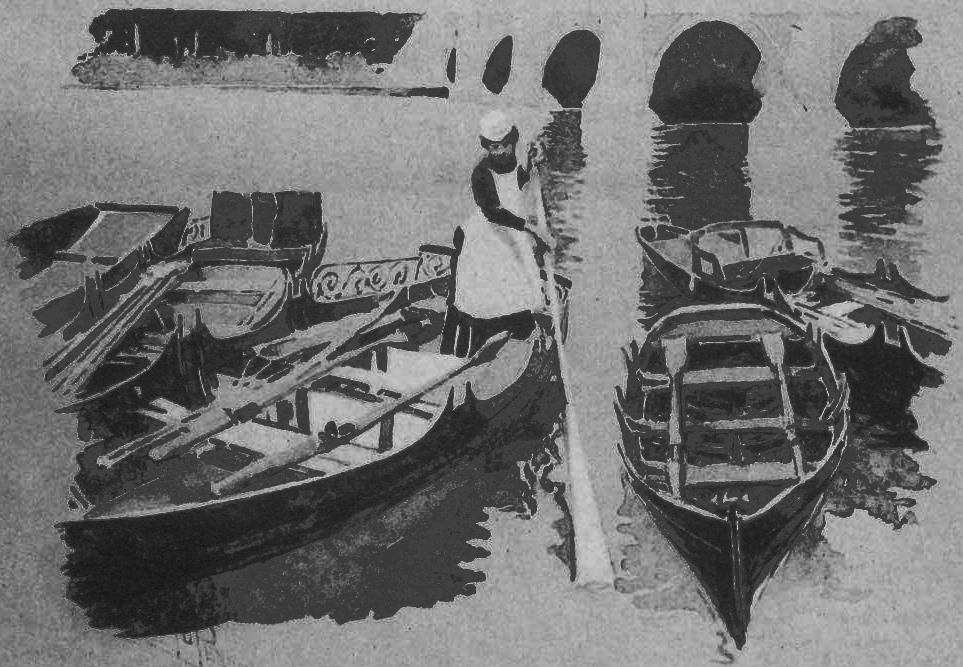 How the world has changed! Imagine pulling up to the landing stage and just climbing out of your boat and leaving it to a maid to park it until next wanted! I tried hard by manipulating contrast in the drawing to eliminate her full beard!

It was strange how even the record-breakers, at other landing places in such a hurry to be off, found time to stop and help her, or to watch her as she skilfully punted her way in and out of the great mass of boats, put some under the bridge for the night, brought out others for the crews about to start.
Here all was life and movement, while Clifton Hampden itself, where the thatched cottages are scattered along the elm-shaded road, and climb to the church high above the river, seemed to sleep peacefully day and night.
Only the schoolhouse, with its large clock-face and loud bell, gave signs of life.
If you went into the Post Office, where sour balls and ink-bottles were the chief stock-in-trade, you started a little bell jingling as you opened the door; but it was five minutes or more before the postmaster came in from the near fields, bringing the smell of hay with him.
Fishermen slumbered on the river banks, 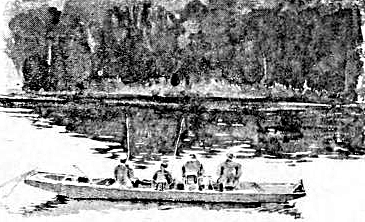 and there was always one punt, stationed almost under the shadow of the little church, in which on three chairs sat three solemn men who never stirred, except when one, still holding fast to his line with his left hand, with his right lifted up a great brown jug, drank long and deep, and handed it to the next, and so it passed to the third.
The sun shone, the rain fell, the shadows grew longer and longer and the jug lighter and lighter, but whenever I passed, there they still sat.

Once Ruskin, as he stood here by the river with the light of sunset falling upon it, and watched the flaming and fading of the pools among the rushes, and the water hurrying from under the brick arches, saw a little boy run from one side of the bridge to the other, and lean far over the parapet with eyes fixed on the current beneath.
Of what was he thinking, this little boy?
Was it of the hurry of the water, of the beauty of the evening, or had this speed and loveliness already awakened him to higher and holier thoughts?
And as Ruskin wondered, a boat drifted from under the arches into the light, and the little boy, leaning still lower,
spat upon the oarsmen, and dodged quickly and ran away,
and Ruskin went home a sadder, if a wiser, man.

I've met that boy - he threw an apple at me, and quite accurate he was too!

The bridge is of red brick, and, with a little toning by weather, will make a capital accessory.

1920: Thacker: "Built", says Dredge, "professedly to match Abingdon and Culham Bridge".
(He adds: "It appears to me to have been diablement changé en route".)
1929: A Thames Survey -

Clifton Hampden Bridge built entirely of brick about 1863 and repaired in 1887. It consists of five brick arches of varying spans plus an additional arch for flood-water on the Berkshire bank. The bridge is well designed and the bricks are of a pleasant colour and texture. There are no side-walks but triangular recesses over the piers for the safety of pedestrians. Tolls payable at toll-house on the Berkshire side. 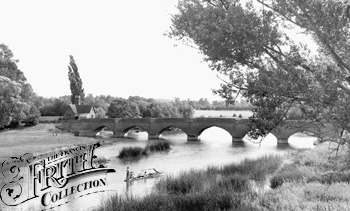 As an experiment, before we had all become so conservation and environment-conscious, the children of the junior class of Clifton Hampden Village School placed a message in a glass coffee jar and threw it over the bridge parapet into the river.
It negotiated 28 locks and weirs, floated out of the Thames Estuary, and crossed the channel. Ten months later it was washed up unbroken on the beach at St. Malo in Brittany and found by Isabelle, Sylvie and Vero Drevivier who were enjoying their Christmas holiday. When they returned home to Tours they answered the message from the Clifton children, who received the reply three hundred and sixty days from the date of 'posting'.

'Highly remarkable and slightly reprehensible' was the comment of a Thames Water Authority elderly spokes-aunty.

1999: Sheila Llewellyn in The View from the Bridge 

There is a remarkable narrow bridge over the River Thames at Clifton Hampden in Oxfordshire, with six elegant arches. It is said to resemble the medieval bridge at Albi south of Nantes in France, though it was built of local bricks.
When you stand in one of the small triangular embrasures above the cutwaters, which thrust upstream into the current, and look around you, it is a peaceful scene, idyllic on a sunny day. Swans, all ringed as cygnets and kept track of, glide in a little bay near the bank, and in their season there are bulrushes and rafts of yellow water lilies. Beneath your feet the water flows smoothly ...

This is the medieval bridge at Albi - look at its scale, height, design, type of river, setting ... 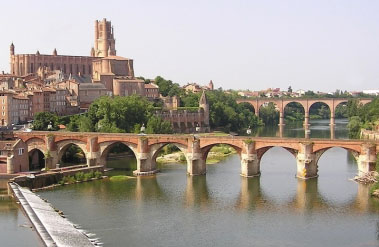 Is Albi Bridge like Clifton Hampden Bridge?
Well there is a church downstream on the RIGHT bank and if you imagine the Albi bridge in high flood with the water up to the red brickwork then yes there might be similarities. 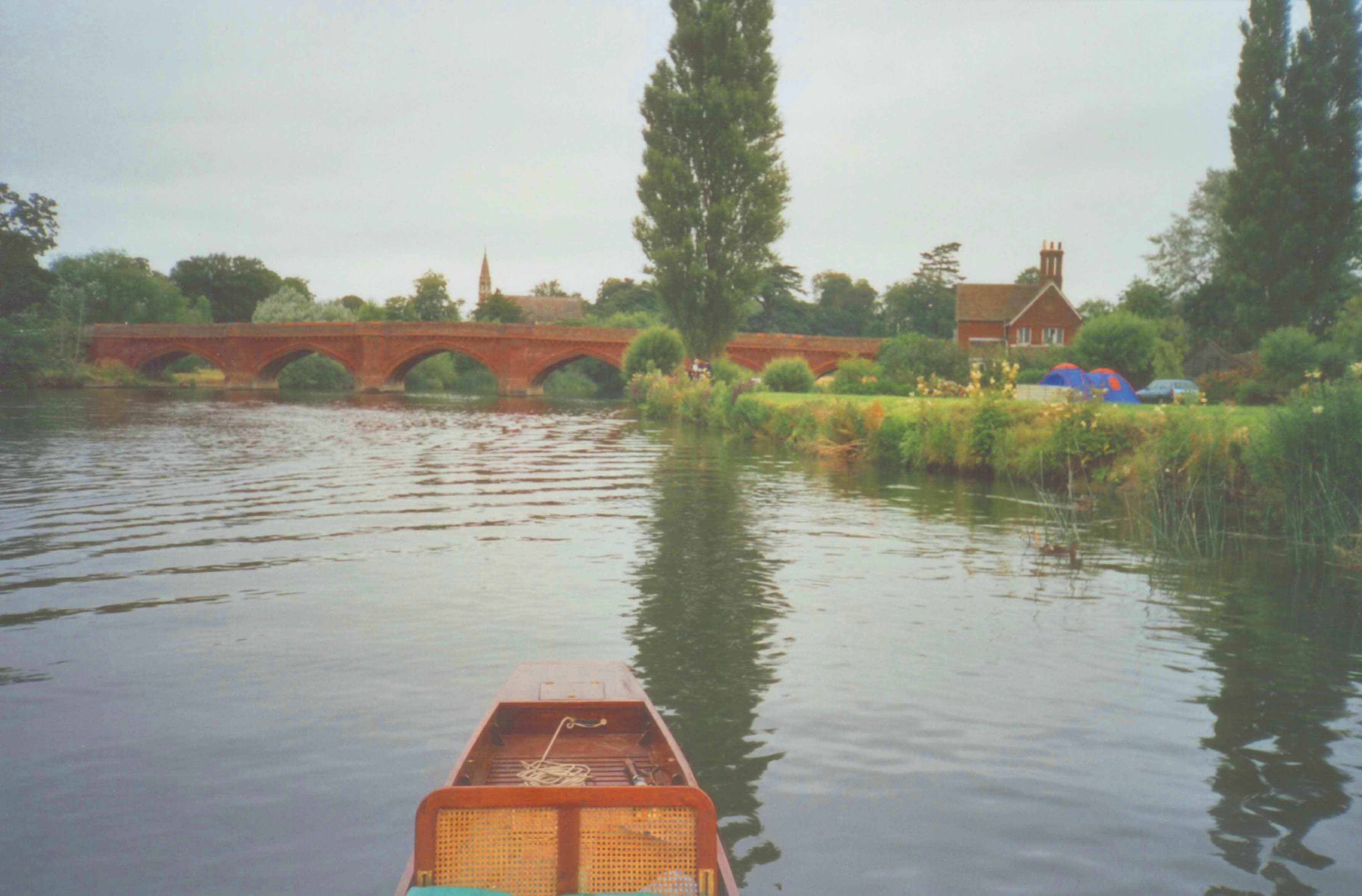 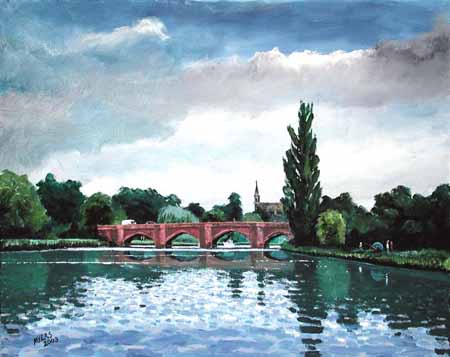