Notice the PC marking on the map: PW = Place of Worship

1792: Samuel Ireland shows this drawing of the old Church, before its restoration, and before the bridge - 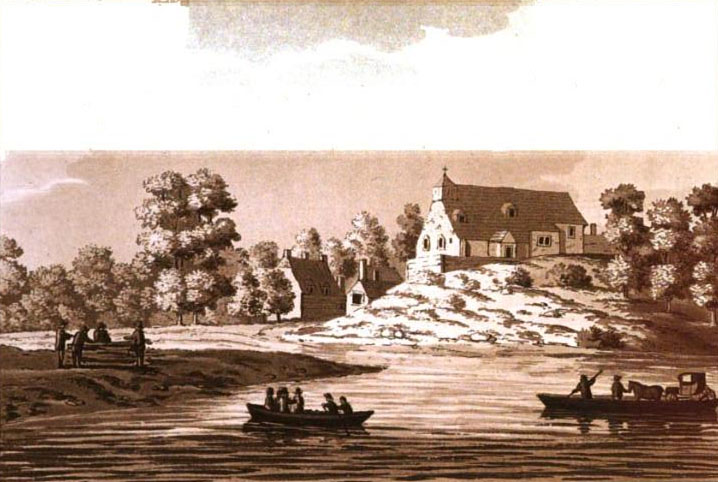 1844:  Letter from Gilbert Scott about his restoration of Clifton Hampden Church -

I have lately been doctoring up, rather than restoring, a little church at Clifton Hampden near Abingdon . . . which you will, I fear, not altogether like, as it is not a strict restoration, indeed we had hardly anything left to restore-it is rather a refoundation (keeping it in the main to the old plan)

1848: Alfred Rimmer (in 'Pleasant Spots around Oxford') was however not in sympathy with Gilbert Scott

The Church of Clifton Hampden has suffered from the "restorer" as have too many in the country, and one sometimes is almost in despair of "restoration" being called by its proper name - destruction.
Fortunately in this particular church the dim light which its original builders designed for it hides much of the decoration of the interior; but some architect - a "restorer" it was said - has laid his heavy hand upon it.
"Surely you would not let the old churches go to decay?" I fancy someone may add.
Most certainly not; keep them in thorough repair, but understand what that really means.
... all that is wanting is scientific knowledge on the part of architects
... If your church is coming down, repair it, "restore" it if you will, and get someone who is practically acquainted with his work; but do not call any alteration that a fashionable architect who is paid his five per cent for every vagary he may be sucessful in enabling you to accept, a "restoration" ...

[He goes on at considerable length!] 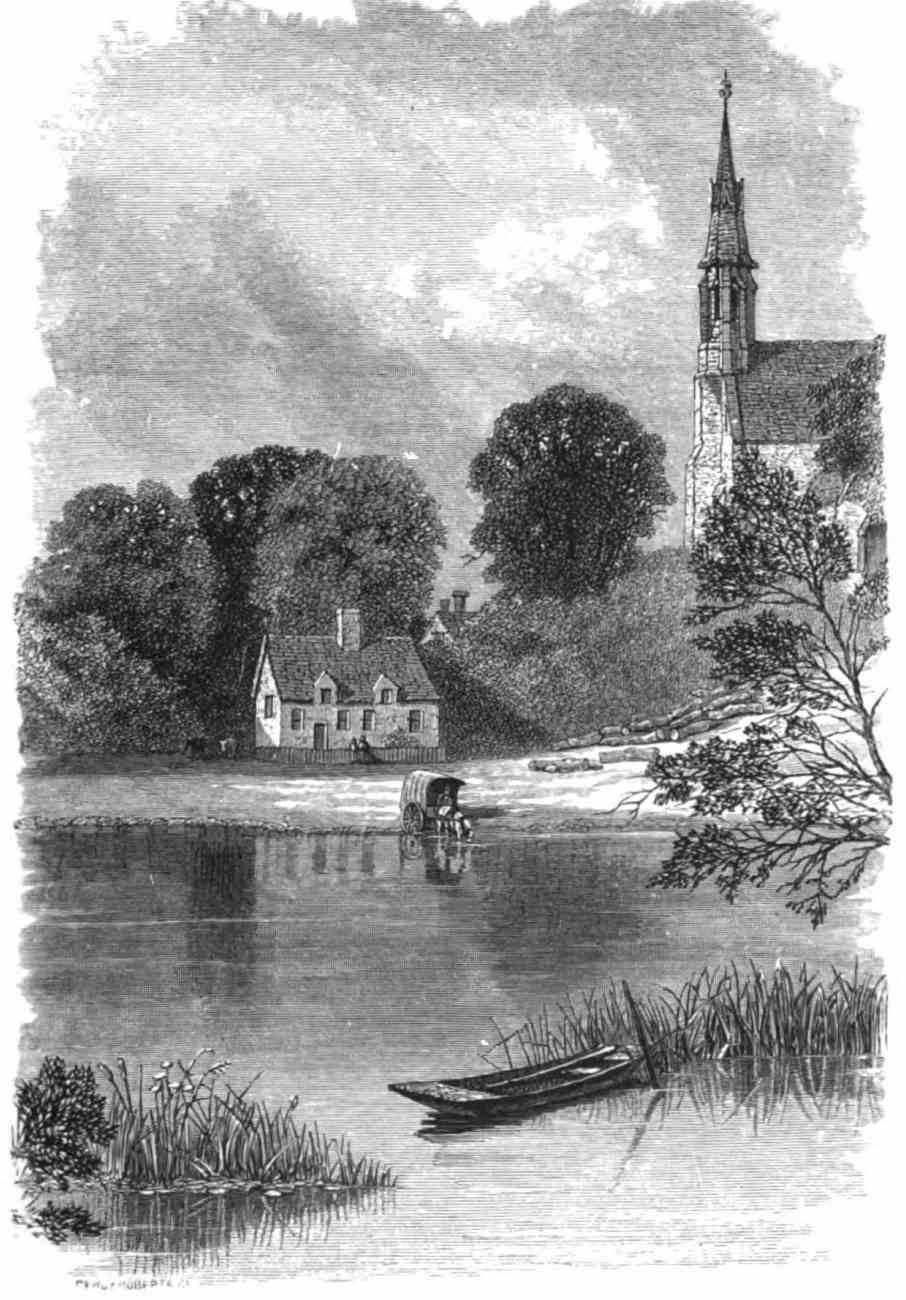 The Thames at Clifton Hampden 1848
from Pleasant spots around oxford, by Alfred Rimmer

From Abingdon the Thames pursues its course with little to attract the tourist until we arrive at the ferry of Clifton,
[ Clifton Hampden Bridge was not built until five years later ]
over which hangs a small hill, the summit of which is crowned by one of the most graceful and beautiful modern churches in England.
Before we visit it, however, let us pause awhile to enjoy the calm quiet of the scene; to examine the luxuriant water-plants, and listen to the music that issues from every "bush and bosky dell", and not unfrequently from the borders of the stream on which we glide. 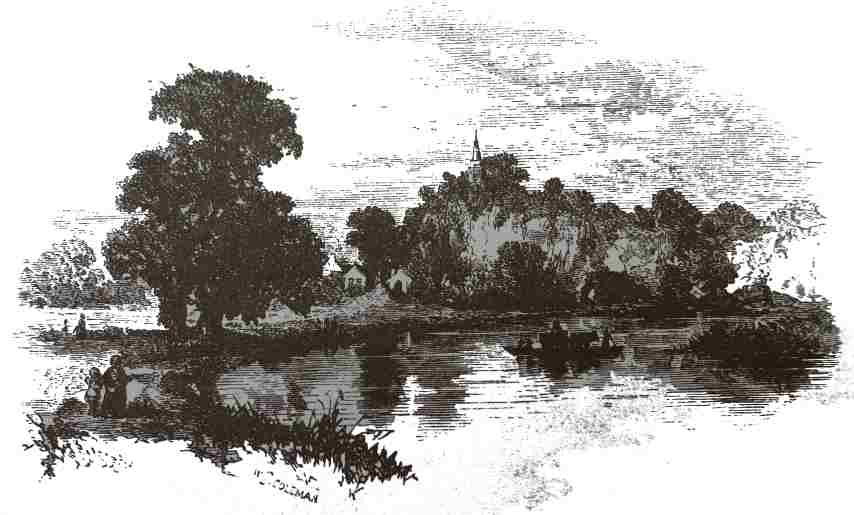 The scenery is purely pastoral, but is relieved by gently undulating hills. Upon one of the boldest stands the new church of Clifton — for it is a new church, although externally and internally the architect has followed the best models of the best periods of church architecture: it occupies the site of the ancient structure; indeed, the foundations, and some portions of the walls, have been preserved. It is a most attractive and graceful object seen from the river, and will bear the closest examination, for every part of it has been confided to the care of a competent artist; and all its appurtenances are as perfect as Art can make them.
The village, too, is neat, well-ordered, and evidently prosperous. Over the whole district there is evidence of wise and generous super-intendence; the clergyman is, we believe, the squire, and it is obvious that the temporal as well as the spiritual wants of the district have a generous and considerate minister. *
* "A small church, of mixed styles, beautifully situated on a cliff, at a bend of the river Thames. It has been restored under the direction of Mr. Scott, the architect, in extremely good taste, by the present patron, Mr. Henry Hucks Gibbs, in pursuance of the wishes of his father, the late Mr. George Henry Gibbs, with whom the design of restoring the church originated, and who left by will a considerable sum for this object." ("Guide to the Architectural Antiquities in the neighbourhood of Oxford." Parker.) 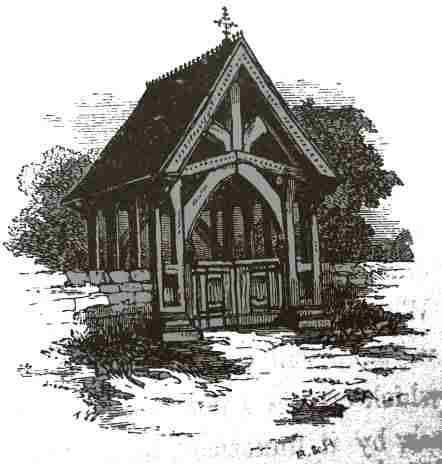 A handsome lich-gate of carved oak has been placed at the entrance of the churchyard, adding much to the picturesque beauty of the scene. From the tower of this church, raised as it is so much above the surrounding scenery, we obtain a noble view of now distant Oxford; and here, especially, we are impelled to recall the lines of the poet Warton: —

Ye fretted pinnacles, ye fanes sublime,
Ye towers that wear the mossy vest of time;
Ye massy piles of old munificence,
At once the pride of learning and defence;
Ye cloisters pale, that, lengthening to the sight,
To contemplation step by step invite:
Ye high-arch'd walks, where oft the whispers clear
Of harps unseen have swept the poet's ear;
Ye temples dim, where pious duty pays
Her holy hymns of ever-echoing praise;
Lo; your loved Isis, from the bord'ring vale.
With all a mother's fondness bids you hail!
Hail! Oxford, hail! 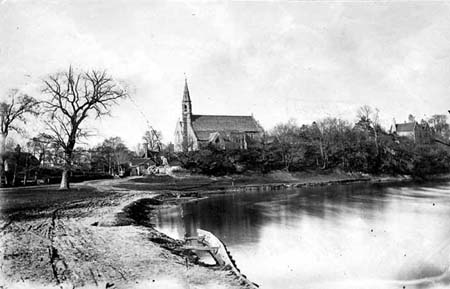 The little cliff on the Oxfordshire side, from which the village is named, is of this stone [i.e. the sandstone on the bed of the river], and quite unlike anything else on the river.  With its ivy bushes and small church perched on the top, it resembles some of Bewick’s vignettes very strikingly.

As we continue the journey down the Thames the shores on either hand seem cultivated like gardens, with trim hedgerows dividing them, pretty villages, cottages gay with flowers and evergreens, spires rising among the trees; and the bewitching scene reminds us of Ralph Waldo Emerson's tribute to the English landscape, that "it seems to be finished with the pencil instead of the plough."
The surface of the river is broken by numerous little "aits" or islands. We pass the little old house and the venerable church embosomed in the rural beauties of Clifton-Hampden. 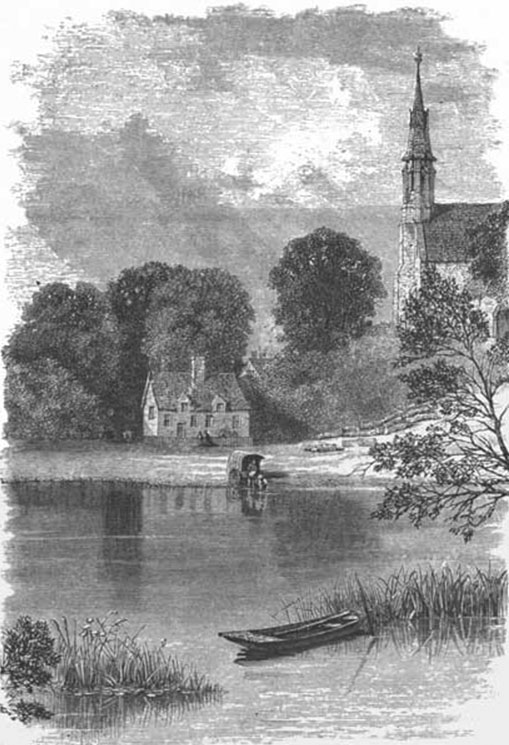 Clifton Hampden Church, Joel Cook, 1882
Note that this is a copy of Alfred Rimmer's picture of 1848!

Clifton Hampden, this picturesque little village, is situated at the foot of a bold bluff, which rises abruptly from the somewhat flat country around. The cliff is surmounted by the church and vicarage, and is clothed with luxuriant trees down to the water's edge. The village, a pretty collection of old-fashioned cottages, all of which are bright with flowers ... 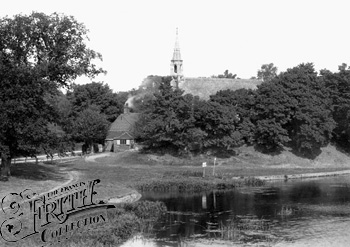 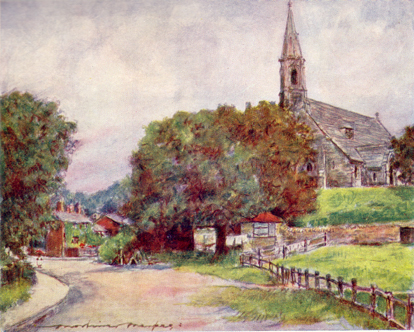 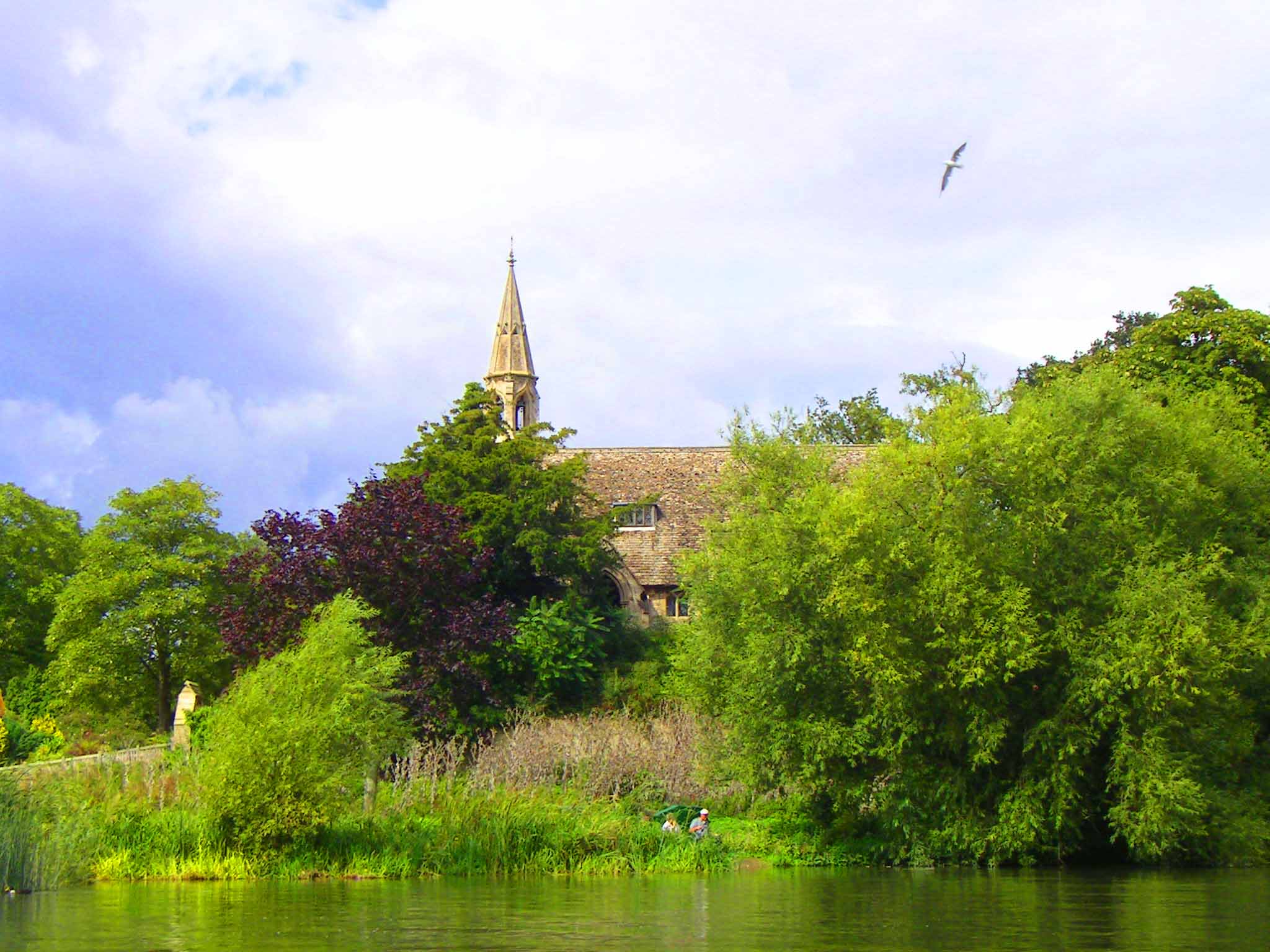 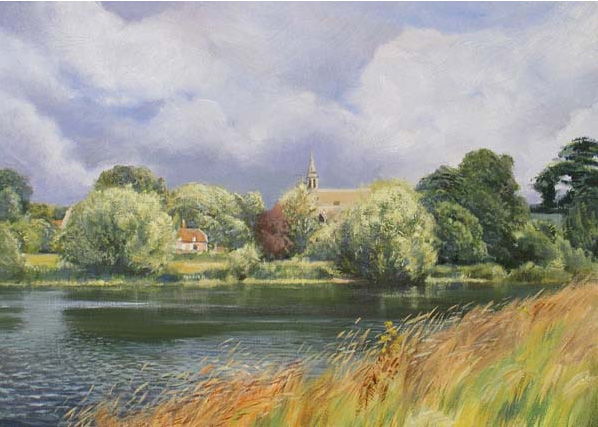