Burcot having, as far as I am aware, no current landing, is remarkable, as far as the river user is concerned, entirely for its past.
For hundreds of years it may have been the highest point which substantial cargoes could reach. Above it were the Clifton shallows, of solid rock and therefore not able to be dredged.
[Sheila Llewellyn, The View from the Bridge, 1999, says modern dredgers attempted it in the 1990s - and failed.]
On the LEFT bank to the south is very flat flood plain with few trees and Wittenham Clumps, the other side of Days Lock, in the distance. The river goes through 180° here. The distance from Days Lock via Little Wittenham to Long Wittenham is, as the crow flies, perhaps only a third of that as the punt glides.
The northern RIGHT bank is the much higher bank with the linear development of Burcot with its back gardens to the river. Here, it is said, was the wharf.<

1605: (and 1623:) The name of Burcot came to prominence in the setting up of the Oxford Burcot commission to deepen the river above Burcot. The commission built the first three pound locks on the Thames at Sandford, Iffley and Abingdon (Swift Ditch). This began the decline in Burcot's fortunes, navigationally speaking.

An Act making the river of Thames navigable for barges, boats and lighters, from the village of Bercot, in the county of Oxon, unto the university and city of Oxon.
WHEREAS the clearing and effecting of a passage for barges , boats and lighters, by the river of Thames to the university and city of Oxon, will be very convenient for conveyance of free-stone, commonly called Oxford stone, or Heddington Stone, from Bullington quarry, near the said city and river of Thames, by the said passage, to the city of London and other parts, and most profitable and necessary to and for the said university and city of Oxon, for conveyance thereby of coals, fuel and other necessaries, to the said university and city, whereof there is now very great scarcity and want, and far greater hereafter like to grow, if some help therefore be not made and provided :
(2) [ preserving the roads ... ]
(3) [ and preventing spoilage of goods ...]
(4) and whereas the said river may easily be made passable and navigable for barges, boats or lighters, between the aforesaid university and city of Oxford and the village of Bercot aforesaid, by removing some lets and impediments, by which means the said university and city of Oxford shall be greatly relieved and helped:
(5) be it therefore ordained and enacted [ ... four commisioners for the University and four for The City ...]
(6) which said commissioners or the more part of them shall have full power to cleanse, scowre, open and make navigable the said river of Thames, from the said city of Oxon to the village of Bercot aforesaid, and for that purpose to dig the banks of the said river or other ground, ditch, brook or stream near thereunto adjoining, and to cut away all trees and roots of trees that may be hurtful or hindrance to the said passage, and to open, prepare or make all wears and locks or turnpikes fit for the said passage, and to remove any thing that shall be any impediment or stop to the clearing and making of the said passage ; and likewise to cut, scowre or open any other stream or water-course that shall be most convenient for making the said passage or river navigable; and likewise to make and erect any wharfs, locks or turnpikes, or pens for water, in or near the said river or passage, that shall be fit or necessary for the same, and to bring, lay and work all materials requisite for the making, erecting and repairing of the said locks or turnpikes upon the banks or ground near the said river or passage.
II. [ Compensating anybody affected ...]
III. [Taxing the University and City as necessary]
(3) And for that the said passage from Bercot aforesaid to the said city of Oxford, is against the stream, the barges, boats, lighters or other vessels, must of necessity in some places and at some times be haled up by the strength of men, horses, winches, engines or other means in that behalf convenient ; be it therefore enacted by the authority of this present act, That it shall and may be lawful to and for watermen, boatmen, bargemen and other helpers of them, in convenient places, to have and use winches, ropes and other engines, and with the same by strength of men and horses or either of them, going up the land or banks near the said river or passage, through the said passage, without the hindrance, trouble or impeachment of any person or persons, to draw or hale up the barges, boats, lighters or other vessels, doing none other harm than only by going or treading upon the said land or banks near adjoining as aforesaid.

The site has been lost! But it must have been substantial. Heavy goods were unloaded here from barges that might have been 85 feet long and drawing maybe 4 feet. Good access by road would also have been required. And it cannot now be seen.
[I was unaware of the mystery last time I punted there - but next time I will have a good prod and see what I can find. A slow moving punt with a long pole can find things underwater that otherwise only a diver could find.] 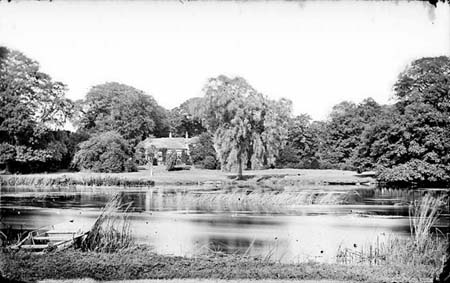 1937: John Masefield, poet laureate, lived at Burcote Brook, which burnt down a few years after his death and on the site is now the Cheshire Home named "John Masefield House", with gardens stretching down to the river.

I told you of our new house. We haven't quite got it yet, but I rather think we shall have it. It is a plain solid rectangular house on the river, in full view of Witnam Clumps which would be distant 2 or 3 miles I think.
You can fish or swim from the lawn, and it will be easy to have a boat or two and go a-rowing.
It is about 7 or 8 miles from Oxford, and from Abingdon and about 1 from Dorchester.
The pub [at Clifton Hampden] is the Barley Mow, where you used to get swindgeing good teas after rowing. I suppose we move there about May if we get it.

Dear Friend, come soon and look
At Burcote or Burcot Brook.
Put on your coat and surcoat
And take the ship for Burcote
And begg the good Herr Gott
To land you at Burcot.

[Not quite up to "Sea Fever" - "When I go down to the seas again ..." in my humble opinion. Did John Masefield write anything Thames related? I can't find it so far ... ]

His cousin wrote of him:
My last memory of my famous cousin John Masefield dates from the early 1960s, when I visited him at his home, Burcote Brook, on the Thames at Abingdon near Oxford. ... The advice John Masefield gave me over lunch that day, which as an author I have found invaluable, was never to imagine for a moment that a thought, a turn of phrase, a line of dialogue, would stay in mind until I was ready to record it, seated at my desk. 'Believe me young man it very seldom does. So always carry paper with you and a pencil', John memorably advised. 'Jot it, JOT IT DOWN whenever and wherever it occurs.' ...
Three years after that lunch with him in Abingdon, John Masefield died, and soon afterwards the family were out in force for the interment of his ashes at 'Poets' Corner' in the South Transept of Westminster Abbey.
...
'Which wasn't what he wanted anyway,' scrawled Judith Masefield later on the back of an old Christmas card. 'Because I found this sorting his MSS, I think it must be his last poem.'

Let no religious rite be done or read
In any place for me when I am dead,
But burn my body into ash, and scatter
The ash in secret into running water,
Or on the windy down, and let none see;
And then thank God that there's an end of me.

View from private field at Burcot - Sunset over Didcot 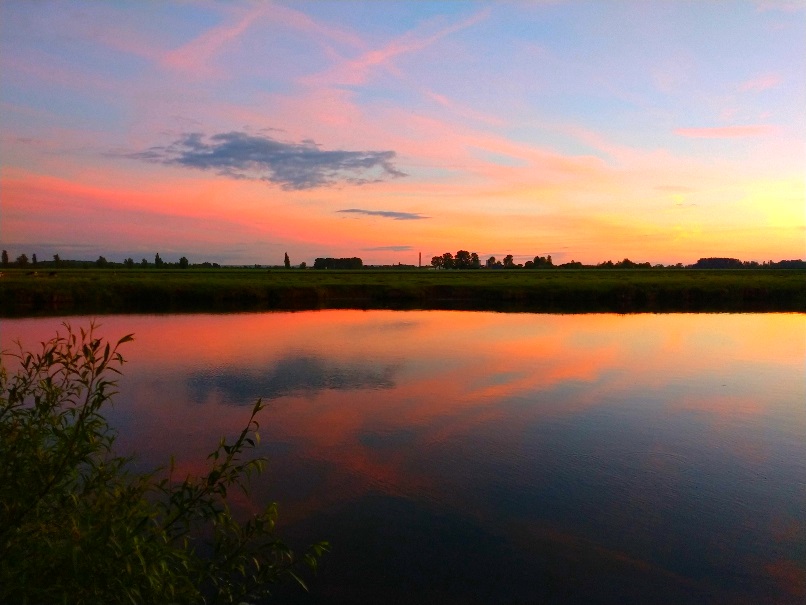 Sunset over Didcot from Burcot, May 2019
Six kilometers away the Didcot power station chimney still stands.
The three cooling towers are now demolished.

And now in 2019 the big tower has gone.
This is not the complete view, further to the left are the twin clumps of the Wittenham Hills, Sinodun Hills.
The Wittenham Clumps page will reveal their old names - "Mother Dunshe's Buttocks" and "Maiden's Breasts"
What a privilege to have a view of such features!
The horizons here are so wide, reminiscent of Norfolk - and unusual in the Thames valley.