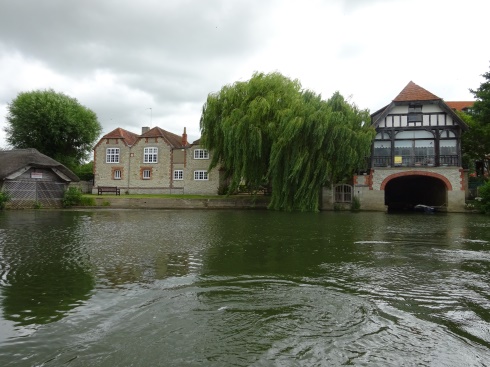 There have been discussions about a possible footbridge on the site of the old ferry - otherwise Thames footpath followers have to take to roads (or hitch a lift across from a passing punt!) 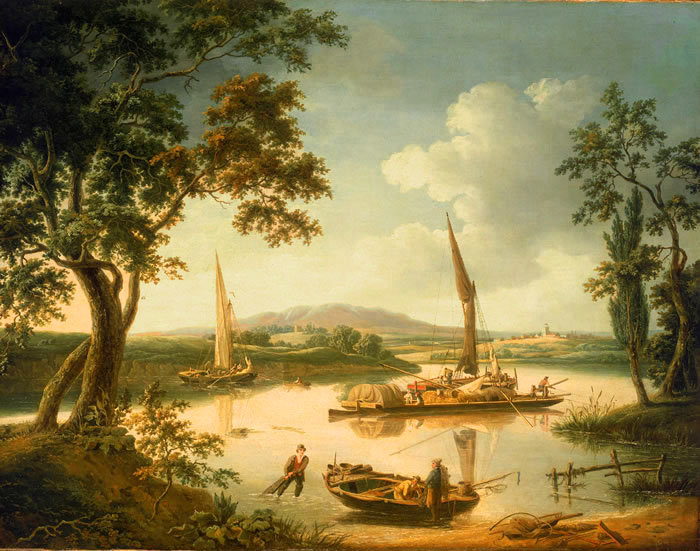 From the junction to Wallingford the "united streams" [Thames/Isis + Thame] —

With friendly and with equal pace they go,
And in their clear meanderings wandering slow -

soon pass under the bridge of Shillingford, from whence the tourist may walk some two or three miles to offer homage at that shrine in the grand old church of Ewelme, which contains the dust of Sir Thomas Chaucer, the poet's first-born son.
Shillingford is an antiquated village, with many large farm-houses of red brick and timber, warmly thatched, and with an air of picturesque comfort about them thoroughly characteristic of English rural life of "the better sort". Indeed, this portion of the Thames is as completely rural and unsophisticated as any part of England.

One end of the village of Shillingstone abuts on the river a short distance after the bridge is passed;  a brewery, a few cottages, and a coal wharf, form themselves, with the aid of a barge or two, into a picturesque group, at the place where the village street runs down to the water;  this street or lane connects Shillingford with Warborough.

Beyond Shillingford, the river itself becomes, for about half a mile, almost insignificant, and there is not anything, beyond its general wildness, to delight in until Day's Lock is neared;
I may note, by the way, that I have picked the flowering rush amongst the weeds along the banks here.
As the huge Sinodun Hill, with its clumps of trees, is approached, the Berkshire shore becomes more romantic;  a pretty belt of trees runs along by the water's edge, tall black poplars being most conspicuous.  Sinodun Hill has been, in the Roman times, strongly fortified.  The great wide trenches, with their entrances, are still plainly visible, and fill the mind with wonder and curiosity;  on the other side of the river, the ancient town or camp is marked out, many acres being enclosed by dykes.  When here, I am always trying to picture to myself what the place must have looked like when the Romans occupied the land.  The river, no doubt, was shallower, and the stream swifter, with natural weirs here and there, probably full of big salmon and trout.  Had the Romans galleys or boats?  and what were they like?  The country round was probably mere forest wastes, abounding with wolves and wild cats.  The Romans must have been here some time, judging from the extent of their works and the quantities of relics that have been dug up.  I saw a number of pieces of Roman pottery, glass bottles, and other things which the Vicar of Dorchester had collected.