The Beetle & Wedge Restaurant at Moulsford 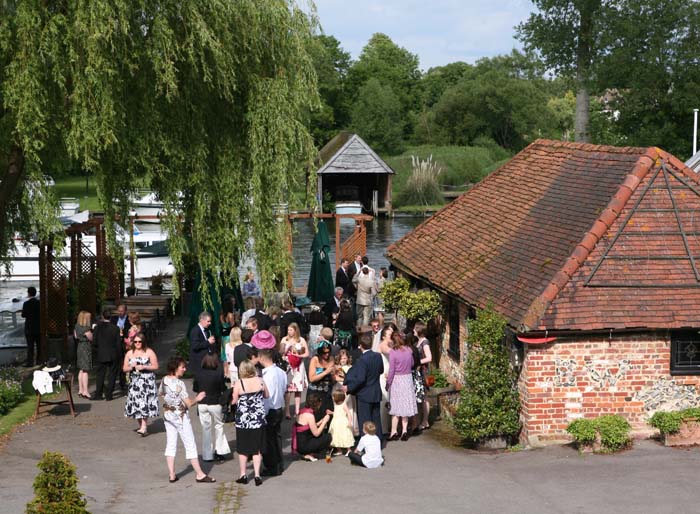 The Beetle and Wedge Boathouse Restaurant

Set on the banks of the River Thames immortalised in 'The Wind in the Willows' and Jerome K Jerome's chronicled escapades of his friends' visits in 'Three Men in a Boat', the Boathouse Restaurant emphasis is on quality of food, wines and service.
The older part of our beautiful old beamed Boathouse offers our famous open charcoal grill where delicacies are created before your very eyes. Join us and enjoy the tranquillity and peace of a beautiful riverside setting for relaxed dining.

Boating-men know Moulsford only as that place where the old waterside inn, the Beetle and Wedge, is situated. The queer sign has puzzled many town dwellers, but it presents no difficulties to country folk, for a "beetle" is well known to them as a heavy wooden mallet, used in splitting timber, and the "wedge" is the iron wedge inserted in the timber and struck by the "beetle".
The inn has, like most other Thames-side inns, been largely added to and altered ; but old frequenters of the river have ardent memories of it and their morning "rum-and-milk."
Does any one in these latter days take that old traditional Thames-side morning drink, "rum-and-milk", that once most favoured of all up-river restoratives? Have we not, in "those dear dead days beyond recall," as we lay in our more or less lavender-scented beds in some old-world waterside hostelry, been awakened by the clink of a trayful of glasses and heard a knock at the door, with the call, "Your rum-and-milk, sir"?
We had not ordered rum-and-milk at that untimeous hour, but as this was obviously the proper thing to be done, the custom of the country, so to say, we drank that strange drink, rather a heady and heavy drink, without question, and were promptly sent off to sleep again by it. 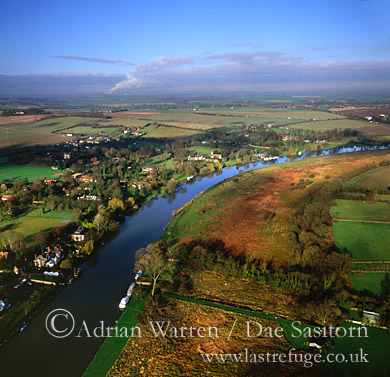 Aerial View of the Beetle & Wedge 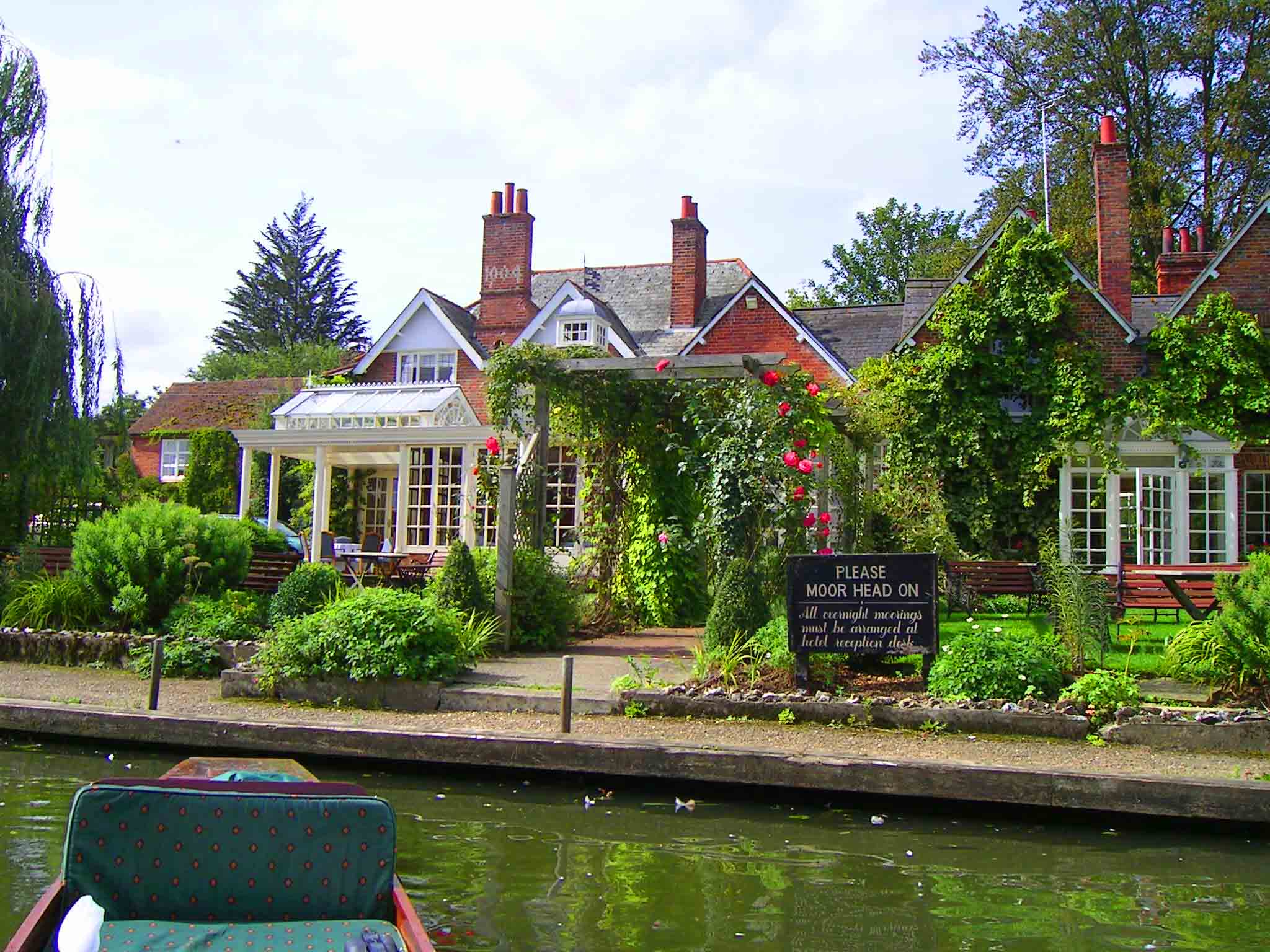 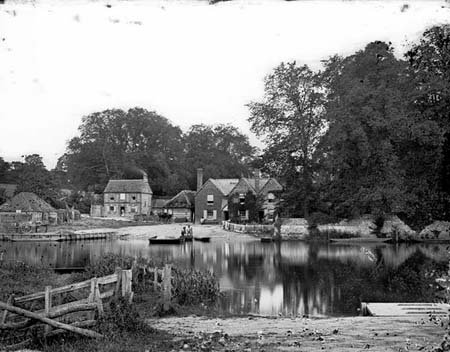 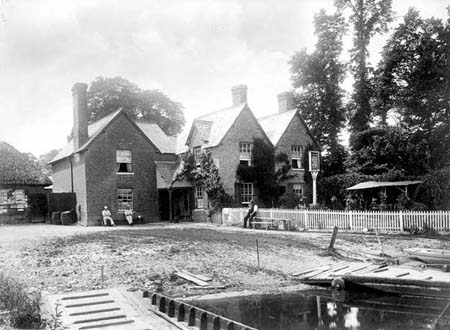 Moulsford Church and the Beetle and Wedge Inn are picturesque; 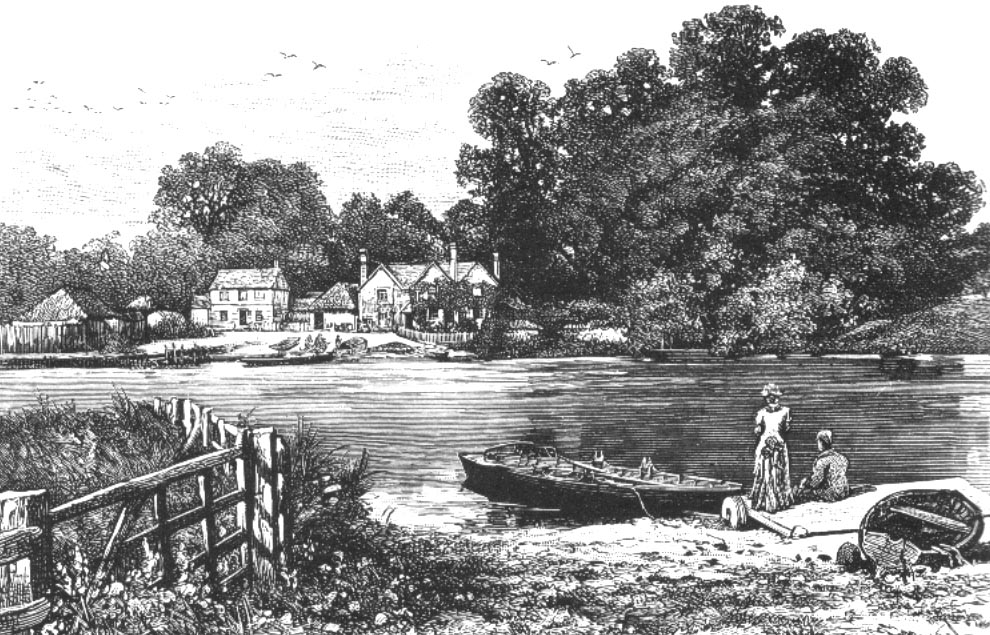 Nothing could be prettier than the little Beetle and Wedge, red and gabled, with a big landing-place almost at the front door

"The Magnificent Residential & Sporting Estate distinguished as Moulsford Manor" was for sale in around 1910. It included the Beetle and Wedge -

... the famous BEETLE & WEDGE HOTEL
This Old-established Riverside Hotel is well-known to all Oxford Graduates, as it adjoins the Reach on which the Trial Eights hold their meetings.
The House, which is pleasantly situated facing the River, is Fully Licensed, and affords every convenience for visitors making a stay on the river. It has a considerable number of Bed Rooms, and there is a good Tennis Lawn and Bowling Green attached, also Garage and Boathouse. The Ferry between Berks and Oxon is owned by the Hotel.
[ At Moulsford Manor House ] there are Fine Terraced Lawns leading gently down to the river ...
On the river bank are a substantial landing stage with seats and a Picturesque Boathouse timber built with thatched roof and room for four or five boats, with a private backwater to the river.
The Eastern Boundary of the Estate is chiefly formed by one of the longest reaches on the River Thames, a magnificent stretch of water affording Excellent Boating, Bathing and Fishing.

1910: Moulsford Ferry and the Beetle and Wedge in the Sale Booklet - 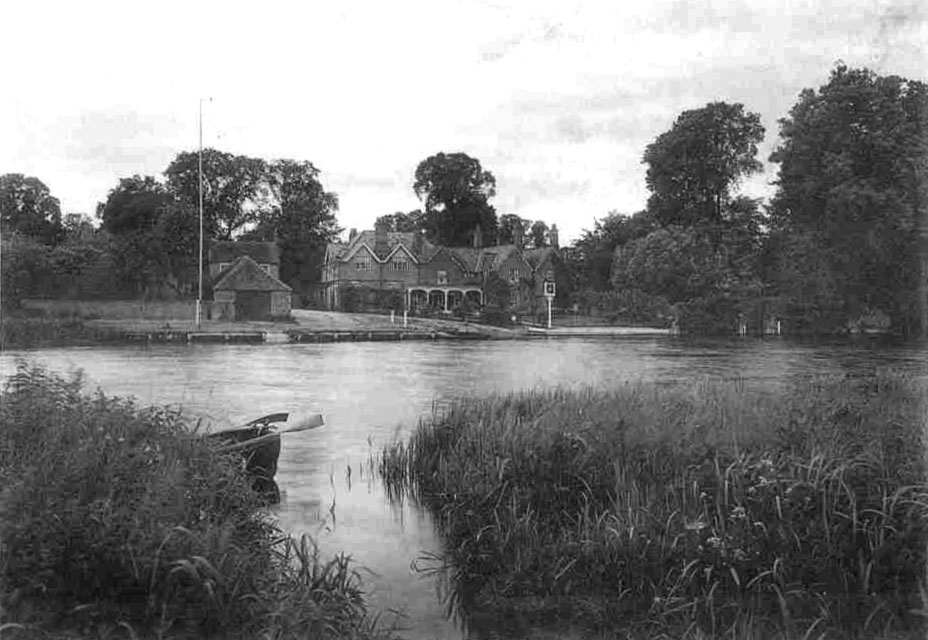 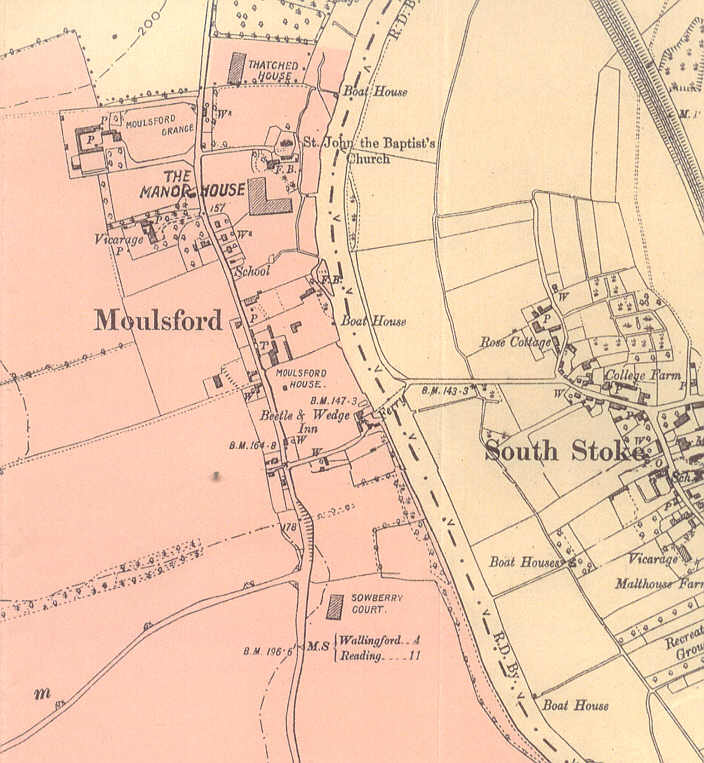 ... the Tamisis passeth most mildly between verie rich and fertile fields on both sides, by Monks-ford, which King Henrie the First gave unto Girald Fitz-Walter, from whence the Noble family of the Carewes is descended.

MOULSFORD, a village and a parish in Wallingford district, Berks. The village stands on the river Thames at the boundary with Oxford, ¾ of a mile S of Wallingford-Road r. station, and 3½ S by W of Wallingford; and has a post office under Wallingford. The parish comprises 1,429 acres. Real property, £1,707. Pop., 180. Houses, 35. The property belongs to H. B. Morrell, Esq.
A bridge of two brick arches, each 62 feet in span, here crosses the Thames.
The living is a p. curacy in the diocese of Oxford. Value, £60. * Patron, H. B. Morell, Esq.
The church is in the modern decorated English style, and has a wooden tower. Charities, £7. Bishop Barrington was a resident.

By-and-by, ... we glide into one of the most beautiful reaches of the river, which spreads out into the proportions of a miniature lake. There is little or no current. It is as if the waters gathered together here and rested, to make of themselves a mirror for the surrounding scenery.
The captain passed the word to back water, and then to ship our oars. We sat still to take in the scene.
Beech and elm and poplar, golden and bronzed with autumn tints, emerald meadows and sedgy banks, were reflected with patches of blue and white sky in nature's mirror. No one of us spoke. It seemed as if the scene had words for us - words that whispered in the trees an accompaniment to the songs of birds and to the deeper harmonies of distant villages. The influence of Nature in her gentle moods, amidst soft pastoral pictures of the slowly decaying year, is not conducive to conversation.
Taking up our oars again in silence, we hugged the shady shore, that we might not disturb the liquid glories of the panoramic reflections of the further banks. A succession of pictures seems to go floating by