The Swan at Streatley, left, west bank,just above the bridge (and above Goring Lock)

Having come up Goring Lock, when approaching the Swan, do not turn too soon, the weir is waiting ... keep well over to the right once you have turned.

Through the window of the Swan at Streatley - 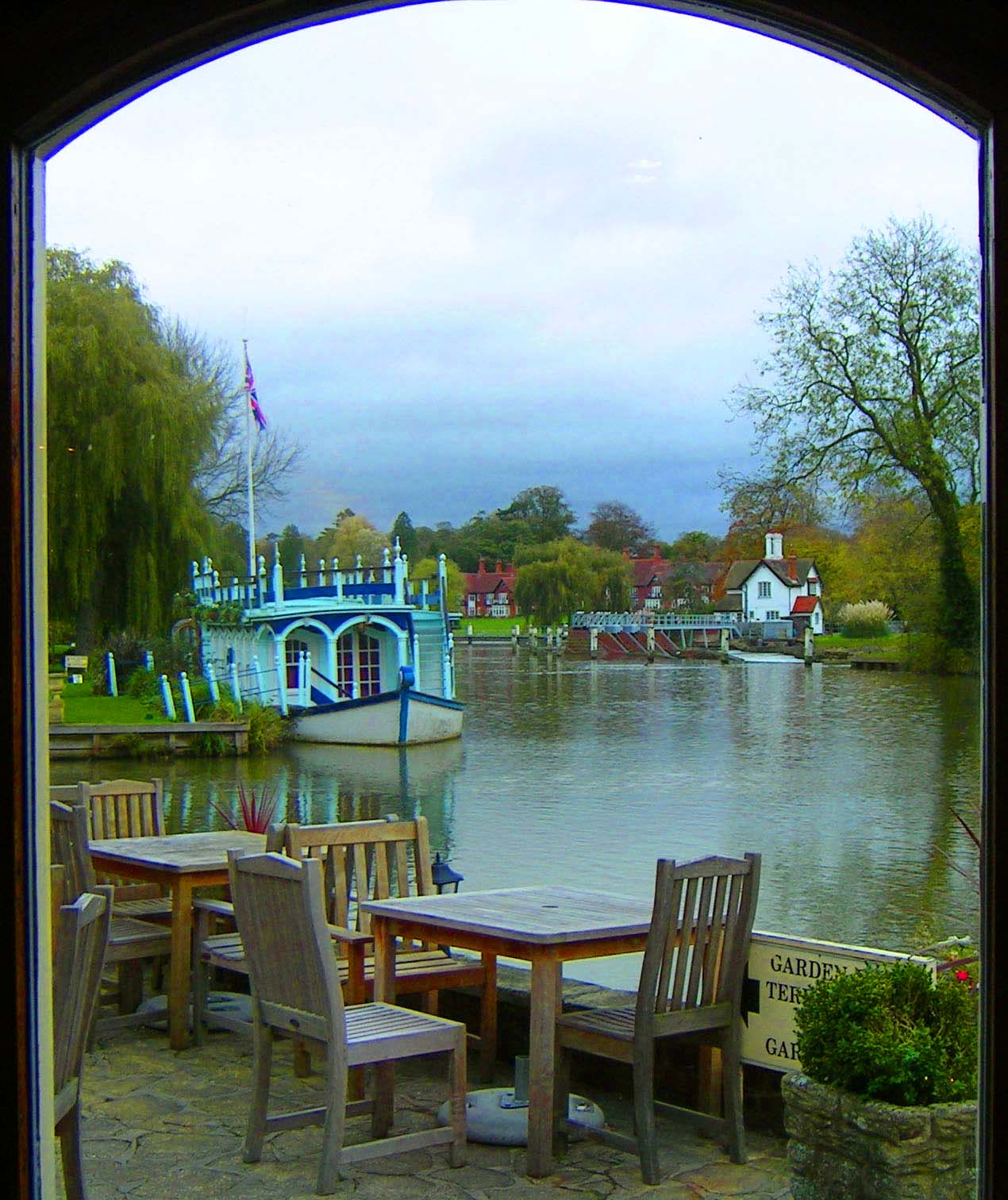 From the Swan at Streatley

Notice the Magdalen College Oxford Barge now used by the Swan at Streatley as a, rather different, conference centre. The Oxford College Barges were the original rowing clubs of the colleges: changing room; no doubt a bar; and grandstand - all rolled into one. They were superceded by the properly built boathouses needed to house the more fragile boats which soon developed when rowing became fashionable in the nineteenth century.

SAD AND DEPLORABLE NEWS FROM OXFORDSHEIR & BARKSHEIR
Sixty persons were drowned by accident in the lock through the watermens imprudently rowing too neer the shore of the Lock, they were by force of the water drawn down the Lock where they were all turned into the pool.

Readers, this story is both strange and true,
and for your good presented unto you:
be careful of your life, all sins to fly,
lest you by death be taken suddenly.
When he is sent, on you arrest to make,
no fees nor bail, can purchase your escape 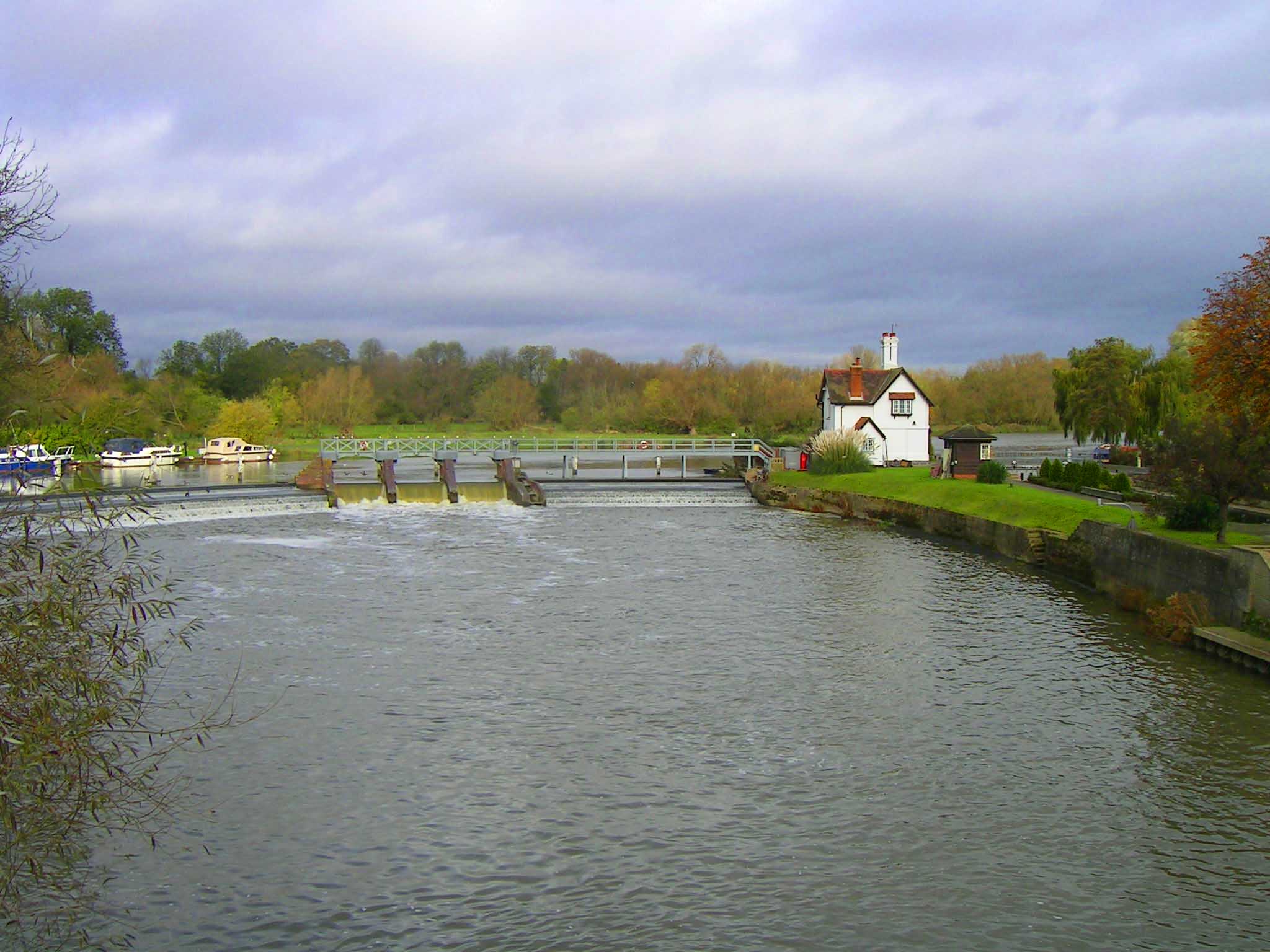 Fred Thacker says about this - "An account of an old time local tragedy".
[ Lock of course means weir. But sixty passengers (and more  some survived) in a ferry boat? It gives a very different picture of ferries to what I had imagined! I have thought about this and the only scenario that makes sense to me is this -
That the ferry was a large flat puntlike vessel which usually took heavy wagons across. However on this occasion (after the festivities in Goring on its Saint's Day) there were large crowds of Streatley people wanting to return home. No less than 72 of them crowded onto the ferry. But the ferrymen, used to large wagons, did not take seriously the weight of 72 people and took what was perhaps a usual path across the weir when the ferry was empty. The current must have been higher than usual and the weight gave the current a greater grip on the ferry and over they went. In those days few country people could swim.
The 'lock' ie weir was quite probably a couple of hundred yards downstream from the present weir.] 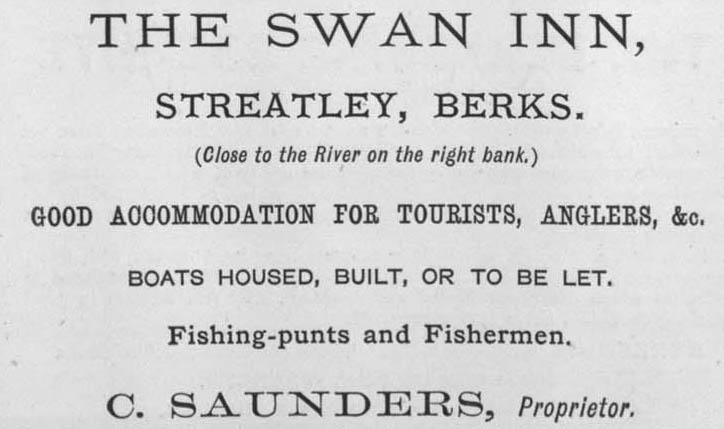 Each village has the virtue that Dr. Johnson extolled when he said that "the finest landscape in the world is improved by a good inn in the foreground."

The Swan at Streatley, Left bank above lock - 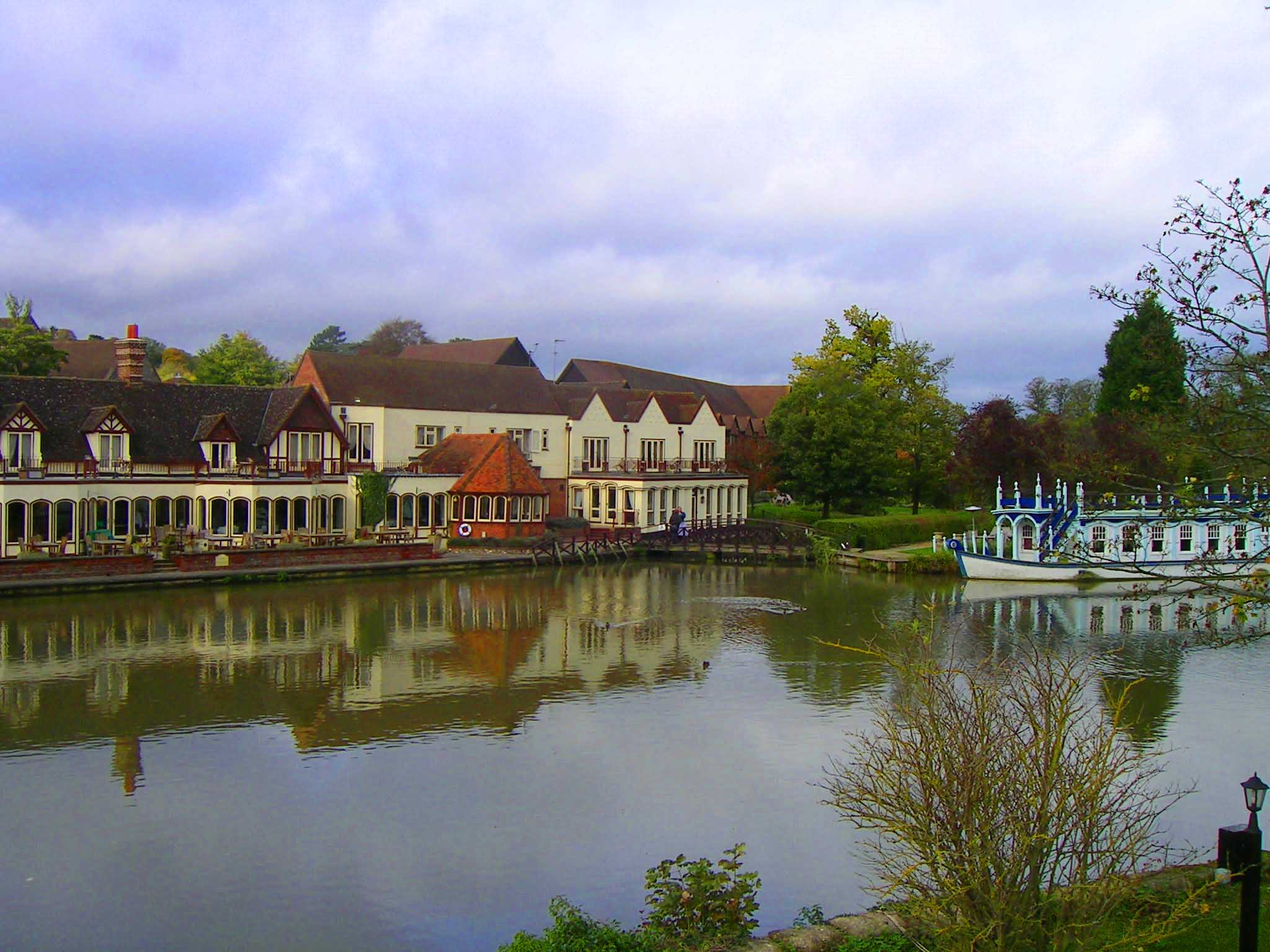 The Swan at Streatley from Streatley Bridge
"Sure never was a hostelry located half so sweetly ..."

At the Swan Goring boat club keep their punts (for members use).  Their other boats are at The Oratory Boathouse below Goring Lock. 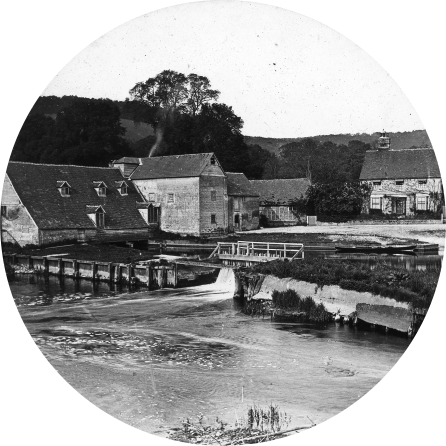 YES ! Here I am ! I've drifted down
The sun is hot, my face is brown
Before the wind from Moulsford town,
So pleasantly and fleetly !
I know not what the time may be
It must be half-past two or three
And so I think I'll land and see,
Beside the Swan at Streatley !

And when you're here, I'm told that you
Should mount the hill and see the view;
And gaze and wonder, if you'd do
Its merits most completely:
The air is clear, the day is fine,
The prospect is, I know, divine
But most distinctly I decline
To climb the hill at Streatley !

My Doctor, surely he knows best,
Avers that I'm in need of rest;
And so I heed his wise behest
And tarry here discreetly:
'Tis sweet to muse in leafy June,
'Tis doubly sweet this afternoon,
So I'll remain to muse and moon
Before the Swan at Streatley !

But from the Hill, I understand
You gaze across rich pasture-land;
And fancy you see Oxford and
P'raps Wallingford and Wheatley:
Upon the winding Thames you gaze,
And, though the view's beyond all praise,
I'd rather much sit here and laze
Than scale the Hill at Streatley !

I sit and lounge here on the grass,
And watch the river traffic pass;
Note a dimpled, fair young lass,
Who feathers low and  neatly:
Her hands are brown, her eyes are grey,
And trim her nautical array
Alas ! she swiftly sculls away,
And leaves the Swan at Streatley !

She's gone ! Yes, now she's out of sight !
She's gone ! But still the sun is bright,
The sky is blue, the breezes light
With thyme are scented sweetly:
She may return ! So here I'll stay,
And, just to pass the time away,
I smoke and weave a lazy lay
About the Swan at Streatley.

1901: Isn't it a good job that poets never copy one another's work? I guess the management wanted to use Ashby-Sterry's poem - but were perhaps refused permission and then obtained this - which is undeniably not the same - but only just!
Havelock Ellis, August 1901
Listen to 'A Haven of Rest':

A HAVEN OF REST

What you require is perfect rest,
Desist from work completely,
And of all the spots for you the best
Will be "The Swan at Streatley".

Thus spake my doctor; I obeyed
As patients should discreetly,
And so it came about I stayed
Within The Swan at Streatley.

Sure never was a hostelry
Located half so sweetly,
The silver stream glides peacefully
Before The Swan at Streatley.

The solemn elms, the willows grey,
Bend o'er the brink, and meekly
Amid the rushes wild fowl play
Hard by The Swan at Streatley.

In this sweet nook I found relief
And time passed all so fleetly,
The golden hours seemed far too brief
Spent at The Swan at Streatley.

And now refreshed in frame and brain,
Which had collapsed effetely,
My hope in parting is again
To see The Swan at Streatley.

And this to all is my advice
Put plainly and concretely,
"If you're in search of all that's nice,
Go to The Swan at Streatley."

See Goring Lock for comment about punting the Goring to Cleeve reach.