Streatley on the left, west bank and Goring on the right, east bank

The Goring and Streatley signs are on the Streatley, LEFT bank side so I assume I am correct in referring to the bridge as Goring Bridge. The bridge is in two halves with a substantial weir island in the centre. See Maidenhead Bridge for a bridge joining two communities with historically contested ownership! I have no wish to restart old quarrels - but I do notice that several old references are made to Streatley Bridge.

AT GORING
Where is the sweetest river reach,
With nooks well worth exploring,
Wild woods of bramble, thorn and beech
Their fragrant breath outpouring?
Where does our dear secluded stream
Most gaily gleam?
At Goring.

Where sings the thrush amid the fern?
Where trills the lark upsoaring?
Where build the timid coot and hern,
The foot of man ignoring?
Where sits secure the water vole
Beside her hole!
At Goring.

Where do the stars dramatic shine
'Mid satellites adoring?
And where does fashion lunch and dine
Al fresco, bored and boring?
Where do we meet confections sweet
And toilets neat?
At Goring.

Where are regattas? Where are trains
Their noisy crowds outpouring?
And bands discoursing hackneyed strains,
And rockets skyward soaring?
Where is this urbs in rure? - where
This Cockney Fair?
At Goring. 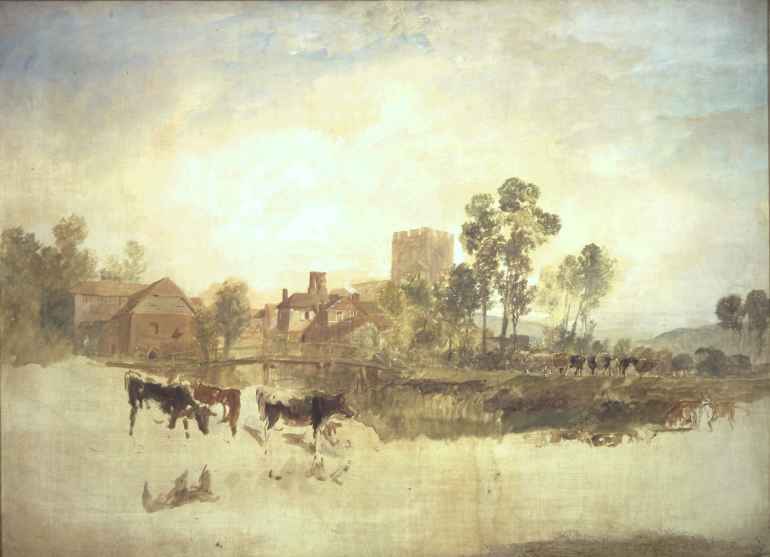 the twin villages of Streatly and Goring — the former in Berkshire, the latter in Oxfordshire, joined by a long and picturesque bridge, from which a fine view is commanded of the river, with its gracefulwindings and its pretty "aits" above and below, and especially between the bridge and the lock, distant some half a mile apart. These villages of course contain churches; that of Goring, however, is by far the most interesting; it stands close to the water-side, and beside it are a graceful cottage and a busy mill. *
* Nearly a century has passed since the village of Goring was "famous" "on account of the virtues" of a medicinal spring in its immediate vicinity: it was called "Spring-well", and was situated on the margin of the Thames. It is particularly mentioned by Dr. Plot (in the reign of Charles II.) as celebrated for its efficacy in the cure of cutaneous disorders, and also for ulcers and sore eyes. Much more recently, however, it was considered "a valuable specific"; for its then owner, Richard Lybbe, Esq., published several advertisements, wherein he states "that other water had been substituted and sold for that of Goring spring"; and he informs the public that, to prevent such deception, every bottle or vessel hereafter filled with the genuine water shall be sealed with his arms, of which he gives a particular description; and that the persons appointed by him to seal and deliver it shall demand nothing for the water, but a penny a quart for attendance and impress of his arms. The value of Spring-well, if it ever had any, has long ceased to be appreciated. The spring now gives its supply to the Thames without fee or reward, and the "penny stamp" is a tradition of the past. 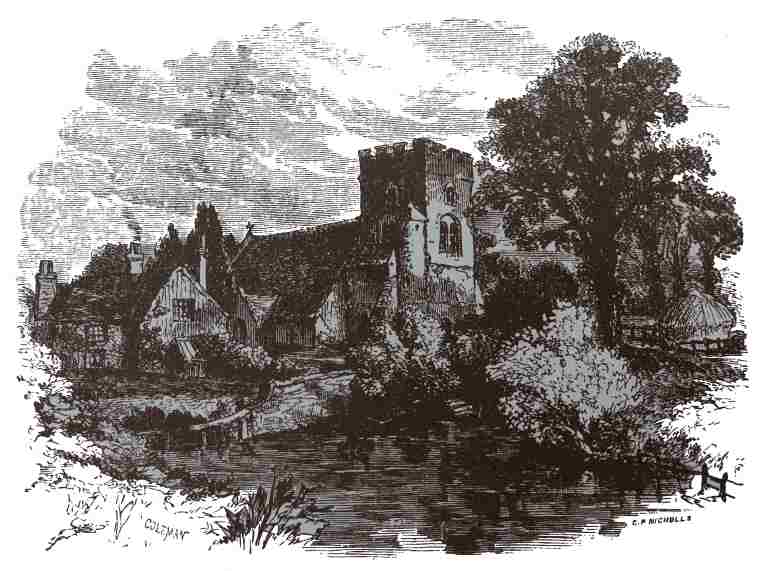 The church is of Norman foundation, but the tower only preserves the peculiar features of that style. It is very massive in construction, with round-headed windows, divided into two lights by a central pillar; a winding stair to the belfry is formed in a small round tower, appended to the north side of this square tower. The body of the church is much more modern — a circumstance by no means uncommon in English ecclesiastical architecture. It has been recently restored in very good taste; but while it gratifies the ecclesiologist, it offers few antique features on which the architectural student can dwell.

The houses at Goring are excellent examples of those "peasant homes" which nowhere exist more happily than in our own favoured isle. The cottages have that look of comfort so essentially English, and their little gardens are trim and neat. Its opposite village has equal claims to attention, and is more romantically situated on the hill-side. The scenery is the most striking we have yet met in our downward course.

1873: The Bull at Streatley, advertisement - 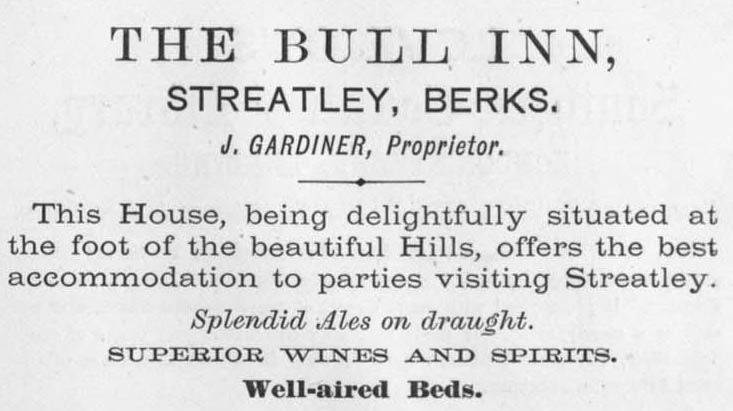 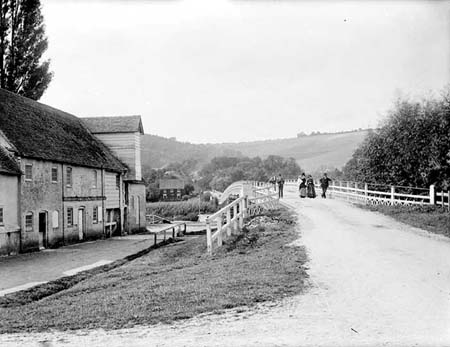 Close by Goring church is the mill, which eclipses that at Streatley in appearance, and shows adaptability in applying its power as an electric generating station, while Streatley remains conservative, and still grinds the sweet-scented white flour. But the electric charging has not spoilt the mossy roof, gleaming green and russet alternately, or the pretty pigeon-house from which flocks of white pigeons often sweep round over the glistening water and the low islands. A very large and neat boat-house lies below the bridge on the Goring side.

Goring on the right* bank and Streatley on the left* are both or either charming places to stay at for a few days.  The reaches down to Pangbourne woo one for a sunny sail or for a moonlight row, and the country round about is full of beauty.  We had intended to push on to Wallingford that day, but the sweet smiling face of the river here lured us to linger for a while; and so we left our boat at the bridge, and went up into Streatley, and lunched at the Bull,  much to Montmorency's satisfaction.
They say that the hills on each side of the stream here once joined and formed a barrier across what is now the Thames, and that then the river ended there above Goring in one vast lake.  I am not in a position either to contradict or affirm this statement.  I simply offer it.
It is an ancient place, Streatley, dating back, like most river-side towns and villages, to British and Saxon times.  Goring is not nearly so pretty a little spot to stop at as Streatley, if you have your choice; but it is passing fair enough in its way, and is nearer the railway in case you want to slip off without paying your hotel bill.
We stayed two days at Streatley, and got our clothes washed.

*right & *left have been changed for reasons explained in [about] in the three line menu, top right 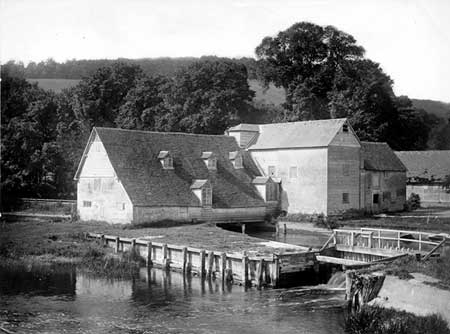 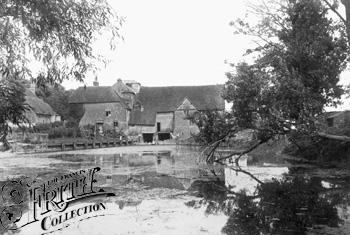 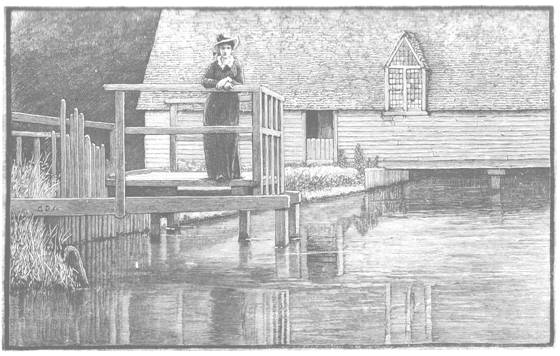 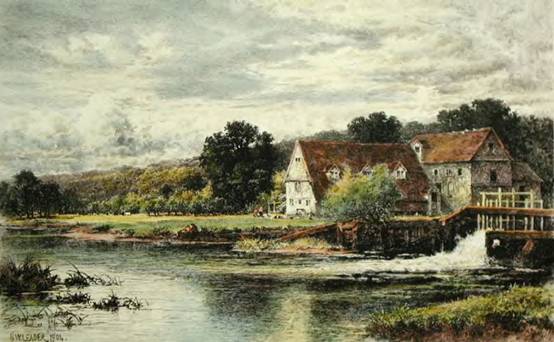 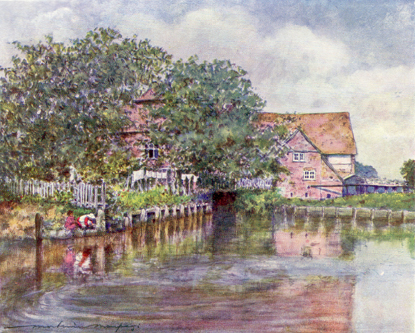 On the whole Streatley certainly must be allowed to be a sweet place.  The last time I was there was on a glorious autumn day in September, succeeded by a moonlight night equally perfect, and I must say I felt quite ashamed of myself for grudging my artistic brothers the pretty spot.  In the summer of 1874 my wife and I visited Streatley, the beauties of which are so attractive to the artist fraternity.

1810:  The Commissioners invited local subscriptions towards a carriage bridge.  Failing this they decided upon a horse bridge.
1837:   A timber bridge was constructed.  The tolls were as follows: 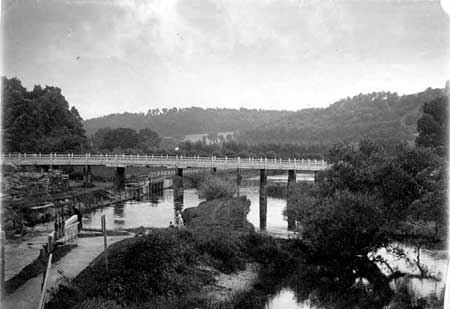 Whilst here I was one day summoned by the toll-keeper on the bridge, for evading the toll. I went daily across the river in my punt, to sketch on the opposite bank;  and as this was done within a mile of the bridge, the man charged me with evading the toll, according to the reading of an old Act of Parliament. I was advised that it was a claim that could not be maintained, and I determined to fight it out;  accordingly I appeared before the magistrates at Reading to answer the summons in person;  when, after reading the Act, and considering the case, the bench gave it against my summoner, and he had to pay thirteen shillings costs.  It was a most absurdly arranged Act, for it appeared by the strict letter of the Act, that if any one who was towing a boat up the river, should get into the boat to cross over, or walk across the gates of the lock where the tow-path changed sides, he would be liable for evading the toll of the bridge;  this case, they told me, had been tried several times, and had always failed. 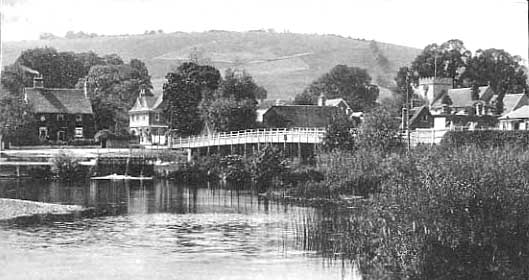 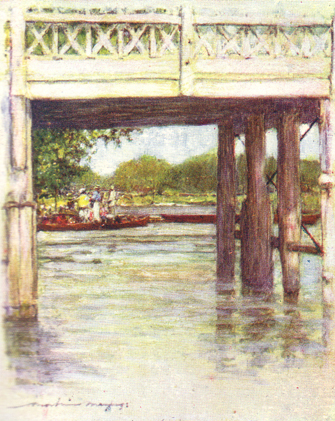 It [the old Goring Bridge] is an excellent example of the old time timber bridge;  and is, I think, the only important structure of the sort now surviving upon the river.

[ Again Fred Thacker only has to say how appreciated some structure is for its immediate replacement! ]
1923:  New Goring Bridge built. The supports are an interesting mixture of timber, and concrete imitating timber.

Streatley Bridge stands near the site of an ancient ford, for the Icknield Way crossed the Thames a little lower downstream at the foot of Ferry Lane, Goring.
The modern bridge, replacing the old timber bridge built on 1837, is constructed of reinforced concrete piles and beams with oak struts and trellis balustrade.
Each channel of the river is bridged by a single span

[ Each channel by a single span? Not as I understand it! ] 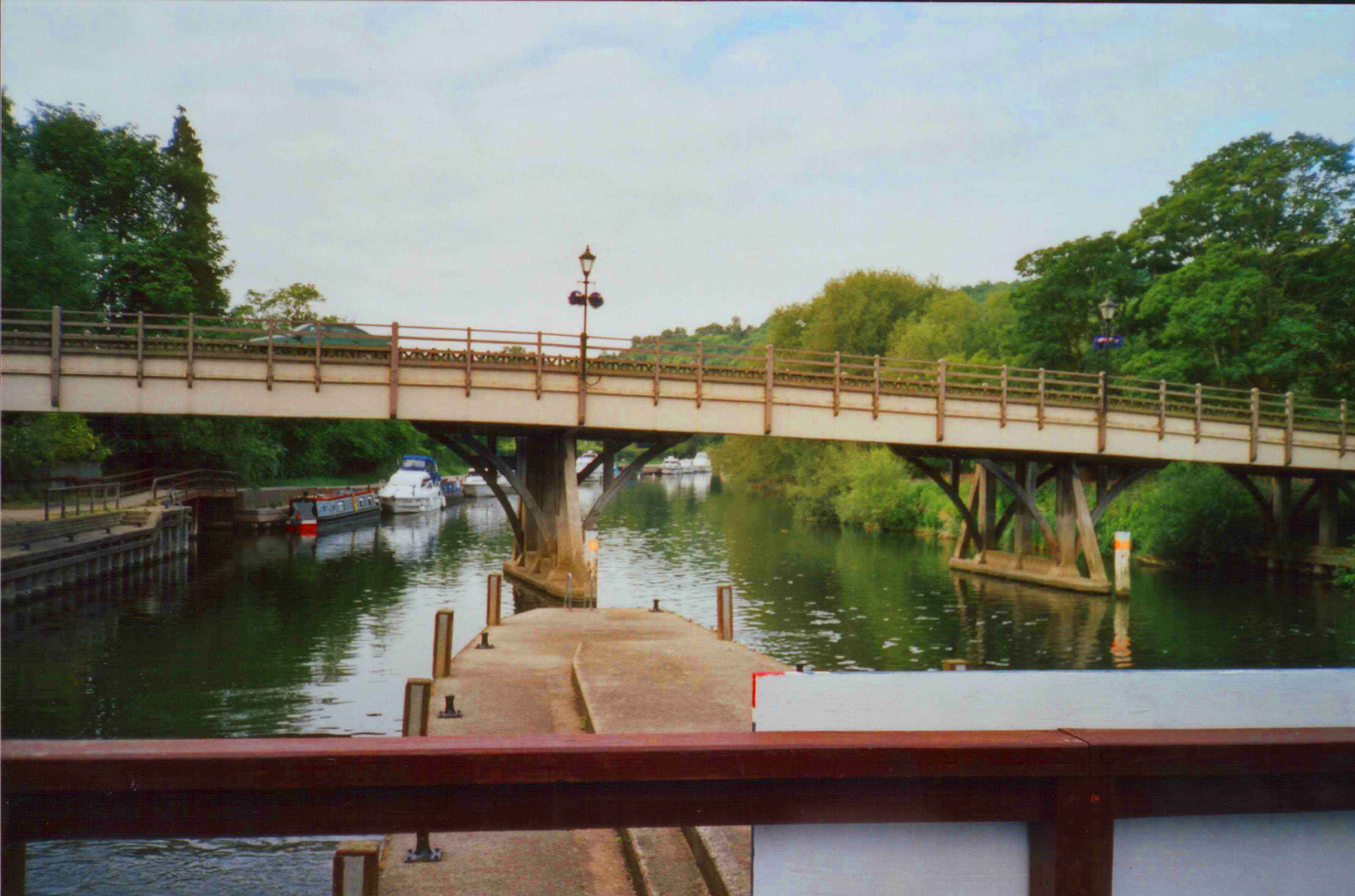 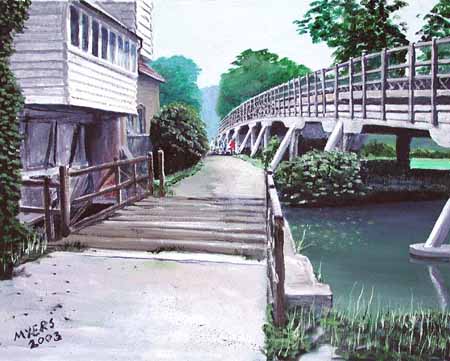 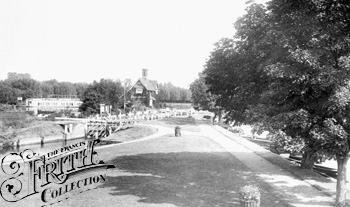