RIVERSIDE SUNDAY, Punch
Unnumbered are the trees that fling
O'er Pangbourne Reach their shade
Unnumbered there the birds that sing
Melodious serenade
But as the leaves upon the boughs
Or feathers on the birds,
So are the trippers who carouse
Along the banks in herds.

Punt. centre-board, launch, skiff, canoe,
Lunch-laden hither hie,
Each bearing her expectant crew
To veal and chicken-pie;
And from the woods around Hart's Lock
Reports ring loud and clear,
As trippers draw the festive hock
Or democratic beer.

From one to three, below, above,
Is heard the crisp, clear crunch
Of salad, as gay Damons love
To linger over lunch.
From three to six a kettle sings
'Neath every sheltering tree
As afternoon to Phyllis brings
The magic hour of tea.

Well may the Cockney fly the Strand
For this remoter nest,
Where buses cease from rumbling and
The motors are at rest.
But would you shun your fellows - if
To quiet you incline -
Oh, rather scull your shilling skiff
Upon the Serpentine!

Immediately above Pangbourne, the river is hemmed in by a steep chalk hill on the Berkshire side, and the fine oak trees of Combe Lodge on the Oxfordshire side, until a bend is reached where the oak trees end with a good old-fashioned boat-house beneath their shade.  From here the waters expand into a grand open reach, with cliffs and beeches of Harts Wood at the end of it;  the punting is not particularly good.  By all means sail if you can, as then the beauty of the view can absorb your whole attention, and be enjoyed in perfect repose.

An osier farm on the right is the first thing reached, with large barns for storing the dried osiers, stacks thatched with bark, and all the usual appliances for rod pealing, &c. 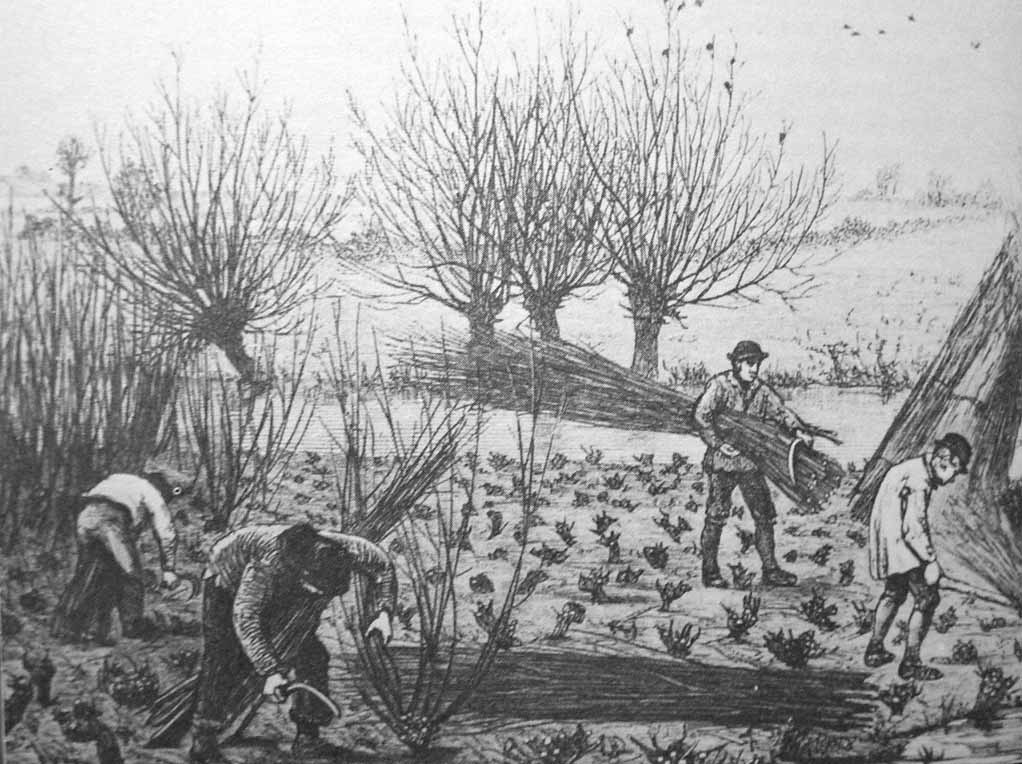 This osier farming is still a lucrative river business, and is carried on at many places up the Thames.
The withies are cut from the eyots and tied in bundles;  they are then carried in punts and placed in a sort of water pound, all close together, with their thick ends in the water;  here they shoot out and grow much longer.
At the time of rod pealing the bank presents a very lively appearance, rows of boys and girls and old women, all working away together, drawing the osiers through two pieces of iron, which scrape the bark off quite clean, and it is astonishing to witness the rapidity with which the beautiful white wands come out of their skin;  these white wands are what the wicker baskets and chairs are made from. 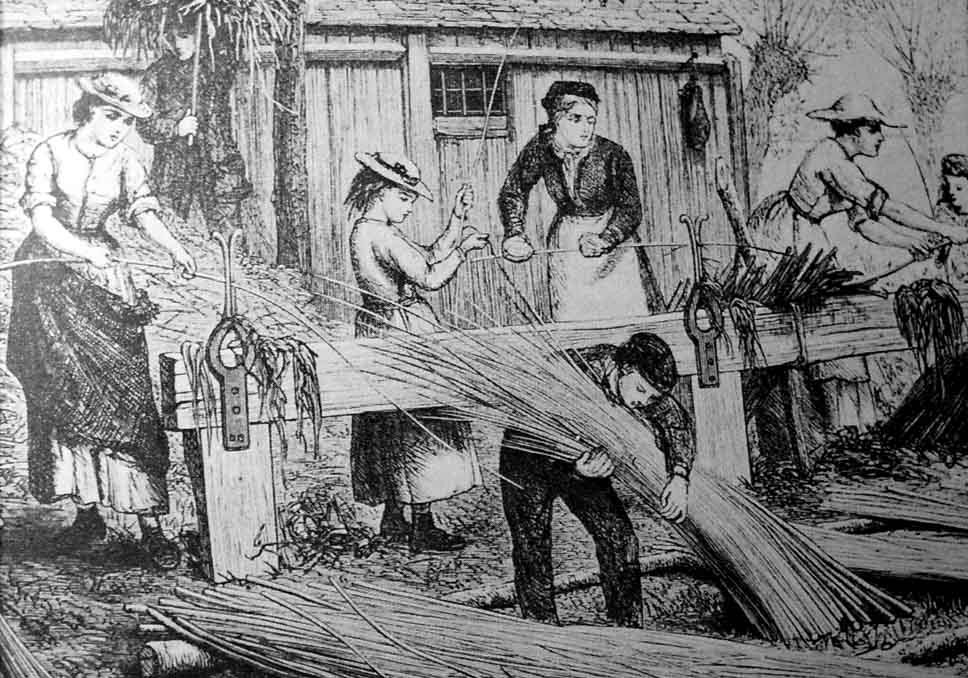 Wicker work is always in good and artistic taste, as it is a handicraft that machinery has never been able to tackle.  I am very glad to see a growing demand for the pretty garden chairs and drawing-room furniture made of wicker-work;  they are light, elegant, and very strong.  The late Mr. E. W. Cooke, R.A., when young, learned the art of basket-making, and was quite expert in this line, and I do not see why some of the enterprising young ladies of the present day should not take up this craft.  I like all wicker work;  even common hampers afford me pleasure, their aromatic smell when new reminding me of the river.
The vitality of the willow tribe is very remarkable;  I have before now grown withies from old hamper twigs, and you may often notice the little grey catkins coming out in their appointed time on old willow sticks, when stowed away in some dampish place;  the old pollard stumps too, as they fall to pieces, are ever ready to become the parent stocks of a new tree.  The smell of an osier farm is to me most pleasant;  it has lately been discovered very wholesome also, for from the willow is made the salicylic acid, so fine as a tonic, and a cure for rheumatism.  No doubt without this native blue gum tree our marsh lands and riversides would be far more aguish and rheumatic than they are.  The fibrous roots of the Willow, seen at the edges of the river, are of a pretty red colour;  I have sometimes taken people in by calling them freshwater coral.  There are, I believe, thirty or thirty-five known sorts of willows in Great Britain, but I know not enough of botany to trouble my readers with their names.  I have a great predilection for one variety, which in beauty exceeds all others on the river; this is not the ordinary useful osier used in basket-work, the leaves of which are long and narrow, but a much more bushy sort, with leaves and foliage like the myrtle.  It possesses far greater variety in its growth, and  its colour is more refined and delicate than other sorts.  The leaf-stems are golden coloured when young, the leaves of a dull olive on the upper side and pale grey beneath;  at the end of each little shoot one or two leaves are tipped with golden orange.  The whole shrub grows beautifully, and forms fine masses and shapes;  it takes far more light and shade than its more useful brethren;  it does not blow about in such a weak way as the others, which gives such a cold chill to the colour of a bank on a windy day.  I am very fond of all willows except one, and that is the weeping willow so often placed on lawns by the river side, but which only reminds me of tombstones, hair-brooches, and In Memoriam cards.

Here the magnificent scenery opens up in scale, a wide vista of hills to the one side and flat land to the other.  The river feels bank full and the flat land on the left bank appears to be below river level. 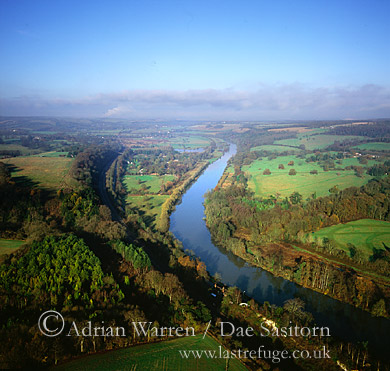 Beale Park's the place to be with fun, adventure, animals, gardens, play and activities on the banks of the picturesque River Thames.
A great day out for all ages near Pangbourne in Berkshire.

'Harts' is the name of at least 8 river features up and down the Thames - the result probably of naming things after people - and then the people move)
1580-5:  Bishop names it "Harts"
1720: Camden - a fish lock
1746: Griffiths: passage free
1791:  Mylne: free and open. Was a pen and Wear formerly;  a Tumbling Solid Wear;  and two sets of Bucks and Gates
1802:  Mylne: Hart's Old Wear, the ruins of it very inconvenient
1811:  Commisioners' Report: Hart's Old Lock is gone to decay, and is without shutting tackle, but pens a small head of water above and causes a shallow below.

Harts Wood with its pretty group of aits and its well know chalk pit, is like Streatley, a gem of Thames scenery, and forms the beautiful connecting link between that place and lovely Pangbourne.
In the autumn particularly, when its beech woods are golden and red with fallen leaves, this gem in its setting of hills is truly a charming place. 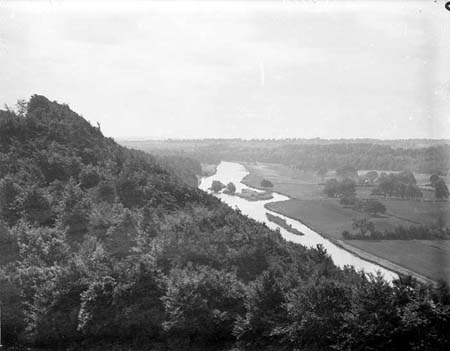 ... the beautiful Hart's Wood reach commences, resembling in many respects that of Cliveden.  Here are similar eyots in the bend of the river, and on the right beech woods coming down to the water's edge.  There was formerly a lock and weir amongst these eyots, the narrow passage on the tow-path side being evidently the situation of the lock, and a few old stumps of piles still exist about the spot.

1916:  Fred Thacker saw barges removing piles from the site of Harts Lock and photographed them 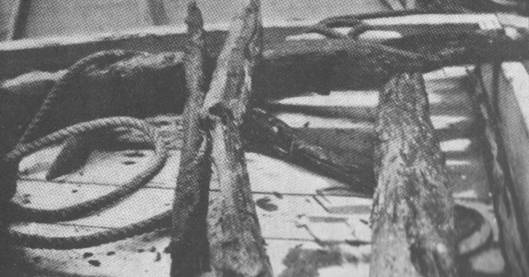 Hart's Wood possesses a Lovers' leap;  it is to be found on the path from Whitchurch to Goring ... which here  runs for a short distance on the edge of a steep cliff.  I never heard who the lover was that leaped.  The wooded hill ends much sooner than the celebrated Cliveden range, and great undulating ploughed lands succeed which fall away gradually as we approach Goring. 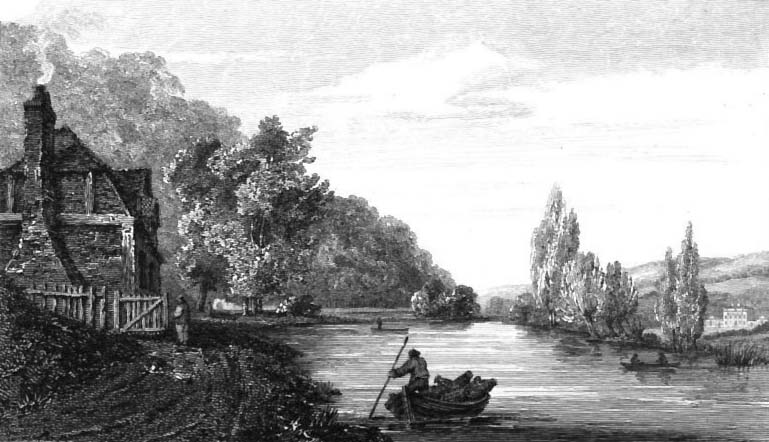 The view of these two places is taken from Pangbourn ...
[Basilden Park] has somewhat of antiquity connected with it, being mentioned in the Domesday book, as then held by Miles Crispin of William the Conqueror. Its manor and church were afterwards granted to the Abbey of Reading, as appears from the confirmation of the charter of Henry the Second, its founder, by Hubert, Archbishop of Canterbury, and Robert, Bishop of Sarum. It afterwards formed a part of the great possessions of Edward, Duke of Somerset, who was executed in the last year of Edward the Sixth; and after various successive grants, &c. this manor and estate were finally conveyed, in the year 1671, to John Breadon, Esq. whose descendant is the present possessor of them.
This view comprehends the upper part of Basilden Park, a place which may boast a very large portion of decorated, sylvan beauty, both from nature and disposition. The park was improved by Mr. [capability] Browne, and is one among the many proofs which he has left of excellence in his art.
The house was erected by the late Sir Francis Sykes, after a design of that eminent architect, Mr. Carr, of York. It is a large regular edifice of Portland stone, with correspondent wings, and a central loggio in the principal front. The prospect from it is very rich, but, strange as it may appear, not a glimpse is caught, from the principal floor, of the river which flows beneath it. The attic storey alone catches sight of the Thames.
The other part of this view embraces Combe Lodge, the seat of Samuel Gardner, Esq. in the parish of Whitchurch.
It is an handsome villa, constructed within a few years, and is situated in the centre of an acclivity, which gives it a very commanding view of the Thames.
The Grotto House presents a very pleasing object on the opposite bank of the river, behind which, Basilden and its woods, with the Streatley Hills, rise in great beauty.