Just below Purley on the left bank, set in the great brick wall of the railway appeared a common enough object that might not at first sight have excited particular interest until you think about it ... 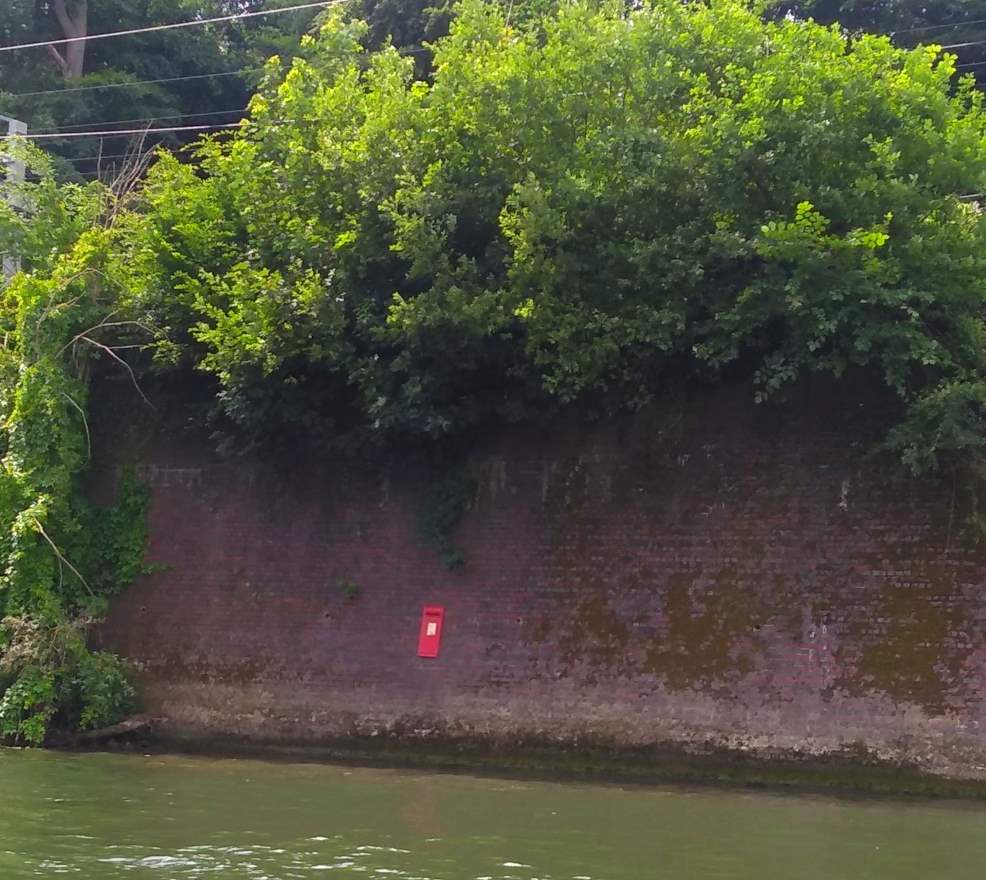 Postbox in the railway wall just below Purley,

I suppose it should be classed as installation art. It seems to me a splendid example of understated public humour.
A similarly enterprizingly placed postbox also appeared on Sonning Bridge. Predictably it has now been removed.

(2017) We supply moorings for craft of various sizes in beautiful countryside along the River Thames between Reading and Pangbourne. Boats are moored in a creek, in 10 acres of private fields and woodland. You may park your car in a small garden beside your boat. There is a water supply, a slipway with winch, and a toilet. Electricity is available to some moorings.
Telephone 01189 428116 9.30 - 10.30 am Mon - Fri.

1793:  Pangborn and Whitchurch from Purley, Boydell - 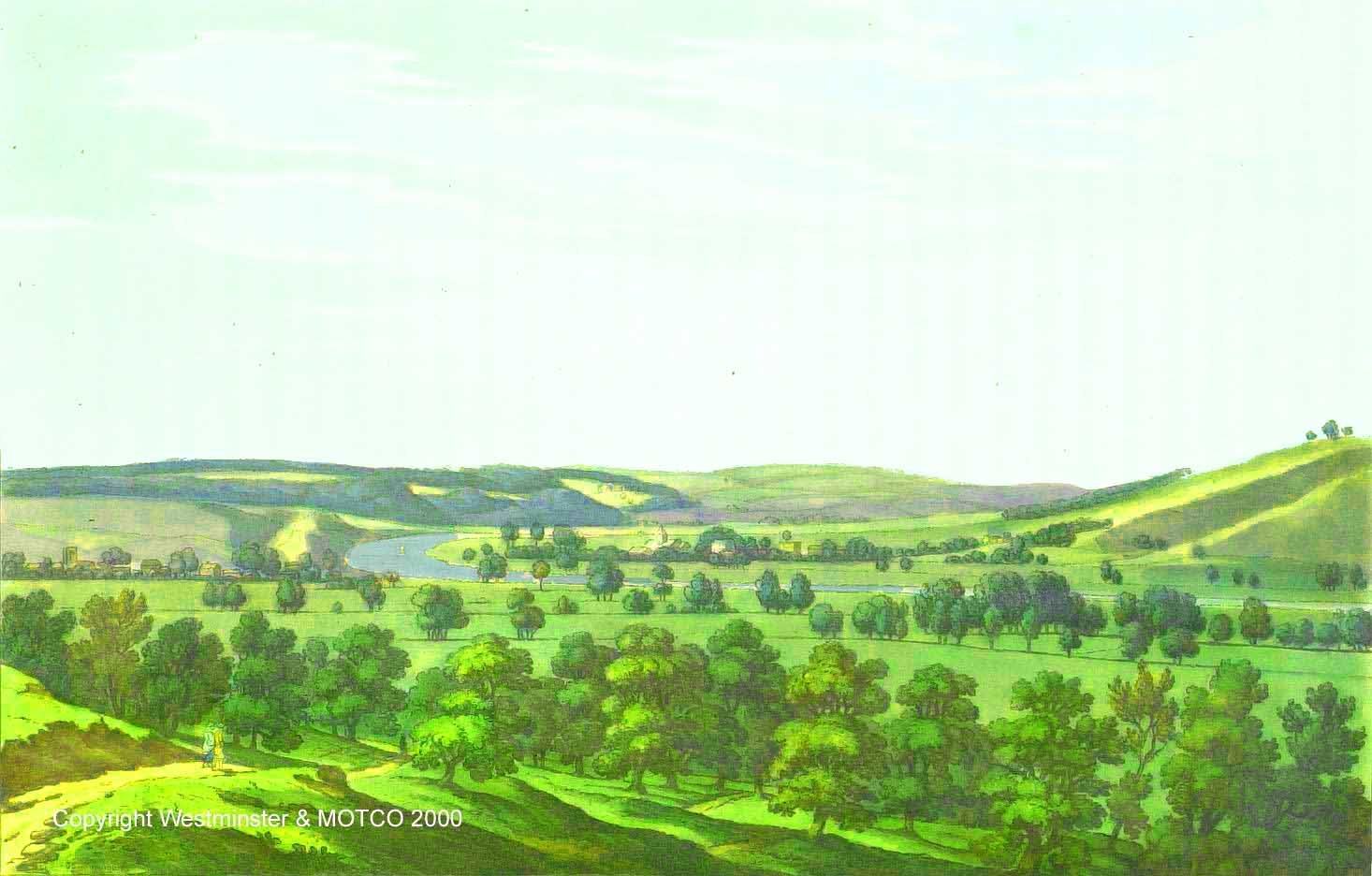 Sites of former Ferries by the Roebuck and by the church

When Mapledurham Lock had been built in 1777, and it became desirable to extend the horse towpath thither from Tilehurst, a piece of local prejudice intervened. In June of this year a Mr Worlidge claimed exemption, under the Act of 1770, from selling or letting land in Purley meadow for a towpath. The commissioners threatened that unless he yielded amicably they would acquire it over his head. He was still obdurate in the summer of 1780.
"Inconvenient it is to take off the horses at Mr Worlidge's field, and go thro' a Lane round his house. It occasions a delay of half-an-hour, besides the additional labour."
Worlidge now fell too ill to continue the debate. The trouble persisted; and in 1794 the Commisioners established a double ferry to avoid towing past Purley farm; one boated being installed against the Roebuck and the other about a third of a mile higher, by the church.

Fred Thacker goes on to write:

Next year [1795] Benjamin Cottrell of Pangbourne, towing contractor from Kennet Mouth to Gatehampton, complained of

"the danger and delay of setting the horses over at the two new ferries established at or near Purley. The danger being occasioned by the rapidity of the stream, and the time taken in passing is half an hour more than by the former towing path and passage round Purley House and church, by which the flashes in short water are frequently lost."
There were several other complainants. 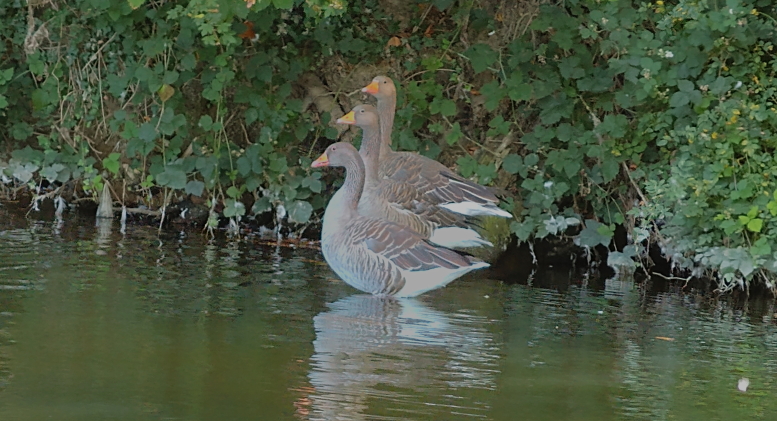 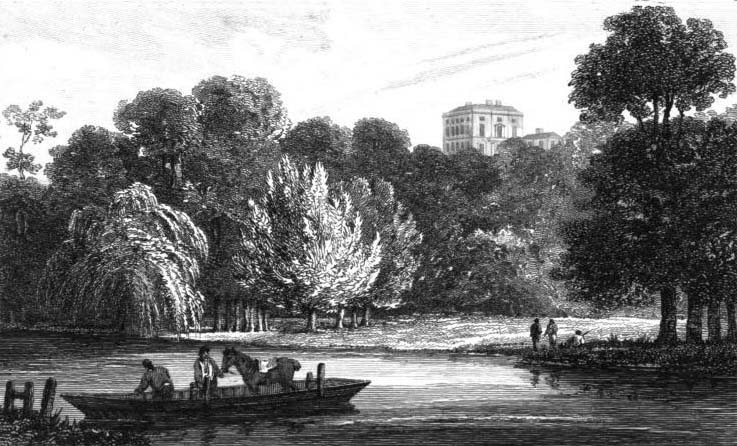 [Purley] is situate on the Berkshire side of the Thames, about four miles from Reading, in the road to Wallingford.
The particular part of it which is the subject of the engraving is the seat of the late Anthony Storer, Esq. a gentleman well known in the literary and fashionable world. This spot was formerly in possession of the Bolingbroke family, and, we believe, formed a temporary residence of the nobleman, who, by his superior talents has given so much celebrity to that title. By his immediate successor, it was separated from the family property, and, after several changes in its owners, became finally vested, by purchase, in Mr. Storer, who erected the present house, and was indulging his fine taste in decorating its environs, when he was called to his long home.
The mansion is on a plan in which elegance and accommodation have been united: it was suggested by the owner, with such improvements as the best professional assistance could give. The situation is inexpressibly pleasing. The shape of the grounds is of the happiest cast; and it need not be added, that nature would receive every help that art could offer, when it is considered, that the work of improvement was entrusted to the direction of Mr. Repton, the first landscape gardener of his own, and perhaps any other day.
When, therefore, we add to intrinsic beauties the charm of the river which flows before it, and the range of rich, woody, upland country, on the opposite side of the stream, more need not be said to enhance the character of the place, which was, in every respect, suited to that of the late amiable owner of it.

Ben Viljoen, Berkshire Gardens Trust, tells me that When Purley Park was about to be built there was some discussion as to where it should be sited -

In November 1793 Anthony Morris Storer who had just acquired Purley Park, arranged to meet Humphry Repton at Purley so that Repton could advise him on the layout of his recently acquired estate. They spent two days together and Repton produced a Red Book that contained his recommendations.
It is clear from the Red Book that Repton wanted the new house to be built next to the old one close to the church and by the river. Storer was against this idea and suggested two places on higher ground. Repton put forward all sorts of reasons why his position would be better - the views would be more pleasing and the house had always been closely associated with the river.
He also put forward ideas of what could be done to ensure that the new house would not be flooded including widening and deepening a stream so that the excess water would flow away from the house and the spoil could be used to cheaply raise the ground on which the new house would be built. He also mentions an added benefit, the wider stream would discourage bargees from intruding into the grounds.
The very next yeat there were severe floods which convinced Storer that he was right. The new house was built on higher ground as shown in the 1811 engraving [above].

I once showed this engraving at a lecture that I was giving and someone pointed out that the horse looks more like a hunter. No reason of course why the gentry doing a spot of hunting on the other side of the river should not also use the ferry!
Perhaps because Repton's recommendations were ignored the Purley Red Book survived better than the ones where the owners were always showing their visitors what had been done. It was never published and is still in private ownership but there is an excellent account of the book by the Swiss academic André Rogger in LANDSCAPES OF TASTE, The Art of Humphry’s Red Books, published in 2007.

As to the horse this is what Fred Thacker said - The Thames Highway, Volume 2 p.227 -

John Bickerdyke animadverts upon these ferries in his Thames Rights and Wrongs. respecting their refusal strict reservation to navigation uses. No doubt their refusal to casual pedestrians constitutes an occasional grievance; but this writer ignores the fact that these and other ferries were not in existence before the Commisioners instituted them under restrictive covenants with the riparian owners purely as a convenience to the barge traffic. They are emphatically not immemorial links in a public highway.

[On the left bank] the village of Purley, the small church of which stands close to the bank, buried in a grove of towering trees. Purley Hall, on the [left bank], on high ground, is a plain, square, modern villa.
The towing-path is closed where the grounds of Purley reach the Thames, but is continued on the opposite [right] bank of the stream, so that men and horses have to be ferried across, and continue their journey for about a quarter of a mile, when they reach Purley Ferry, and are again carried across to the [left] bank, where the ferryman's house is situated, from whence the path continues to Caversham Bridge.

It was about here, in the cool of the evening, that the anglers awoke. From a punt, where a young lady in big hat and green ribbons, and a man in a blue flannel jacket, sat side by side under the shade of the Mapledurham Ferry, we heard a jubilant cry, "O Paul, already!"
And Paul drew up his line and a man in a near boat paddled up to see, and on the hook hung a fish no longer than a minnow.
And next, an old man, in a long alpaca coat and tall hat, waved his hands towards us and begged our help. He had a bite, and for half an hour had been trying to get his fish out of the water.
"A whale!" asked Joseph. "No, a young shark", answered another elderly man dancing around the alpaca coat in excitement.
Joseph with a scull pushed gently under the line, and the old man pulled and pulled, and at last, up came a bunch of weeds.

[ When I was punting along here I had a similar request from a young angler. His father would kill him if he didn't bring back the special hook he had borrowed, and it was caught under water. I tried to free it with my pole with no luck. So in the end I caught the line and hauled up for all I was worth. A large canvas bag reluctantly came up. I could not free the hook and so I had to cut the canvas. The canvas bag submerged again - and has only since surfaced in my dreams. What could have been in it? I decided then - and still think I was right - that I did not wish to know. ]

The river from the Roebuck to Maple Durham is of perfect beauty;  overhung with wide spreading trees, its banks decorated with flowers of every sort, the water as clear as could be wished, with dark streaming weeds curling and swirling beneath, the poetry of the whole heightened by occasional glimpses of the romantic house of Maple Durham;  these beauties, together with the sound of rooks and cooing of wood-pigeons, renders this spot dear to all river-lovers' memories.
There is only one thing to wish for when passing this lovely spot;  that in it you may not meet a hateful steam launch, fouling the water with its screw, scaring the rooks with its discordant whistle, blackening the air with its dirty smoke, and robbing the view of all its calm sentiment and beauty.

[ See Monkey Island and "Captain Jinks of the Selfish" ]
1889: Jerome K Jerome [and this is one piece of evidence for Leslie as a source for Jerome (albeit a negative one!)]
[Reading Lock is presumably Caversham Lock] -

At Reading lock we came up with a steam launch, belonging to some friends of mine, and they towed us up to within about a mile of Streatley.

[ So much for Three Men in a Boat and their manly endeavours!
I cannot help thinking all the time that Jerome has read Leslie and reacts.  When Leslie deplores the steam launches then Jerome takes a tow from one! ]