The river becomes very lovely from a little above Reading.

Above [Caversham] bridge the water is broad and deep.  A quaint old garden runs along the Oxfordshire shore for some length;  the meadows on the other side, which are flat right away to the railway, are much flooded in winter.  The ground on the Oxfordshire side is steep, small white cliffs showing themselves here and there.  The road to Whitchurch runs on this side near the river;  there is a quaintly built modern boat-house on this shore, the room over the water being very prettily conceived.  A boat-house is such a pleasant thing for an architect to design, that I wonder at seeing so few that appeal to our better tastes.  The high ground on the Oxfordshire side is here covered for a good distance with fine Scotch firs.

A little way beyond the pretty boat-house a cluster of eyots is reached, termed by its former proprietor (Professor Pepper, of the Polytechnic), "The Fishery". The professor was very anxious, judging by the number of notice-boards, to keep the waters about these eyots very much to himself;  but they can be explored if you wish.  They do not posses very much interest, however, and as we are fast coming to some of the loveliest spots on the whole river, it is best, perhaps, to hasten on and leave "The Fishery" alone. 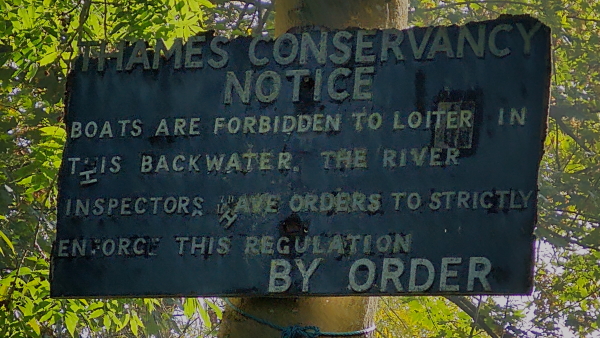 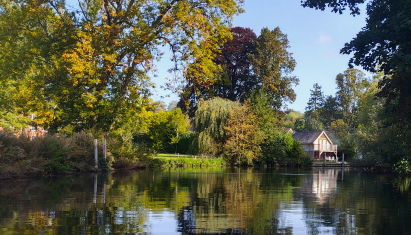 Upstream end of St Mary's island
The substantial piles are a gentle hint that this is not a through route!

The regatta [ website ] takes place in June and attracts top crews from around the UK. Racing takes place on the 1,500-metre downstream course that stretches from St Mary's Island until just short of Reading Rowing Club clubhouse [above Caversham Bridge]. The regatta takes place on Saturday and Sunday in June and its importance stems from its date, being immediately before entries close for Henley Royal Regatta.

... the Warren ... In addition to its other attractions, however, it now puts forward another claim to notice. The 16th of August, 1842, beheld it crowded with all the beauty and fashion of the environs, to witness the result of an experiment made by some public-spirited individuals to form an annual "Reading Regatta." The beautiful sweep of the Thames, extending from the rectory-garden to the scours, reflected from either bank the happy faces of hundreds, who thronged to witness this first contest on their own waters, and beneath as bright a sky as ever smiled on the chalky cliffs of the Warren. It was, without doubt, one of the most gratifying and interesting sights that had ever given a holiday to our neighbourhood; and we sincerely hope that each succeeding "Regatta" may be, if possible, more attractive than the foregoing vires acquirat eundo.

Reading has at length shaken off a lethargy of nearly half a century ...
... three days sport of the first order show something like a desire and determination to atone for past negligence; and we gladly proceed to give a brief outline of the events.
The first day's amusement was the Regatta on Tuesday, the 30th instant. There could not be a better spot for acquatic sports than the beautiful sweep of water from the Scours to the old Rectory House.
On the one side runs the Warren with its rugged chalk cliffs, her covered with heather, there darkened by deep masses of lofty fir trees with grassy meads at its feet gently sloping to the water. On the other bank, a broad and level range of meadows stretches far away to Reading.
Both sides were thronged soon after two o'clock, by hundreds of well-dressed persons, and the numerous punts engaged in ferrying over the fresh arrivals gave the river a very animated appearance even at that early stage of the proceedings.
But when the competitors for the different prizes took their stations, the sight was truly inspiriting; and Old Father Thames himself, as well as those who shadowed his waters, seemed all alive with the excitement.
In the first heat for the Diamond Pin, mounted with gold sculls, Mr. J. Cocks, in Little Ariel, beat Mr. Stevens, in Isle of Beauty. In the second heat, Mr. Bartlett, in La Polka, beat Mr. Ives, in the Sailor. The final heat for the Diamond Sculls, terminated in favour of Cocks.
The contest for the Reading District Challenge Cup and Medals, was between the Reading Britannia Club and the Henley Aquatics, when the Reading crew lost in consequence of an unlucky casualty.
In the double sculling match, between Messrs. Watts and Riggs, and Messrs. Stevens and Ive, of Henley, the latter were winners.
The Gold and Silver Oar was contended for by Messrs. J . Cocks, in the Ariel; G. Prince, in the Water Witch; and W. Pook, in the Water Lily. Won by J. Cork .
Messrs. Clayton and Borris, in the Britannia, beat Messrs. Stevens and Ive, of Henley. The prize was a pair of Silver Sculls, and the race was the best contested of the whole series.
The Caversham Challenge Cup was won easily by the Henley Aquatics, the same men who rowed for the Reading District Cup.
The Ladies' Cup was won by Cocks, in Little Ariel, beating H. Bartlett, in La Polka.
The Reading Challenge Cup was contested by the Britannia, Britarinia, and Ariel. This race, by far the most important of all, remains undecided, in consequence of an accidental collision between the Ariel and Britannia, at an early period of the race.
This day's amusement was truly delightful, and great credit is due to the secretaries, Messrs. Charles Tagg and George Hawkes, jun., for their arrangements.