Junction Kennet & Avon Canal ( River Kennet )
Left bank. The first mile is still administered as if it were the Thames.
The Kennet & Avon

Is it jolly? Hard to tell. Left bank below Blakes Lock. There is a ladder up the wall so you could moor near it.

Administered as a Thames Lock. Manual working but no key required.
Left bank. Canoe Portage up the weir stream.

Mooring just above Blake's lock
Website 0118 956 0432
This family friendly pub, which is on the bank of the Kennet and Avon Canal, offers a range of reasonably priced food, cask ales and craft cidres.
It's popular with walkers and boaters and the outdoor seating area gets very busy when the sun is shining.

Map Website. Through Blakes Lock past weir then turn sharp right. Straight ahead on right bank between weir and bridge. Beware of weir in high flows. Moorings.
Smart Canalside Restaurant and Bar and rooms.

An agreement between the Abbot and Convent of Reading of the one part and the Warden of the Merchant Guild and the commonality of the other part:
Vessels were to have passage to and fro between sunrise and sunset along this several water of the said Abbot and Convent upon condition that when they arrived at Brokenburghlok they should wait while they sent a man to the place within the said abbey called Blankport covent Keychyn and Westhey at one of which places shall be found a person deputed by the Abbot to open the said lock within two hours or less if possible.
Toll: One Penny; Strangers Two Pence.
Crews might make no play riott or noyse to the annoyance of the convent.

Beginning near Reading there is a very bad and inconvenient stanch lock on the Kennet, near the leather mill, called Blake's Lock, this should be removed, and a proper pound lock and gauge weir put in its place.
The water [is of proper depth] from thence to the junction of the Kennet with the Thames, except in one place, where where there is only three feet nine inches of water.
There is another shoal at the junction of the rivers Thames and Kennet, where was only four feet three inches of water; this must also be ballasted out, and the entrance of the river should be rounded away so as to admit the water in time of floods to enter from the Kennet with less rapidity, and consequently prevent it from throwing up a sand bank in this place.

The Kennet, which runs through the town, joins the Thames between Caversham Bridge and Sonning. This river rises near the village of East Kennet, on the eastern side of Wiltshire, in the vicinity of Abury[sic] [Avebury?], and, "after a sequestered course" of about four miles, reaches Marlborough, afterwards waters the ancient village of Ramsbury, thence visits and refreshes Hungerford, proceeding thence to Newbury, where it becomes navigable; aud during a course of nearly forty miles ministers to the wants and industry of man — aiding the operations of the Thames in producing and distributing wealth. Drayton in his quaint poem, the " Poly-Olbion", thus narrates the junction of the streams: —

At Reading once arrived, clear Kennet overtakes
Her lord, the stately Thames; which that great flood again
With many signes of joy doth kindly entertain.
Then Loddon next comes in, contributing her store,
As still we see, the much runs ever to the more.

No one judging from the ignominious junction of the Kennet with the Thames would imagine what a pretty, cheerful stream it is nearer to its source.  In the vale of Newbury, and by Hungerford and Marlborough, it wanders about in most picturesque fashion, at times expanding into quite broad waters, at others spreading out into numerous small rills for the purpose of irrigating the meadows.  It is celebrated for its trout, and was beloved by Kingsley and many another of the angling fraternity.

That everything else of age in Reading has disappeared one need not say, but were the traveller in the middle ages here today, the one thing he would most seek for and most lack would be the bulk of the building at the farther end of town.
One can best say that Reading Abbey was like Durham.  It is true that Durham Cathedral stands upon a noble cliff overhanging a ravine, while Reading Abbey stood upon a small irregular hill which hardly showed above the flat plains of the river meadows, but in massiveness of structure and in type of architecture Reading seems to have resembled Durham more nearly than any other of our great monuments, and to emphasize its parallelism to Durham is perhaps the best way to make the modern reader understand what we have lost. 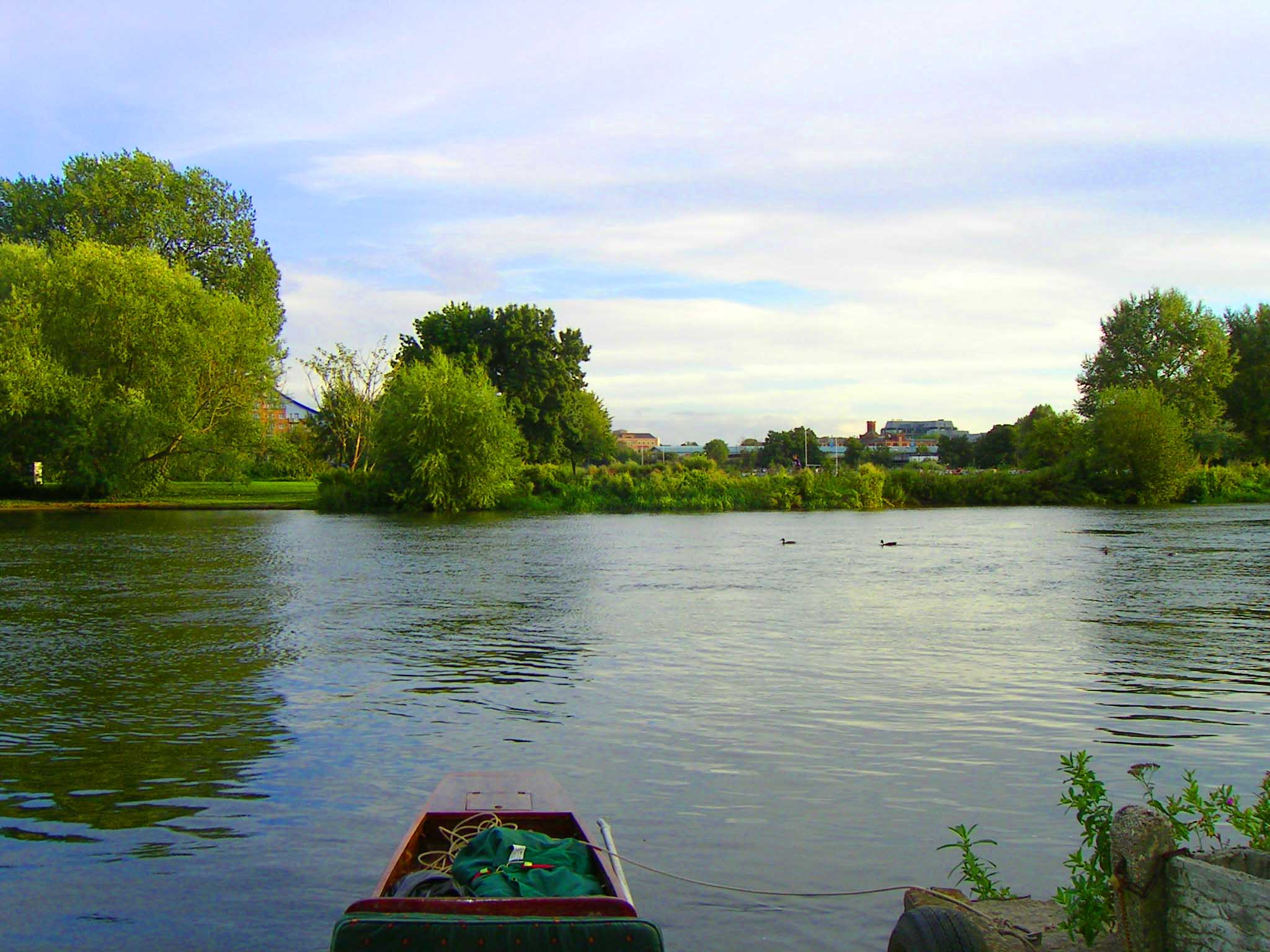 View towards Reading Abbey from below Caversham Lock 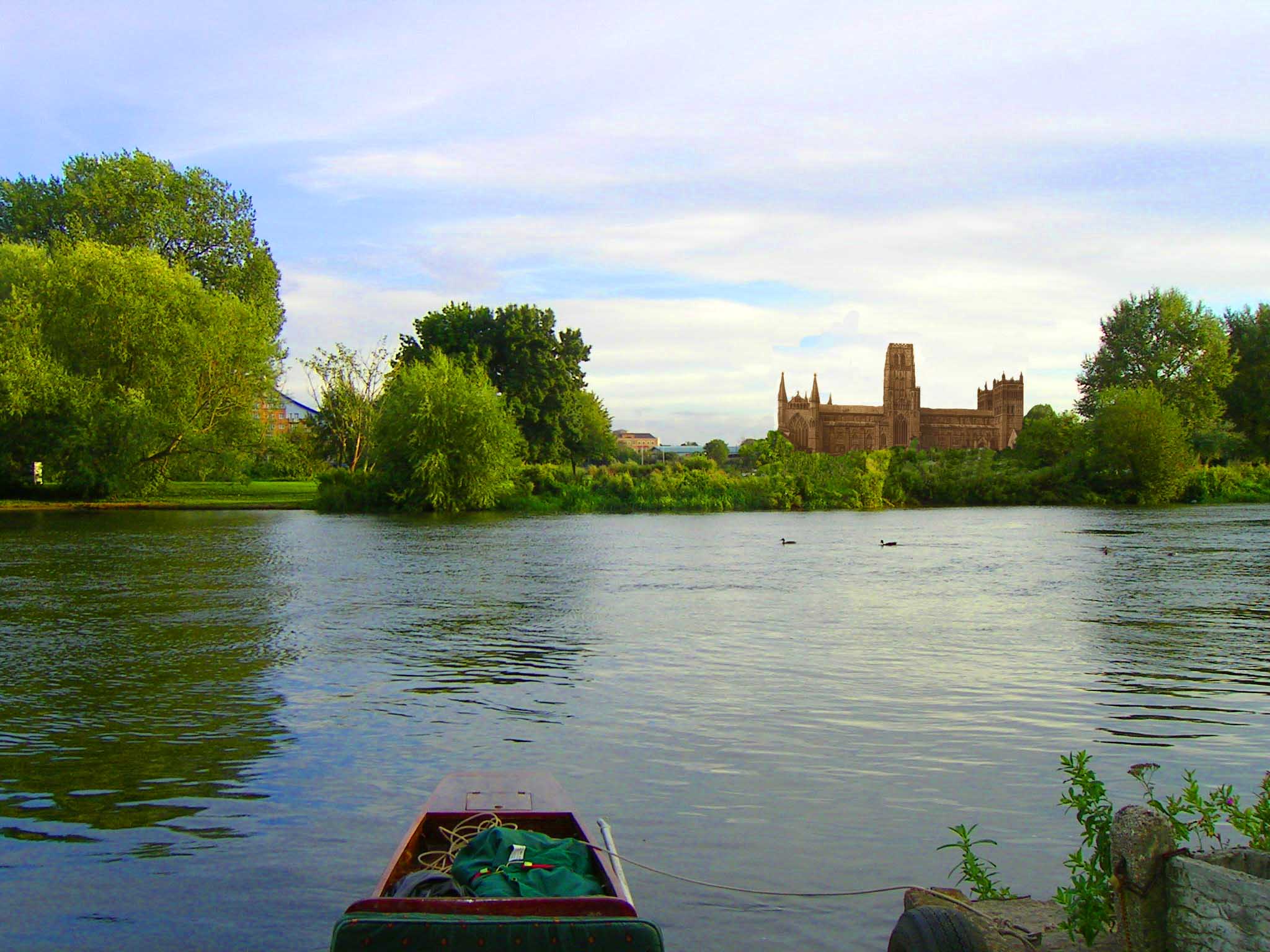 And this is what Reading Abbey was once like, maybe, according to Belloc

[ Of course I have just had to guess the scale! ]
and here it is in an old print: 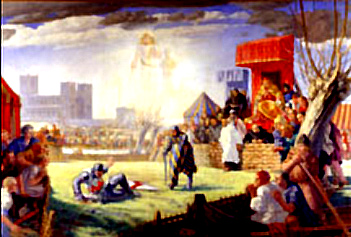 Reading Abbey as it was once. 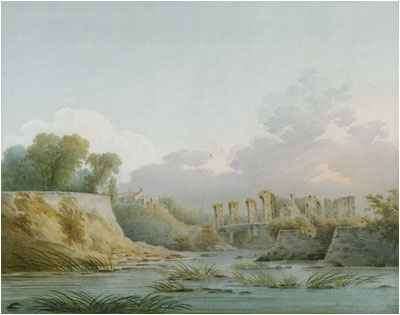 A view of the town of Reading would be hence obtained but for the intervening railway. The steeple of St. Lawrence's Church is, however, seen high above surrounding houses; and so is the red-brick ruin of the Abbey gateway, closely adjoining the modern jail, beside which the ruins of the old abbey have been laid out in shady public walks: they exhibit little remains of distinctive architectural features, inasmuch as the walls have been denuded of the outer squared stone for building purposes, leaving the core of the walls only. A very pretty public garden is in front of this, and a mound, with a fine group of trees, commands a beautiful view of the winding of the Thames, from Purley on the left to Shiplake on the right of the spectator.

Just below Caversham Lock the river twists about, and on the tow-path side are very steep clay cliffs, worn into large concavities by the stream and its eddies, care being necessary in punting lest the disgrace should happen of a lot of crumbling clay getting lodged on the nose of the punt by bumping against the bank.