Temple Island is of course the Royal Henley Regatta start (between the left bank and the island at the downstream end).  During regatta times all river traffic must go to the Right bank side of the island (as you approach going upstream from Hambleden Lock.)
If you think I have my banks confused tell the Environment Agency who have decided to name banks as seen from the sea. Since their Emergency Rendez-vous places use this convention I have decided I must go along with it.

1771: The Temple on the island was designed by James Wyatt for Sambrooke Freeman of Fawley Court
1793:  [Temple Island,] Fawley Court & Henley Bridge, Boydell - 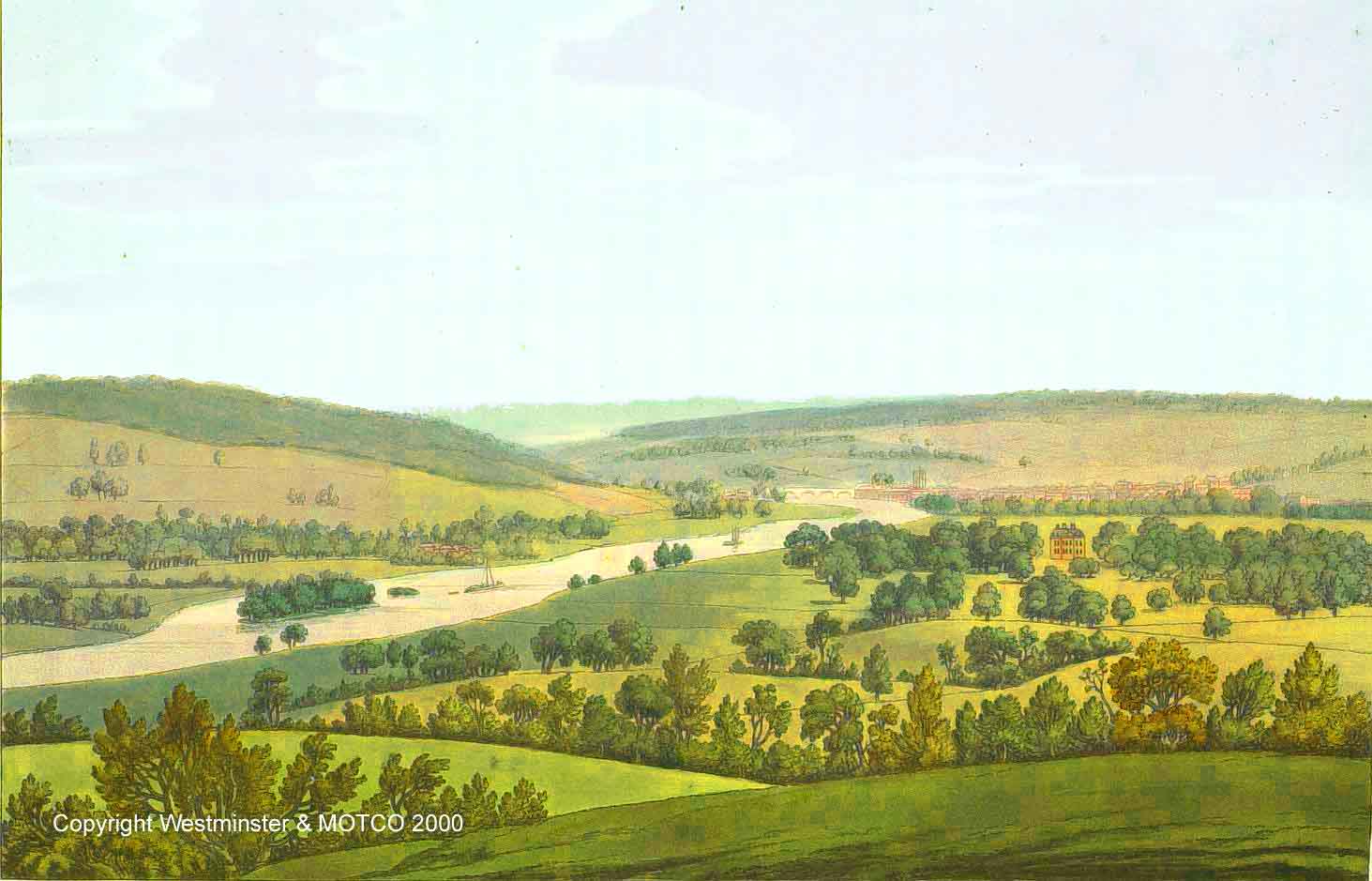 Henley Bridge in the distance was just seven years old in 1793
1793: Temple Island detail from above

Temple Island detail from the Boydell print above

On a little island, in the midst of the Thames, a former proprietor of Fawley Court has erected a Grecian temple, where occasional banquets were given ; he had also surrounded it with hanging trees and choice shrubs, forming altogether a retreat in which poetry might well be content to dwell, and Calypso be delighted to remain.
This little temple is beheld with peculiar effect from Henley bridge, which we are now approaching, the river having more the appearance of a lake than of that it in reality is.

1829: Temple Island was the cause of a clash in the first University boat race. All the boat races are on this site and this first has a page to itself. The race started at Hambleden Lock with Cambridge on the Berkshire station.
Cambridge wanted to take the Bucks side of Temple Island but Oxford wanted the Berks side. The bank was a different shape then and the Bucks route was probably shorter though the Berks side would be more sheltered with less current.
The boats clashed just below the island and the race was re-run from the start. The second time Oxford just succeeded in taking Cambridge's water and the course they wanted - going on to win. 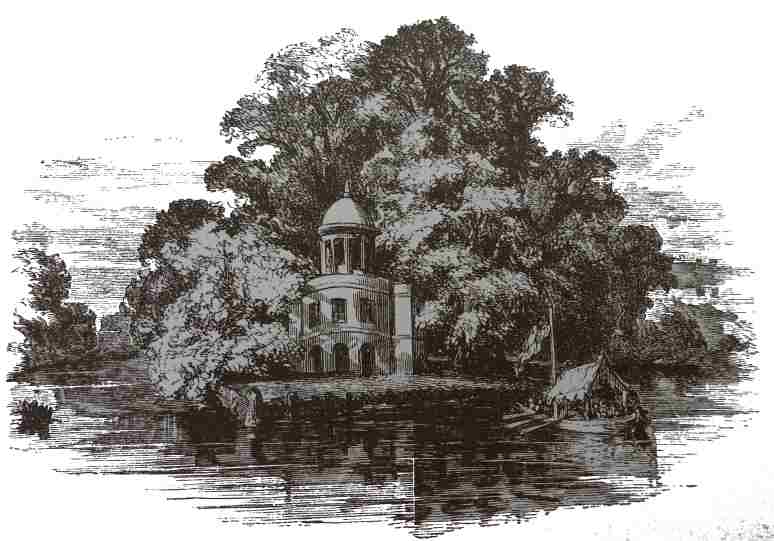 - a summer-house, situated on a pretty island, attracts the eye as one of the graces of the Thames. It is built after a Greek model.
Close to this is the village of Remenham, at the base of some high ground charmingly wooded.
Fawley Court — its Grecian summer-house, that is to say, on the small island— is famous in the history of the Thames as the starting-point of the Regatta, which annually "glorifies" the river, and assembles here a host of gay and happy lovers of water-sports. 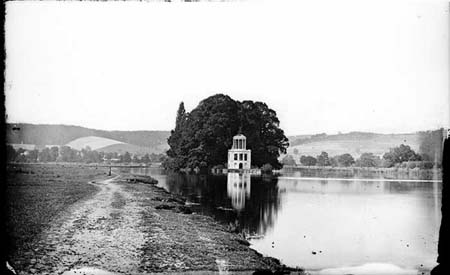 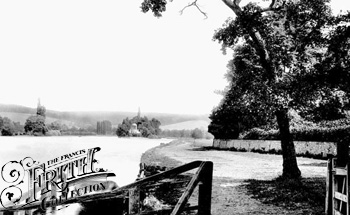 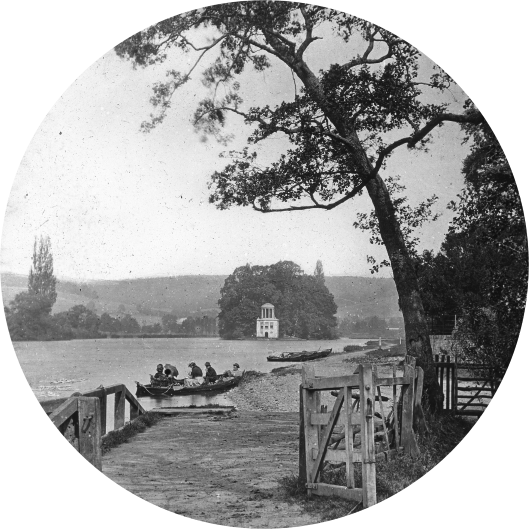 1987: The Stewards of the Henley Royal Regatta purchased a 999 year lease of Temple Island.

The downstream portion of the island is retained as a nature reserve and has been extensively planted with young trees to return it to its traditional, heavily-wooded appearance.
The Temple itself has been fully restored. The wall paintings (those in the principal rooms are the earliest surviving examples of the Etruscan style in Britain) had deteriorated badly and suffered from inferior over-painting. These were repaired and now appear in the original colours as designed by Wyatt.
A statue of a nymph, in keeping with the age and style of the Temple, has been placed under the cupola. 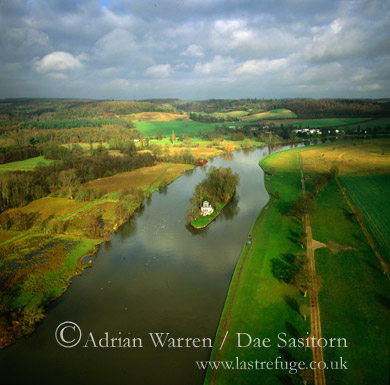 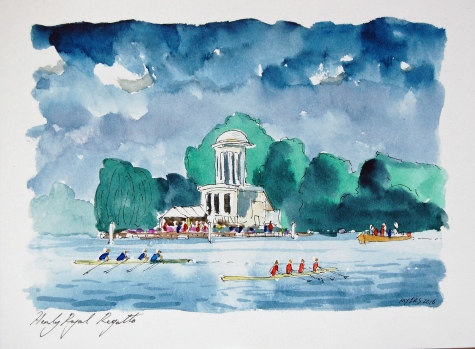 Notice the erosion on the Right bank just above the island, largely caused by the breaking wash of umpires' launches going down to the start during regattas.  I once had a conversation with an umpire when he very patiently explained to me that the launches needed to travel at speed in order that the races should start on time. It did not appear to occur to him that if the launch left five minutes earlier there would be no difficulty in obeying the speed limit (5mph) and keeping wash to what has come to be regarded as reasonable limits. I suppose this might necessitate an extra launch - but what price do we place on the banks of the Thames?
As a punter I am very aware of where the bank used to be, because for some 10 yards from the present bank there is thick mud, and outside that, firm gravel.  Some attempt has been made to reduce the further spread of the damage.

2019: Dawn on the first regatta morning - just above Temple Island - 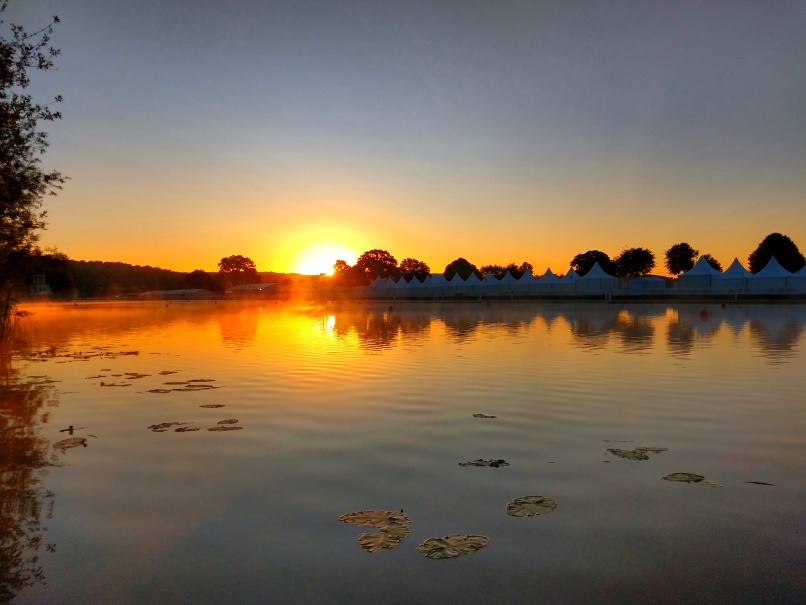 Dawn on the first regatta morning - just above Temple Island