FOR A HOUSE just 38 miles from the centre of London, Culham Court enjoys as glorious and unspoilt a setting as can be imagined. Standing on a gentle slope above the river about two miles (3km) from Henley, it commands a 180- degree panorama of the Thames Valley in which barely a building is to be seen, a view that is as pristine now as when Culham was completed in the early 1770s. Better still, Viscount Hambleden, grandson of the second W.H. Smith, who bought the Culham estate in 1895, gave protective covenants over land on both sides of the river to the National Trust, safeguarding the landscape in perpetuity. Culham Court comes not only with a mile and a half of Thames frontage, with the towpath on the opposite bank, but an estate of 650 acres that has almost regained its 18th-century boundaries, thanks to judicious purchases by the (previous) two owners.

1760: The Culham Estate was bought by Richard Michell -

He had married an heiress with extensive sugar estates in Antigua. He repaired the existing mansion, but after a fire caused by the "carelessness of workmen" he decided to rebuild on the present site.
Recent research by John Martin Robinson in the Smith archives has produced a detailed specification for the house by the architect Stiff Leadbetter, who designed Nuneham Courtenay, near Oxford. As he died in 1766, Dr Robinson thinks the job was taken over by Sir William Chambers, designer of Somerset House, which is set equally splendidly on the Thames in London. Drawings by Chambers for Mr Michell's house dated 1770 were sold at Christie's in 1811 but cannot now be traced. I would like to introduce a third candidate as architect, as there are a series of features in the house that point to Sir Robert Taylor, who designed nearby Harleyford Manor on the Thames outside Marlow.

1770:  Act II Geo. III, c. 45 The Culham Court Estate had privileges reserved.  No new towing paths, landing places or bridges were to be built there; and no boat or float was to be moored within 200 yards of any land or island belonging to the estate.
George III stayed there and presumably it was his friendship which enabled such a draconian act.
Which is all very nice and cosy but no mooring within 200 yards? Pardon me for breathing!
Actually this has rather been put right by gift of protective covenants to the National Trust mentioned above.
George Leslie, "Our River" says -

It belonged in years gone by to the Cornwallis West family, one of whom, the Hon. R. West, here entertained His Majesty King George III for a night and a day.  At breakfast the host, knowing the partiality which His Majesty had for a particular breakfast roll, made only by Gunters in Berkeley Square, had these fetched from that shop and brought down by relays of horsemen all the way from town in time for the Royal breakfast, the rolls being kept hot by being wrapt up in flannel.  His Majesty only remarked on tasting them,
"Ah! Gunter, Gunter.  I am glad you deal with Gunter, West; nobody like Gunter."
When he entered the house His Majesty wiped his shoes most carefully, and on Mr. West's begging him not to take the trouble, he replied, "No, no, West, I am not going to carry dirt into any man's house. 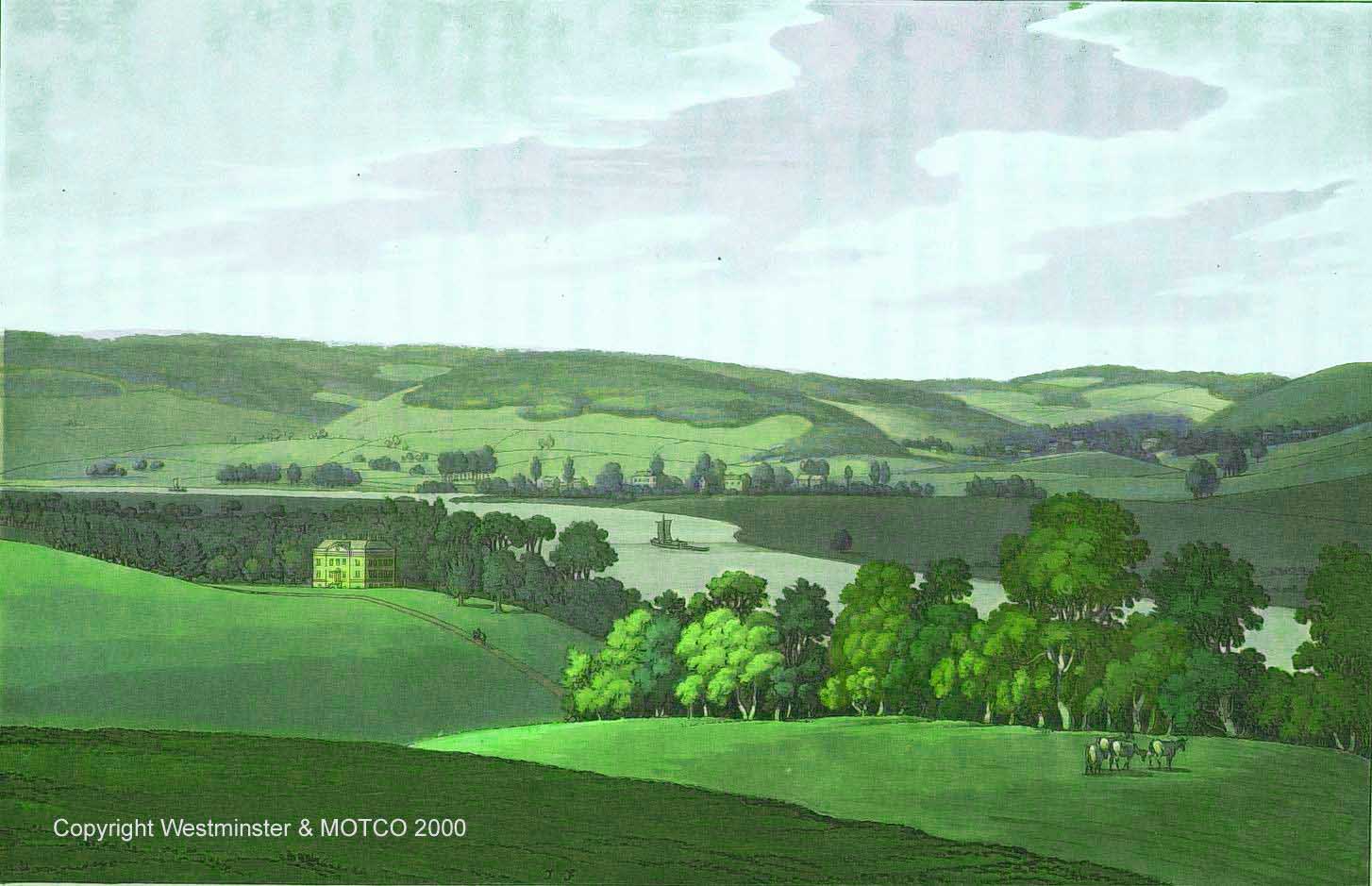 1811: Mrs Lybbe Powys described another visit by George III, his Queen, princesses, 32 horses and numbers of servants, noting the King always goes into every room. When he startled a maid doing the flowers the monarch put on a naughty-boy expression saying: "Don't be frightened - I won't steal any one thing". 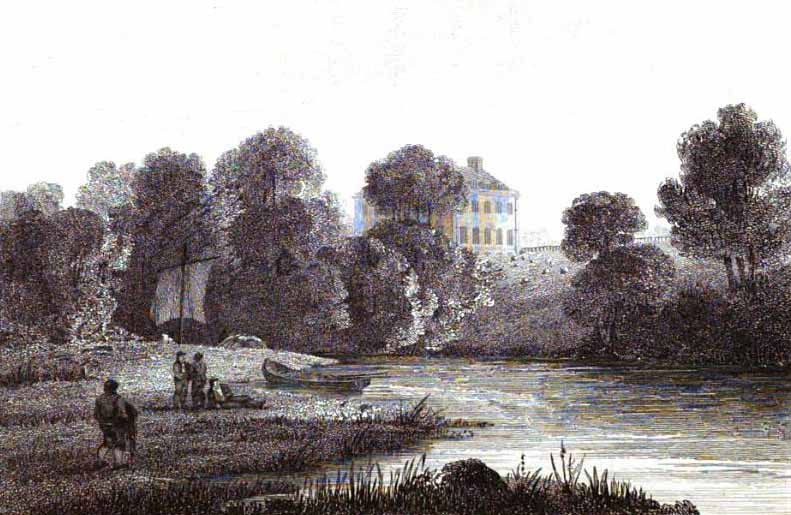 The Thames is no where more abundant in beauty, than between Henley and Marlow: while the river itself, as if sensible of the superior charms of its banks, lingers, as it were, in its course, by a greater variety and succession of meanders, than it any where displays, from its fountain to the sea.
Culham Court is among the ornamental objects which distinguish the Berkshire side of the stream.
The manor of Culham belonged, in the reign of Queen Elizabeth [I], to the family of the Nevilles: it was, in the beginning of the last century, the property of Serjeant Stevens, and latterly of Robert Mitchell, Esq. who erected the house, which, with the home scenery, forms the subject of the engraving.
On his death it descended to one of his two daughters, the co-heiresses of his property, who married the Honourable Mr. West, a brother of the Earl of De Lawarr.
From Henley, to this part of the river, the Berkshire side sinks in a comparison with the woody theatres of the opposite country: at Culham Court it recovers its former character, and at this place, Berkshire, which is full of landscape beauty, may boast of one of its most delightful prospects.
It is not of great extent, but embraces a variety of charming objects, and distinctly commands every thing it comprehends.
The mansion-house is an handsome modern building, and stands half way down an expansive irregular brow, with large, wide-spreading trees scattered over it, which gradually declines, in swelling and unequal slopes, towards the river beneath it.
To the right the view occupies the meads, through which the stream serpentines in superior beauty, with their rich and various boundaries.
Before it, and on the Buckinghamshire side of the water, is Medmenham, with its church, abbey-house, and upland farms.
To the left the eye advances up the enchanting vale of Hambledon, and finds more distant termination in the groves of Fawley.
From the high grounds above the house, there is a still more commanding view of the windings of the river, with Danesfield, the seat of Mr. Scott, on its shaggy cliff, and the less perceptible mansion of Hurley place, on the Berkshire bank.
On the same line of elevation, and in the same range of improvement as Culham Court, but receding rather more from the river, is Rose Hill, a very pleasant but singular villa, which belongs to the proprietor of Culham, and, in its original state, appeared to be an ornamental building in the grounds of the former. It was fancifully built in the precise form and arrangement of a Chinese habitation. It had its bells, its dragons, and spiral turrets, with all the gawdy colourings of that species of oriental architecture. These decorations it no longer possesses : it retains, however, its primæval distribution of apartment, and its single floor. It is placed in the recess of a wood, which forms two side screens that narrow the river from it, but it nevertheless commands several parts of that scenery which has been the subject of our description.

Culham Court, the seat of the Hon. Frederick West, pleasantly situated on the banks of the Thames.
The manor of Culham, in the reign of Queen Elizabeth, belonged to the family of Neville. It was some time ago the property of Serjeant Stevens, and afterwards of Robert Michell, Esq. one of whose daughters Mr. West married. Within the plantations at Culham, is Rose Hill, a house built in the Chinese style, by Governor Hart, and now the property of Mr. West.
In the year 1825, the following miraculous escape occurred at the farm house, at Culham Court. As Thomas, Appleby, aged 14 years, was drawing water from the well, about nine o'clock in the evening, he fell in, and was precipitated to the bottom, a depth of 48 yards ; immediate assistance was rendered, and the chain of the well was let down, which the boy caught hold of; when in the act of being drawn up, it unfortunately severed near the middle, and he was a second time precipitated to the bottom. Several ropes were then procured, and tied together, with a stick across the bottom, and a lighted candle in a lanthorn, about two yards from the end. The boy got across the stick, and was safely drawn up, and released from his perilous situation. Though slightly bruised, he received no material injury. 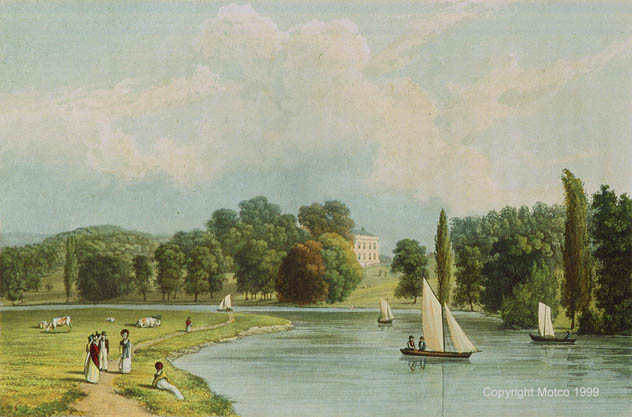 Culham Court is a queer old, red-brick, Queen Anne house, uncomfortably perched up on a chalk hill ...  I find I get to like this house better the oftener I see it, and indeed now almost admire it.
When I first saw Culham there was hardly any garden at all on the river front, as the park-like grounds ran right up to the house itself, which made it look more quaint and uncomfortable than even now.   Rather elaborate attempts have been made lately to pull up something round about its front, to hide, as it were, its nakedness, but it is not the place for a garden, and nothing can ever look comfortable on so steep a hill.

Early in the 20th century Culham was home to Sir Henry and Lady Barber, the collectors who founded the Barber Institute of Fine Art in Birmingham. The picture of Hambleden Lock by Nestor Cambier was painted whilst Cambier was staying at Culham Court during the First War.
They were followed as owners by the newspaper magnate Cecil King.
For nearly half a century, from 1949 to 1996, Culham belonged to Felicity Behrens, wife of the banker Michael Behrens. They entertained writers and artists, including Edward Ardizzone, who did many sketches while staying here. They also employed Raymond Erith, the great postwar champion of traditional architectural values, to design garden terraces overlooking the river as well as a delightful flint-faced swimming pool pavilion with an exotic Pompeian-red mosaic interior.
Since then Culham Court has changed hands twice, most recently for £35,000,000 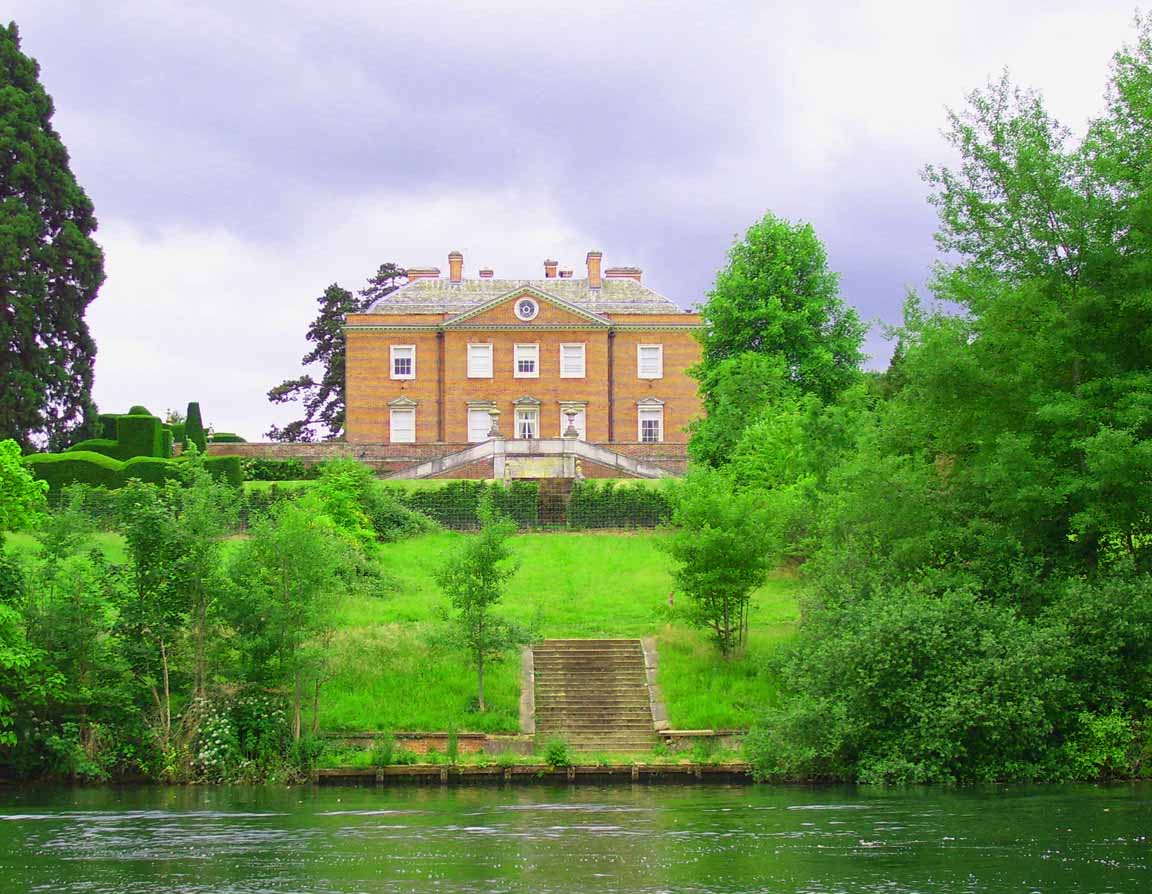 One of the deep holes in the river near Culham, is named "Gleddie's" or "Glady's Hole".  The legend as told me by the fishermen, being that here a very bad man of the name of Gleddie was drowned, and that as he sank, the bubbles that rose from him exploded in loud curses as they reached the surface.