Slipway,Right bank, at end of Ferry Lane off A4155 (public)
The left bank slipway has been lost
1574:  Halles Stake  in Boldes Meade and Bulbankes Ditche
Fred Thacker says An ancient Ferry

1873: Advertisement for The Medmenham Ferry Hotel - 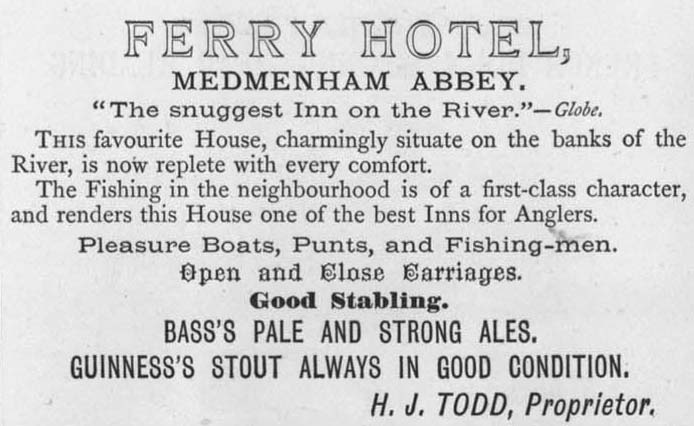 1890: I think this building no longer exists - it can be seen in this Taunt photograph of the Ferry Hotel and Medmenham Ferry - 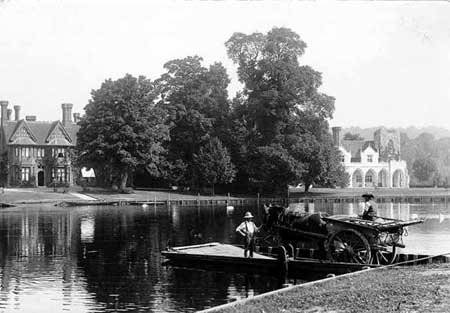 This no longer existent hotel had a PUNCH poem to go with it: -
A Lay of Medmenham, by a broken-hearted boating man landing from the Thames, who was informed that, by the rules of the Hotel, visitors were not allowed jam with their tea if served in the garden.

"JAM" NON "SATIS"
There's a river hotel that is known very well,
From the turmoil of London withdrawn,
Between Henley and Staines, where this strange rule obtains -
That you must not have jam on the lawn.

In the coffee-room still you may eat what you will,
Such as chicken, beef, mutton, or brawn,
Jam and marmalade too, but whatever you do,
Don't attempt to eat jam on the lawn.

Young Jones and his bride sought the cool river side,
And she said, as she skipped like a fawn,
"As it is, it is nice, but 'twould be paradise,
Could we only have jam on the lawn!" 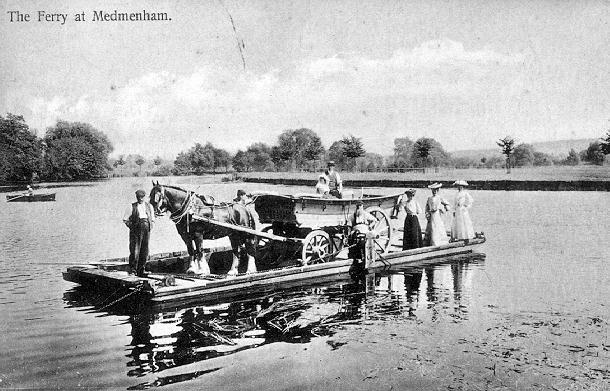 1899: The High Court decided Medmenham Ferry was public. An edifice and plaque were put up to commemorate this. The money might have been better spent on ensuring the continuance of the ferry which shortly ceased - 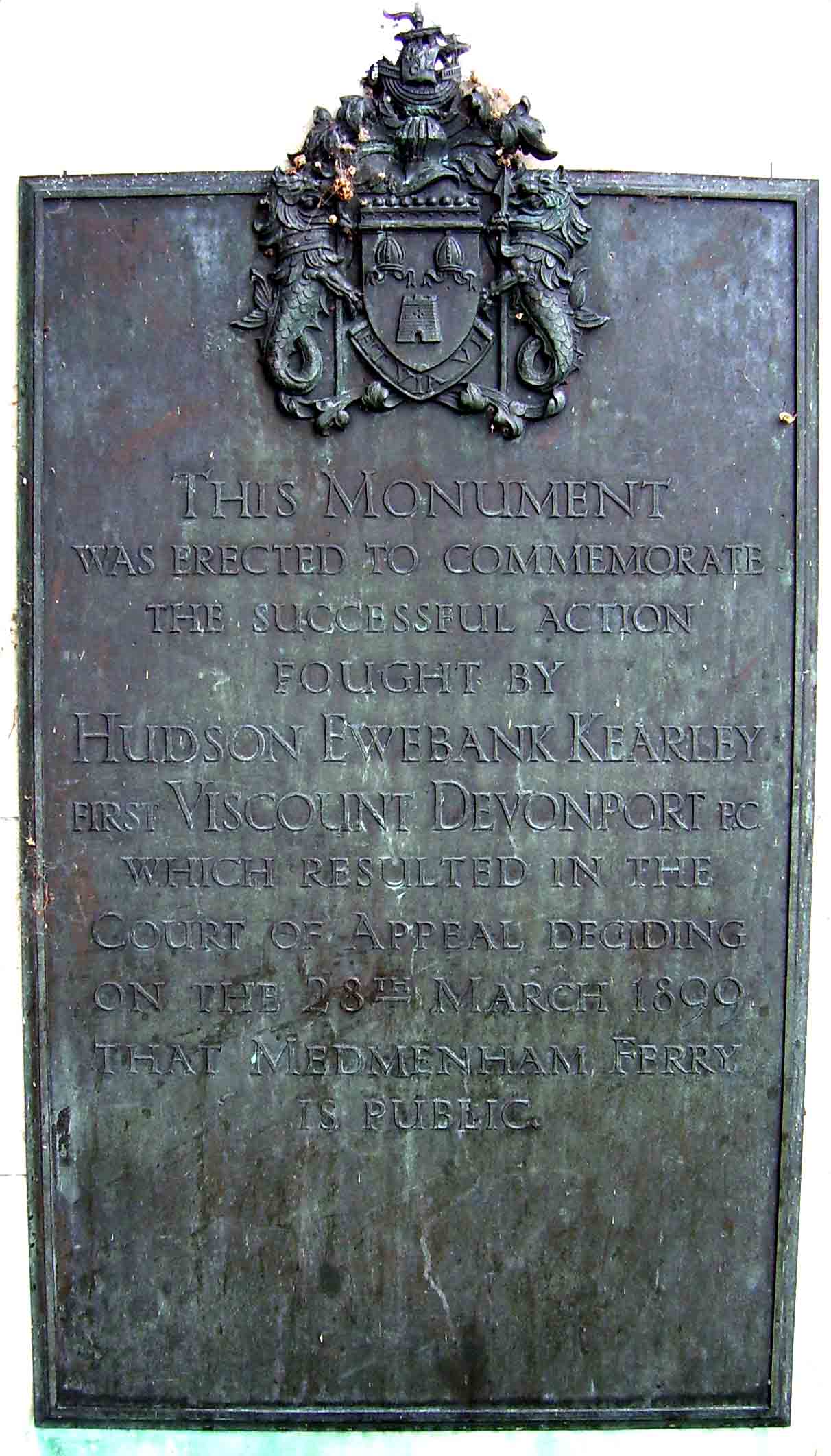 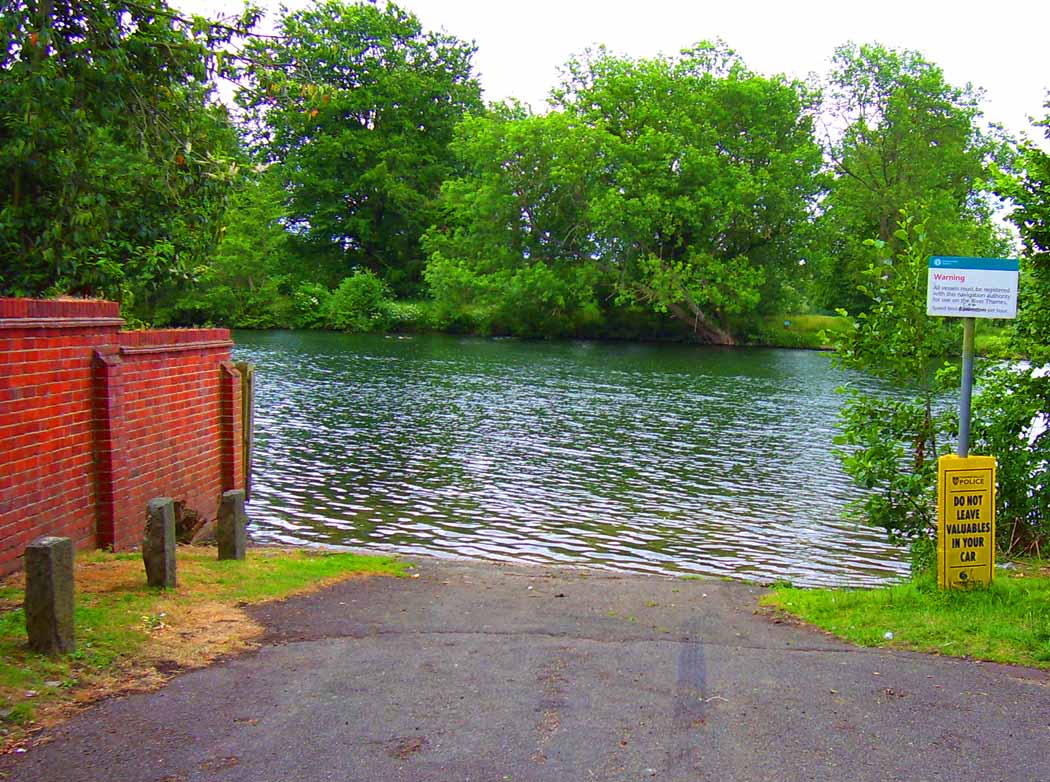 I don't think there is much under water. Turning with a trailer very restricted - and very little parking

1886: The Tiny Trip, Medmenham, by Joseph Ashby-Sterry
Listen to 'THE BILL OF LADING'

THE BILL OF LADING

[ Those who follow Joseph's contributions to this site may begin to see a theme developing here. I think if I were Mama I might have been a little worried. Joseph Ashby-Sterry looked like one of the villains from a Victorian melodrama, of the "Ah-ha mi' proud beauty" school ] -

A NEW SONG TO AN OLD AIR
I waited last Monday at Medmenham Ferry, well
Anxious for some one to ferry me o''er:
The man was at dinner, and I could tell very well
He would not return for an hour or more.
So I sat me down and smoked so steadily.
What should I do?
I could not tell readily.
A maiden rowed by who had soft sunny hair,
Whose dimples and eyes were beyond all compare
This water-girl was so uncommonly fair !

But only to think, as I pondered there wearily,
And gazed at the Abbey, and thought it a bore,
She leant on her sculls, and she offered most cheerily
To row me across to the opposite shore !
I said How kind !  She pouted capriciously !
I stepped aboard, and she smiled deliciously !
And rowed off at once with so charming an air,
And feathered her sculls with such neatness and care
This water-girl was so delightfully fair !

For once I'm in luck - there is not the least doubt of it !
Alas that the voyage is concluded so soon !
The skiff's by the shore, and I slowly get out of it,
And wish the fair damsel a good afternoon.
I raise my hat, and she looks so thrillingly !
I thank her much, and depart unwillingly !
She smiles, and she ripples her soft sunny hair;
And leaves a heart broken beyond all repair !
This Water-Girl was so surpassingly fair !