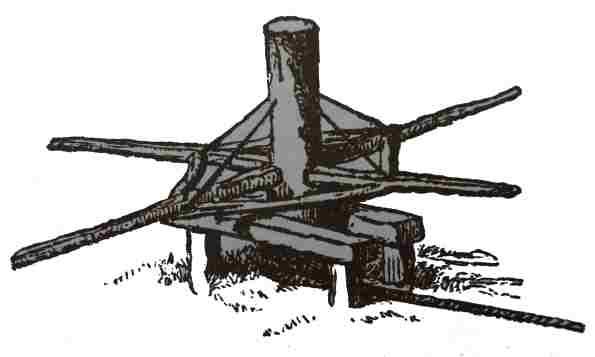 thirty or forty years. In old times it was no uncommon case to be compelled to drag the barge through one of them, for which purpose a winch was used. These winches are still found occasionally on the banks of the river, and we thought it worth while to picture one of them. It is of rude construction, with four hands, the rope rolling round the centre as the boat progressed. We believe they are now entirely disused, and are only found in the immediate vicinage of deserted locks. They certainly add to the picturesque of the scenery, especially as they are usually found in quiet and retired nooks on the river's banks.

Right bank a few yards above the weir (CAREFUL!) - access by boat only
1898:  A dispute between the Conservancy and the landowner of the Right bank just above the weir.  There was an old winch used for winching barges up the flash lock which was next to it.  It was said to be the last surviving on the river.  The Conservancy claimed the winch and the land on which it stood and the two plots of land forming the old flash lock.  The Conservancy had to admit defeat and requested that the antique relic should be preserved.  Fred Thacker wrote -

The relic is covered with a climbing rose, under whose disguise the old hardswearing and much enduring bargemen would be puzzled to recognise it. 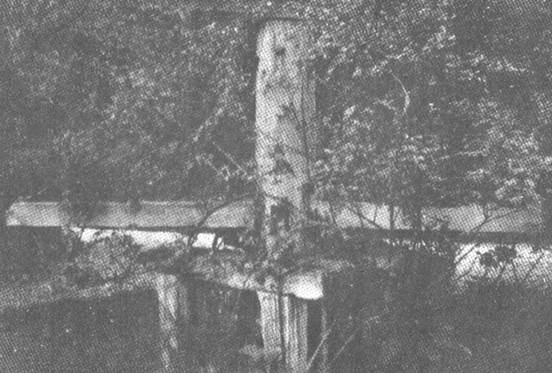 The Wittington Estate includes the riverside strip below the cliffs - bought by Kearley to annoy his next-door neighbour, Robert Hudson of Sunlight Soap fame, who had acquired the Danesfield estate in the 1890s. This effectively denied Hudson access to the river - a situation that still exists today. Kearley and Hudson had both previously lived in Medmenham, a mile to the west of Wittington, and this is where their rivalry started. Hudson was responsible for building the current Danesfield House, which is the second time the house has been rebuilt.
The Thames at SAS UK also features a flash-lock capstan, said to be the only one left in the whole of England. Restored in 1999, it was originally used to pull river barges up the flash-lock prior (and for some time after) the pound lock was built in 1780. Kearley restored and repaired it from time to time from estate oak. SAS UK now maintains this historic site.

[ But of course it's not a drum winch with a big handle that the name winch had led me to imagine. In naval terms, the difference between a capstan or windlass and a winch is that a capstan or windlass has a vertical axis of rotation, while a winch has a horizontal axis of rotation.
I see that the sign board near it describes it as a "capstan wheel" - but that is a modern interpretion. The old texts all call it a winch.
However this "winch" has a rotating vertical shaft (presumably well sunk down into the ground) with six horizontal beams.  The line might either have been wound up on the vertical shaft as it was rotated by pushing round the beam, or maybe there were just several turns on the shaft and the line then led off to be laid out ready for use?  Either way the thought of pulling a heavily laden barge up that weir by this method makes me devoutly thankful for pound locks with keepers and hydraulics.
See WHITCHURCH LOCK for the use of such a winch. ]