The Olde Bell is part of a family of modern coaching inns, set in historic timber framed buildings providing eating, drinking, gatherings and lodgings ... with 50 bedrooms, a celebrated restaurant and 7 private rooms seating up to 150 people for weddings, parties and meetings.
The Olde Bell is not a hotel where the rooms dominate, but where the common spaces are the heartbeat of the place. The buildings function almost like a village in itself; the main building for the overnight guests and locals, and the auxiliary buildings for private gatherings.
The kitchen is under the charge of Warren Geraghty who uses locally grown, seasonal produce served with a generosity of spirit in both flavour and portions.
With parts of the inn dating back to 1135 and with nooks, crannies and crooked doors The Olde Bell offers traditional hospitality in an environment which is human, warm and social.
The Olde Bell is classified as a 5 star Inn by the AA Hotel Guide, has been awarded 2 Rosettes from the AA Restaurant Guide and is part of Great Hotels of the World Premier Collection.

1826: Hurley in the Henley Guide. Full text and prints

... near the banks of the Thames, stand the pleasant village of Hurley, and the large and handsome mansion, called Lady Place. The beauty of the situation and the loveliness of its prospects, are the theme of universal admiration. ...
The valley, in which this mansion forms a prominent object, is adorned with numerous seats, and some of the most majestic windings of this "King of Rivers".
Opposite to Hurley, Harleyford, the mansion of Sir William Clayton, backed by woods, and half hidden by majestic elms, appears in singular beauty, and forms a fine fore-ground to the justly celebrated vale of Marlow ; a district which yields to none, in the beauty of its woods, the splendor of its seats, or the fine undulations of its hills.
Geoffrey de Mandeville, who, in reward for his gallant, behaviour at the battle of Hastings, received the manor of Hurley from the Conqueror, founded this monastery for Monks of the Benedictine Order, and annexed it as a cell to Westminster Abbey. In 1553, the revenues were valued at £121. 8s. 5d. per annum. At the dissolution of the religious houses, the site, (called Lady Place, from the Virgin Mary to whom the monastery was dedicated,) was granted to Leonard Chamberlayne, and shortly afterwards came into the possession of Richard Lovelace. The present mansion was built by his grandson, Sir Richard Lovelace, who went on an expedition with Sir Francis Drake. His son in 1626, was created Baron Lovelace of Hurley.
During the reigns of Charles the Second and James the Second, a vault beneath this house was the scene of frequent meetings of some of the principal nobility, who assembled to ascertain the measures necessary to be pursued for re-establishing those liberties, which the insidious hypocrisy of the one, and the more open despotism of the other, had completely overwhelmed and destroyed. By an inscription in the dark recess at the end of this vault, it appears that the principal papers productive of the revolution of 1688, were signed here. On this account the Prince of Orange when he had obtained the crown, visited the vault, and it was visited by General Paoli in 1780, and by his late Majesty in 1785.
John Lord Lovelace, Captain of the Band of Gentlemen Pensioners to William the Third, fitted the mansion up with the greatest magnificence ; but by his prodigality and splendour, so reduced his fortune, that he was obliged to sell this estate. After passing through a number of proprietors, it came to G. A. Kempenfelt, Esq. brother of the unfortunate Admiral Kempenfelt, of the Royal George, who lost his life at Portsmouth, by the sinking of that vessel, June 28, 1782. The last proprietor, Mr. Troughton, is lately deceased. The manor belongs to Viscount Ashbrook.
The mansion has not been inhabited for many years, and is now in a bad state of repair. The front presents a very handsome elevation. It consists of a centre and two projecting wings. The entrance is through a porch, ornamented with columns and pilasters, having on each side a very fine bay window of two stories[sic], which light the hall and saloon. The hall and stair-case are very magnificent. On the principal story is a very large and handsome saloon, the pannels of which are decorated with landscapes, about 50 in number, said to have been painted by Salvator Rosa. They are not superior to the numberless landscapes to be seen in houses fitted up about the same time ; and from the soffits of the windows, which are of stucco, being evidently painted by the same hand, the supposition that they were sent to Italy, is incorrect.
In the cellars beneath the house, three bodies in Benedictine habits have been found. To the west of the mansion, numerous traces of the monastic buildings are to be seen. These form a small quadrangle. The stables exhibit the remains of the refectory. The windows were built in the time of the Conqueror, and though only of chalk, are as fresh as if the workmanship was modern.
The parish church was originally the chapel of the monastery. The south and east sides are more modern, but the west and north walls are part of the original building, which was consecrated in 1086, by Osmond the Good, Bishop of Sarum. The west door-way and window, are round headed, and ornamented with Saxon columns and zigzag mouldings. In the church is a brass plate to the memory of John Doyley, Esq. and some monuments of the Lovelace family. 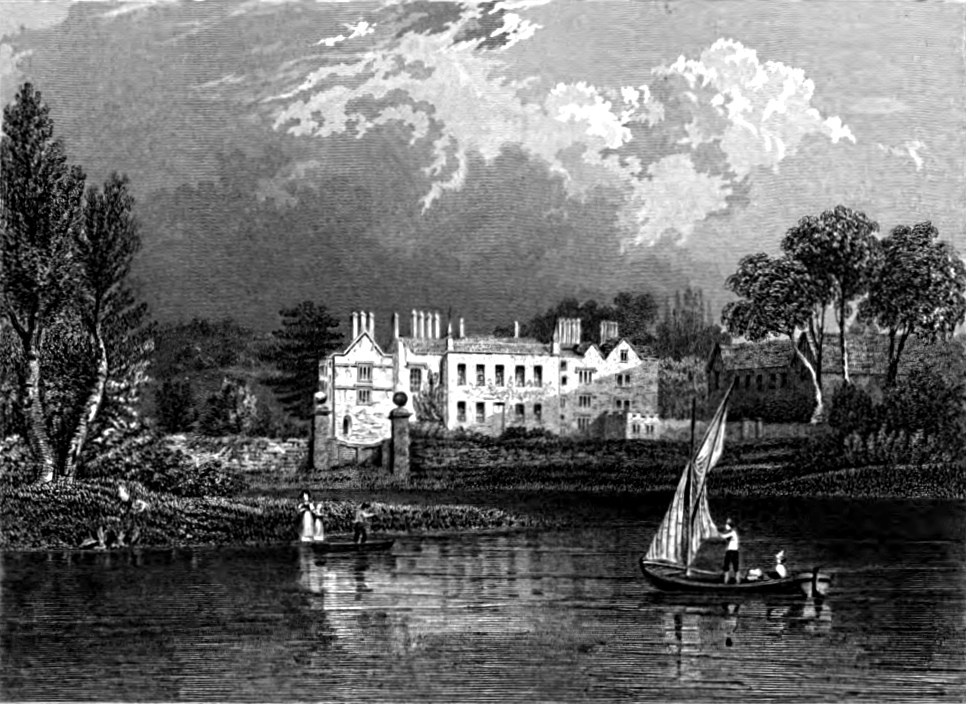 The pretty and picturesque village of Hurley is now reached; it is in Berkshire;
another village, that of Harleyford, occupying the opposite bank
Adjoining Hurley was Lady Place, formerly a priory for Benedictine monks, more recently a stately mansion, but now indicated only by aged garden walls. The house was erected during the reign of Elizabeth, on the site of the ancient convent, and out of the debris of the buildings, by the then owner of the estate. Sir Richard Lovelace, — one of the brothers in arms of Sir Francis Drake.
"He was a gentleman of metal", writes old Fuller, "who had the success to light on a large amount of the King of Spain's cloth of silver, — I mean, his West Indian fleet, — wherewith he and his posterity are warmer to this day." He was created Baron Lovelace, of Hurley, by Charles I.; but during the reign of his two successors, the house was the meeting-place of the several peers and leading commoners whose movements led, eventually, to the "calling in" of the Prince of Orange. The meetings were held under cover of splendid hospitalities, by which the noble owner of the mansion is said to have exhausted his fortune. *
* When the prince became converted ito the monarch, as our King- William III., he did not forget the service that Lord Lovelace had rendered him; he made him captain of the Band of Gentlemen Pensioners, and gave him other emoluments; but the taste for open-house keeping and display, engendered by his revolutionary meetings, never left him. He made great alterations at Lady Place, redecorated the interior, and lived in an extravagant style; so that his possessions were sold, under a decree of Chancery, at his death, to pay the debts in which he became again involved.
The more secret and perilous consultations were, it is said, held in a vault underneath, originally the burial place of the monastery. The house is described by Boydell, in 1794, as
"a spacious edifice. The hall, which occupies a disproportionate part of it, is a noble room, with a light gallery round it. The saloon is wainscoted with English oak, which was sent over in panels to Italy to be painted, according to the family tradition, by Salvator Rosa. The views are undoubtedly Italian, and in the bold style of that great master." *
* They were, more probably, the work of Antonio Tempesta, who designed in the same style, and was much employed in such decorations as these. The paintings had but little merit, and brought very small prices when the house was destroyed.
The structure, having become much dilapidated, was altogether removed in the year 1837. Fortunately, Mr. Fairholt visited "the Place" about that period, and made sketches of the various objects of interest, — among others of the famous vault; and to his pen and pencil we are indebted for the following details.
Lady Place obtained its name from the monastery upon whose foundation it stood having been dedicated to "our Lady" the Virgin. The exterior had projecting wings and a porch, in accordance with the prevalent taste of the reign of Elizabeth, said to have been thus generally adopted in compliment to that sovereign, the ground-plan forming the initial of her name, thus — E [ rotate 90° ]
The inner arrangements were singularly inconvenient, except in the lower story[sic], where they were much enriched with stucco ornament and painted landscapes; but the upper rooms were small, and the gutters of the roof ran through them, freely admitting both water and air. 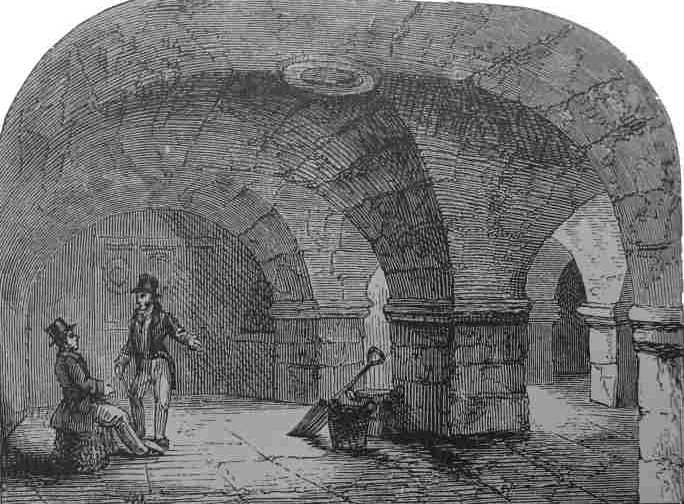 THE VAULT AT LADY PLACE

The vault below was reached by a trapdoor in the hall-floor, and was very solidly constructed, receiving its light from a grated window below the level of the garden. In one recess (that behind the figures in our cut) a square tablet was inserted. containing three inscriptions in as many compartments, giving the chief facts connected with its history: first detailing its original foundation, "at the time of the great Norman revolution, by which revolution the whole state of England was changed"; then, "that in this place, six hundred years afterwards, the revolution of 1688 was begun, and it is said that several consultations for calling in the Prince of Orange were held in this recess, on which account this vault was visited by that powerful prince after he had ascended the throne." The third inscription commemorated another royal visit in these words: —
"Be it remembered that this place was visited by their majesties King George III. and Queen Charlotte, on Monday, the 14th of November, 1785."
The visit of General Paoli, the celebrated commander of the Corsicans in the revolution of that island, was also noted in May, 1790; as well as the fact that, in digging below the floor, some bodies in Benedictine habits had been found, the last denizens of the old monastery. As we have said, there are now no remains of Lady Place, except the garden walls, to indicate its "whereabouts."