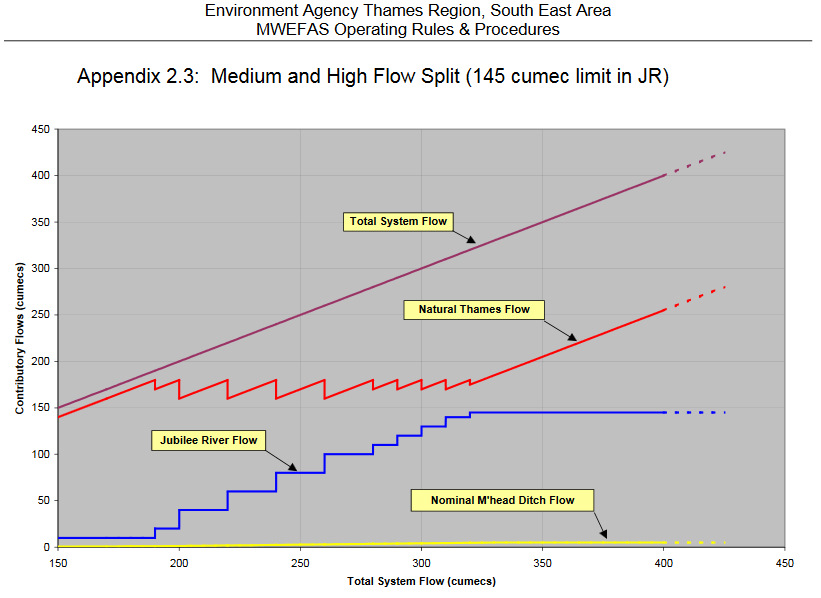 [going upstream above Boulters Lock] the entrance to the upper Jubilee River comes into view almost immediately on the right and is easily identified by a barrier system to only allow canoes and small craft to pass through. The half mile or so tranquil tree lined backwater leads to Taplow Mills where there is no egress and necessitates returning to the Thames.

Description of the Jubilee River from MWEFAS Operating Procedures (v4)-

The Maidenhead, Windsor and Eton Flood Alleviation Scheme (MWEFAS) was designed to protect the scheme area from flooding up to a flow return period of 1 in 65 years, which equates to a total flow of 515m³/sec (cumecs). The scheme comprises two principal elements:-
i) Jubilee River  a flood relief channel, leaving the River Thames upstream of Boulters Weir and rejoining downstream of Black Potts Viaduct at Datchet. The Jubilee River consists of a 11.6 km long flood relief channel. Levels in the channel are controlled by five weirs, two of which are variable crest, the remaining three being fixed crest weirs. Parts of the Jubilee River have embankments adjacent to the channel in order to provide the necessary flow capacity.
The current capacity of the Jubilee River, maintaining 300mm freeboard, is 145 m3/sec [ NOW UPDATED TO 170 m3/sec - see below ]. The remaining flows are taken down the River Thames and the Maidenhead Ditch.
ii) Cookham and North Maidenhead Defences  A series of flood walls and embankments protecting these areas from overland flood flows. The Cookham floodwalls incorporate moveable flood gates with a drainage system that allows seepage to be pumped from sumps.