The first stage of an £8m project to renovate a town's water channels has been officially completed. Volunteers and contractors have spent five years enlarging and landscaping the waterways in Maidenhead, Berkshire. The first section of channel has been opened to small boats, after a new weir raised water levels. Maidenhead MP and former Prime Minister Theresa May, officially opened the renovated waterway, said it would "revitalise" the town centre. She said: "It will make a huge difference by changing the ambiance of the town... which has been needed for many years."
The Maidenhead Waterways charity said it initiated the project 14 years ago. Chairman Richard Davenport said: "Before, Maidenhead town centre was a rather soulless, characterless 60s concrete town centre. "By creating a sense of place in the town centre... that can only be good for people and trade."
Developers, who have helped to fund the project, have started to build new homes around the waterways, known as York Stream and Moor Cut. The scheme is also supported by the Royal Borough of Windsor and Maidenhead. The charity aims to carry out further work to complete a ring of waterways in Maidenhead and clear a navigable passageway to the River Thames at Bray.
Richard Davenport, Maidenhead Waterways chairman of trustees, said: “Tens of thousands of skilled volunteer hours have kept the waterway ‘dream' alive. While there remains much to do to fully realise its potential, completion of the Green Lane weir, fish, eel pass and boat rollers has now lifted and stabilised water levels along York Stream in the town centre, linking and embracing the major developments attracted by the new waterside setting.” 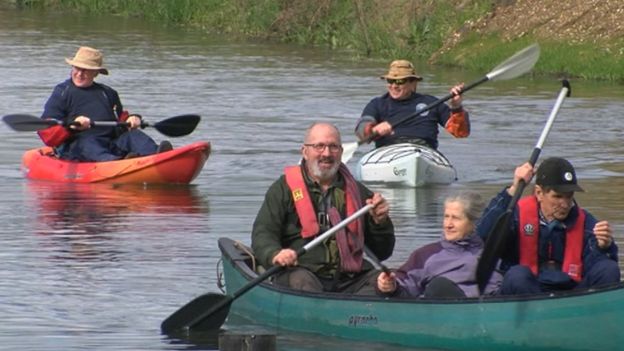 Left bank between Thames Marina and Summerleaze Footbridge.
"York Cut" may be a misnomer - it is the Cut which is the outflow from the York Stream.
It was unnavigable for most boats. Certainly manual boats only for the moment.

1770: Benjamin Davis surveyed a line from Basingstoke to Monkey Island. The Basingstoke Canal was to be a 29 mile barge canal that was estimated to cost £51,000. He chose Monkey Island as the point to join the Thames as it was where the proposed Reading to Isleworth canal was to cross the Thames. However the canal eventually linked to the River Wey.
1770-1: Survey for the intended Navigable Canal from Reading to Monkey Island.
Scheme surveyed by Brindley to bypass the 'unsatisfactory navigation' by a canal from the River Kennet at Reading through Sonning and Twyford to near Bray.
This cut is also the downstream end of the waterways through Maidenhead now being considered for restoration by the Maidenhead Waterways Restoration Group

This poem was one of six commissioned for the MWRG
Catherine Edmunds: WAKE UP, YOU RIVER! -

Chapel Arches, dried out by root sucking
lombardy poplars past old Graces Timber Wharf
drowned in silt, filled in for building. Remember?
Brunel was once here. Left his mark building bridges
where weir pools held drama of flash locks and flooding
washing their cargo of boats to the next lock
and there they stay, waiting and fading in twilight
silted and sunken, forgotten and gone.

Wake up, you river!
Water, resurgent, resound through your ditches
silt sink no longer, be dredged, willows watching
waders and skippers, damselflies, nymphs,
swim things return and be welcomed back home.

On either side there are lakes.

I think the notional Basingstoke Canal went straight on (WNW) and the York Stream is to the right (NW) as you go upstream.

The Maidenhead Waterways Restoration Group are planning a new lock and weir to control levels near here.
Above Green Lane Bridge the waterway divides. The York Stream is the western branch -

the channel/stream continues southwards under York Road and then passes under Brunel's historic GWR railway line in some 'style' - four 12ft diameter brick arches, but sadly now with hardly any water to be seen in even the centre two arches (the outer two have been adapted and are normally dry);

Above York Road Bridge and below Chapel Arches the Maidenhead Waterways Restoration Group envisage a basin and moorings plus riverside facilities.

There is a photograph of an old print of a Maidenhead Bridge, made in 1883 by Henry Taunt. It was generally assumed to be of a predecessor of the Maidenhead Bridge over the main river. However it has now been identified as of Chapel Arches in Maidenhead town centre - 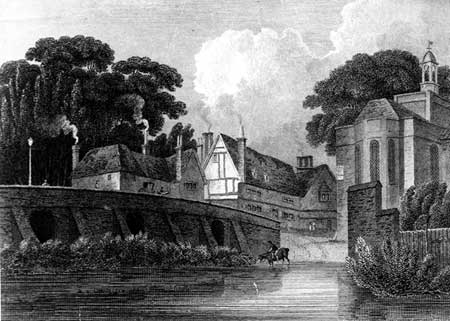 Richard Poad, chairman of Maidenhead Heritage Centre says of this -

The view is of chapel arches from the NORTH in about 1820, with the chapel of St Mary Magdalene and St Andrew on the west side in the middle of the road by the Bear Hotel.

the brick bridge of Chapel Arches (named after the chapel that used to be in the road above) stands at the Bridge Street/High Street junction. Chapel Arches comprises three massive brick arches (rebuilt in 1825) plus two or three smaller 18th century ones which are now blocked at both ends. The shops of the Collonade above are built on piles driven through the old Bath Road to the north of Chapel Arches and the space below was open to the public when dry until the 1960s. Today the arches appear quite shallow, but the structures go far deeper than is evident, the river bed having silted up and been filled in during adjacent building works over the years;

[ It is interesting to note that in the print the upstream side of the Chapel Arches bridge appears to be lined with bushes. That probably means that it was a flash weir and the bushes would have grown on the collected debris above it. ]

The water for these waterways comes from above Cookham Lock, or possibly to some extent from below Cookham Lock. The stream from the Cut first bypasses Bray Lock, then Boulters Lock, and then possibly Cookham Lock.
Bray Lock has a fall of 4'9", Boulters Lock has a fall of 7'10" and Cookham Lock a fall of 4'3". Together that makes 16'10" (4.15m).
I have punted St Patrick's Stream which bypasses the 5'10" of Shiplake Lock. It was so thick with weed that there was little current and I had to force my way through.
But I think that 16'10" is too much for a stream to "absorb". When it was navigated in the past it must have been by the use of flash locks (which is something we shall never see again - thank God!).
To take a barge upstream it was navigated until it ran aground, then a weir was built (blocked) behind it (and a weir above it opened) until it could float on up to the next weir. Any stream could in theory be navigated in this way. All you need is time and labour!

The restoration of the above waterways comprises PHASE 1 for the Maidenhead Waterways Restoration Group. The overhead clearances would at best permit narrow boats - but not anything taller. There would, they hope, thus be a circular route around Maidenhead Centre.
PHASE 2 would involve linking those waterways upstream. In practice that means the Widbrook / White Brook from the Cliveden Reach, running across Cookham Moor, up to the junction with Strand Water. The waterway would then turn south via an enlarged Maidenhead Ditch, joining the York Stream at Town Moor