Island between Bray Lock and Boveney Lock, pass either side
Use the Left bank side for Bray Marina.
Beware of shallows on the downstream point
1299: Queen's Eyot received its name from the grant of the manor of Bray to the Queen or Queen Dowager of England
1775:  Left bank channel improved
1794:  Shooter's Bucks

From [Monkey Island] to Queen's ayt there is a regular depth of water; there are however about 180 yards of the Bucks bank, which should be sloped and footed with chalk. A willow hedge should be planted at the head of Queen's ayt for about 100 yards in length, and there should be a set of sluices erected at the Fishing Bucks which might be shut down when the bucks are not in use, to confine the water to the barge channel.
From this place to Shooter's Fishing Bucks, the bottom of the river is of an undulating figure, with several shoal places, which should be ballasted away, and some contractions made to assist in keeping them down.
At Shooter's Bucks the fall in the river is very considerable, the velocity of the Water is great, and of consequence shallow, the depth of water was about three feet, and there were several barges a-ground Waiting for a flash of water from above. There is a pile in the middle of the river, and a willow hedge extends from thence down to the bucks, which are on the Buckingham side, and there is an ayt on the Berks side, with a stream behind it, which serves to carry away part of the water, and consequently lessens its depth. It appears to me that this stream should be shut up as well as that where the fishing bucks are, and the river should be contracted as much as it conveniently can ...

1898:  Colonel Victor Van de Weyer came to Eton College with a generous and timely offer. His suggestion was that the College might find a use for Queen's Eyot. Although Dr Warre (the Head Master at the time) and Mr Churchill went to visit the island on a wet and dreary afternoon when half the island was submerged, this did not put Dr Warre off and the Colonel's offer was accepted. He could not make a free gift of the island because the property was entailed, but he granted a ninety-nine years lease for a peppercorn rent.

The Original design for the Clubhouse on Queen's Eyot, 1900

Dr Warre had an attractive clubhouse built on the island, where boys could buy food and beer, and it soon became a favourite wet-bob excursion.

In the middle 1890s, when I first began to scull up here, the weeds extended every summer a third across the stream from each bank, between Surley Hall and Queen's Ait;  leaving a very narrow navigable channel.  Launches were commonly supposed to slow down on this reach;  which just as commonly they de more failed to do.

1923: Colonel Victor Van de Weyer's son, Major William, was not fettered by the entail when he succeeded to the estate, and he completed the transfer so that through the exchange of ten shillings the island formally became the property of Eton College.
1950: The Eton College Chronicle paid tribute to Dr Warre's foresight in making the island a special place, as its continued use showed the important part Queen's Eyot had come to play in the life of the School.
1990:  Queens Eyot Clubhouse destroyed by fire and rebuilt (architect Douglas Neill MRICS). The new clubhouse received a Mars Environmental Award.

The Queen's Eyot website gives details of the island's history and present facilities which include hire. 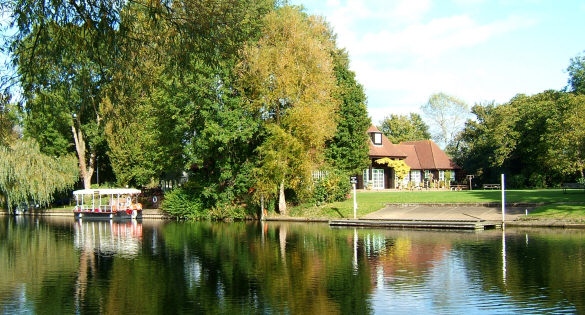