Left bank at Runnymede, hill with famous wide views of river (actually I can't find them - perhaps the wooded areas and zealous fencing by those whose houses have the view have obscured the old views from public gaze?) There is a possible glimpse from one window of the RAF Monument. 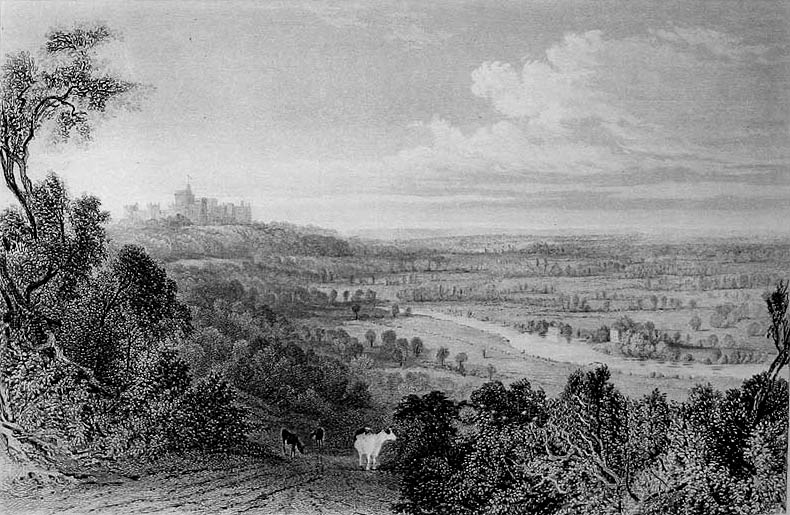 My eye, descending from the Hill, surveys
Where Thames among the wanton valleys strays.
Thames! the most loved of all the Ocean's sons,
By his old sire, to his embraces runs,
Hasting to pay his tribute to the sea,
Like mortal life to meet eternity;
Though with those streams he no resemblance hold,
Whose foam is amber, and their gravel gold:
His genuine and less guilty wealth t'explore,
Search not his bottom, but survey his shore,
O'er which he kindly spreads his spacious wing,
And hatches plenty for th'ensuing spring;
Nor then destroys it with too fond a stay,
Like mothers which their infants overlay;
Nor with a sudden and impetuous wave,
Like profuse kings, resumes the wealth he gave.
No unexpected inundations spoil
The mower's hopes, nor mock the ploughman's toil;
But godlike his unwearied bounty flows;
First loves to do, then loves the good he does.
Nor are his blessings to his banks confined,
But free and common as the sea or wind;
When he, to boast or to disperse his stores,
Full of the tributes of his grateful shores,
Visits the world, and in his flying tow'rs
Brings home to us, and makes both Indies ours;
Finds wealth where 'tis, bestows it where it wants,
Cities in deserts, woods in cities, plants.
So that to us no thing, no place, is strange,
While his fair bosom is the world's Exchange.
O, could I flow like thee, and make thy stream
My great example, as it is my theme!
Though deep yet clear, though gentle yet not dull;
Strong without rage, without o'erflowing full. 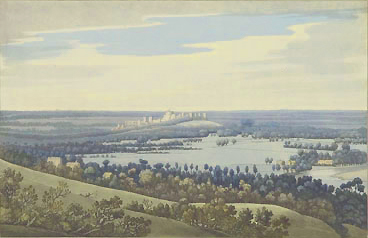 I keep trying to make up my mind - is the low lying meadow land flooded in this picture?

[Coming downstream] A mile or so from Old Windsor, and we enter the county of Surrey, on the right bank — Buckinghamshire remaining with us some way further on its left; the two great metropolitan counties then continuing on either side until, east of London, they meet the shires of Essex and Kent. The first object that arrests the eye of the tourist is the spire of the church at Egham; but his attention is soon directed to an object of even greater interest — Cooper's Hill. The hill is indebted for much of its fame to the poem of "majestic Denham"; it has other, and earlier, claims to distinction: although little more than "a steep", its slopes are gradual and ever green: it is beautifully planted — perhaps was always so — in parts; and is now crowned by charming villas, lawns, and gardens: it was, however, altogether a poetical fancy which thus pictured it —

his shoulders and his sides
A shady mantle clothes; his curled brows
Frown on the gentle stream, which calmly flows;
While winds and storms his lofty forehead beat —
The common fate of all that's high and great.

Denham, although born in Dublin, where his father was some time Chief Baron of the Exchequer, was "native" to this neighbourhood: here his ancestors lived and were buried. At Egham Church there are several monuments to their memory: his own dust reposes in Westminster Abbey. If he bestowed celebrity on Cooper's Hill, he derived hence tbe greater portion of his fame: the poem was published at Oxford in 1643, during tbe war between the King and tbe Parliament; its popularity was rapid, and has endured to our own time. Dryden described it as "the exact standard of good writing"; and "Denbam's strength" was lauded by Pope. 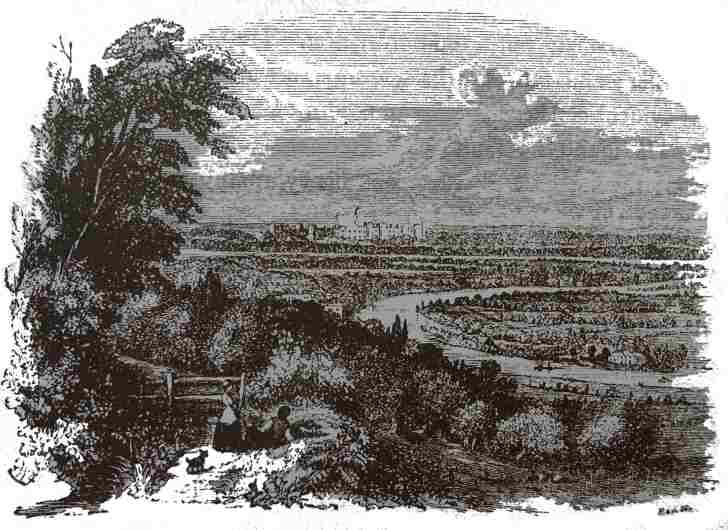 The eye, descending from the hill, surveys
Where Thames among the wanton valleys strays;

for at its foot is immortal Runnymede, and midway in its stream is the little island on which, it is said, John, the king, yielded to the barons, who there dictated to the tyrant terms that asserted and secured the liberties of their country. Runnymede is still a plain level field, unbroken by either bouse or barn, or wall or hedge. We know not if by any tenure it bas the right to be ever green; but we have always seen it during many years as a fair pasture — upon which to-day, as seven centuries ago, an army might assemble.

... the Left bank edged by what plain prose must belittle as a wooded rise, on whose top, pleasant rather than proud, stands a stately mansion that has become a banyan-grove of houses, at this moment in suspense as to their future destiny.
Cooper's Hill was in Victorian times the property of one of those meteoric financiers flashing across the sky of British commerce, the same who in London built for himself a house so large that no one ever lived in it.
Then the place made itself a new name as a college for the Indian engineering service; but this institution is now to be uprooted, and its halls, like those of Ossian's Balclutha, will soon stand desolate.
What may become of them is a question still in the womb of time. An academy for horse marines, a weekend club for members of Parliament, a training school for county councillors, are suggestions that have been made; but, to my mind, a truly Liberal Government might endow Cooper's Hill as an asylum for minor poets. 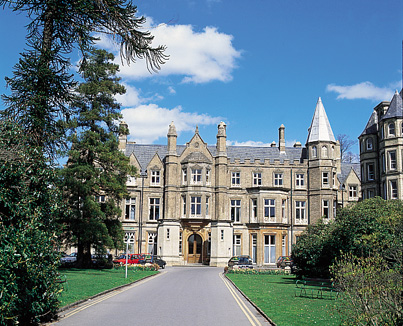