1299:  Sibille, ferrywoman of Chertsey, and her six men, were paid three shillings for 'wafting' the King and his family over the Thames on his way to Kingston
1340s:  A bridge may have been built by John de Rutherwyke -

1580:  Chertsey Bridge seriously in need of repair.  The bridge was 210 ft. in length over the water, and 15ft. in breadth between the rails with 7 ft. additional on each side beyond the rails.  It was divided into 23 bays.
1586: Camden's Britannia -

[The Thames] after leaving Berks washes Chertsey, which Bede calls "Cerotus' Isle", now scarce a peninsula except in winter floods.

Copley (1977) comments - Cerotus was a British personal name. The Old English "ey" was "island, well watered land" [presumably related to "eyot"]
Chertsey Abbey, a plan of the demesne from the Exchequer Ledger 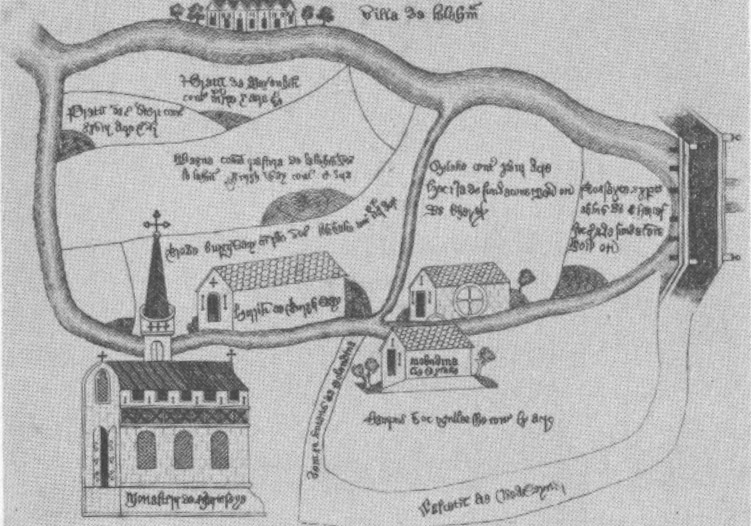 The watermill and the bridge are clearly marked.

CHERTSEY, on the Surry Shore, some Distance from the River, is a good Market-Town, and famous for its Retirement. The River, near this Place, has a wooden Bridge.

CHERTSEY bridge is a handsome plain structure, begun in 1780, and finished in 1784 under the direction of Mr. Payne, the architect, whose works make no inconsiderable figure on the river Thames.
It consists of seven arches, each formed of the segment of a circle. It is built of Purbeck stone, at an expence of about thirteen thousand pounds, which falls equally upon the counties of Surrey and Middlesex. The original contract was for seven thousand five hundred pounds. 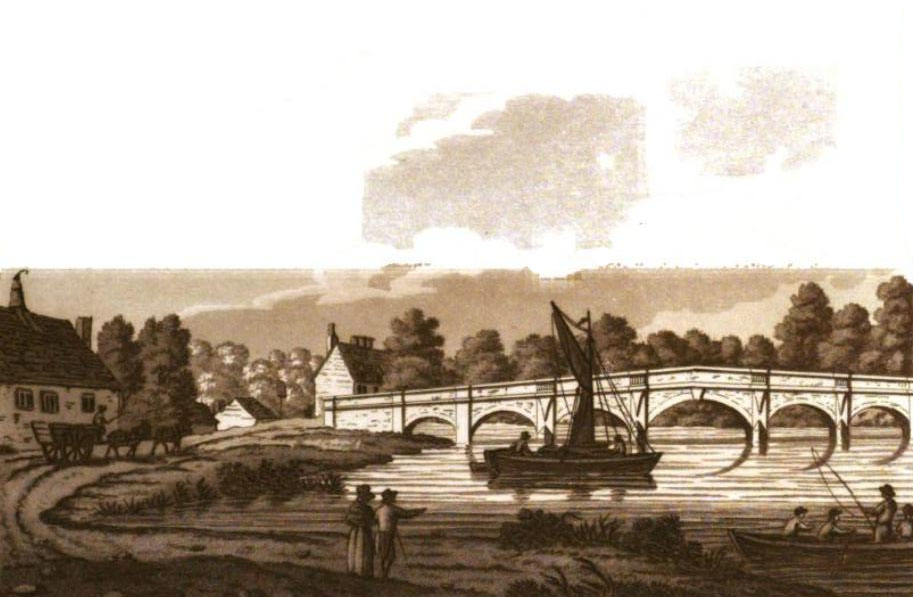 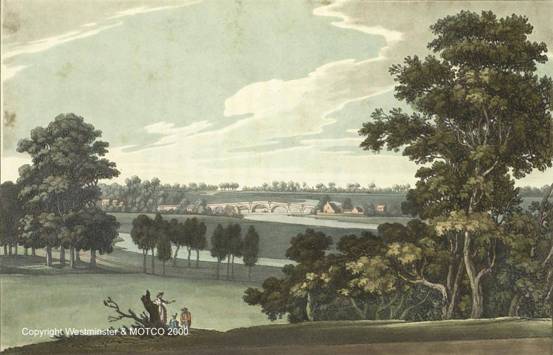 London: To Thirty Miles Extent, from an Actual Perambulation By David Hughson, 1808 -

Over the river Thames, from Chertsey to the opposite shore at Littleton, is a very noble bridge, built with Purbeck stone, at the joint expence of the counties of Surrey and Middlesex, toll free, for the erection of which an act of parliament was obtained.
It consists of seven arches; was begun by Mr. Brown, of Richmond, in 1783, and finished in 1785, from the architectural designs of James Payne, Esq. of Says, near Chertsey.

having completed the number of arches he was engaged for, and they not reaching the Surrey shore, that county was obliged at great expense, to supply the deficiency 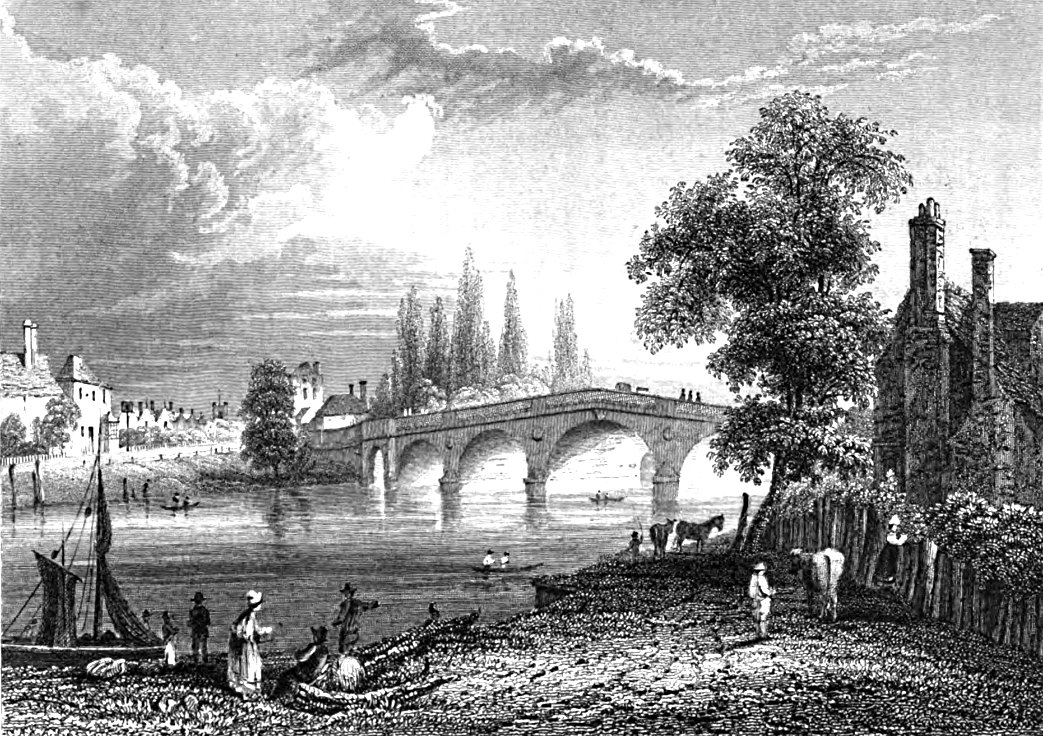 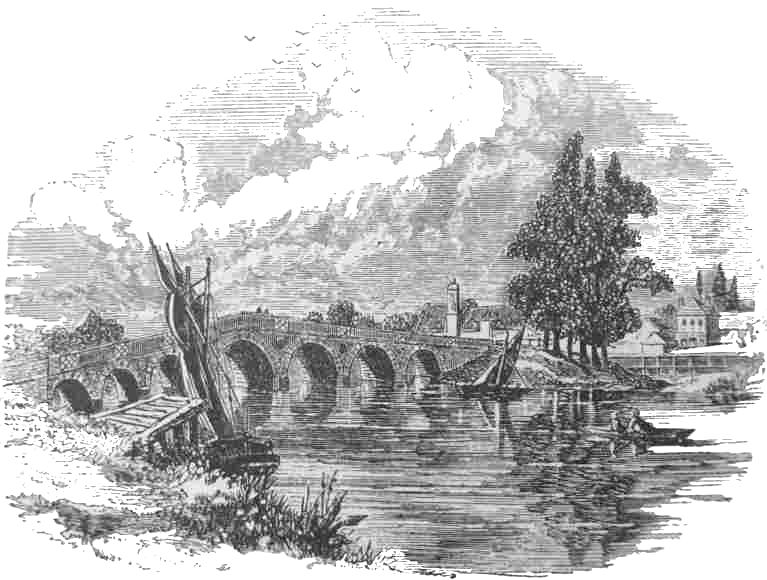 Immediately beside the banks, however, there is nothing to claim attention until he arrives at Chertsey Lock, right under which, apparently (for there is here a fall of some magnitude) is Chertsey Bridge.
Let us step ashore, and, having refreshed ourselves at "The Chequers", — the inn pictured in our print, — walk a mile or so to visit Chertsey town.
We are arriving at Chertsey, in the evening, after a pleasant day at Penty-Hook: it is eight o'clock; we hear the chimes of the curfew, heard very rarely in England now-a-days, but in the quiet little town, of small traffic and no manufacture, the ancient custom is still maintained, the curfew tolling so many times to denote the day of the month — once for the first, and thirty times for the thirtieth. *
* The ringing of the curfew is one of the oldest of English customs. Though popularly believed to have been introduced by William the Conqueror, it was more probably an ancient usage as a precaution against fire, in remote days of defective local rule, when houses were chiefly built of wood, and fires were frequent. The curfew, or couvre-feu, itself was a metal case, which closed over the wood ashes and extinguished them. Eight o'clock was the hour at which all persons were enjoined to put out fires and lights and retire to bed. On the continent the custom was general.
We pass the church, part ancient, and part new: if we enter it, it will be to see a beautiful bas-relief by Flaxman of the raising of Jairus's daughter. 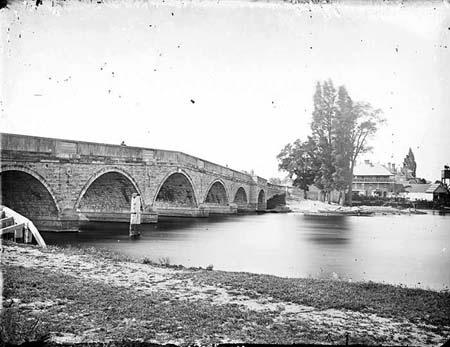 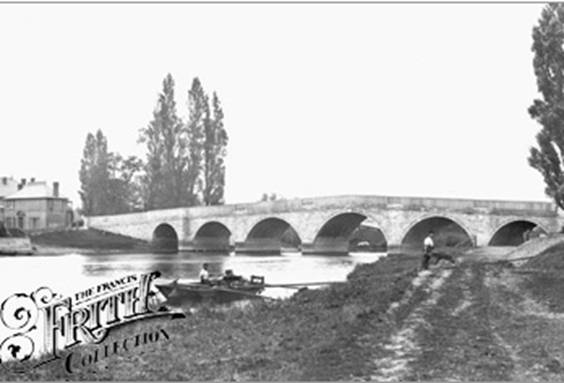 It is two miles up from Shepperton Lock to Chertsey. Pleasant old Chertsey is a half-rustic country town, with a flavour of the old, and yet a considerable aspect of the modern. Boatmen and anglers know it well, and cyclists on the road from Staines to Woking find refreshment in its inns.
In former times Chertsey was a place of note, through the neighbourhood of its great mitred abbey, which was a noble monument of devoted munificence and ecclesiastical splendour, now, save for a few vestiges, all swept away. ...
Remembering what splendid monastic piles still stand in lonely ruin elsewhere, as at Rievaulx, Fountains, and Glastonbury, it is difficult to understand how Chertsey Abbey should have been so utterly destroyed.
Even in 1752 Stukely marvelled at the completeness of the work of the spoilers.
"So total a dissolution I scarcely ever saw." he says.
"Of that noble and splendid pile, which took up four acres of ground and looked like a town, nothing remains."
The site of the Abbey, and the scene of its destruction, was between the little Abbey river and the Thames, and there a few fragments alone mark the position. 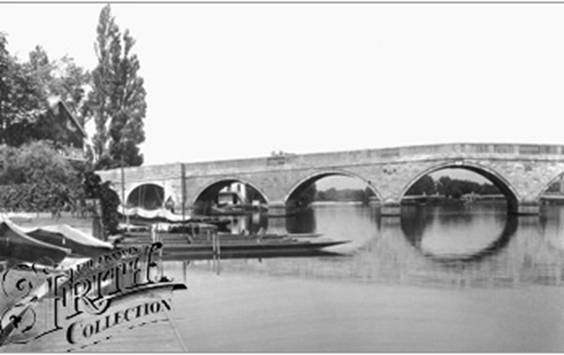 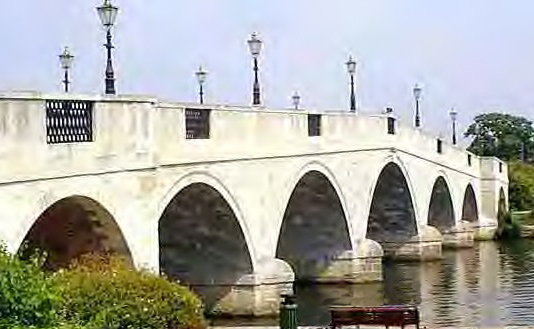 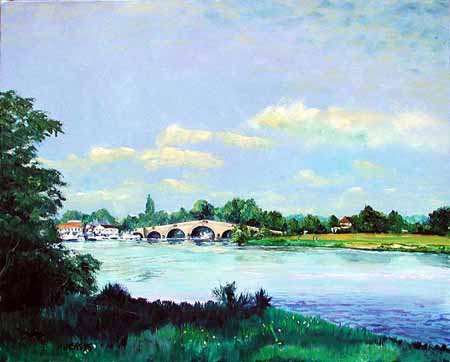 Since completing my project to paint all the bridges over the river Thames in 2006, I have been re-visiting some of them and have noticed that the surroundings in many cases have changed almost beyond recognition in a very short time.
The first one to come to my attention is Chertsey Bridge, probably because it is very close to my home in Weybridge. As you can see from the pictures Bates boatyard on the left has now been demolished and a new residential development by Laing Homes now occupies the site and is still partly under construction. 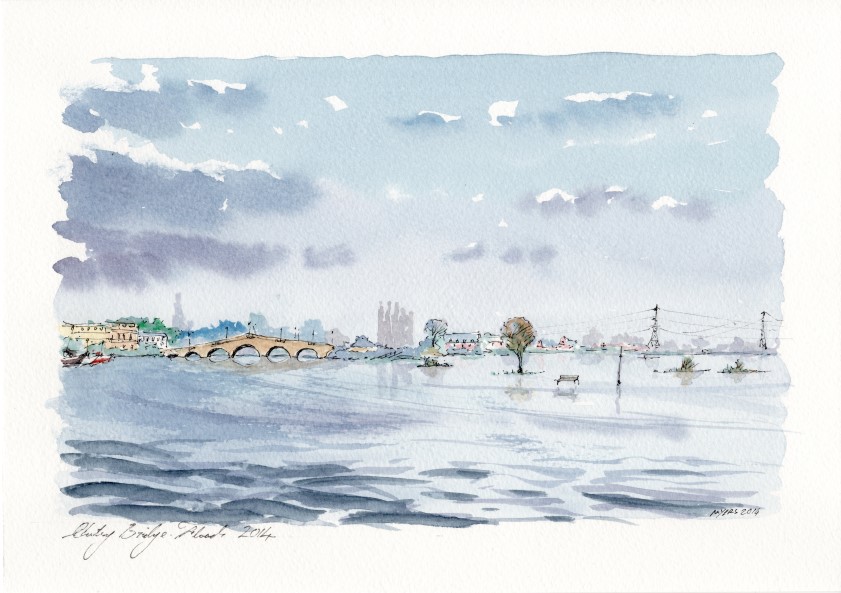 Whilst I am sad to see any riparian business disappear it is good to know that there are now many more people in a position to appreciate the river at this picturesque spot and perhaps become members of the River Thames Society in due course. These lucky residents now have a beautiful view of the historic nine arched bridge with its interesting light standards which are very distinctive at night.
The bridge was designed by James Paine and constructed in 1780, it retains the original design despite necessary strengthening at various times. As you will notice from the illustrations the painting (1996) was done in the summer when the river was running normally, the photograph was taken in mid-January 2008 when the river was in flood – this explains the different heights of the arches!
On the south west corner of the bridge is a bronze statue of local heroine Blanche Heriot who, in the 15th century, saved her lover by hanging on to the clapper of the bell at Chertsey Abbey thus preventing it from ringing the curfew which would signal his execution. Fortunately a royal messenger arrived with his pardon before the bell could ring again, no doubt they lived happily ever after.
On the north east corner of the bridge stands the Kingfisher pub which despite its ‘Olde Worlde’ look is in fact newly built. Much to the relief of local people it replaced a night club which was painted bright pink with black spots!
The other two corners are occupied by a hotel/restaurant complex (NW) and the pleasant recreation area of Chertsey Meads (SE) with its resident cows sheep horses etc. 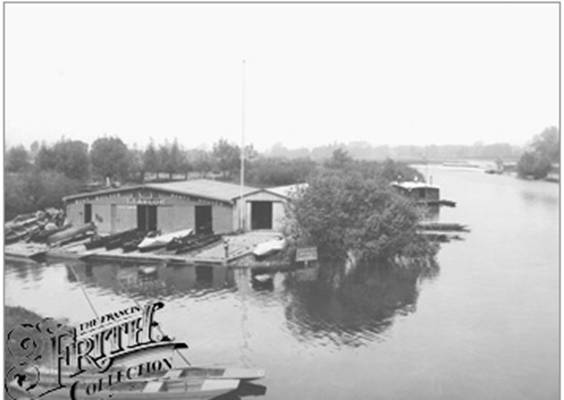