1774:  The channel to the north was cut. It looks no more artificial than the southern channel. I think the usual channel is the southern, however pass either side.
1798: Pharoah's Island was presented to Admiral Lord Nelson after the Battle of the Nile.
[And now suddenly we are in as near as the Thames gets to suburbia, with neat and expensive looking houses facing onto the river, each with its parking place for its boat, and opposite a car park with a boat dock. Nearest in the picture is the house of Admiral Nelson.] 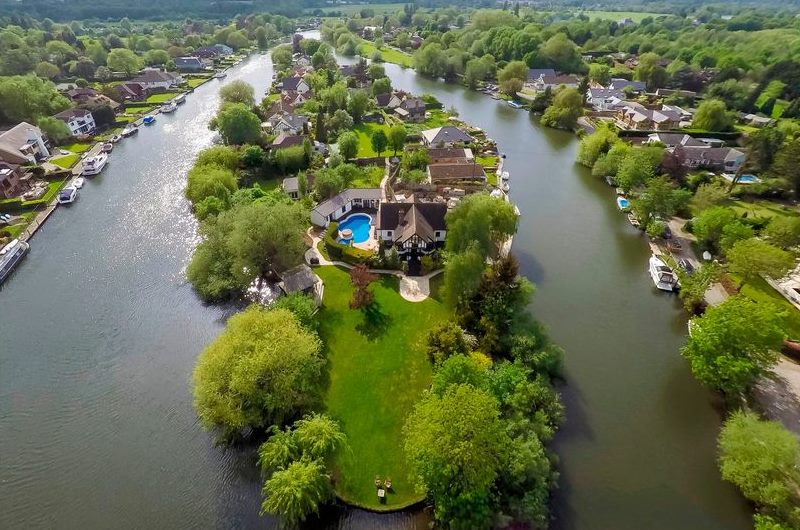 2019: A stunning home on a private island on the River Thames which once belonged to Admiral Lord Nelson has gone on sale for £2.25 million.
The luxurious property, which is on Pharaoh's Island near Shepperton Lock, Surrey and named Sphinx, was used as shooting locations for two John Boorman films - Hope and Glory in 1987, which was Academy Award nominated for Best Picture, and Queen and Country in 2014.
The home, which can only be accessed by boat, has an exclusive 90ft mooring on the island, which acquired its 'Pharaoh' name as it was gifted to Admiral Lord Nelson after he triumphed in the Battle of the Nile in 1798. The naval hero used the 920ft-long, 200ft-wide island as a fishing retreat and it is now occupied by 23 glamorous properties with Egyptian names.
Since then, the spectacular home has been owned by acting couple Ian Hendry, who starred in the first series of The Avengers, and his wife, starlet Janet Munro in the 1960s. Hendry also appeared in Get Carter in 1971, while Munro won a Golden Globe for her performance in Darby O'Gill and the Little People in 1959. But the actor died in 1984, aged 53.
The two-floored, three-bedroom property has a large downstairs entertaining space and 2,174sq ft of floor area. It comes with a raised alfresco dining area, a curved swimming pool and a guesthouse boasting two additional bedrooms.
The present owners have lived in the property for six years but are now selling it with estate agents Jackson Stops.
Pharaoh's Island has a real sense of community, hosting some excellent events throughout the year. The island green is in the centre of the island, and plays host to sports days and themed summer parties, whilst the main event of the annual raft race sees residents of the island compete in a competitive race along the river.

Left bank on the bend above Pharaoh's Island

Habitat improvement works were carried out on the Chertsey Bourne at Chertsey Meads in 1994. The scheme was to improve the bankside habitat following earlier dredging works. The works were undertaken between the rear of Mead Lane Caravan Park and Dockett Point and involved the creation of a fish refuge, riffles, bank re-profiling and the creation of margins, and tree work.

This may be another name for Dockett Point 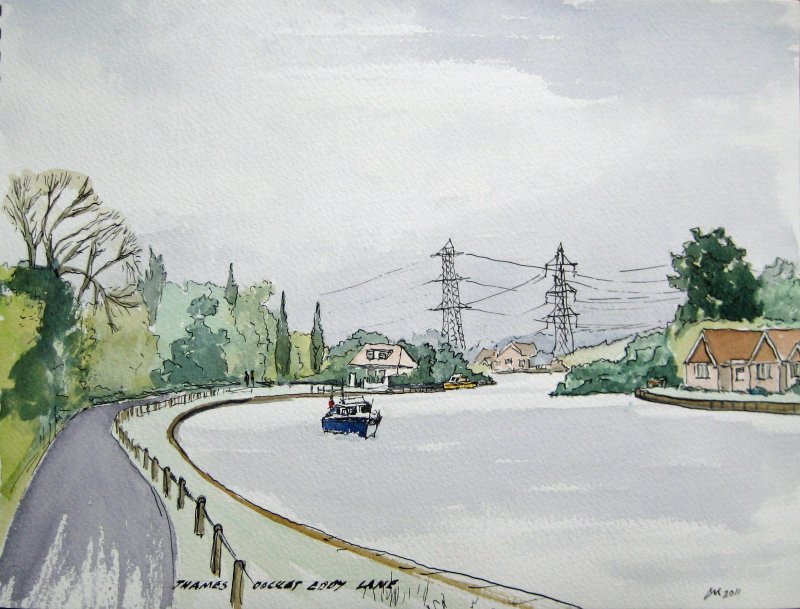 Left bank, halfway between Shepperton Lock and Chertsey Bridge, an Eyot only by courtesy.

Left bank below Chertsey Bridge. An attractive range of Day boats (amongst other things)