The Old River, the natural course, Right bank, avoiding Desborough Cut is very lovely and navigable for most boats (if not all?)

SHEPPERTON is a Place of no great Account, unless for being much frequented in the Summer Season, by those who are Lovers of Angling.

1901: The Thames Illustrated by John Leland

More than a dozen times between Walton and chertsey, which, as the crow flies, is a distance of but three miles, does the wayward and varied Thames turn, now to the right and now to the left, in great sweeping curves that are often contained within a right angle.
Infinitely diversified are the prospects as the noble stream sweeps between Halliford and Shepperton on the Middlesex bank and Weybridge on the other. The wooded slope of old Oatlands Park, the fur clad heights of St George's Hill, the beautiful meadows by the tributary Wey, the green and shadowy lanes, and the noble river contribute to make a series of most delightful pictures.

Halliford Bridge was washed away some years ago by the floods; and now, about half a mile below Halliford, the Surrey and Middlesex shores are connected by a brick and iron structure which is named Walton Bridge.

Anybody know how to sort this out? The pictures of the second Walton Bridge appear to show another bridge to the north west of the Walton Bridge. Was this Halliford Bridge? Did it bridge what was then the main channel?
British History Online - Hundred of Spelthorne says:

The Thames has changed its course at Shepperton, causing anomalies in the boundaries of the parish and county.
At Walton Bridge the boundary follows a minor stream so that the meadow called Cowey on the south bank lies in Shepperton and in Middlesex. Another small bit of the south bank farther west is also in the parish for the same reason. Both were considered by the parish officers in the 19th century to lie in Surrey, while in 1847 the parish unsuccessfully claimed six acres in Weybridge Mead [now Desborough Island].
On the north bank many of the fields were surrounded by ditches of running water and were described as aits, and there are references to erosion by the river at several times: money was left to the water defences of Shepperton in 1504, the old church seems to have been destroyed or rendered unsafe by encroachment of the river about the end of the 16th century, land near Walton Ferry was said in 1633 to have been washed away, and the loss of 20 acres in Halliford manor between 1650 and 1739 was attributed to erosion.
Elias Ashmole (1617-92) associated the cutting off of Cowey from Middlesex with the destruction of 'a church', presumably that of Shepperton, which he told John Aubrey had been swallowed by the waves.
Breaches in the banks at Stadbury (Hamhaugh Island) were repaired in the 18th century by the city of London authorities, who were responsible for this stretch of the river. They also had occasion to remove illegal fish-weirs: there had been a weir at Shepperton in 1086 and one is mentioned in the 14th century. The stakes found in the river at Cowey and popularly connected with Caesar's crossing of the Thames are very likely to have been the remains of one of the former weirs.

Right bank at the most northern point of the eastern, downstream excursions of the river.
The Thames Illustrated, John Leland, 1901 says

Halliford, a pleasant village, whose name is supposed, though doubtfully, to preserve the memory of the great ford across the Thames 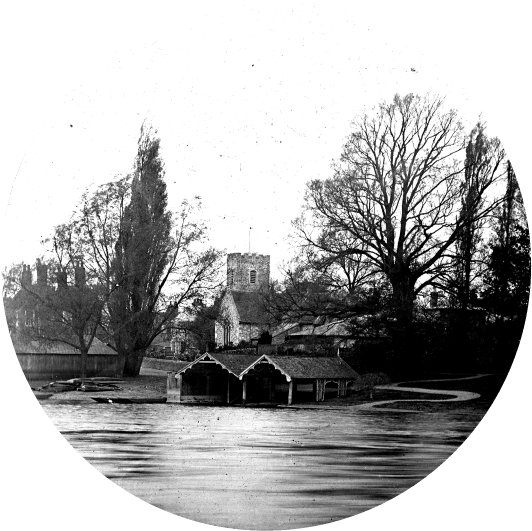 Right bank at the point furthest north on the old course
1996: The chandlery here was burnt down. There have been various planning applications. I am uncertain of the current position.

Right bank at the northern point of the upstream excursion of the river.
The Thames Illustrated, John Leland, 1901 says

Shepperton is a delightfully quaint place still, with fine houses standing amid trees, a green framed with chestnuts and elms, and a pretty surrounding country. ...
The Church looks charming from the water, but has been a great deal altered since it was built in the 16th century, to replace an earlier structure which stood in the river on piles. 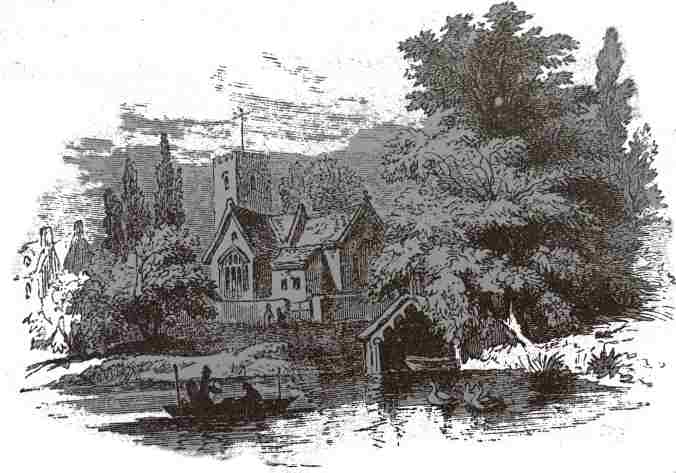 Close to the river are the house and grounds of W. S. Lindsay, Esq., M.P. Some fine trees hang over his boat-house. These grounds are, perhaps, the most beautiful to be met with all along the river-banks: those who have taste as well as riches have always the power to give to others a large share of the luxuries they themselves obtain from wealth. The distance to Shepperton by water from Chertsey Bridge is about four miles; but the direct way by land is not more than a mile and a quarter. Another turn of the river brings us to Lower Halliford.

In the churchyard ... is that rarest of all black swans, a pretty and graceful epitaph, which well deserves quotation: 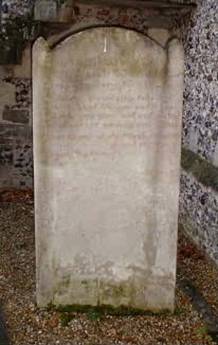 Long night succeeds thy little day,
O blighted blossom! Can it be
That this grey stone and grassy clay
Have closed our anxious care of thee?

The half-formed speech of artless thought
That spoke a mind beyond thy years;
The song, the dance, by nature taught;
The sunny smiles, the transient tears;

The symmetry of face and form,
The eye with light and life replete;
The little heart so fondly warm;
The voice so musically sweet.

These, lost to hope, in memory yet
Around the hearts that loved thee cling,
Shadowing with long and vain regret
The too fair promise of thy spring.


Margaret Love Peacock,
Born 1823,
Died 1826,
one of the children of
Thomas Love Peacock
who lived many years at Lower Halliford,
and died there, 1866.

Halliford and Shepperton are both pretty little spots where they touch the river; but there is nothing remarkable about either of them.  There is a tomb in Shepperton churchyard, however, with a poem on it, and I was nervous lest Harris should want to get out and fool round it.  I saw him fix a longing eye on the landing-stage as we drew near it, so I managed, by an adroit movement, to jerk his cap into the water, and in the excitement of recovering that, and his indignation at my clumsiness, he forgot all about his beloved graves. 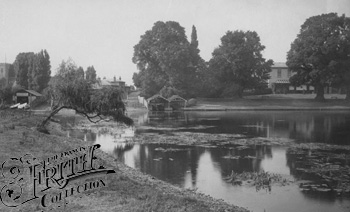 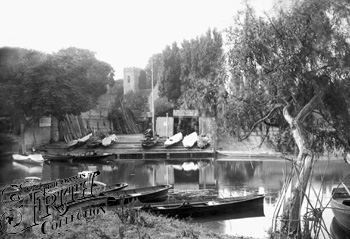 [Shepperton] The great delight of Wotton, of old, and of many others of the present day, who prefer quiet, the sweet air and patience in a punt, to the noise of the world, the quibbles of the law courts, and the deceptions of trade, and the Exchange. 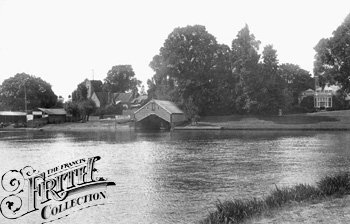 Shepperton lies low, and at flood-time has to submit to water invasion. The pretty backwater close to the church is called the Silent Pool.
Shepperton is hoary with age, though in springtime it blossoms and "utters joyous leaves" with all the daintiness and charm of youth. The village square, with the church, hostelries and houses, has a very old-world look.

Right bank just above Shepperton Church
Whilst I slowly punted round the old course, racing canoeists completed the entire circuit and took great delight in greeting me twice. One of them cutting the corner nearly came to a nasty end by colliding with the punt.