Originally called Petersham Ait, Glover's Island is situated in Horse Reach on the River Thames, between Richmond lock and Teddington Lock in the Borough of Richmond upon Thames.

There is another [Eyot] near Petersham Roots, a noted Place for Roach, Dace, and other small Fish, coming in Spawning Time to Hill, as it is called, otherwise laying their Spawn there in great Quantities, being a shallow, gravelly Place, with a swift Current, and in which, and in several other such like Places of the River, as BRENTFORD Gull, &c. Infinite Quantities of these Fish are destroyed at such Times by illegal Methods, to the evident and vast Destruction of this Fishery.

Just adjoining to Ham House, the fine Seat of the Earl of Dysert, on the Surry Shore, is the pretty Village of PETERSHAM, well adorned with Noblemen and Gentlemens Houses.

1872: the island was bought by a Richmond waterman named Joseph Glover, for £70.
1895: Joseph Glover put the island up for sale but Sir J. Whittaker Ellis (Charter Mayor of Richmond) declined to buy it for £5,000 and suggested that the Richmond Corporation should be approached.
The Amenities Committee considered the proposal on 2 April and decided:

That while the Committee think it desirable that the Island should be acquired for the Corporation if it could be obtained at a reasonable price, they are of the opinion that in view of the sum now named, it would be useless to enter into any negotiation for its purchase.

1896: Round London, an Album of Pictures. The View from Richmond Hill - I think this shows Glover's Island - 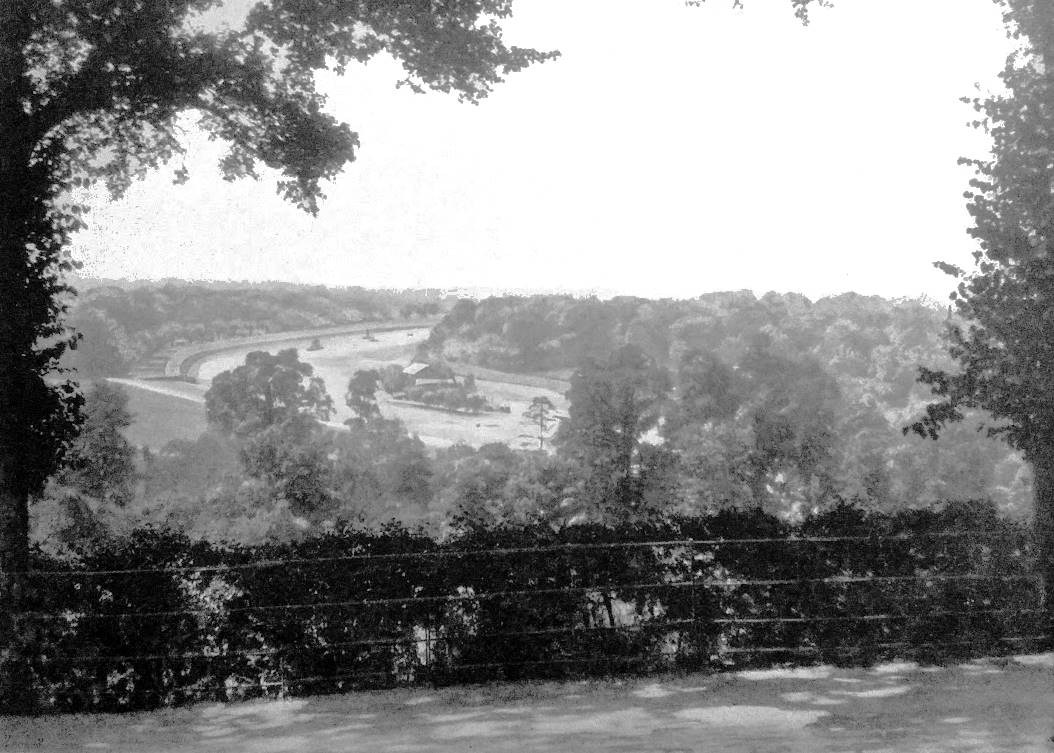 On arriving at Richmond, one ascends the broad, main street of the town, and presently reaches, at the top of the hill, a fine park, terrace, and avenue, commanding a truly magnificent view, a photograph of which is here reproduced [above].
The view from Richmond Hill, extending over the Valley of the Thames, which winds among meadows, woodlands, and beautiful undulations, has been celebrated by poets and depicted by painters, who seem never to have wearied of its tranquil charms. Pope, Thomson, and Wordsworth - not to speak of lesser bards - have praised in immortal verse the winding river, the "meads for ever crowned with flowers", the rich foliage and the extensive prospect over hill and dale;
and Turner, Sharp, and many other landscape painters have endeavoured to transfer to canvas the beauties of this place.
On the front of the hill sloping down to the Thames, the Dukes of Buccleuch had their famous pleasure gardens, attached to Buccleuch House on the edge of the river (famous for its river fetes and garden parties.
Not very long ago, however, the place was purchased by the local authorities, and now the public can wander at their will amid these lovely gardens, and enjoy the superb view which Richmond Terrace commands. This view includes the Highgate and Hampstead Hill, Harrow-on-the-Hill, Stanmore, Pinner, part of Buckinghamshire, the Berkshire Hills (between Maidenhead and Reading), St Anne's Hill, Cooper's Hill, Windsor castle and Forest, the heights near Farnham, and other prominent parts of Surrey.

1898: Joseph Glover caused a scandal by putting the island up for auction and suggesting it could be sold to Pear's Soap to erect a giant advertising hoarding.
Glover used this to blackmail the Richmond Corporation, offering it to them for £4,000 but although the Corporation wanted to buy the island, it was felt that there was no justification in spending such a large sum of money out of its funds.
There then followed a lengthy debate and correspondence in the local press about preserving the view from Richmond Hill and suggestions were made that the purchase should be funded jointly by public subscription and the corporation. By September, only £50 had been given to the public fund and the disclosure that Glover had purchased the island in 1872 for £70 did not help the collection.
The auction took place on 21 September but the highest bid was only £200. An unnamed resident had offered Glover £1,000 for the island (which he then intended to present to the Corporation), but Glover refused to sell and also withdrew the island from sale.
1900: Max Waechter, who lived in Terrace House, Richmond Hill, bought Glovers Island and gave it to the Council. The sale price was not disclosed.