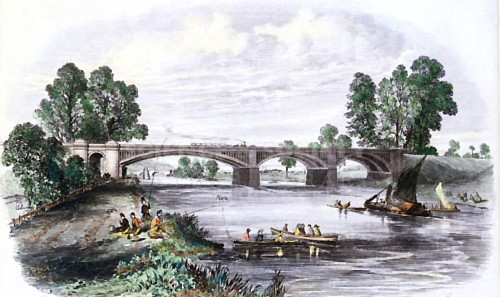 [ I think the bridge Mr & Mrs Hall refer to must be Richmond Railway Bridge. "Eastern boundary" is slightly ambiguous (ie wrong!) It would be more correct to say "Southern boundary"
TWICKENHAM BRIDGE over A316 was not built until 1933 ]

Passing under the railway bridge, which crosses the Thames at the eastern boundary of Kew Gardens, we have them on our right hand [going downstream] for more than two miles.

1891: A similar bridge near Norbury junction collapsed causing concern over this bridge.
1907: The original cast iron girders were replaced by steel using the original piers. It is now split in two with each separate bridge carrying one line.

A short distance above [Richmond] is the Railway Bridge (L. & S.W.R.), with a ferry across the water to the grassy Richmond Recreation Ground on the Surrey side.
Above this bridge the towpath is enclosed for promenade purposes. Cycles are forbidden, and fat dogs loll on sunny days in positions of distressful ease.
The houses of Richmond nearly touch the river, and the White Hart Hotel is at the water side. Behind the hotel is a genuine bit of old Richmond, a row of red-tiled cottages placed end on to the river and affording a vista of curious signs with "Teas", "Jolly Anglers" and other more or less refreshing indications.
Next is the Castle Hotel, and the stairway and piazza leading up to the town of Richmond ...
Probably no section of the Thames has been more frequently painted, sketched and photographed than that at Richmond.
Generations of builders have worked their way nearer and nearer to the water's edge, but a wise town council has in recent years made it their especial care that the river beauties shall not be spoiled.
Formerly the swift current and under-swirl made boating here a pleasure only to the skilled in watermanship. The useful lock, although only a half-tide one, has altered that and conferred a tremendous boon on the town and users of the river. 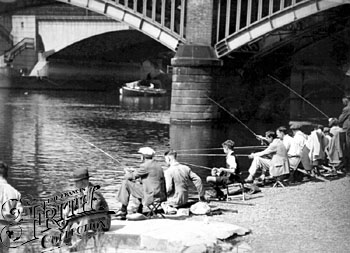 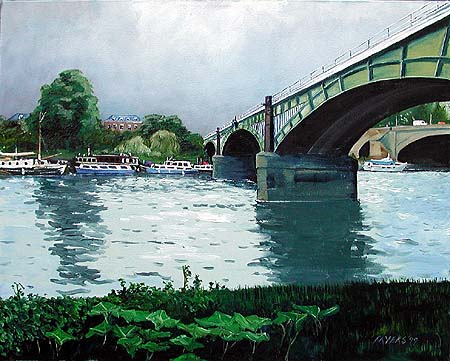