RICHMOND LOCK & WEIR
Closure of weir gates and prohibition of passage through weir arches is shown by three red discs below each arch during hours of daylight and three red lights at night.
Weir gate sill is 1.3m below ODN
Crest of boat rollers is 2.1m above ODN
Lock upper sill is 1.4m below ODN
Lock lower sill is 2.0m below ODN
Lock length 76m, width 7.9m
Headway within the lock above MHWS of 5.1m

Navigating Richmond Lock and Weir -
PLA owns and operates Richmond Lock and Weir, which is also the base for the Upper River Harbour Service patrols between Putney and Teddington Lock.
Situated between Teddington and Richmond, the weir comprises three vertical steel sluice gates suspended from a footbridge. Each gate weighs 32.6 tonnes and is 20 metres wide and 3.64 metres in depth.
For around two hours each side of high tide, the sluice gates are raised into the footbridge structure above, allowing ships and boats to pass through the barrage. For the rest of the day the sluice gates are closed and passing river traffic must use the lock alongside the barrage.
This period of free navigation can be dramatically changed due to prevailing conditions. In drought conditions the gates will be closed for longer periods, whilst in periods of high fluvial flow they may remain open for much longer. For current information please contact the Lock Foreman on 0208 940 0634.
The sluice gates ensure that the water level betwen Richmond Lock and Teddington Lock is maintained at or above half-tide level.
The lock is 76m long and 8m wide. Use of the lock, which has a Lock Foreman on duty 24 hours a day, is charged at £5 for all classes of vessel (2010 charges):
When the sluice gates are down and the weir closed, the following signals are in operation:
By Day - 3 red discs in the form of an inverted triangle shown at each arch.
By Night - An inverted triangle of 3 red lights at each arch.
In addition an illuminated sign on the upper end of lock entrance reads Weirs are closed please use Lock. The lock must be used in these circumstances.
For approximately 2 hours either side of high water the weir sluice gates are raised allowing free passage. At these times the following signal is displayed by day and night:
2 amber lights shown at each arch - weir open, free navigation.
Mooring trots along the Deer Park bank are expressly for the use of those craft waiting to use the lock. Small craft rollers in the Isleworth bank arch are available for canoes and skiffs instead of locking.
At low water the depth below the weir is restricted and care should be taken when approaching from downstream. The maintained level of water above the weir is 1.72m above OD Newlyn.

The diagram below shows the typical timing and heights of the tide: from Walton on the estuary (the solid blue) where the tide range is least and most approximates to a sine wave. That is what "drives" the tide in the Tideway. But as the tide comes up the river the narrowing banks cause a distortion (particularly just after low water) so that the flood tide comes up faster than the ebb recedes. And they also cause a higher peak until here at Richmond Lock the peak is two metres above the peak at Walton.
Notice that the lowest levels also get lower up to Tower Bridge (the white line) but then the rising bed of the river reverses this trend.
The diagram shows the Richmond heights as during the annual Drawdown when the weir is left open to facilitate maintenance of the Teddington - Richmond section. The result is show by the black line in the diagram below. The normal shape of that line does not go below 1.72 m ODN and it is the tide reaching this point that triggers the opening and shutting of the weir. 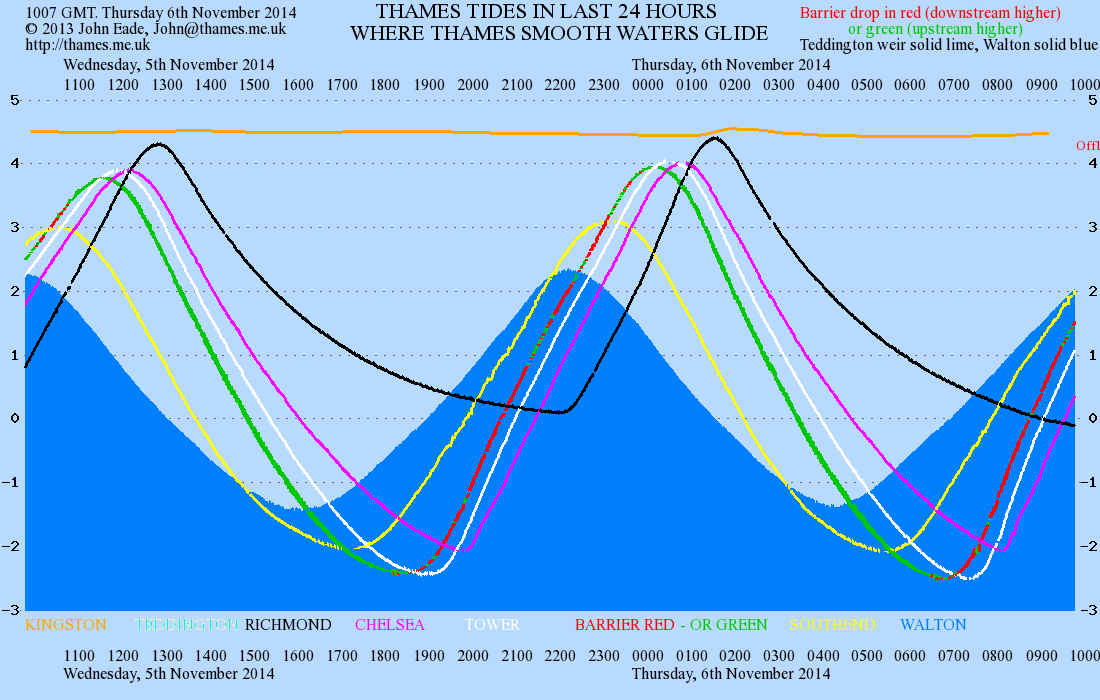 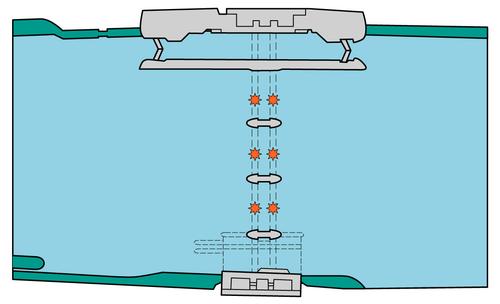 Richmond weir and lock from upstream

1832: The removal of the old London Bridge meant that the levels at Teddington were lowered some two and a half feet. The Thames at Twickenham and Richmond was sometimes little more than a stream running between mudbanks.
1890: permission was granted to build a half-lock and weir downstream of Richmond Bridge. A barge lock was constructed against the Surrey Bank joined by a weir to three roller slipways for small craft on the Middlesex bank. As a superstructure was required to operate the sluice mechanism, it was agreed to construct this in the form of two footbridges.
300 feet long, 28 feet wide. Twin high-level footbridges pass over a lock capable of handling six river barges and a weir controlled by lifting sluice gates. Originally hand cranked, the sluice gates are now raised by electric power.
Engineer: F.G.M. Stoney. Contractors: Ramsomes and Rapier
1894: The footbridges were ceremonially opened by the Duke and Duchess of York 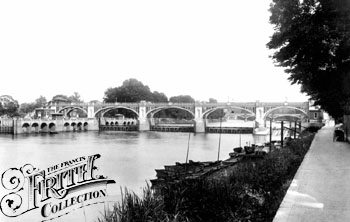 Richmond weir from below, Francis Frith

1938: Footbridge tolls abolished.
1990s: PLA completed a major, £4 million refurbishment of the lock and weir.
1994: HRH Prince Andrew, Duke of York was, appropriately, guest of honour at celebrations of the system's Centenary. 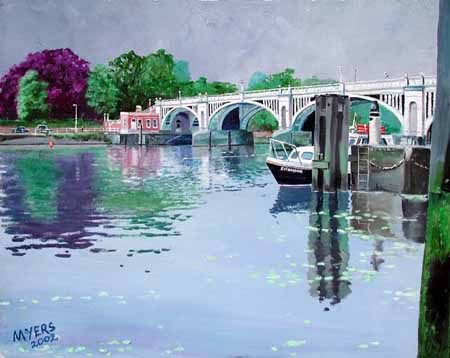