Note that the western (right bank, Islworth side) channel dries at low tide.

The next Eyght we come to is one at Isleworth or Thistleworth, which is large, and situated on the South or Surry Side of the River. 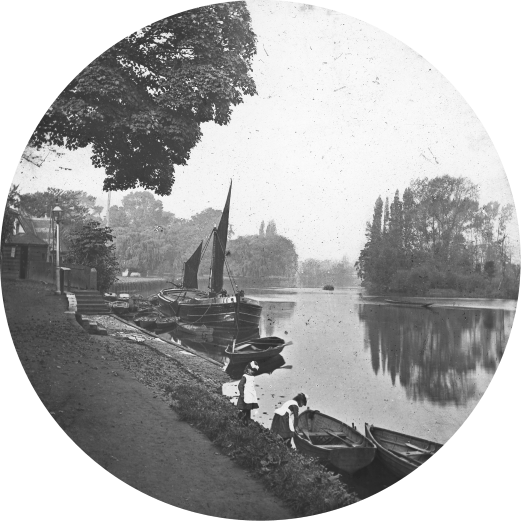 Lantern Slide (1883-1908) - At the Ferry, Isleworth
Pictures by W.C.Hughes. Thanks to Pat Furley, research by Dr Wilson.

Around the world astronomers were preparing for a rare astronomical event: a transit of Venus on June 3, 1769. Venus would cross in front of the Sun that day and not again for 105 years.
Dr. Stephen Demainbray, friend and family tutor of King George III, told the King about the transit. As a keen amateur astronomer, George wanted to see it. The royal summer residence in Kew had an observatory, but it was no longer usable, so the King decided to build a new one.
The King's Observatory
Sir William Chambers (1726-1796) designed the observatory which was built in the Old Deer Park in Richmond. Except for the movable telescope dome on top, the observatory looked like a villa.
Dr. Demainbray was made the King's Observer and given charge of the observatory known as the King's Observatory. That's its official address even today, but it was called Kew Observatory sometime in the 18th century and the name has stuck.
A decade after the observatory was built, three obelisks were laid out in the grounds as meridian markers to help in adjusting the telescopes. They're still in place. ...
Transit of Venus 1769
On the big day Demainbray set up the instruments and timed the observations. The royal family was present in force, as well as a number of other people such as the King's clockmaker.
The King was the first to see first contact - this occurs when the leading edge of Venus just touches the edge of the Sun's disk. In second contact the planet's following edge just touches the edge of the Sun's disk.
Unfortunately, viewed through a telescope the two obelisks to the south of the observatory" makes Venus seem to stretch out, so it's hard to tell when contact is made. This means the timings can't be precise, so even people in the same place won't see it at the same time. The timings at Greenwich, for example, differed from each other by a whole minute, though those from Kew differed by only a second. Was this due to superior observation at Kew or, as John Butler suggests, “It must have been difficult to disagree with the King.”
Kew Meridian
After the transit, the King's collection of scientific instruments was housed in glass-fronted cabinets in the observatory, as was the Queen's natural history collection. The royal children also got science lessons there from Demainbray's son, who was himself to be the King's Observer for nearly sixty years.
But it wasn't just a spare room for the royal family. For many years the King's Observatory used the Kew Meridian to calculate official time for the Houses of Parliament and other institutions. The time was kept accurate to the second by daily observations of the Sun as it crossed the meridian.