Site of Battle of Brentford 1016

The Battle of Brentford (1016) was fought some time between 9 May (the approximate date Canute landed at Greenwich) and 18 October (the date of the later Battle of Ashingdon) between the English led by Eadmund Ironside and the Danes led by Canute. It was one of a series of battles fought between Eadmund and Canute, ultimately resulting in the lands held by Eadmund's father Ethelred the Unready being divided between the two. Eadmund was victorious in this particular battle, but ultimately failed to defend the lands inherited from his father.

Then collected he [Eadmund] his force the third time, and went to London, all by north of the Thames, and so out through Clayhanger, and relieved the citizens, driving the enemy to their ships.
It was within two nights after that the king went over at Brentford; where he fought with the enemy, and put them to flight: but there many of the English were drowned, from their own carelessness; who went before the main army with a design to plunder.(Anglo-Saxon Chronicle)

Site of Battle of Brentford 1642

The Battle of Brentford 1642 was a small pitched battle which took place on 12 November 1642, between a detachment of the Royalist army, (predominantly horse with one regiment of Welsh foot) under the command of Prince Rupert and two infantry regiments of Parliamentarians with some horse in support. The result was a victory for the Royalists.

On 12 November under cover of an early morning mist Rupert's cavalry and dragoons attacked the two regiments of Parliamentary foot, one under the command of Denzil Holles and the other of Lord Brooke, which were barricaded inside Brentford.
The initial attack by the cavaliers on Sir Richard Wynne's house, an outpost west of Brentford held by Holles's regiment, was repulsed. So a Welsh regiment of foot were ordered into action by Rupert. The combined force successfully captured the outpost and carried forward their attack into Brentford itself. They drove Holles's men over the bridge into the defences manned by Lord Brooke's men. These in turn were driven out of the town into open fields.
The fighting continued into late afternoon, before the survivors of Holles's and Brooke's regiments were able to disengage under the protection of John Hampden's infantry brigade, which arrived from Uxbridge to cover their withdrawal. Nevertheless, a large number of Holles's men were drowned while trying to escape their pursuers by swimming across the Thames. The Royalists captured 15 guns and 11 colours and about 500 prisoners, including John Lilburne who was a captain in Brooke's regiment.

... Sion sheweth it selfe, a little Monasterie so named of the most holy mount Sion, which King Henrie the Fifth, when he had expelled thence the Monkes aliens, built for religious Virgins to the honor of our Saviour, the virgine Marie, and Saint Briget of Sion, like as he founded another on the rivers side over against it for the Carthusian Monkes, named Jesu of Bethelem.
In this Sion he appointed to the glorie of God so many Nuns, Priests and lay brethren devided apart within their severall wals, as were in number aequall to Christ his Apostles and Disciples: upon whom when he had bestowed sufficient living, he provided by a law that, contenting themselves therewith, they should take no more of any man, but what overplus soever remained of their yeerely revenew, they should bestow it upon the poore.
But after that in our fathers time those religious Votaries were cast out and it became a retiring house of the Duke of Somerset, who plucked downe the Church and there began a new house. Under this the small water Brent issueth into the Tamis [THAMES], which, springing out of a pond vulgarly called Brownswell for Brentwell, that is, in old English, Brig-well ...
And now with a great winding reach the river bendeth his course Northward by Gistleworth, for so was that called in old time which now is Thistleworth, [ and now ISLEWORTH ] where sometime stoode the palace of Richard King of Romans and Earle of Cornwall, which the Londoners in a tumultuous broile burnt to the ground.

... you see, before you enter Brentford, a fine old House near to the Thames, called SION-HOUSE, which had its Name from the Holy Mount, so called, when it was a Nunnery, founded by King Henry V. but afterwards, on the Dissolution of the Monastries, given by King Henry VIII to the earls at Northumberland, and is now the Estate of his Grace the Duke of Sommerset, who married the Heiress of that truly noble Family. It was for some Time the Residence of the Princess Anne of Denmark, afterwards Queen Anne, while she was out of Favour with King William III the Duke of Sommerset having made her a Compliment of it.

OF the many striking objects that present themselves from the Terrace, Syon House appears the most conspicuous; and from hence it is seen to most advantage, as its happy distance in this point of view renders it more picturesque than on a nearer approach.
IT was formerly a convent, founded by Henry V. in 1414, for sixty virgins of the order of St. Bridget of Zion, thirteen priests, four deacons, and eight lay-brothers ; each sex to live in separate convents, and not to be allowed to come out, except by the Pope's special licence.
By a letter, however, addressed from this convent to Thomas Lord Cromwell, from one Richard Layton, who styles himself his "assured poor priest", we find him - "certifyinge the incontinence of the nunnes at Syon with the friores, without the sanction of his holiness's licence; and that one Bushope would have persuaded one of his brederen, a smith, to have made a keaye for the doare, to have in the night time received in wenches for him, and his fellowes, and specially a wyfe of Uxbridge, now dwelling not far from the old Lady Derby, nigh Uxbridge, which wyfe his old customer hath byne many times here at the grates, communying with the fayd, and he was defirous to have her convoyed in to him.
The said Bushope also persuaded a nunne, to whom he was confessor -
ad libidinem corporis perimplend." [ For a translation use your imagination ]
WHETHER from these enormities, or from the partialities of this convent to the avowed enemy of the Sovereign, the Maid of Kent, does not appear ; but it is certain that the King made this monastery the first object of his resentment, at the dissolution in 1537, previous to which, he caused Richard Reynolds, a Brigettin monk, of Syon House, and an eminent doctor in divinity, to be tried for opposing his will, in the article of supremacy; and for which opposition he was hanged at Tyburn on the 4th of May, 1535.
AT the dissolution the revenues of this religious house amounted to one thousand nine hundred and forty-four pounds eleven shillings and eight pence farthing, per annum : after which period the abbess, nuns, lay-sisters, &c. to the number of seventy-three, were all pensioned during their lives. 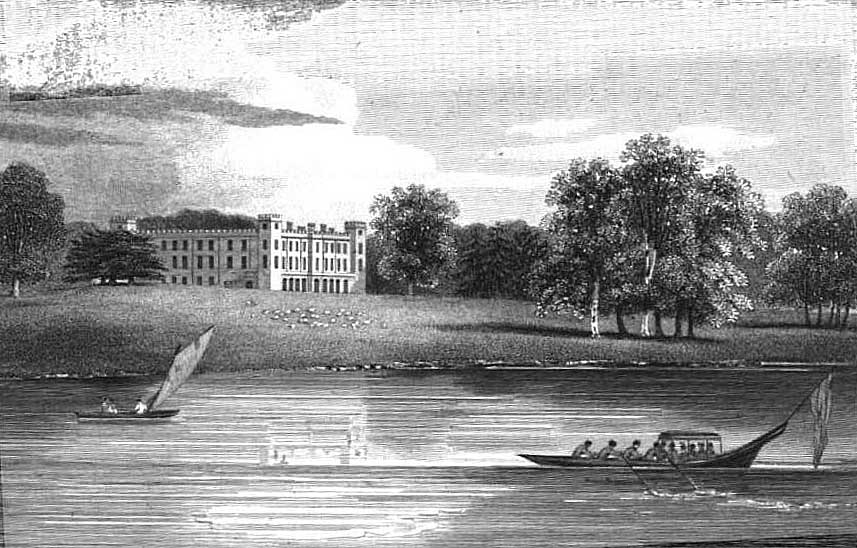 Sion House, which occupies the site of the ancient religious foundation, is close beside the church;
it was originally granted to a convent of Bridgetine nuns, by Henry V., in the year 1414:
they seem to have led a quiet life of much prosperity;
upon its dissolution, in the reign of Henry VIII., the revenue of the Convent of Sion was valued at the very large sum of £1731 8s. 4½d. per annum.
The king retained the desecrated buildings, and here imprisoned his unfortunate queen, Katherine Howard, while arranging her judicial murder.
The body of the same king rested here on the road to his mausoleum at Windsor. Edward VI., in the first year of his reign, gave the building and site to the Protector Seymour, Duke of Somerset.
On his attainder it was granted to the Duke of Northumberland, in whose family it has since remained, except during the short period when it reverted to the Crown during the reign of Mary — the forfeiture being occasioned by the ambition of the duke, whose son married the Lady Jane Grey: it was in Sion House she accepted the crown, having been conducted thence as queen to the Tower of London, so soon afterwards to die on a scaffold within its walls.
Queen Mary was induced to restore the nunnery at Sion, and endow it with the manor and demesnes of Isleworth. It was dissolved by Elizabeth, who, however, retained the lands until 1604, when they were again given to the Dukes of Northumberland.
The present house was constructed soon afterwards, and has some rich interior details. The exterior is singularly plain, a mere quadrangle of heavy stonework. It contains some fine pictures. One of the prettiest and pleasantest points on the river is the graceful Pavilion we have here introduced. 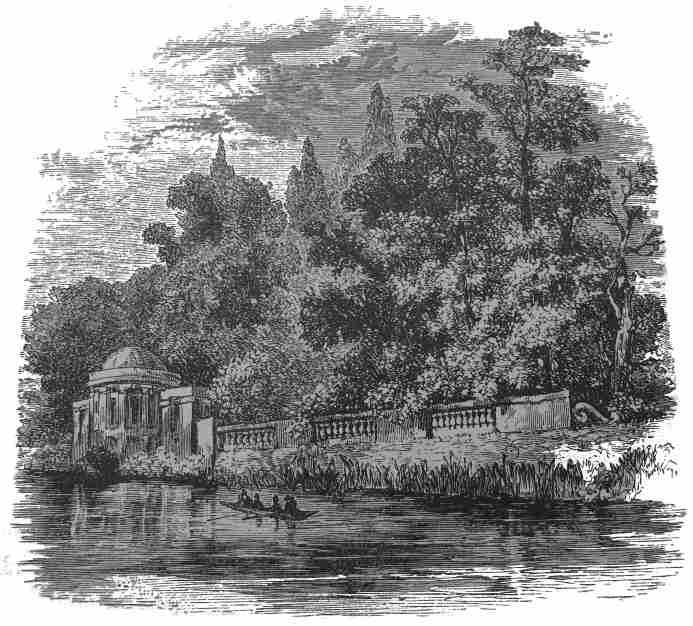