The first [Island] that I shall take Notice of is, at CHISWICK, which indeed is but small, and is planted, as most or all of them are, with Oziers, or Withies, of which not only Baskets, and other such Wicker Utensils are made, but Wheels, and other Engines used by Fishermen men to catch Fish. This Eygbt is situated on the Surry Side the River.

CHISWICK lies a little lower, on the same Shore, and is remarkable for several good Buildings, for the Seat and Gardens of Richard Earl of Burlington, a Nobleman much and justly distinguished for his fine Taste in the polite Arts, but particularly in Architecture, of his great Skill in which, he has given many grand Specimens.

There are few localities in the vicinity of London so interesting as the pretty and pleasant village of Chiswick. Its principal attraction is the charming and very beautifully decorated mansion of the Duke of Devonshire, with its delicious grounds and gardens.
"The house was designed and erected by Richard Boyle, Earl of Burlington, whose skill in architecture has been proved by his works, and whose encouragement of his favourite science greatly promoted the progress of that taste which has since produced so many fine architectural examples in this country."
The model which the architect generally followed is that of the Villa Capra, near Vicenza, the designer of which was the famous Palladio. It is magnificently furnished, and contains a collection of rare and valuable pictures.
Here Charles Fox died, on the 13th September, 1806;
and here George Canning "put on immortality", on the 8th of August, 1827.
The interest of Chiswick House is, however, surpassed by the church and churchyard of the village.
In the former the architect, Kent, the associate of Lord Burlington in the adornment of the house and grounds, reposes in the vault of his patron;
and here there is a fitting monument to Charles Whittingham, the printer, whose skill and taste gave to the Chiswick press a fame that " went over the world".
The graveyard contains the ashes of many persons of note:
the imperious Duchess of Cleveland here mingles with common clay;
here "repose the remains" of Cromwell's daughter, Mary;
here Holland, the actor, Garrick's friend, exchanged his motley for a winding-sheet;
here Lord Macartney, the pioneer to China, rests frum his labours;
here calmly sleeps a man of marvellous genius, the exile Ugo Foscolo;
here lies the painter Loutherbourg;
and here, still speaking from his sculptured tomb, reposes the great artist, William Hogarth. 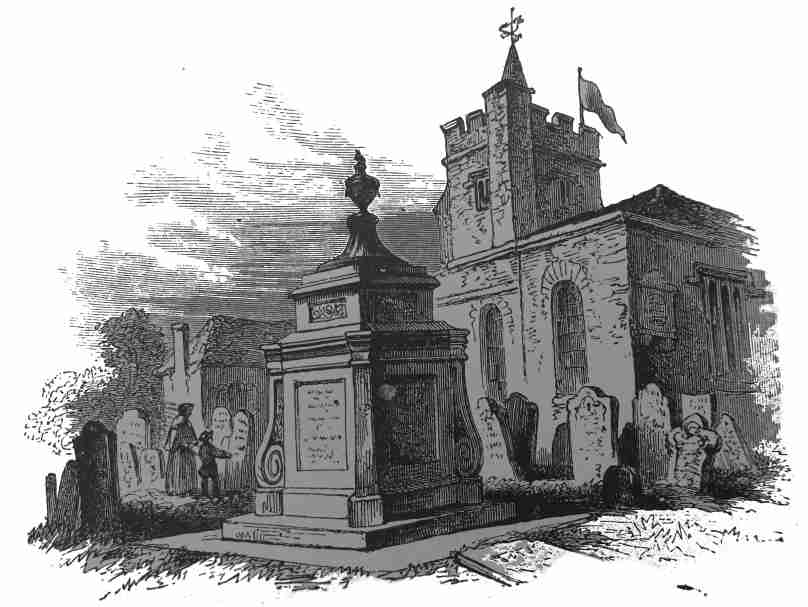 The monument was erected by a subscription among his friends, and the epitaph was written by Garrick: —

Farewell! great painter of mankind,
Who reach'd the noblest point of art;
Whose pictured morals charm the mind,
And throngh the eye correct the heart.
If genius fire thee, reader, stay;
If nature touch thee, drop a tear;
If neither move thee, turn away,
For Hogarth's honour'd dust lies here.

At Chiswick Hogarth lived, died, and was buried; and his house —
in which his predecessor was Sir James Thornhill,
and his successor the excellent and accomplished clergyman, Cary, the translator of Dante —
still stands, as a place of pilgrimage; it was his home, who, "while he faithfully followed Nature through all her varieties, and exposed with inimitable skill the infinite follies and vices of the world, was in himself an example of many virtues." *
* Vide "Pilgrimages to English Shrines: the Tomb of Hogarth." By Mrs. S. C. Hall.
Also "Tombs of English Artists: Hogarth", by F. W. Fairholt, Art Journal, April, 1858, from which we borrow our illustration and description. 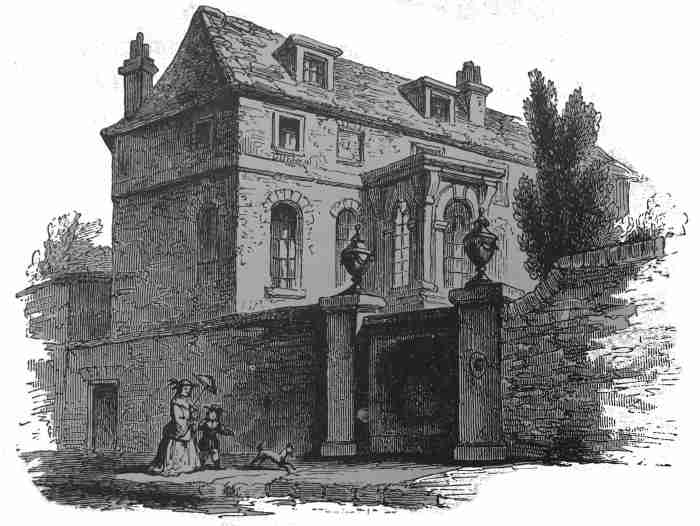 The house at Chiswick was that in which Sir James Thornhill resided at the time of his daughter's elopement with Hogarth. It is gloomy, with high walls; long walls of brick bound the way to it from the main street of the village. In the days of Anne it was far from the metropolis, but now it is as much a London suburb as Islington was then. Large as the house appears, it is really somewhat small, for it is all frontage, and only one room deep, without any back windows. The garden is not larger than such a house would require, and the small stable at its further extremity has over it a room Hogarth used as a studio. Against the garden wall are two narrow upright slabs of stone, commemorating the graves of his dog and bird. The words upon the former —
"Life to the last enjoyed, here Pompey lies" — are a satirical paraphrase on the epitaph to Churchill, the satirist, in Dover Church, with whom he had passed some years of friendship, but who had bitterly attacked Hogarth at the close of his career; not, however, without provocation on the part of the latter.
In Chiswick churchyard the painter reposes, and he is not the only artist buried there.
Loutherbourg [see above] rests under a most heavy and ambitious monument;
a slab against the wall near it records the name of James Fittler, the engraver;
and William Sharpe, another of our best English engravers, was buried, by his desire, near Hogarth.
The tomb of the latter artist is a not ungraceful structure, exhibiting on one side a basso-relievo indicative of his art; an inscription on the east side notes the death of Hogarth, in October, 1764, at the age of sixty-seven, and his wile in November, 1780, at the age of eighty.
His sister's death is recorded on the south side, in August, 1771, at the age of seventy;
and that of Mary Lewis, his niece, who acted as saleswoman at his house in Leicester Square, and who died in 1808, at the age of eighty-eight.
The other face of the monument has an inscription to his mother-in-law, the widow of Sir James Thornhill, who was first buried in this grave in 1767.
This monument had fallen into much decay, and had become the theme of public comment; but it has been admirably restored, and on a small piece of granite at its base is inscribed, — "Rebuilt by William Hogarth, of Aberdeen, in 1856." All honour to his northern namesake's liberality and taste!
We might linger long, and with advantage, in this the most interesting of the many graveyards of England, in which repose the ashes of the great;

It has been said that Thames eyots always seem to have been put in place by a landscape gardener. Chiswick Eyot is no exception to the rule.
It covers nearly four acres of ground, and lies like a long ship, parallel with the ancient terrace of Chiswick Mall, from which it is separated by a deep, narrow stream, haunted by river-birds, and once a famous fishery.
A salmon, perhaps the last, was caught between the eyot and Putney in 1812, though the rent of the fishery used to be paid in salmon, when it was worked by the good Cavalier merchant, Sir Nicholas Crispe. The close-time for the fishery was observed regularly at the beginning of the century, the fishing commencing on January 1st, and ending on September 4th.
There are those who believe that with the increased purification of the Thames, the next generation may perhaps throw a salmon-fly from Chiswick Eyot.
In the early summer of 1895 a fine porpoise appeared above the island. At half-past eight it followed the ebb down the river, having "proved" the stream for forty miles from its mouth, and being apparently well pleased with its condition. At Putney it lingered, as might be expected of a Thames porpoise, opposite a public-house. Two sportsmen went out in a boat to shoot it; instead, they hit some spectators on the bank.
Flowers abound on the eyot. The irises have all been taken, but what was the lowest clump, opposite Syon House, has lost its pride of place, for now there are some by the Grove Park Estate below Kew Bridge.
The centre of the eyot is yellow with patches of marsh-marigold in the hot spring days. Besides the marsh-marigolds there are masses of yellow camomile, comfrey, ragged robin, and tall yellow ranunculus, growing on the muddy banks and on the sides of the little creeks among the willows, and a vast number of composite flowers of which I do not know the names.
Common reeds are also increasing there, with big water-docks, and on the edge of the cam-shedding of the lawn which fronts my house some of the tallest giant hemlocks which I have ever seen, have suddenly appeared.
I notice that in Papworth's views of London, published in 1816, arrowhead is seen growing at the foot of the Duke of Buckingham's water-gate, which is now embedded at the back of the embankment gardens at Charing Cross. There is still plenty of it opposite Hammersmith Mall, half a mile below Chiswick Eyot.
The reach opposite and including the eyot is the sole piece of the natural London river which remains interesting, and largely unspoilt. I trust that if urban improvers ever want to embank the "Mall" or the eyot, public opinion will see its way to keeping this unique bit of the London river as it is. Already there have been proposals for a tram-line running all the length of the Mall, either at the front or behind it.
The island belongs to the Ecclesiastical Commissioners.
There is a certain sense of the country about the eyot, because it is rated as agricultural land, though its lower end is inside the London boundary. The agriculture pursued on it is the growing of osiers. These, frequently inundated by high tides, and left dry when the ebb begins, are some of the finest on the Thames. At the present moment (January 5, 1902) they are being cut and stacked in bundles.
In the spring the grass grows almost as fast between the stumps as do the willow shoots. This is cut by men who make it part of the year's business to sell to the owners of the small dealers' carts and to costers. Formerly, when cows were kept in London, it was cut for their use. During the year of the Great Exhibition milk was very scarce, and this grass, which was excellent for the stable-fed cows, fetched great prices.
In the summer the willows, full of leaf, and exactly appropriate to the flat lacustrine outline of the eyot and the reach, are full of birds, though the reed-warbler does not always return. He was absent last year. He is locally supposed to begin his song with the words "Chiswick Eyot! Chiswick Eyot!" which indeed he does pretty exactly.
Early on summer mornings I always see cuckoos hunting for a place to drop an egg. In the summer of 1900 a young cuckoo was hatched from a sedge-warbler's nest, and spent the rest of the summer in the gardens opposite this and the next houses. All day long it wheezed and grumbled, and the little birds fed it. In the evenings it used to practise flying, and at last flew off for good.