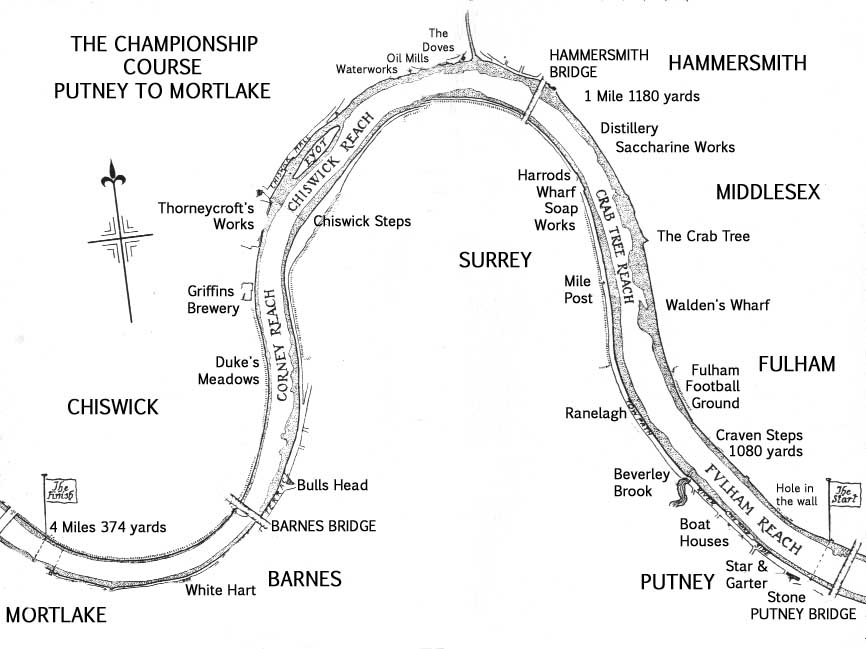 Cambridge won the toss and chose Surrey. The tide was fairly fast. At the start Oxford rated higher than Cambridge. Past the boathouses the umpire warned both crews, trying to avoid the clashing seen in recent boat races.

At the end of the Fulham Wall, the crews were level. Oxford moved into a lead of a few feet At the Mile Post Cambridge had a 1 second lead. The boats continued more or less level. At Hammersmith Bridge Oxford had just less than ½ length.

Conditions worsened with some choppy water. Cambridge moved to no more than a ¼ length lead.

Past Chiswick Eyot the heavier Oxford crew, with their shorter more powerful strokes, were coping with the conditions better than Cambridge.

At Chiswick Steps the boats were level. Oxford gradually moved into a lead of one length by Barnes Bridge and won by 3 lengths.

With no wind and very little tide Cambridge won the toss and chose the Surrey station. At the start Oxford took a slight lead. Almost immediately Cambridge steered sharply towards the Middlesex line and were warned twice in rapid succession by the umpire Rupert Obholzer.

Then Oxford, still on their own station and a matter of a few feet ahead, veered towards Surrey and were warned. Almost immediately after this and still well before the Black Buoy the blades of the two boats overlapped substantially. Cambridge bow lost his oar and the umpire stopped the race.

A restart was staged at the Black Buoy. Cambridge settled better and by Harrods were moving into a lead. At Hammersmith Bridge Cambridge led by 2/3 length. At Chiswick Steps the Cambridge lead was 7 seconds and they held that to Barnes Bridge.

It must have caught in the Oxford boat and got under. All I was thinking was just trying to get it out.
I wasn't expecting a restart or anything.

Umpire Rupert Obholzer said that when the oar fell into the water his options were either to disqualify Oxford, who had been warned as the boats nearly touched each other, or restart the race.

There had been worries that the Thames Barrier might have been raised to avoid flooding, in which case the race would have been postponed. As it was conditions were ideal with a strong tide.

Cambridge won the toss and chose Middlesex (only normally chosen when there is a wind from the north or the prospect a faster start enabling that crew to then choose their own course).

The starting procedure was lengthy and Cambridge were taken by surprise when eventually the race began. Oxford started well and took a ¾ length lead. Cambridge came back on them and were level by Fulham Football Ground. At the Mile Post Cambridge led by ½ length. Oxford then held them at that despite the bend in Cambridge's favour.

Oxford then reduced the Cambridge lead to a canvas at Hammersmith Bridge. Continuing a very even race Cambridge led by ½ length at Chiswick Steps.

But Cambridge may have over extended themeselves early in the race. Their number four man was in trouble, and slowly Oxford began to catch them. At Barnes Bridge the gap was only ½ second. In the last 100 yards Oxford pushed and won by 2/3 length.

It seems possible that Cambridge's poor start lost them this fantastic race with the crews overlapping the entire 4¼ miles without any clash of blades.

Two days before the race Cambridge hit the Harbour Masters launch, damaging the boat and several riggers and blades and also crucially breaking the wrist of Canadian bow Wayne Pommen. 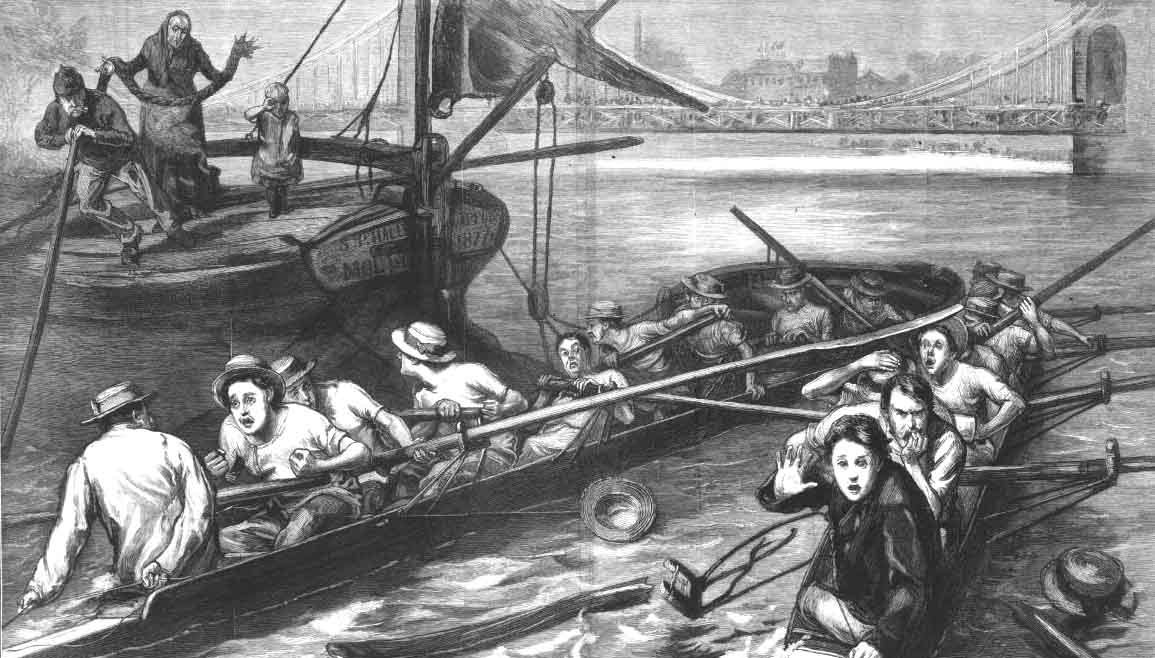 1870s: THE FOUL - A COXSWAIN'S NIGHTMARE ON THE EVE OF THE UNIVERSITY BOATRACE
"For whatsoever we perpetrate we do but row, we're steered by fate" Hudibras

Cambridge won the toss and chose Surrey. Oxford took off at 47 and led by a third of a length at the Mile Post. Cambridge, with a slower longer stroke in some choppy water steadily came back to a lead of a few feet at Harrods Depository. The umpire was continously warning both crews along this section.
Cambridge led by one second at Hammersmith Bridge. However Oxford succeeded in holding them to that right to Chiswick Steps. Warnings from the umpire continued. Oxford then pushed and were 2/3 length ahead at Barnes Bridge.

Cambridge then began to catch Oxford and at the finish, rating 41, failed to overtake them by just one foot.


The Livingston brothers in opposing boats produced a book: Blood over Water which is a fascinating insight into the boatrace.

Cambridge were favourites. And Cambridge won the toss and chose Middlesex.
Oxford made a good start and took an early lead which they opened to 2/3 length.
Cambridge then came back to level.
There was a clash of oars as they came out of the Fulham Reach and Cambridge began to lead. Then a more serious clash unseated the Oxford bow.
Before Oxford could recover Cambridge had clear water. They then opened up a lead of three lengths. Oxford had no answer and Cambridge went on to win by six lengths.

Before the main race, as well as the usual Isis-Goldie reserves race there was a replica 1829 race rowed in gigs and umpired from the Victorian Steam Launch Consuta -

The replica race was a splendid affair with the boat crews and Consuta crew in period dress. Speeds were quite fast considering that the replica boats were big hulls without swivels, or sliding seats, this race was won by Cambridge in about 22 minutes.

Tony [Consuta's engineer] said that when he took Consuta down to Putney from Brentford he ran Consuta up to 500 rpm on the engine. The re-enactment race itself however only required 300 revs average with the start a bit faster at 360 rpm. Our revs to mph conversion chart works out roughly as about 3 mph for each 100 rpm.

Cambridge were said to have the technique and Oxford the muscle power.

But Oxford made the better start, Cambridge caught up. Oxford made a big push at Chiswick Steps, and Cambridge, though they tried and tried could not get back onto terms and Oxford won by two lengths.

Oxford had the better start. They were constantly warned by the umpire along the Fulam Reach as they pushed Cambridge wide around the first bend.
Cambridge came back up to level and a brief lead at the Mile Post.
The two crews were level approaching Hammersmith Bridge, but then Oxford opened up a 1 second lead.
Then, in rough water, Oxford pushed and took a two length lead. Cambridge were in difficulties with the chop and their boat was then sitting low in the water. Oxford had a 6 second lead by Chiswick Steps, 11 seconds by Barnes Bridge, and Oxford won by 5 lengths.

Oxford won the toss and chose Surrey. They started well and took a slight lead by the Mile Post. At Crab Tree Reach the umpire warned Oxford a number of times.
At Hammersmith Bridge Oxford were half a length ahead. But Cambridge came back to level by Chiswick Steps and then began to open a lead. At Barnes Bridge Cambridge led by a length and a half and went on to win by a length and a quarter.

In 2008 OXFORD WON by 6 lengths. Time 20 minutes and 53 seconds. Oxford 74, Cambridge 79.
[ 2008: RESERVES ISIS by 3.25 lengths 20:43 Faster than winner! ]
Report
With an average tide and the race scheduled 94 minutes before high tide, the wind was too high for comfort and there were predictions of a possible sinking. Oxford were the heavier crew and clear favourites. When the Cambridge stroke had to be replaced only three days before the race, due to a heart murmur, the presumption was an Oxford victory.
Cambridge won the toss and chose Surrey. Oxford had the better start and were then warned for their steering. With the inside of the first bend they took a half length lead. But then Cambridge pushed and held Oxford at a crucial moment. At the Mile Oxford had three quarters of a length, which Cambridge whittled down to half a length at Harrods and then by Hammersmith Bridge Cambridge led by a few feet. Cambridge were warned for their steering and the blades were interlocked but no apparent clashes occured and the boats separated.
At the Eyot, where Cambridge were leading by one third of a length Oxford pushed decisively and themselves took a third of a length lead. They opened this to one and a half lengths at the Crossing and then to two lengths as Cambridge went inside them (on the Middlesex station) looking for calmer water. But Cambridge had rowed themselves out and Oxford opened the gap to win by six lengths.

Oxford started as favourites with a heavier more experienced crew. Cambridge won the toss and chose the Surrey station. They had a poor start - perhaps attributable to nerves, but settled quickly and held Oxford around the first bend which favoured Oxford. Cambridge looked the better crew at this point and slowly took a lead.
The umpire was nervously warning both crews as the coxes steered an almost ideal course through this section. However his nagging began to take its toll and it seemed to me that both coxes then began to take his threats seriously and overreacted, slowing their boats by turning too sharply.
(Armchair coxing is easier than the real thing - and armchair umpiring with hindsight is a doddle!)
With Cambridge leading by three quarters of a length there were several clashes between the Cambridge 7 and the Oxford 2. Both boats appeared to be unsettled by this - but Oxford recovered much more quickly and rowed through Cambridge around the outside of the bend which was then in Cambridge's favour. Later when Oxford were ahead a similar situation occurred but Cambridge had no answer and Oxford then slowly rowed away from them. There was a dejection in the Cambridge crew (which may simply have been the recognition of the reality of defeat staring them in the face) - but winning crews come through despite setbacks.
Oxford should have won on size and experience - but Cambridge had the grit to very nearly overturn those odds.

Somehow, something has to be done about the steering clashing issue. It is not simple because of the tidal stream which removes any possibility of buoying the course. Hesitantly I put forward the proposition that basically the coxes be left to it - and that the umpire should confine himself to applying a clear set of rules which would define disqualification if necessary. That means that a boat race with so many millions watching might be decided by an umpire disqualifying a leading boat - and that would be quite unbearable!


Considering the race as one continuous whole 1829 - 2009 the crews have covered about 664 miles.
Assuming 1 length = 3 seconds and 'Easily' to mean 10 lengths, 30 seconds, and excluding races in which less than two crews finished,
In about 51 and a half hours racing CAMBRIDGE LEAD by 5 minutes and 38 seconds, about 113 lengths, (which is about 2 seconds, .7 of a length per race)

And the moral is - WHEN CAMBRIDGE WIN THEY WIN BY MORE!
Check my Spreadsheet - and tell me any errors!


Throughout the boat race reports there is some question as to the relationship between lengths and time interval.
Before 1977 the assumption was 3½ seconds = 1 length.
The usual assumption since 1977 is 3 seconds = 1 length; this is about right for an 18 minute race speed.
Given a standard length boat of 62 feet and assuming that the finishing speed is the average speed over the race:-