I work at the Ferry at Chelsea. On the 9th of April, about a Quarter past Nine at Night, three Soldiers came down to the Ferry, and wanted to go over the Water. I desired them to lend a Hand, and help me to pull up the Drag; they did so, and got in.
Then they bid me "Pull away, pull away, - make Haste over"; this they said, all the Way they went.
I landed them at Battersea-Ferry, and they asked me the Way to the King's Arms. I don't know the Men again, for though it was Moon-light, it was dull Moon-light, and cloudy: Two of them were in Soldiers Cloaths, and the other was not, but whether he had a Coat or a Frock on I can't tell; for they hurry'd me, and said they would give me 3 pence farthing, which was seven farthings more than my Fare; and when we reach'd Shore, they left the Money upon a Bench, and went away before I could get a-shore.

... the pretty little Town of BATTERSEA, where is the Seat of the Right Honourable Lord Viscount St. John of Battersea; but it is principally inhabited by Gardeners, who contribute much to the Supplying of the Markets in London and Westminster, with Garden-Stuff of all Sorts, and once very remarkable for Esparagus. 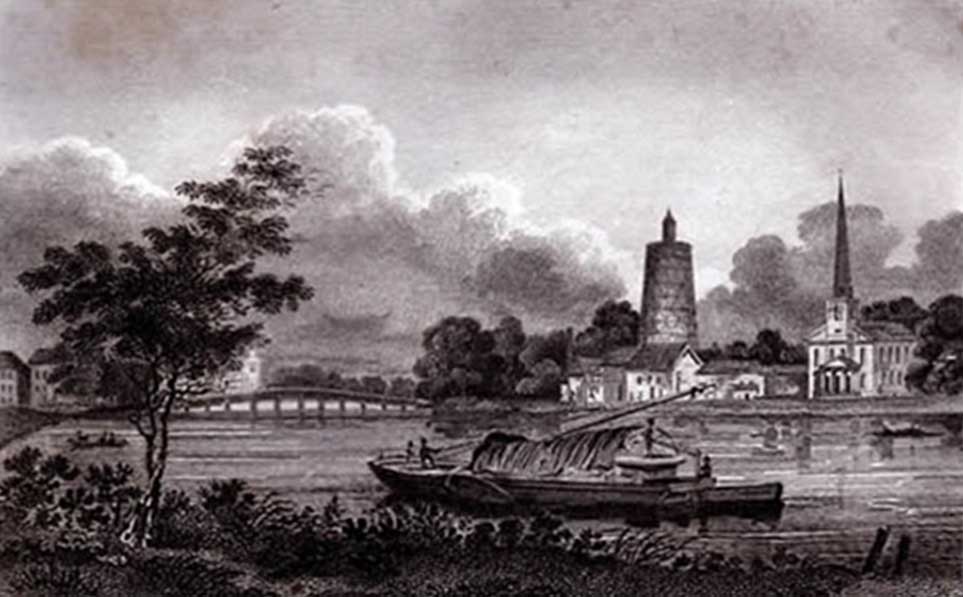 from Picturesque View on the Thames, Samuel Ireland, 1802 -

WITHIN two miles of the capital, the curious observer is again offended with another tasteless object, the wooden bridge of Battersea, where the breadth of the river, and it's contiguity to the metropolis, certainly demanded a more elegant structure.
THE original cost of this bridge was twelve thousand eight hundred pounds, which sum was raised by sixteen persons, in shares of eight hundred pounds each. The present heavy expence of toll, it might reasonably have been supposed, would have defrayed the extra charge of a bridge of stone; but, I am informed, that heavy as that expence may appear, it barely affords common interest to the persons concerned in the undertaking. If the advantages arising to the subscribers from the toll of this bridge are so inconsiderable, it is much to be regretted, that some parliamentary aid had not been solicited, to have produced a sum equal to the expence of raising a magnificent structure.
THE contracted scale on which this undertaking was begun, (in consequence of which the bridge was thrown across a narrow part of the river) has been productive of great inconvenience. It should certainly have abutted on the Chelsea side, nearly op- posite the church, in which direction it would have stood in a right angle with the current of the river : not being so placed, it's piers are continually receiving injury from the vessels and barges striking against them. 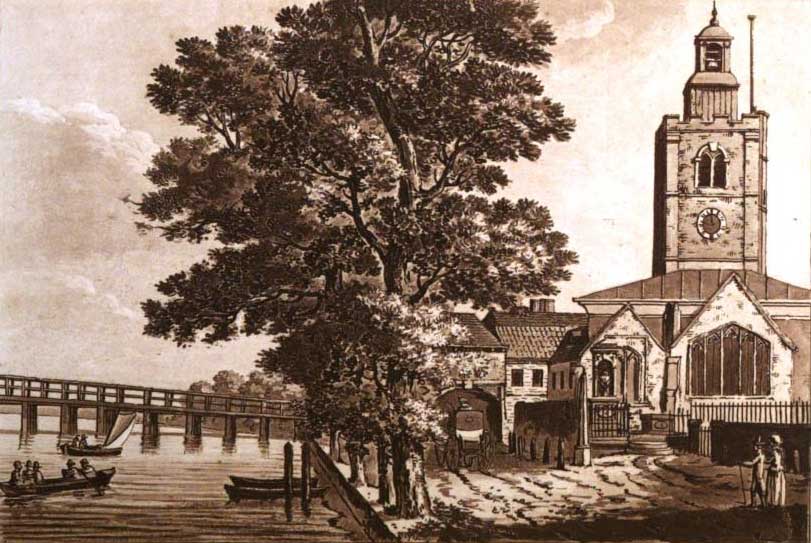 from "THE THAMES; or GRAPHIC ILLUSTRATIONS Of SEATS, VILLAS, PUBLIC BUILDINGS, AND PICTURESQUE SCENERY" by William Bernard Cooke, 1811 -

[Battersea] bridge, which stretches across the river from Chelsea to this place, and bears its name, is a wooden structure, and unworthy of its vicinity to the metropolis. It is also most injudiciously placed, as it does not stand in a right angle with the stream, so that its piers are continually receiving injury from the vessels and barges striking against them. 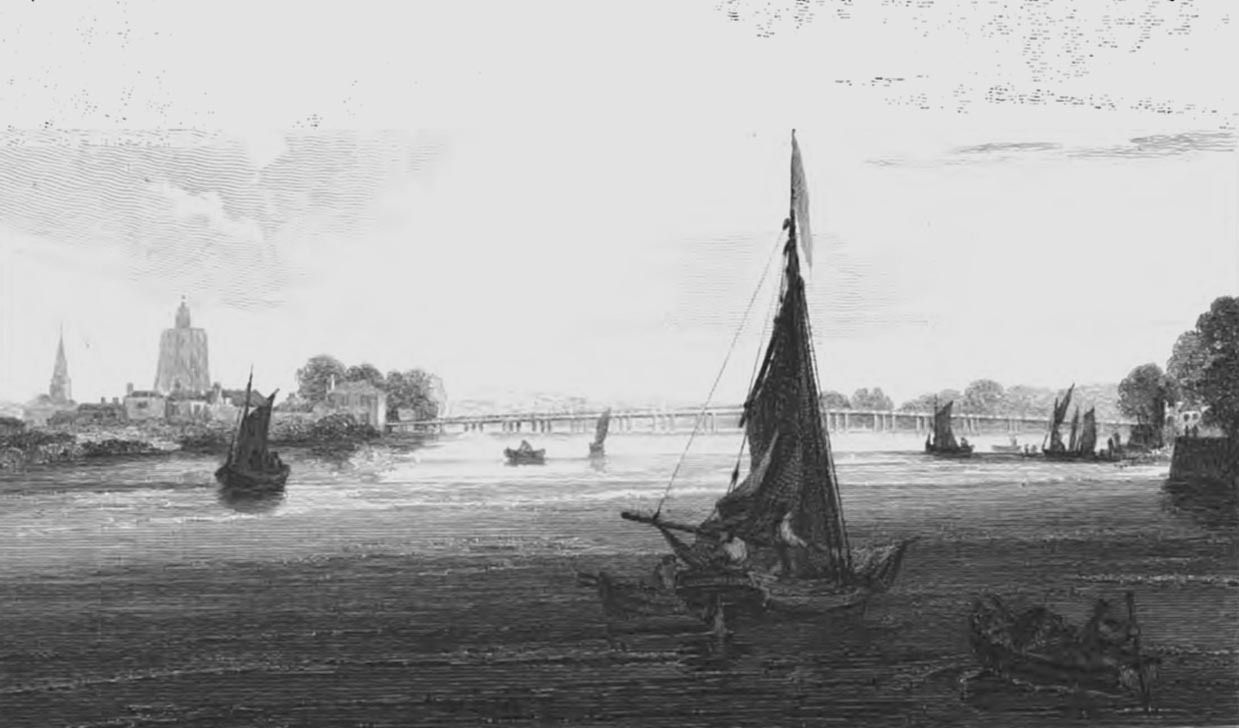 1819: L Francia made a drawing of a battered  hull on the riverside at Battersea.
1822: Cookes Views on the Thames copied L Francia's drawing and published it  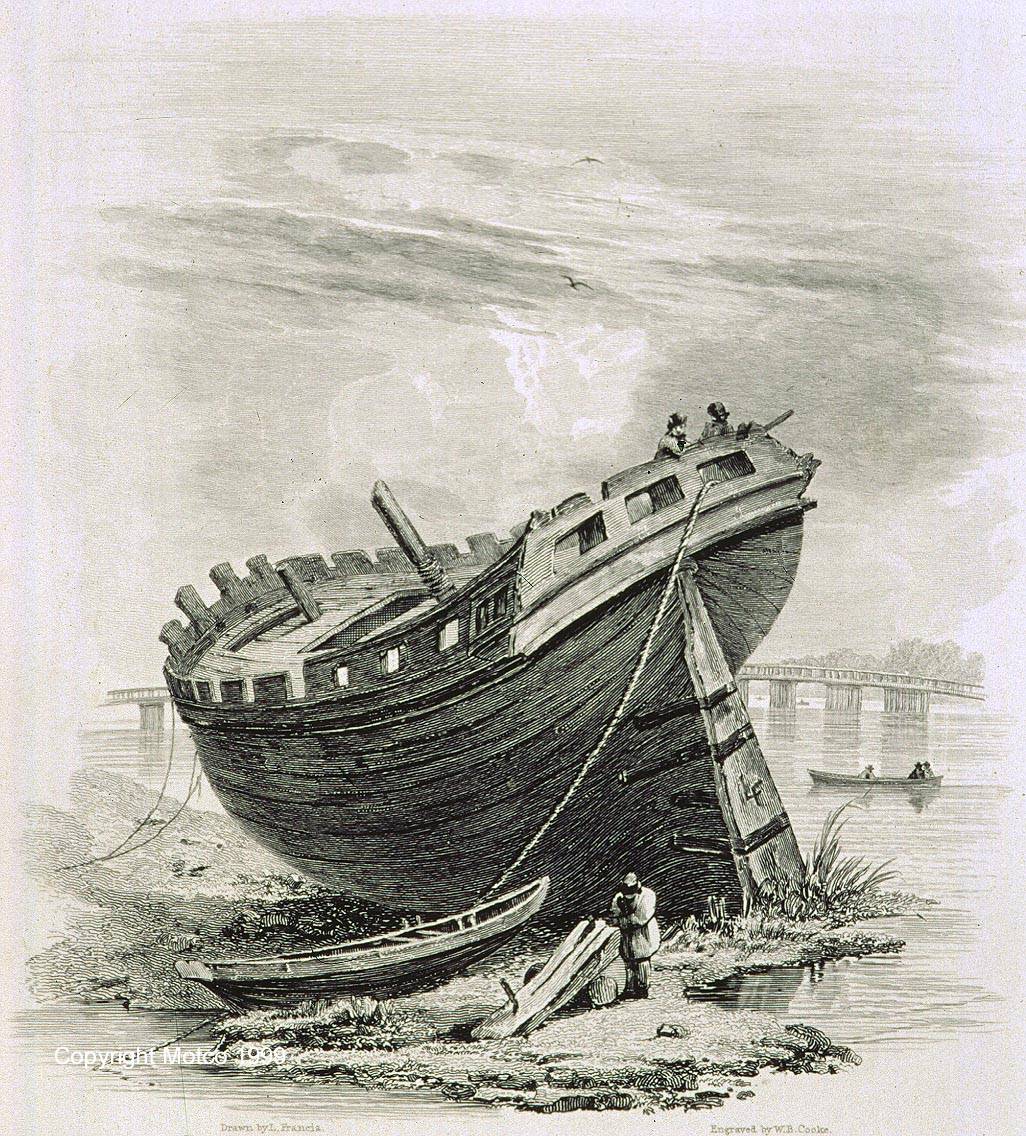 So why are we supposed to know the significance of The Little Belt?  It is not explained because in 1822 everybody knew what it meant
1801: The Danes built a small 460 ton corvette at Copenhagen, and named it the Lille Belt
1807: The Royal Navy, with sixty five warships and 29,000 troops, attacked Copenhagen, and in four days the city surrendered. The Royal Navy seized sixteen ships of the line, ten frigates, and forty three other vessels including the Lille Belt.  With the Great British ability to takeover other people's language (and ships) the Lille Belt was incorporated into the Royal Navy as HMS Little Belt.
1811:  HMS Guerriere of the Royal Navy offended the Americans by press ganging an American seaman.  The powerful frigate USS President was sent to oppose HMS Guerriere but, 45 miles off Chekaspeake Bay it was HMS Little Belt that she found.  Courageously (but probably not wisely) HMS Little Belt exchanged two broadsides with USS President.  She stood no chance at all.  Thirteen sailors were killed and nineteen wounded and the HMS Little Belt almost totally wrecked. 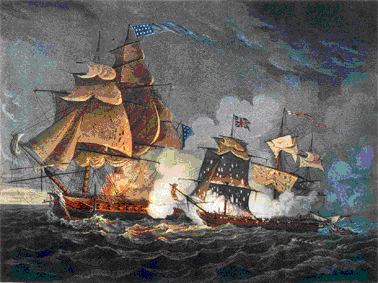 1811: The shattered HMS Little Belt was brought back to London and sold for breaking. She was taken to Battersea.

In May, 1811, an affray took place between the British sloop of war, Little Belt, capt. Bingham, and the American frigate President, capt. Rogers, in which the Little Belt suffered very severely.
By a Court of Inquiry held upon captain Rogers, it appeared decidedly, that the Little Belt was the aggressor, and fired the first gun.

On 16 May 1811, in what has become known as the Little Belt Affair, President, under the command of Captain John Rodgers mistakenly identified HMS Little Belt for the frigate HMS Guerriere while searching for impressed American sailors taken by the Royal Navy.
Though the sequence of events are disputed on both sides, both ships exchanged cannon fire for several minutes before Rodgers determined Little Belt was a much smaller ship than Guerriere.
Little Belt suffered serious damage and thirty-one killed or wounded in the exchange.
Rodgers offered assistance to Little Belt's Captain Arthur Bingham but he declined and sailed off for Halifax, Nova Scotia.
The U.S. and Royal Navy investigations each determined the other ship was responsible for the attack increasing tensions leading up to the War of 1812

If a vessel meet an enemy of even greatly superior force, it is due to the honour of her flag to try the effect of a few rounds; but unless in this gallant attempt she leave marks of her skill upon the larger body, while she, the smaller body, is hit at every discharge, she does but salute her enemy's triumph and discredit her own gunnery.

Which I take to mean that courage is no substitute for accurate gunfire.  The courage however was beyond argument.  I wonder if this is the origin of the phrase Little Belter?

Of all the broad rivers that flow to the ocean,
There's none to compare, native Thames, unto thee ;
And gladly for ever,
Thou smooth-rolling river,
I'd dwell on thy green banks at fair Battersea.

'Twas there I was born, and 'tis there I will linger,
And there shall the place of my burial be,
If fortune, caressing,
Will grant but one blessing.
The heart of the maiden of fair Battersea.

I seek not to wander by Tyber or Arno,
Or castle-crown'd rivers in far Germanie ;
To me, Oh, far dearer,
And brighter, and clearer,
The Thames as it rimples at fair Battersea.

Contentment and Hope, spreading charms all around them,
Have hallowed the spot since she smiled upon me 
O Love ! thy joys lend us,
O Fortune, befriend us,
We'll yet make an Eden of fair Battersea. 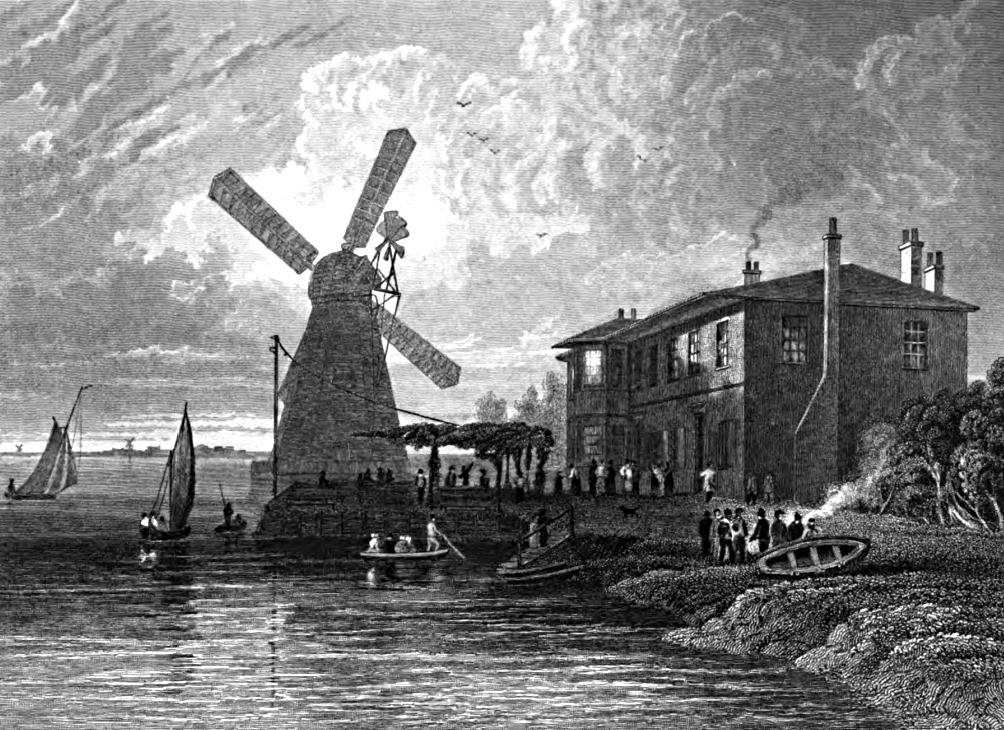 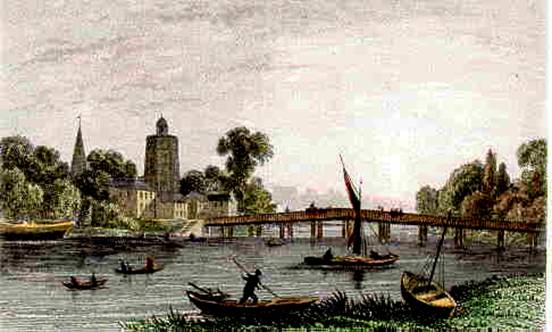 1844: [Click to see] Balloon at Battersea Bridge
That is a highly inflammable hydrogen Balloon just above the funnels of those three spark producing steam launches isn't it? 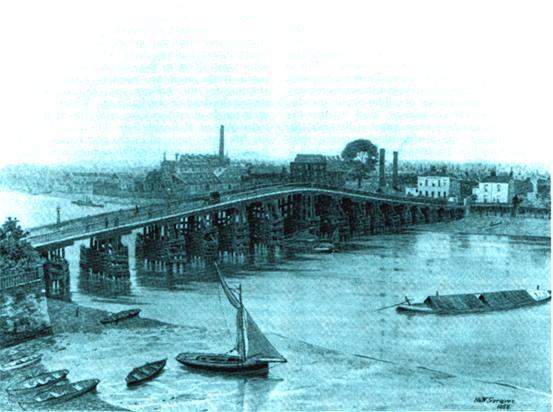 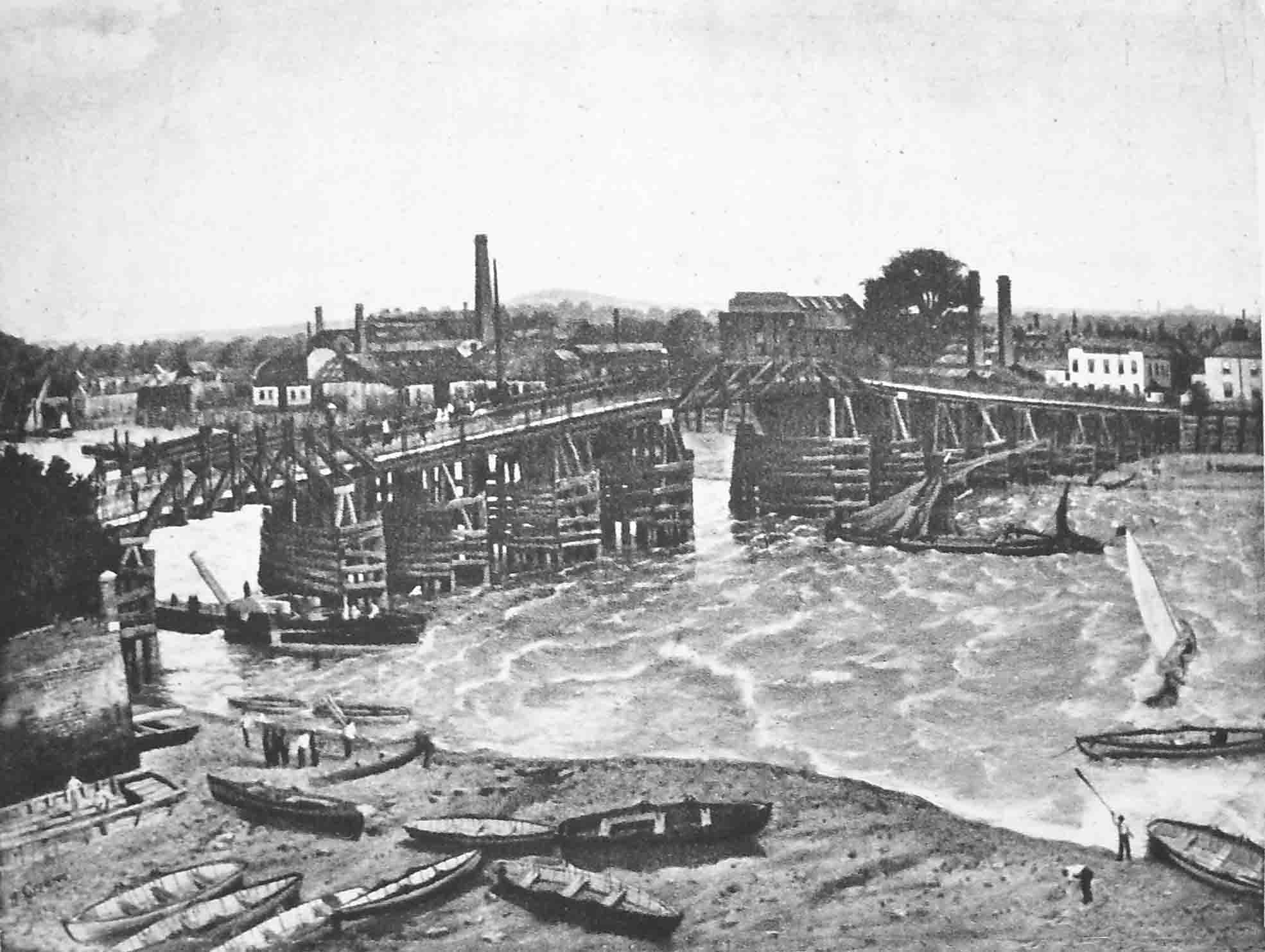 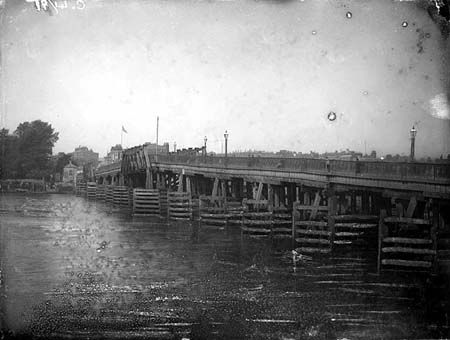 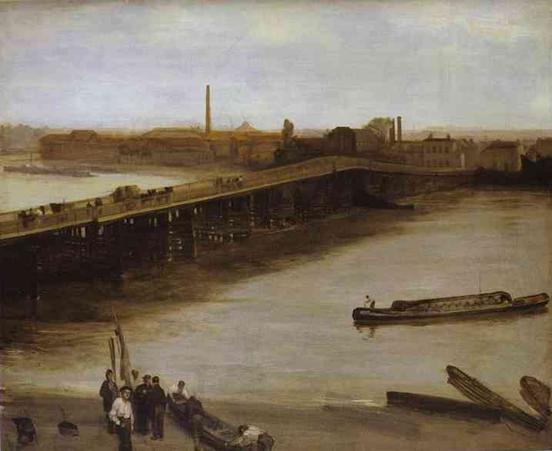 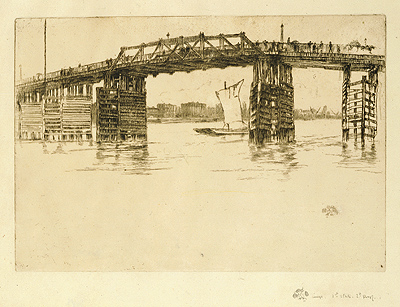 1885: Whistler wrote in a lecture that it was only the artist who could understand the teeming life of the Thames.
This is such poetic language that I feel I must show it as poetry
Listen to Part of Whistler's Lecture

And when the evening mist clothes the riverside with poetry, as with a veil,
and the poorer buildings lose themselves in the dim sky,
and the tall chimneys become campanili,
and the warehouses are palaces in the night,
and the whole city hangs in the heavens,
and fairy-land is before us
 then the wayfarer hastens home;
the working man and the cultured one,
the wise man and the one of pleasure,
cease to understand, as they have ceased to see,
and Nature, who for once has sung in tune,
sings her exquisite song to the artist alone,
her son and her master
 her son in that he loves her,
her master in that he knows her.

Some of the minutes of the company survive but provide very scrappy information. Building the [Battersea] bridge cost £10,200. One of the fifteen original proprietors was bought out by the others in October 1772 for £1,015, and the other fourteen had to put in another £150 then, bringing the cumulative total put in by each of them to at least £700, with another £50 paid in in May 1773. Dividends reported for the first few years, starting in December 1773, were in the range £30-£40 per share and £35 in 1795, which indicate a fairly low rate of return unless the £1,015 was much in excess of what each had contributed until October 1772. Much later, from 1821 to 1842 they averaged around £100 per share.
The proprietors were compulsorily bought out in June 1873 under powers granted in the Act authorising the construction of the Albert Bridge. They were issued with Rent Charges totalling £3,000, and in October £8,234 worth of Consols was divided among the then remaining thirteen full shares. Thus the proprietors ended up with a considerable income, but this came long after construction.

1885: Dickens's Dictionary of the Thames:

Battersea Bridge, an old decrepit structure, almost as much out of date as Putney Bridge, and about to be replaced by a new and more commodious structure. 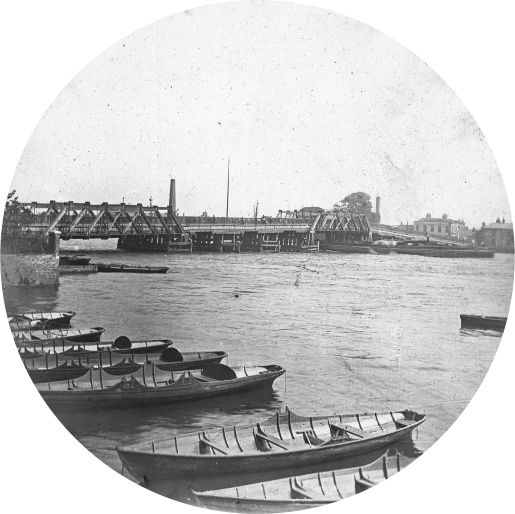 1885: First Battersea Bridge became unsafe and was demolished
1890: Current Battersea Bridge opened for the Metropolitan Board of Works
Replaced Henry Holland's wooden bridge of 1771:
670 ft. long. 55 ft. wide. Five spans, each consisting of seven cast iron arched ribs, support the 40 ft. wide roadway and two footpaths which are cantilevered out from the main structure. Ornamental shields in the spandrels and Moorish style arches on the parapet enhance the bridge's appearance. Engineer, Joseph Bazalgette. 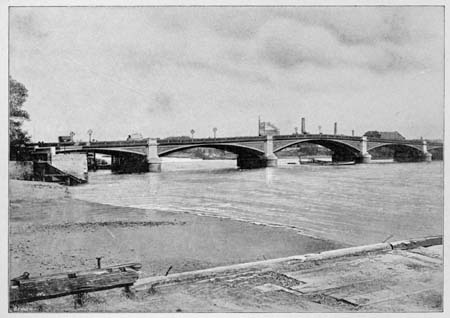 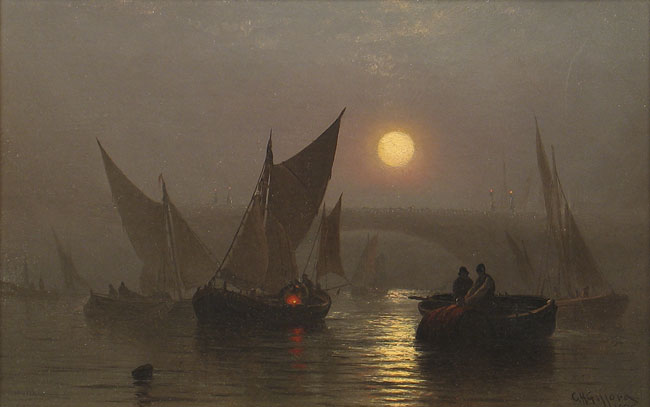 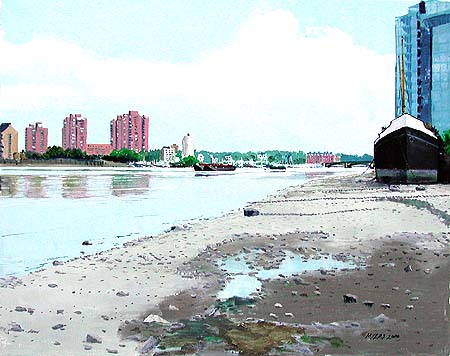 2006: A 19 foot Northern Bottlenose whale was found near Battersea Bridge in 2006. Despite active rescue efforts it finally died.

Lotts Road Power Station has a solid beauty of its own.

Lots Road Power Station was a coal-fired power station which supplied electric power to the London Underground system.
Construction started in 1902 in order to provide power to the Metropolitan Railway (now Metropolitan Line) and the Metropolitan District Railway (now the District Line) to allow them to change from steam to electric powered trains. Completed in 1905, it was claimed at that time to be the largest power station ever built. In continuous operation until being shutdown on 21 October 2002, power for the tube system is now supplied by the National Grid.
After that the property company which owned the site wished to convert the station into shops restaurants and apartments and to construct additional buildings, including two skyscrapers on the adjoining vacant land. Kensington and Chelsea Council refused planning permission for one of the towers. The other, which is actually the taller of the two, has been granted permission by Hammersmith and Fulham Council, but the developer was unwilling to proceed without permission for both towers, and the matter went to public enquiry.
The Planning Enquiry Inspector recommended refusal. However the Secretary of State granted permission on 30th January, 2006. (to be continued ...)